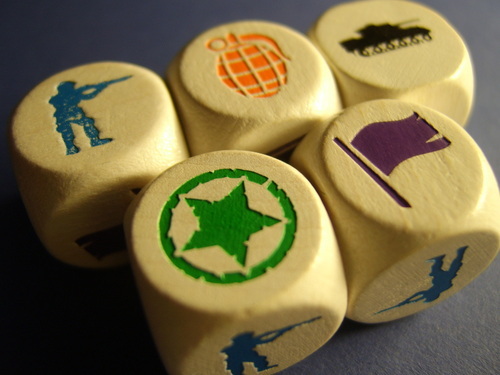 Memoir ’44 (M44) by is an eggcellent game by Days of Wonder, and is often toted as the best “Introductory Wargame” or “Wargame-lite.”  For those of you not in the know, it’s based on the Commands and Colors system by Richard Borg.

Commands and Colors: Ancients (C&C:A) and Commands and Colors: Napoleonics (C&C:N) are the only games that bear the Commands and Colors name, and are generally considered to be more heavy weight than M44.  I’ve played a fair amount of C&C:A, and found it to be in the sweet spot of crunchiness and simplicity.  C&C:A is pretty lacking in terms of terrain, but it does include a fun mechanic called “Battle Back” to increase the risk of attacking a superior unit in close combat.  It doesn’t have much in the way of effective ranged combat, unlike C&C:N, but it works occasionally.

In contrast, M44, like its cousin, Battle Cry, is very much about ranged combat, and has a much stronger focus on terrain.  There is no battle back, however.  For a game about taking and holding key terrain points, and with so many pieces of terrain disallowing attacking after entering, M44 punishes pushing forward and taking a hedgerow, town, or forest.

Too often, you’ll spend a whole turn moving troops into terrain to have your enemy roll flags on them the next turn, driving them out, and wiping them out.  Careful play can result in a tense stand off of chucking singleton dice at each other over the course of many turns, which stagnates the game and can get pretty boring and disheartening. Also, the poor star on one of the die faces is rarely used: 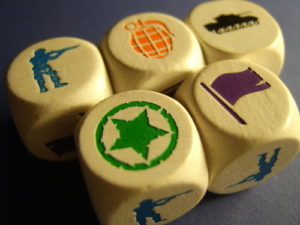 In order make the game more dynamic and to reward you for having the initiative and taking terrain in the mid-field, I propose a ranged battle-back system. I also liked the supporting unit mechanic from C&C:A, where if you have neighboring friendly units in two hexes, you can ignore a single flag, so I’ve incorporated elements of that into the rules. The result is a game where you’re encouraged to take and hold ground and keep your troops in coherency to support one another. You’re also rewarded for getting to the hedgerow first.

Okay. Here are the rules:

While it does seem like it might unbalance the game, in practice a player will lose only a few infantry models on average each game by using this system.  It does give players the feeling of being able to “do something” while under attack.   I feel that this models the increase in ranged weapon capability in the WWII era, as opposed to the lower-tech Civil War era of Battle Cry.  It also provides a use for the poor, under-appreciated star face.  It’s sort of like giving your men a medal for performing well under fire.

Anyway, I encourage you to try this system!  It’s a simple house rule, but it takes a bit of getting used to when rolling the battle back dice.

Other house rules we use in my regular playgroup include a nerf to the survivability of artillery:

If an infantry or tank unit is attacking an artillery unit in close assault, the star face counts as a wound.