Unternehmen Wacht am Rhein commenced on December 16th, 1944. I am replaying the so-called “Battle of the Bulge” aka the Ardennes Counteroffensive with Toki Redbeard. I command the US forces, he commands the Germans. We chose the 1965 version of Avalon Hill‘s Battle of the Bulge as our simulation engine. What follows is a record of the US side of events.

The US doesn’t get a choice in their initial unit positioning, but the Germans do.  There have been a number of strategies proposed for the initial German setup, but Toki Redbeard decided for the one below: 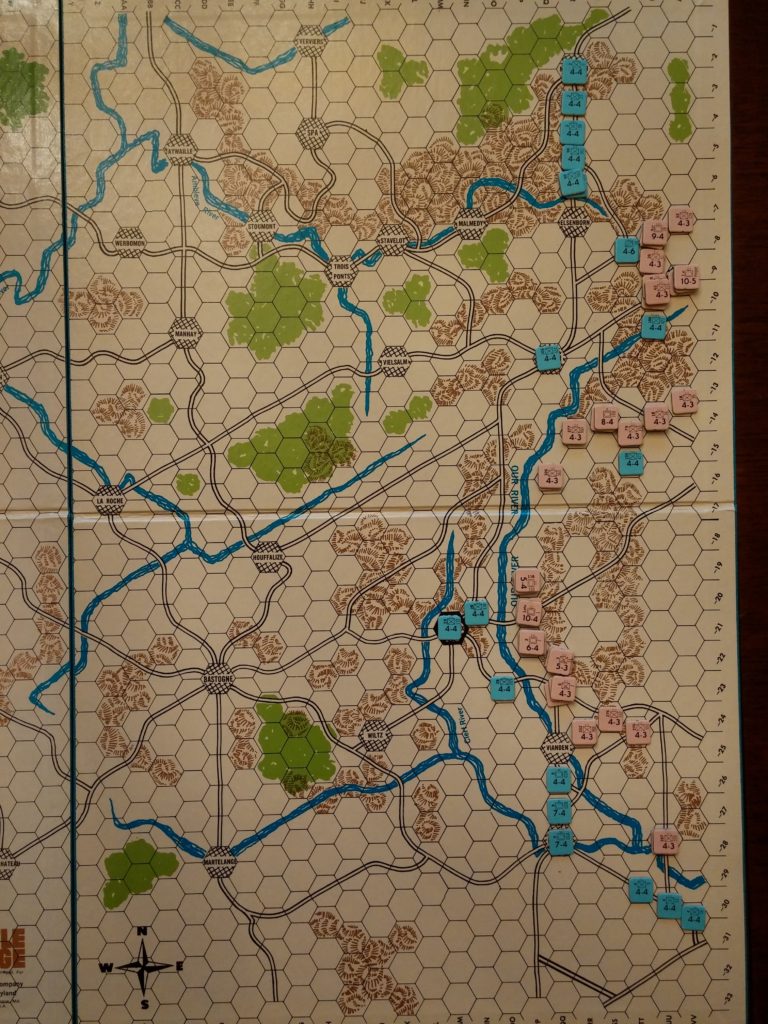 It seems that he opted for a strong river crossing, which is wise.  Once the Germans are across the River Our, I will have a tough time keeping them from racing towards Bastogne.   The US 2nd Division stands to hold Elsenborn in the North, but there are superior German numbers across the entire Ardennes front.    I stand to lose Diekirch, Vianden, Clervaux, and St. Vith on the first turn.  Not good.  I must keep the Germans on the other side of the River Our for as long as possible.   Toki has the armor and material to push through my lines quickly.  Elements of the 7th Armored are scheduled to arrive by the evening of the 16th, but only 3 company’s worth.  A few errors in setup on my part.  The 106/422 are supposed to be in TT-14, not TT-16.

Right off the bat, I lose the 14th Mechanized Regiment, the 110th Regiment of 28th Division, and the Combat Command Reserve Brigade of the 9th Armored Division.  Not a great start, but not the worst.  Elements of the 106th Division, the 422nd and 423rd Regiments, to be specific, put up a staunch resistance and have engaged wildly asymmetric forces.  The German advance is stalled in the North, but there is a wide-open gap across the River Our (remember that The 106/423 are actually out of position in the picture, they are engaged in TT14).

As expected, I’m driven out of Clervaux and Vianden, but I manage to hold St. Vith.  On my turn, I should reinforce the North and prep for the inevitable German breakthrough.

The engage results are very good for me, as they tie up large German stacks.  However, I _really_ need to plug the gap across the River Our.  I lost Clervaux, so I displace the 28/112 up to the gap in the River Our and form a loose cordon with elements of the 99th Division.  It won’t hold against a concerted assault, but I’m hoping the natural terrain will help me hold the line immediately north of Clervaux.

I split up the remaining combat brigades of the 9th Armored to cover the approaches to Bastogne and Wiltz, respectively, while the 2nd Division holds Elsenborn and the 4th holds Diekirch.  All is not lost but I need more material to plug the gap.  We will see how I weather the storm in the afternoon and evening of 16 Dec 1944.