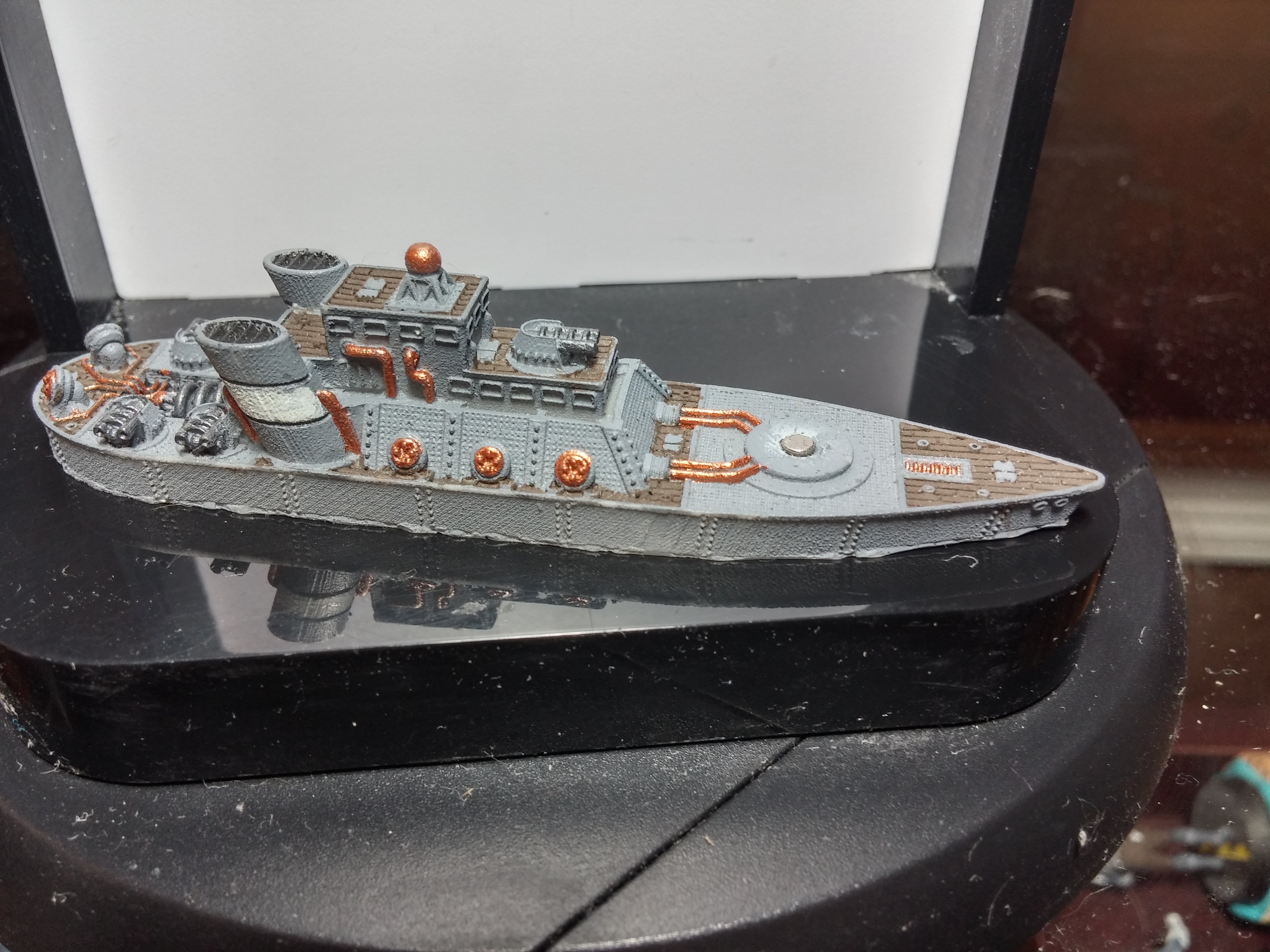 This post is sort of a hobby progress report as well as a reflection on the vagaries of available hobby time. I really need to stick with a single project so I feel like I’m actually making painting progress. Lately, I’ve been working on my Prussian Empire ships for Dystopian Wars, mostly because I got really tired of painting boots on Nomad Wildcats. It’s been pretty tough trying to find time to paint, but I’m trying to get in a 20 minute session a day, which usually turns into an hour or so of painting. My new workbench has been pretty helpful for that, as you can see here:

I just leave my models out with my dirty brushwater and wet palette (the covered Pyrex tupperware, top right), and sit down when I have a free moment to paint. Aside from the buildup of a little dust and dog hair, they’re pretty unmolested day-to-day if life gets in the way.

I chose a pretty true-to-WWI color scheme for my Prussians. I left the decking brown, since it’s wood (unimaginative, I know), and the rest of the ship is just grey. To try to adhere to some sort of “camouflage” scheme, I used a darker grey near the waterline and on the top-down parts of the superstructure, but kept a lighter grey on the other parts of the superstructure. In practice, you definitely can’t tell whatsoever, but the grognard in me knows and is pleased by this. Since the Prussians are all about their Tesla coils, I wanted them to stand out on the models, so I picked out the electrodes in one of Army Painter’s bronze metallics.

Credit for pic goes to lfgdating.com

Apparently, unit markings were painted on ship smokestacks in yellow during WWI… which means I have to paint yellow things on models. If you’ve never done it, there’s a reason why professional model painters charge more for yellow models–it sucks to paint. I’ve found the best recipe for success is to basecoat white over your primer and then paint your yellow over that. 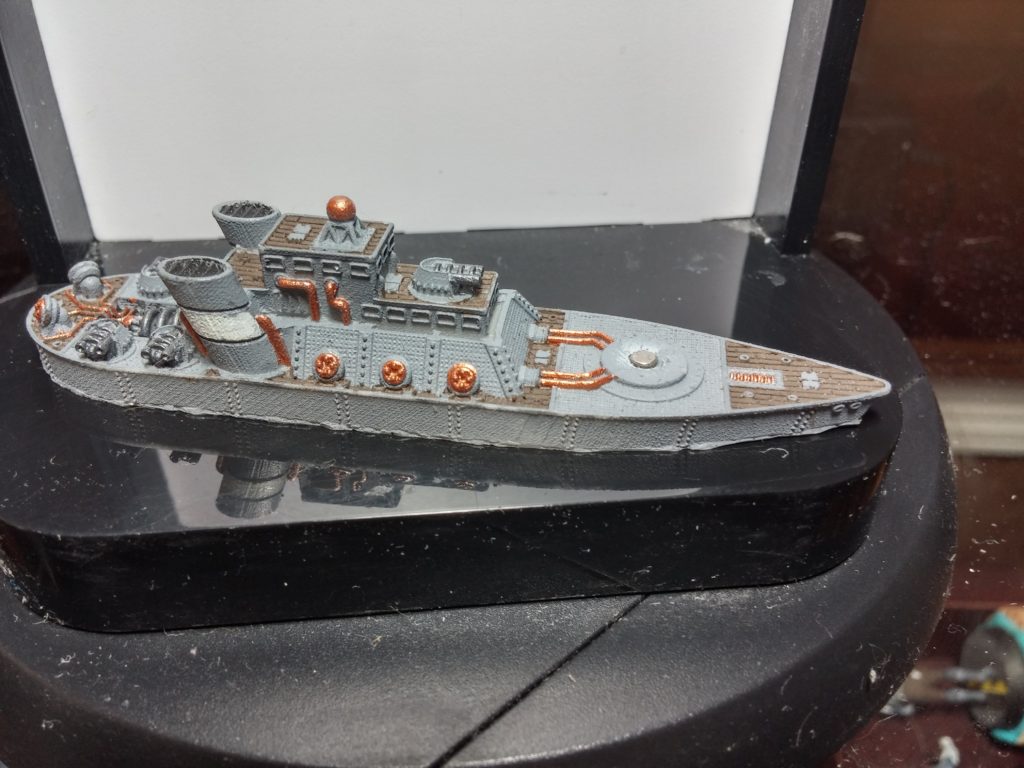 Here’s a WIP shot of my Reiver-class cruiser.  I still haven’t finished the basecoat of white on the middle smokestack section, and there are a lot of other details that haven’t been picked out yet either. Nevertheless, you can get the general idea of what I’m trying to do. I’m still not certain on what I want to do with the bajillion windows all these ships seem to have.  I definitely need to get more contrast into these models as well by picking out more details, this is still very much in the still-basecoating stage.

These two Arminius-class frigates show the difference between an early-stage WIP and a late-state WIP. I’ve added the yellow stripe–painting yellow takes you back to kindergarten when you can’t paint in the lines anymore, and washed the bronze pipes or whatever they are to mute the colors and get a “weathered” look. I’ve picked out the gun turret armor in a dark blue, which is a bit too close to the grey to stand out, but… maybe I’m okay with this. The grognard in me hates the idea of painting a bright color on a ship that is ostensibly supposed to be camouflaged, but maybe I’ll change my mind.

I still need to drybrush some highlights onto the foreground Arminius, and possibly pick out some of the plating in a metallic color. It’s already had its deck boards and plating washed, soo I’d say it’s pretty close to done. I might try to clean up some of the yellow on the smokestack, but it is really really frustrating painting yellow. Kinda makes me wish I had started by painting the white all over the smokestack, which you can see is exactly what I did on the rear frigate.

I’m really liking the way the rear Tesla coil thing has turned out. It’s got that steampunky mixed-metal feel to it. I will probably try to highlight up some of the edges of the contraption in a lighter silver metal. This view also shows the boring-ness of the windows on what is presumably the bridge of the frigate. I’ve put some light blue on the window panes, but clearly that doesn’t do much to the contrast. Maybe I’ll edge the window panes in black, just to underscore their existence?

I think the thing to take away from this whole painting exercise is choosing a color scheme that “mimics” real world color schemes results in pretty bland looking models. Comparing against the SMS Gefion (yes yes I know it’s pre-WWI), just as a straw man, my scheme is arguably more interesting, but it still doesn’t pop on the tabletop. 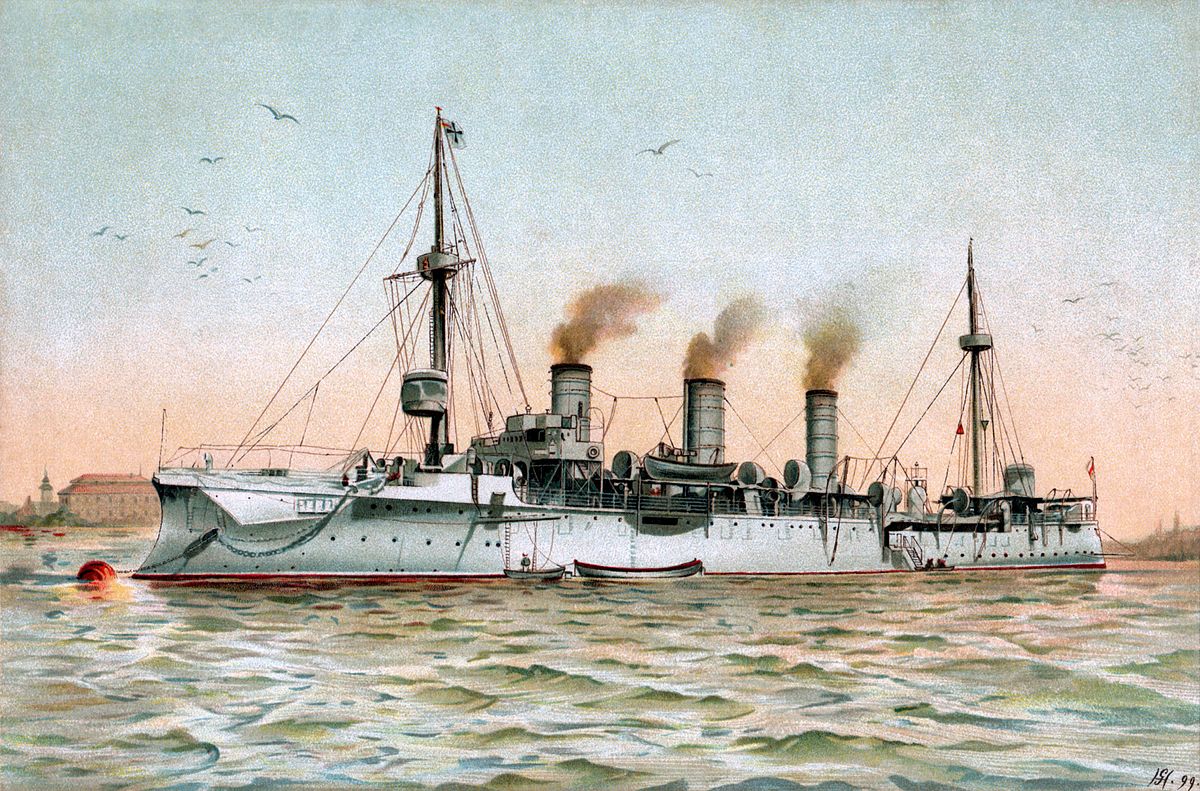 This would all go much faster had I had my airbrush setup before starting to paint these models. I bought a bunch of Vallejo airbrush stuff for the next project… We’ll see how it goes.  Thanks for reading. 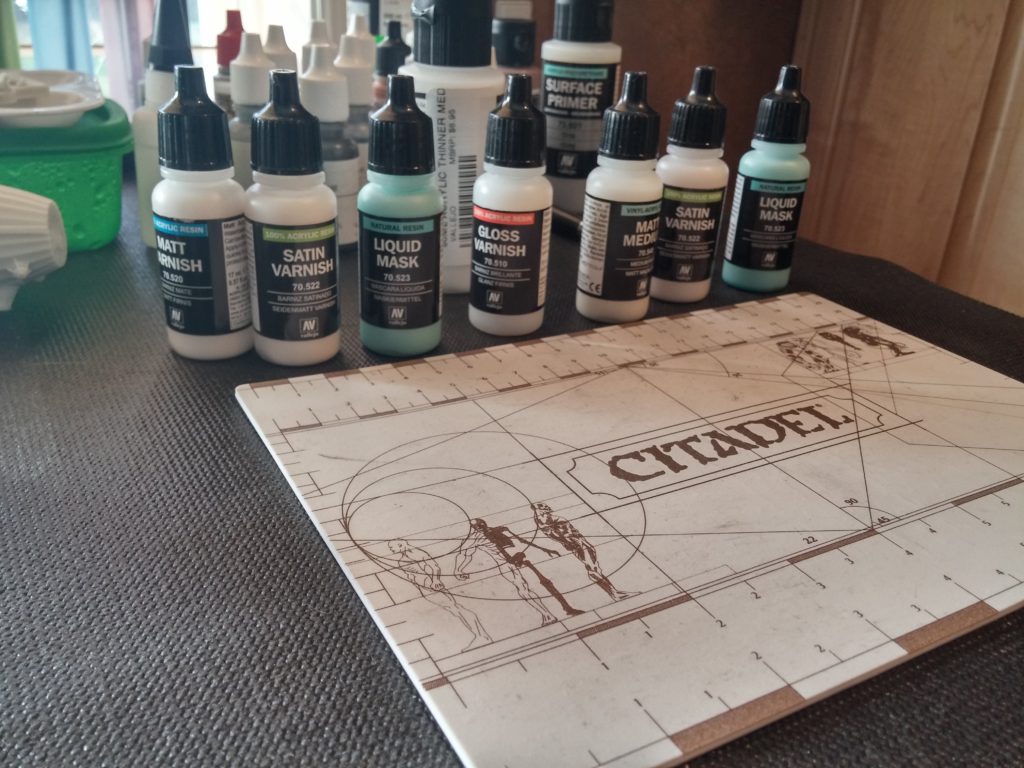