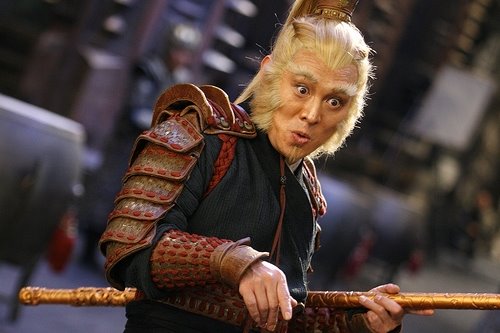 So, Adam and I regularly bounce list ideas off each other, so there aren’t generally many surprises when we see each other across the game table. I think it’s a good exercise to get better at the game, so you can really boil the challenge down to what’s going on the table as opposed to trying to build and all comers list. I had specifically designed the list I played this game to cover three things, in light of the upcoming tournament in which we’ll be playing Annihilation, the new Unmasked mission, and Show of Force.

I’ve got a list that I’m pretty happy with for Annihilation that I playtested with Adam and Isaac, and I figured my second list would have to cover the other two missions. So basically the list has to work for Unmasked, Show of Force, and be able to deal with an Avatar, because I know Adam is bringing an Avatar to the tournament. I cooked up what you see below, and I’m pretty happy with it. After relaxing with a beer or two, Adam and I got paired up at game night and started unpacking our models.

I won the roll off, barely, thanks to Adam’s roll of an 18! I chose to go first against the Avatar, so Adam made me deploy first. Table sides didn’t look particularly relevant, so we just got the sides that our beers were already on. Even though we list build together frequently, I’m never 100% sure of what Adam’s going to bring, so I tried to halfheartedly prepare for a Fraacta or a Speculo while simultaneously prepping to get up the field. The key thing was predicting where Dr. Worm and the Avatar would be. Adam forgot to remind me that I couldn’t hold a reserve, so I held Bran in reserve. 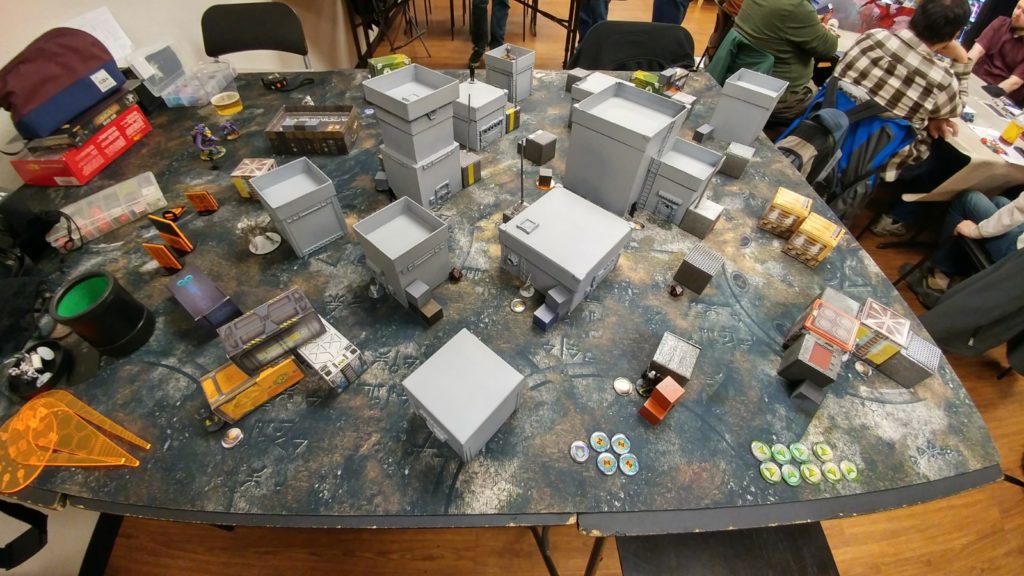 I really didn’t know where the Avatar would be, so I put the Prowler in the middle, my Zero AHD on the left, and my Zero DepRep on the right, figuring that I could get an AHD and flamethrower in range no matter where Adam put the Avatar. I backed up the Prowler with my Moira E/M LGL, and stuck the Clockmaker in the back right. If Adam spent time digging him out, that’d probably be a win. I put my Iguana on the left and backed him up with the Clockmaker’s bot and my Interventor HD+. The KHD went on the right, ready to advance up the field and pretty exposed…

Adam’s turn. He castled up a pair of Ikadrons on  his left, with the additional protection of an R-Drone. Anyat and his Nexus hacker hugged some buildings in his midfield, with Bit & Kiss and a Krakot on the right to protect them. Dastardly Dr. Worm flopped about prone on a roof in the middle of Adam’s deployment zone, so Bran came out of reserve just a super jump away. It’s at this point that Adam remembers that I shouldn’t have had a reserve, curses a bit, and then sets about finding a spot for the Avatar to go that’s far enough away from Bran. The Avatar ends up near all the Ikadrons, which do a great job of protecting his back and flanks. 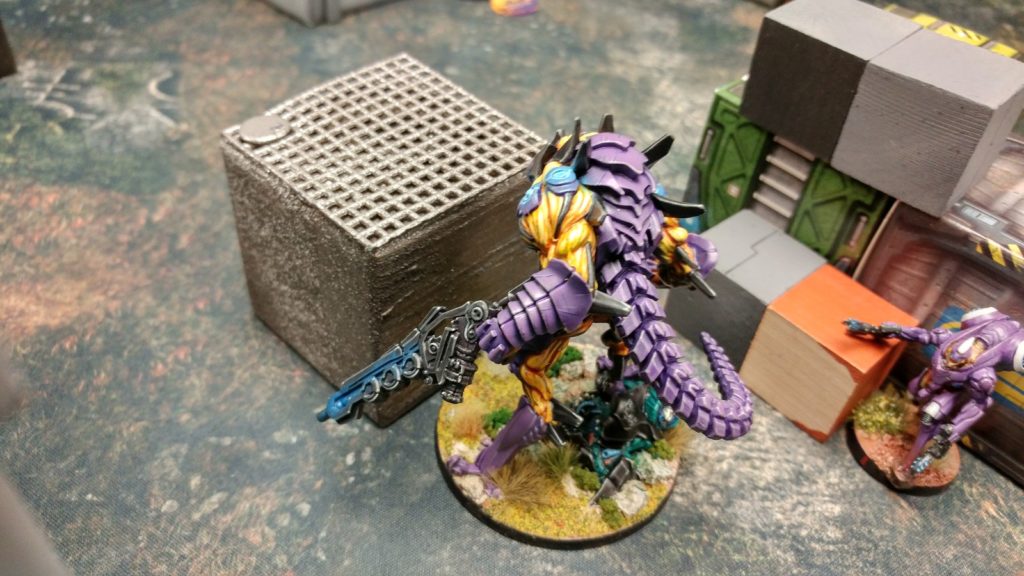 The Q-Drone comes out of reserve too, watching my Iguana. 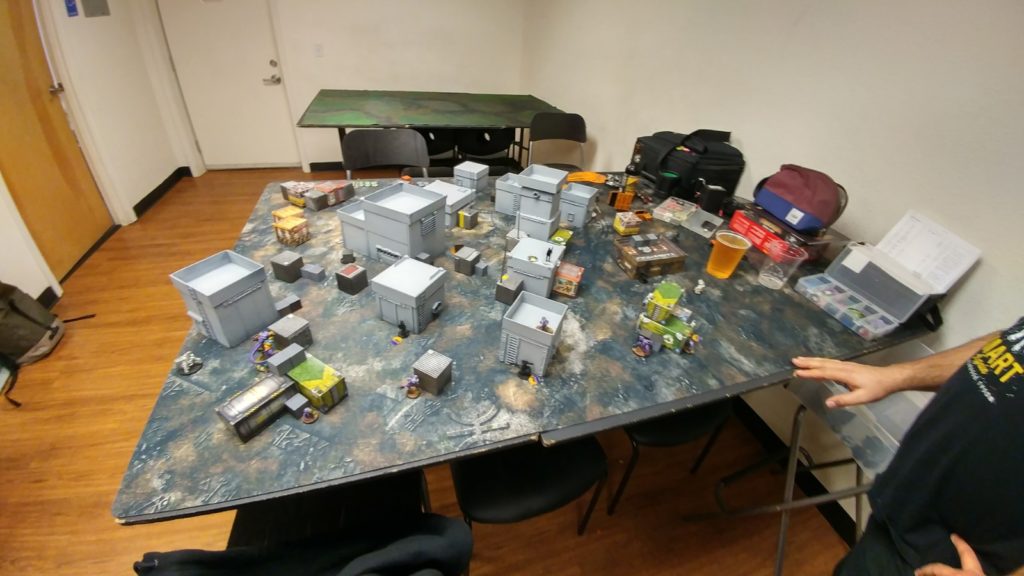 Well, I’ve said it many times. Step one of any game against Combined is to kill Dr. Worm. Bran has ONE JOB this whole game, and he sets up for some Monkey King Mischief. I super jump his camo token onto Dr. Worm’s roof. Unfortunately, he’s discovered by something on the way. I move him into base to base contact, and Dr. Worm takes a shot with his combi. Figuring that the best option would be to roll two dice, I boarding shotgun Dr. Worm…. and roll 5, a 2, and immediately get crit. ONE JOB, BRAN. YOU HAD ONE JOB. 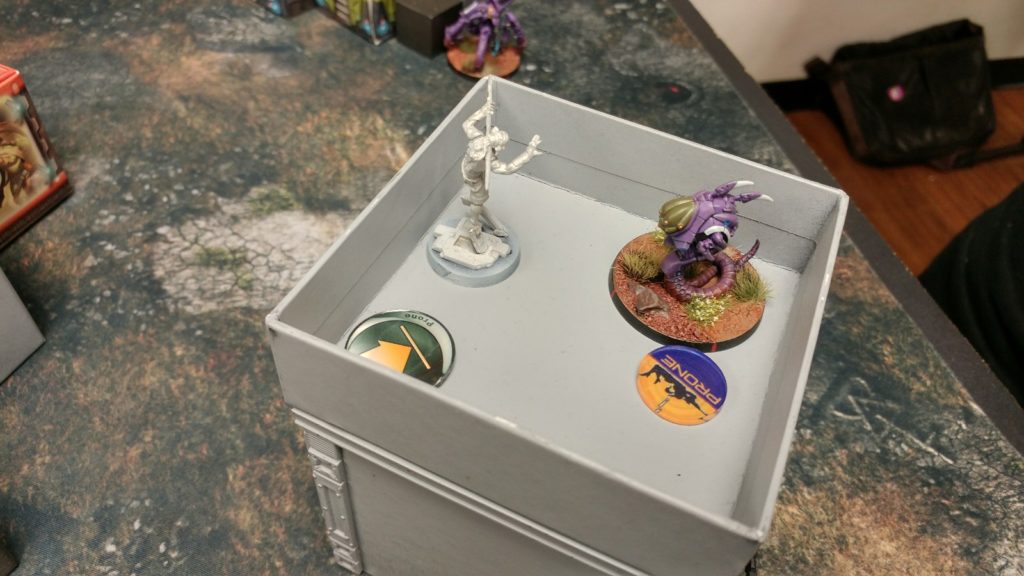 GRAGH! Stupid frigga fraggin Dr. Worm flippin fiddle faddle bo jangle Dr. Worm!!11!!1!eleventy-one!! Ahem. Nate came over from his game to see what all the commotion was about, and mentioned that MA3 is probably better than boarding shotgun as an attack… and he was right.

What we’ve learned today is that smacking Dr. Worm in the face with Bran is better than shooting Dr. Worm in the face (why not both!? That jerkface deserves it! Floppin’ around on the roof. Grumble.). In retrospect this makes total sense. Well, I have work to do, no sense in crying over spilt milk… I’ll show you spilt Dr. Worm guts! Grumble grumble. My Zero DepRep is the closest trooper to the Avatar, so I set about making things miserable for the TAG. I advance Acid Burn the Zero across no man’s land, getting discovered on the way to total cover. Acid Burn knocks out an Ikadron well out of flamethrower range and then scoots around the corner a bit to gun down Treitak Anyat, I drop a repeater and then an E/Mauler covering the Avatar. The Nexus dodges around like a breakdancer while this is happening, but I just ignore it for now. 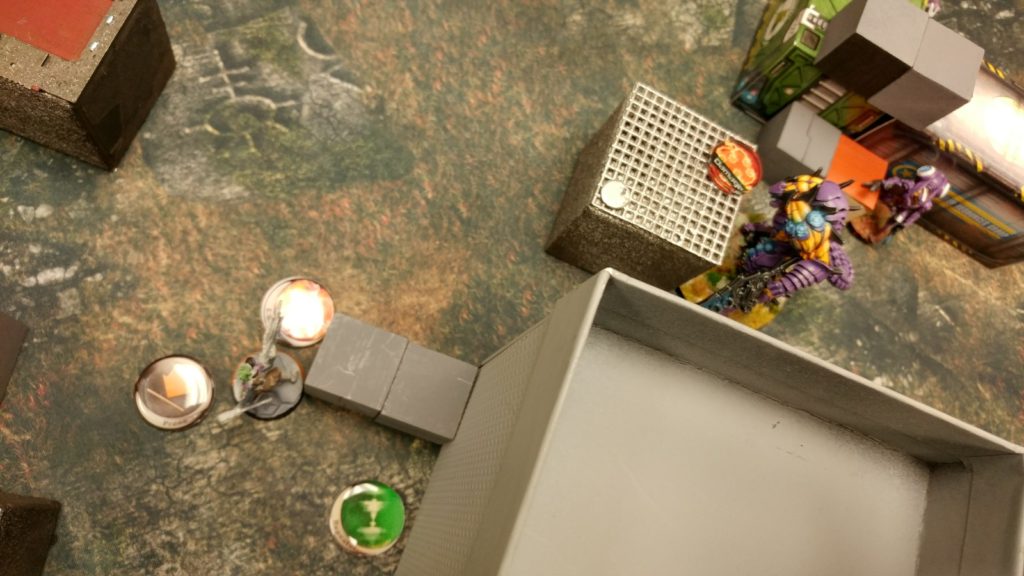 I spend my Lt order to try and Oblivion the Avatar. Adam fails his reset and the BTS roll against the E/Mauler, and then fails his BTS roll against Oblivion. Okay, Avatar is out of the picture temporarily. I try to get rid of Adam’s Q-Drone with my Iguana, but just end up taking a wound instead. Rather than push my luck with the Q-Drone, I take a few pot shots at Adam’s Nexus operative with Acid Burn, but she whiffs and that’s that. 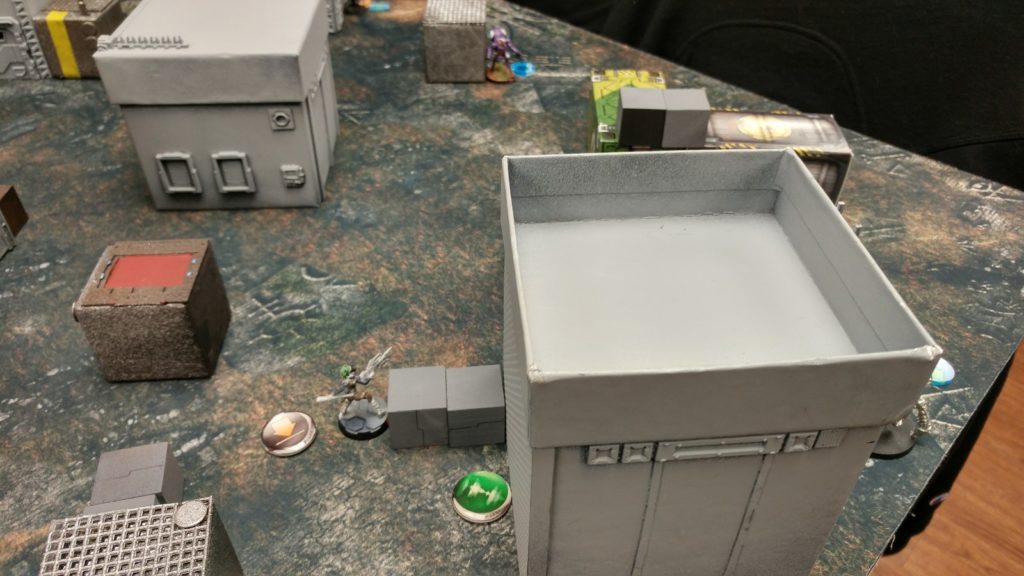 I leave Acid Burn with her butt hanging out because I want to catch Dr. Worm’s bot on the approach to the Avatar, and pass the turn.

Well, Adam’s in Loss of Lieutenant thanks to the Avatar being isolated. He spends the remaining Ikadron’s irregular order and pushes it into LoF. I dodge, expecting a double flamethrower to the face. Surprisingly, Adam just flash pulses, presumably to get the F2F roll… I dodge successfully and my hackers Oblivion the Ikadron. What I didn’t realize is that now the Avatar and the Ikadron block line of fire to Dr. Worm’s little slave drone! Adam runs it up safely and fixes up the Avatar, but I Oblivion the slave drone, disconnecting it from Dr. Worm. The Nexus tries to gun down my Zero, so I offer Acid Burn up to the dice gods and drop an E/Mauler covering the newly fixed Avatar. The range and camo mods are enough to block all but 1 hit, which Acid Burn tanks with a 15, scooting around the scatter terrain to safety. 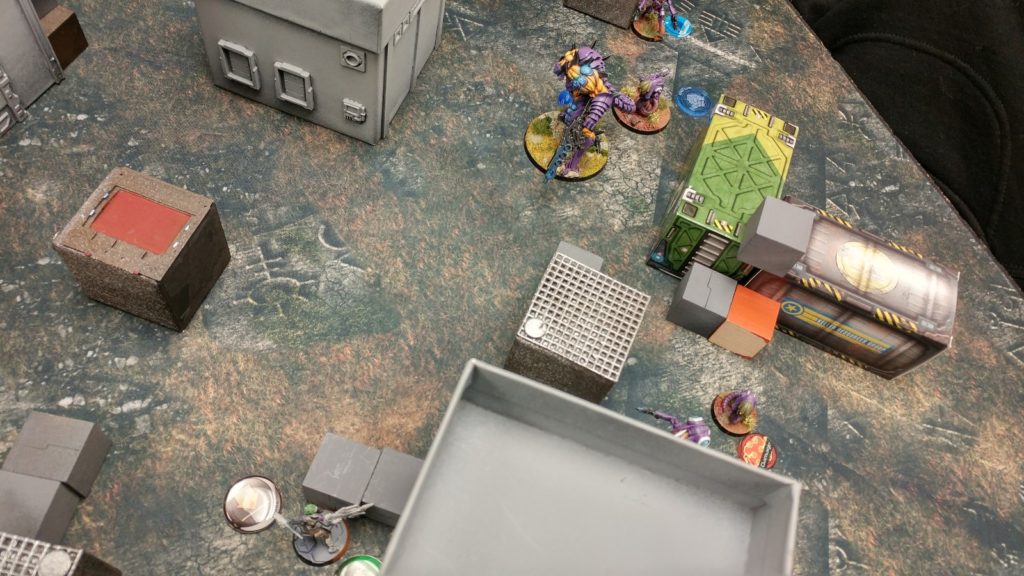 Adam tries to get the Avatar away from this pile of sad things but takes an E/Mauler to the face again, failing the BTS roll on a 1! I Oblivion again, but we don’t bother rolling since the Avatar’s already Isolated. Adam’s now forced to slither Dr. Worm off his roof to fix the Avatar, blowing through all of his command tokens to do so. Sadly, I don’t have a shot on this. With his last order, Adam throws the Avatar into suppression, now outside of repeater range. Drat!

I recamoed both Zeroes with a coordinated order and spend another one to move the Prowler, Moira, Iguana and Zero Dep Rep (Acid Burn) up the field. Acid Burn sneaks past the Isolated Ikadron, the Avatar, and the R-Drone to drop another repeater to cover the Avatar. 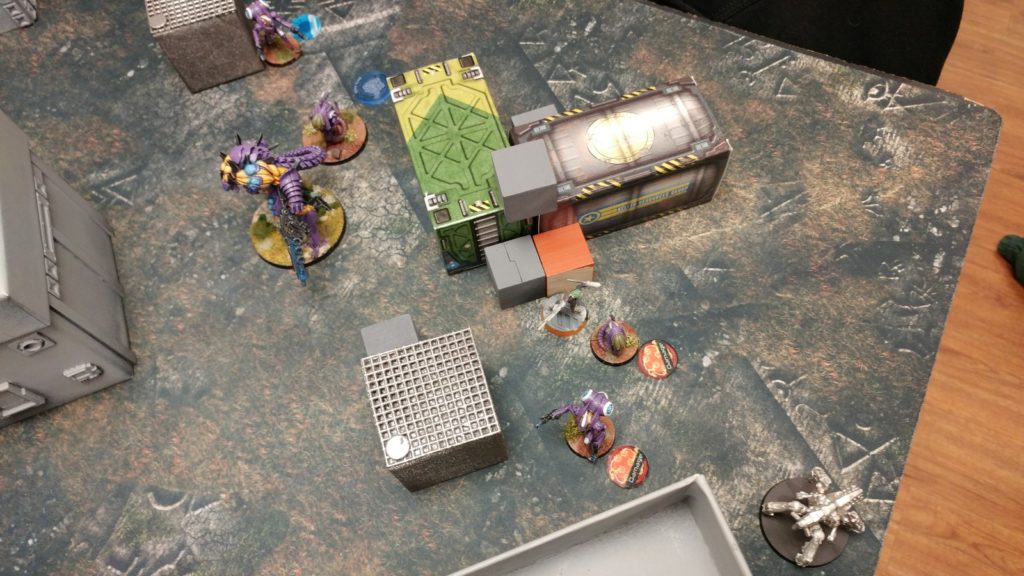 I hack the R-Drone with my Lt order, immobilizing it, and drop an E/Mauler covering the Avatar. Now, here’s where I make a huge mistake. I shoot the R-Drone with Acid Burn’s combi, which kills the R-Drone and sets off the E/Mauler. While this does successfully immobilize the Ikadron, I had hoped to use the E/Mauler on the Avatar! DUMB!  That’s my last one too. I sacrifice Acid Burn to finally take out Dr. Worm by shooting him repeatedly in his tail until he’s a mess of goo.

Mission accomplished! The Q-Drone does take out Acid Burn though. Worth it! With my last few orders, I move up the Moira and the Prowler to cover the Avatar. 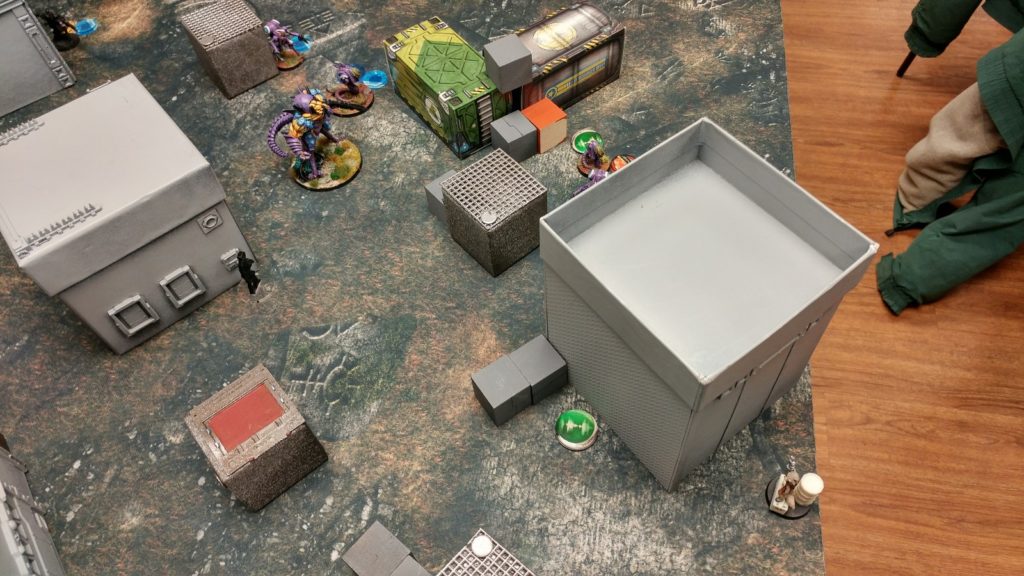 As an afterthought, I bring in the Cube Jager covering the Avatar’s advance. I’m using my Pi Well proxy here, as I haven’t built my Cube Jager yet. 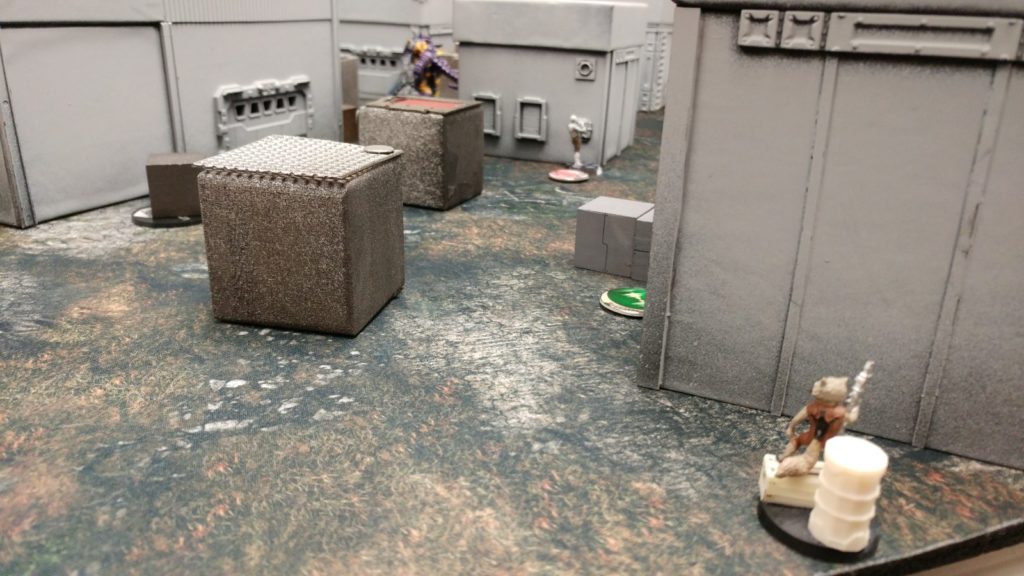 The Avatar moves towards the central objective, taking a flamethrower hit from the Prowler on the way. I fail both hacking rolls, sadly. Bit and Kiss move up a little, with Kiss covering my Iguana’s approach. The Avatar moves again, and I fail a bunch of rolls against it. The E/M LGL, Prowler’s ADHL, and two hacking attempts both whiff, but the Prowler goes down to a hail of HMG fire.

The Avatar keeps on trucking, splitting burst between the Moira and the Cube Jager’s E/Mitter, gunning down the Cube Jager and then in the next order Sepsitorizing the Moira. 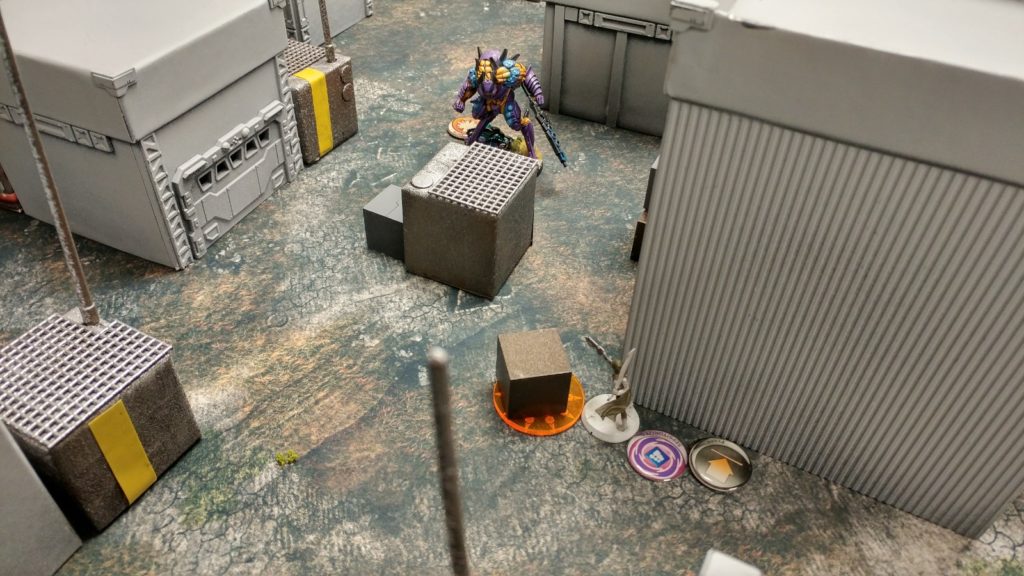 My Iguana is out of position and exposed, so I lose it to more HMG fire, ejecting the operator to safety. Was too lazy to dig to the bottom of my bag for the Iguana operator model so I just used my Wildcat Spitfire which was lying around from an earlier discussion of painting techniques.

Thankfully, Adam was out of orders so it was my turn.

I’ve only got 5 orders left, and I need to get another repeater on the Avatar. I take out Kiss, who’s covering the central area, with the Iguana operator and move the KHD Interventor up behind the Sepsitorized Moira, throwing out a Fast Panda as I do so. 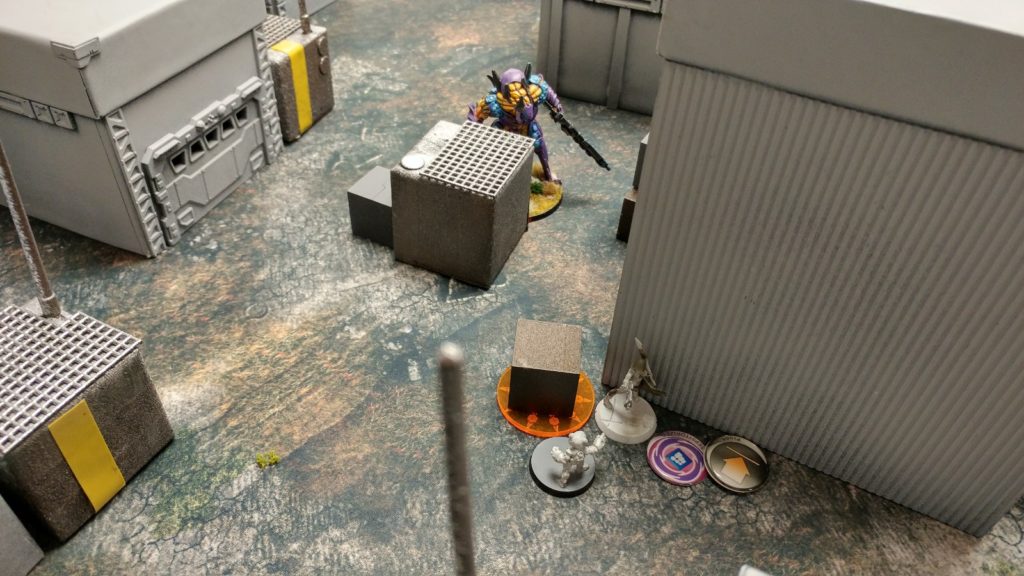 I try to boarding shotgun down the Moira, since she’s scoring, but she had spun around already and gets a hit through with shock ammo. If only Interventors has Bioimmunity! I try to Oblivion the Avatar and HMG it with my last few orders, but nothing sticks.

Bit takes out the AHD Zero via a Pitcher, and then Adam just walks the Avatar into B2B with the central objective, winning him the game. 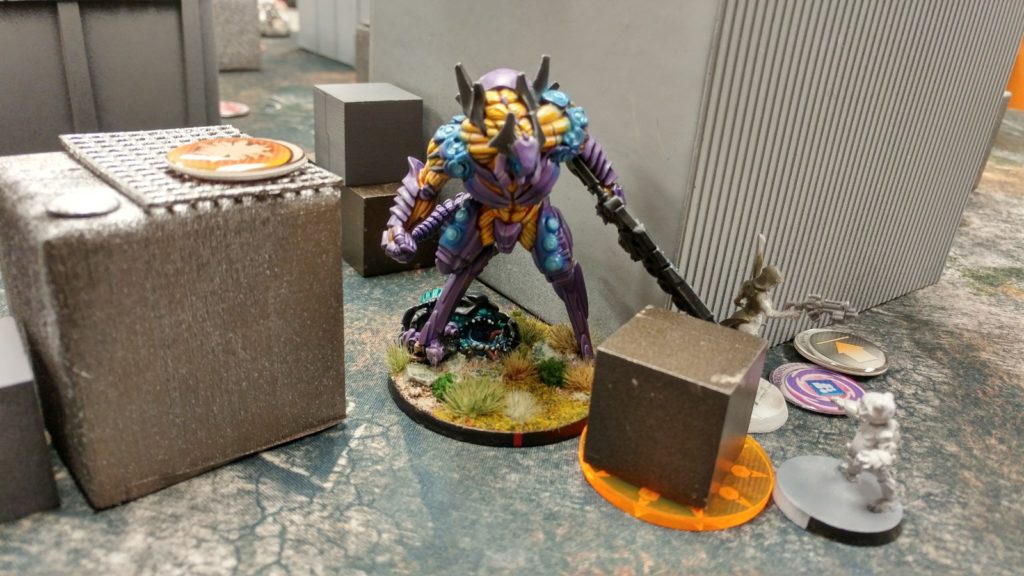 Really though, it was a 3-10 Nomad Victory because I killed Dr. Worm! HAH! Take that, Adam! In Dr. Worm’s slimy gross face! 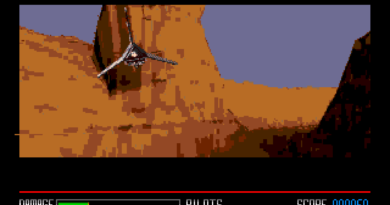 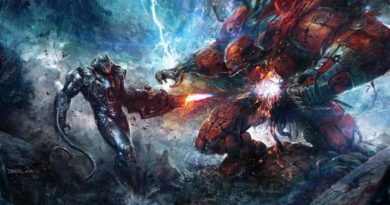