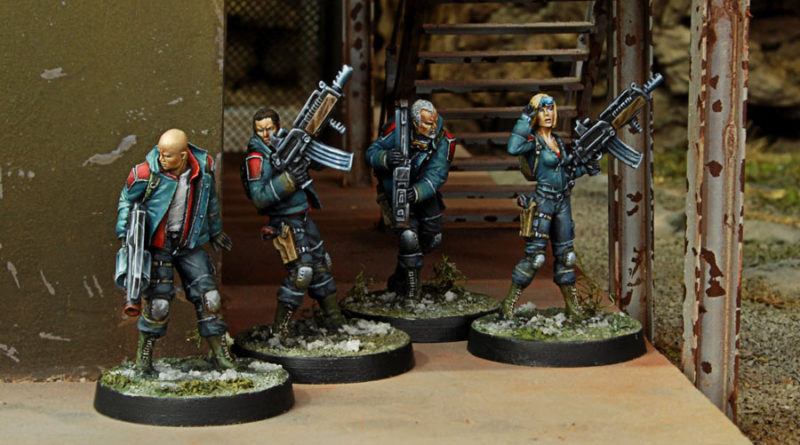 We’ve come full circle! When I first got into Infinity I had wanted to start with the French, but my buddy had bought his models first and started with Caledonia, so I went with my second choice–Corregidor. After many years of adding FRRM models to my shopping carts online and letting them languish in there before losing the session ticket and the shopping cart, I finally bit the bullet and hit the “checkout” button!

A solid Sunday of filing, cutting, and gluing later, I’d put together a reasonable pile of French that I felt could handle itself on the tabletop. I had to do a little proxying, because there just aren’t enough Chasseur sculpts (I’m fixing that, thanks to Hasslefree), but for this game I just used a Moblot and Margot to round out the rest of my Chasseurs. AVA 4 is pretty great! This is also my first game against Steel Phalanx, I believe, so new stuff all around!

Adam has planned an Escalation Tournament of The Grid at 200, Rescue at 300, and Comms Center at 400, just to make things super gross. As I was clicking about in Infinity Army, it occurred to me that FRRM is pretty well suited to The Grid, even at 200. We have plenty of infiltrating D.E.P.s and D-Charges, although Duroc doesn’t have a DA CCW, so Mirage-5 was out. The Zouave FO is basically custom-built for The Grid–the only ways he’d be better is if he had a Panzerfaust for the extra ammo or came with D-Charges too. I threw together a few lists and finally settled on the one I played against Erik.

I flubbed the roll off hard, with an 18. Erik rolled a 10, and gamely checked his list to see if it was a success before we both realized that there probably aren’t any Lt options with a WIP of less than 10, hah! In any case, he decided to go first and so I gave him the worse deployment zone–I thought I could exploit that with my infiltrating Metros.

He put down his Ajax/Myrmidon fireteam on his right, spread out behind some terrain. He put an Agêma ML on top of the terrain, hidden behind a box–he later mentioned that he was afraid of Duroc eating all his guys so he hid them, and then dropped two Netrods that scattered into the back left of his deployment zone–my right. Finally, he dropped a pair of Thorakites FOs on the table, one in front of his fireteam and one sort of in the middle of his deployment zone. His Dragon Lady HVT was pretty close to my deployment zone on the left, so I put my fireteam and its LGL Metro there, being really careful to keep them all out of a ML template of each other. 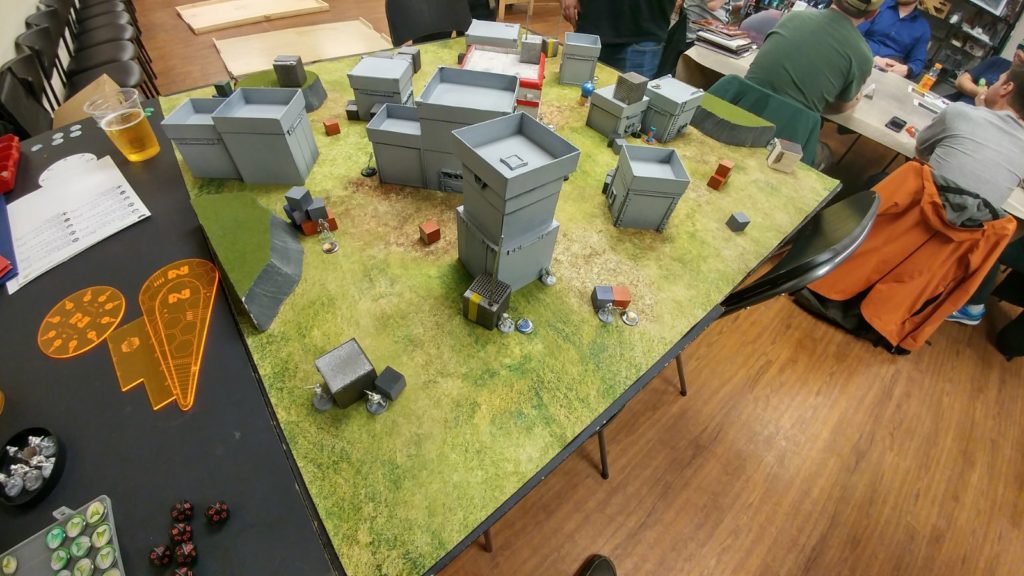 I had a bit of a tough time figuring out where to put all of my Chasseurs. I ended up putting on FO Chasseur on the pair of grey buildings on the right, with my D-Charge/ADHL Chasseur right below her near the blue sphere objective. My other FO Chasseur went in the middle, to make sure I could get some more coverage of the board, and my vanilla Chasseur went on the left in case I wanted to go and flamethrower his link.

I failed an infiltration roll on one of my Metros, so he went with a single MOV-shoot of the closest objective on the right, and the other was poised to take out Erik’s Netrods on Erik’s side of the field, as I had stuck the roll there. Erik dropped a second Agêma ML on my right out of reserve, behind some boxes, and then I flailed around a bit and finally ended up putting my Zouave FO reserve at the corner of the red-trimmed building. Stupid idea. Should’ve put him on the roof, prone! Erik nominates Ajax as his DataTracker and I nominate my Metro LGL as mine.

Erik starts by picking off easy targets with the Agêma ML on my right. My Zouave disappears in a ball of flame and shrapnel. I almost lose my Metro LGL to a missile as well, but I manage to make 2/3 ARM saves and Erik moves onto other things. He spends a few orders observing a few antennas, eventually netting the three closest to him, and the left middle antenna (from my perspective).

With that, Erik’s out of orders once he throws the two Thorakites into suppression.

I start by pulling in one of the Metros to the first order group to fill in the hole left by the Zouave then do a coordinated order to move up my Chasseurs. I move the ADHL one into position to lay a mine by the middle Thorakites FO, then start forward observing stuff with my Chasseur on the roof. I start by picking up a few antennas here and there, most importantly I flip the far right antenna, which used to be Erik’s. I use the infiltrated Metro to try and take out the Agêma on my right, but the poor bastard gets crit off the table. Damn missile launchers! 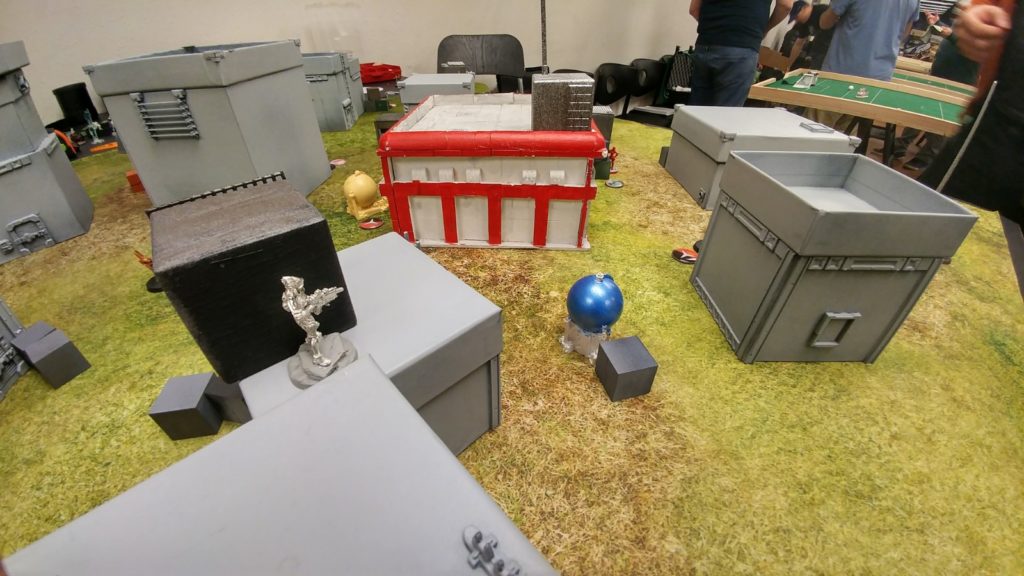 I pick up my downed LGL Metro by shooting him in the butt with the Paramedic’s Medikit, then I forward observe Erik’s HVT, reform the link, and start raining grenades. Thankfully, I’m already in 16″ of his HVT so with the FO bonus and link bonus I’m rolling on 19s. It takes me two orders to get through the HVT’s armor, but I finally secure 4 points for myself. I rolled a 17 and an 18, so I’m really glad I bothered with all the rigamarole of reforming the and FOing the HVT first. I’ve got one order left, so I decide to throw caution to the wind and do something crazy. My FO Chasseur, if she stands up and moves backwards, can in one movement see an FO Thorakites and both Netrods. I split burst between all three of them, and Erik breaks suppression to shoot back at me. He’s outside of max SMG range so he totally whiffs, but I roll a 1, hitting the Thorakites, another 1, hitting a Netrod, and a 8, critting the last Netrod. Erik fails both ARM rolls so with one order, I took out three! Talk about luck!

After blowing up the left middle antenna with missiles, Erik vocalizes that he wants to keep playing to the objective, so he sends in Ajax. Ajax and his retinue race across Erik’s deployment zone. He pokes a Myrmidon out to see my FO Chasseur in the middle of the board, but that particular Myrmidon isn’t the link leader, so I just delay with SSL1. Ajax starts smashing things, and I roast the offending Myrmidon with my Chasseur’s LFT. A few hammer blows later and the antenna still has a wound left. Erik stops messing around and tries to missile the antenna, but whiffs. 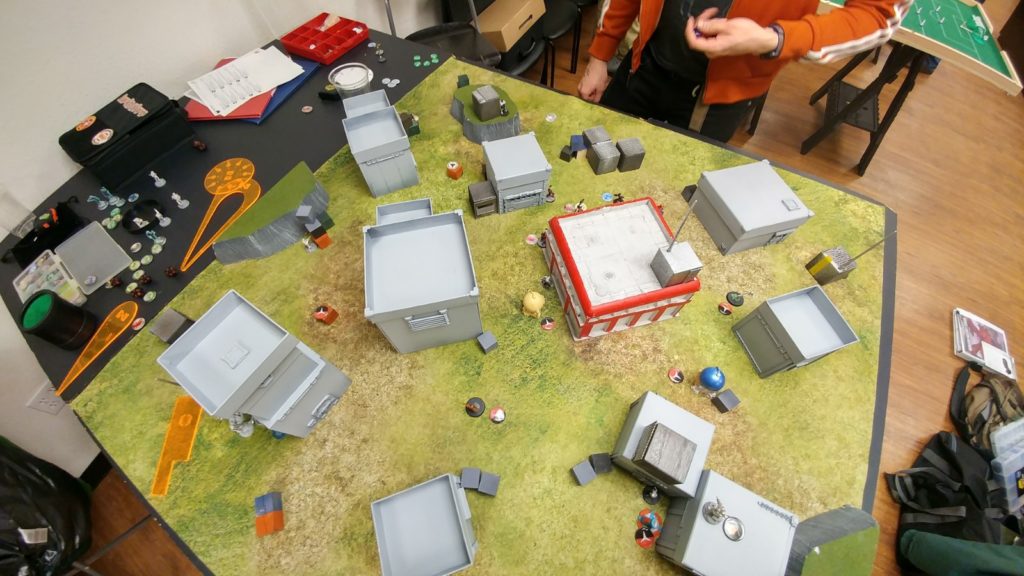 Erik’s a consummate gentleman gamer, complete with magnificent mustache, so if he was frustrated he didn’t show it and gamely passed the turn.

There’s a missile launcher watching my link, and I’d really like to get Bruant unstuck so he can go D-Charge something. I can’t move my ADHL Chasseur because there’s a Thorakites in suppression there with an Agêma nearby, so she’s stuck. I’ve only got a Metro with D.E.P. left, so I really, really need to get Bruant unstuck. I shuffle around my link so they won’t all die to a missile, and pop the Metro HMG up to take out the Agêma ML on my left. I immediately get crit off the table, shattering the link. Well, at least Bruant has a path foward out of LoF of the Agêma, but I had hoped to drag the link along. 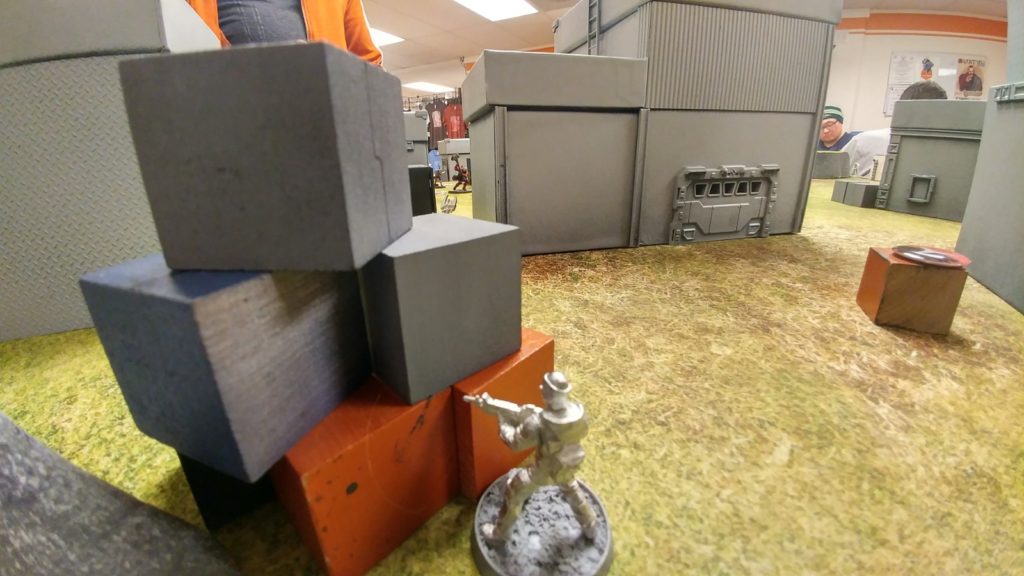 I run Bruant up the board and get a line of fire to Ajax. One order later, Ajax is unconscious. Wow. BS12 Molotoks are good. Well, I spend some more orders forward observing antennas, bringing my total to 6 out of the 9 antennas.

Erik is running low on options and orders and decides to get rid of as many anti-material-equipped troopers I have. The only convenient option is my Chasseur ADHL with D-Charges, so his remaining Myrmidon rolls a smoke grenade into position, letting the Agêma on the right gun her down, basically with impunity. I should’ve shot back instead of dodging but wasn’t thinking clearly about it. He misses the first time, but the second time she’s off the table. He spends his last order trying to finish off Ajax’s antenna with his other Agêma (on my left), but he whiffs.

I dash my Metro D.E.P. out of cover and blast the nearest right antenna into scrap. Wow! I got lucky on those ARM rolls. The Agêma on my right can see this but whiffs his shot.

Bruant guns down the Agêma ML on the left, freeing him to move, or so I thought. Once I break cover, Erik declares an ARO from the Thorakites FO on the other side of the board! Tricky, baiting a move out of me like that! Thankfully I beat his max range SMG shot with Bruant’s Molotok. For some reason those guys have ARM 3, so the FO survives. More importantly though, I’m out of LoF of anything now, so Bruant is free to start D-Charge punching the objective. 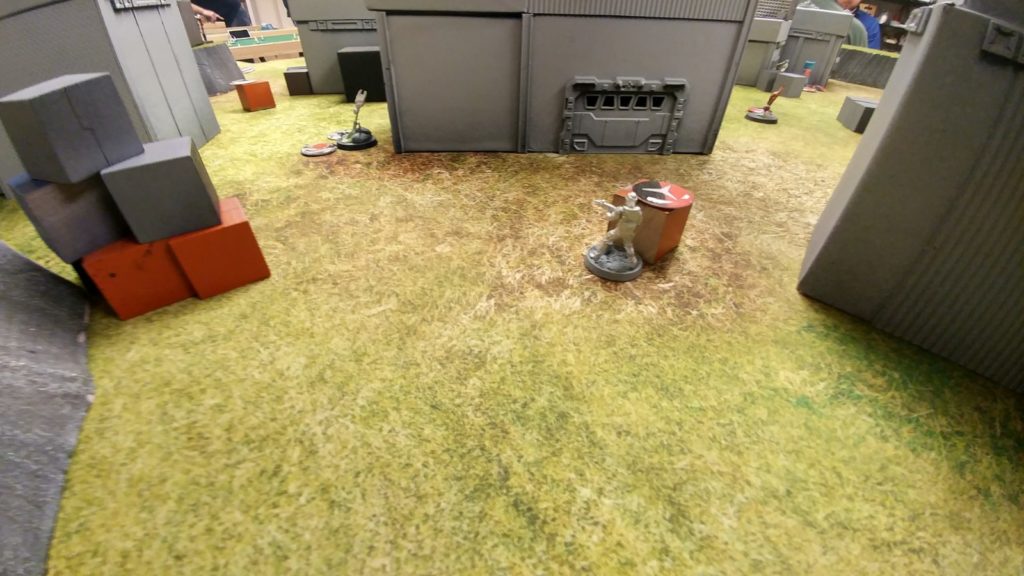 I get it on my first attempt. Successful CC attack, even with the -3, and 3 failed ARM rolls.

Final tally is Erik’s Designated Target dead by my DataTracker’s grenades, 6 antennas designated to Erik’s 3, and 2 to 1 destroyed antennas for a 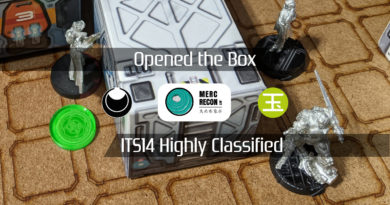 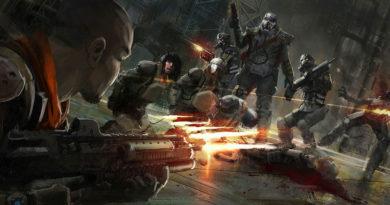 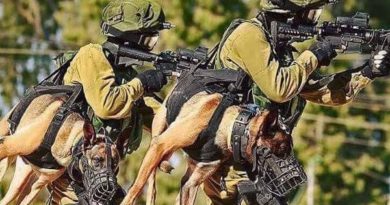