This year, Adam convinced me to go to Adepticon. Much procrastinating later, including the workspace reorganization you see above, I booked tickets and registered for the events.

Unfortunately, I missed the window to join the 300 point ITS tournament and only managed to get into the Biotechvore showdown tournament. Much list theory-ing with Nate later, I arrived at my two lists:

I’ve never actually played Biotechvore before. Nate generously offered his time to help me practice, but I wasn’t able to clear a hole in my schedule before the flight out to Adepticon.  Why not, you ask?  Because I was painting as fast as I could go!

I had some Jaguars that were mostly finished, as well as some Brigada that were done done, but I needed to finish the rest of my Brigada and build a new combi-rifle sculpt Brigada, as well as get the paint on my other models in my list. Thankfully, it being a Limited Insertion format helped a lot with model count.

I had finished a few of my Brigada over my last big hobby push–basically what’s in the SWC box and the Nomad half of Icestorm.

I took some glamour shots of them together, and they’re looking pretty good, dare I say it! I had actually put the hacker head on the ML Brigada and the ML head on the hacker, but oh well. Now the pistol-armed Brigada can proxy for anything I might want!

I knew I’d need to put together an actual combi-rifle sculpt Brigada at some point too, to get the capability to have both a hacker and a TinBot Brigada on the table a the same time, so I stole the comb-rifle arm from the Moderator hacker from the new SWC box and did a hand transplant and reposition on the Brigada hacker’s arm.

After filing down the hand guard on the gauntlet, it looks enough like a Brigada hand guard to pass muster at a distance. I also pinned the joint with tiny tiny wire, which was super fiddly and annoying to use. Time to get a pair of better tweezers, I suppose.

I like the pose a lot. The right shoulder is a little funny looking, because I wanted the gun pointed down (to protect the joint) and not straight out, but you can’t tell if you’re not looking for it. I’ve definitely come to lower the bar on my painting and assembly. I’m still enjoying the process, but I don’t want to agonize over every little detail, especially if you can’t see it unless you’re staring at it under magnification in harsh lighting. Some quick airbrushing and painting later and we’ve got a 6th member of the fireteam!

She definitely looks like she belongs. I think the Brigada HMG came out looking the best out of all of th em. I think it’s because the gun he’s carrying breaks up the lines in just the right way.

This is the first big model (above S2) that I’ve done entirely with the airbrush so far, which was basically a requirement due to the huge amount of exposed fur on McMurrough here. I blocked in the colors and started building up the layers on his fur, ending in a nice orange to retain the studio paint job foxy look.

I really wasn’t happy with the super green green of the backpack here, nor did I like the red kilt color…

So I changed it, thanks to some suggestions from PJ. I did a gentle spray of Vallejo model air olive drab on his backpack, which darkened it right up in a way I like a lot. 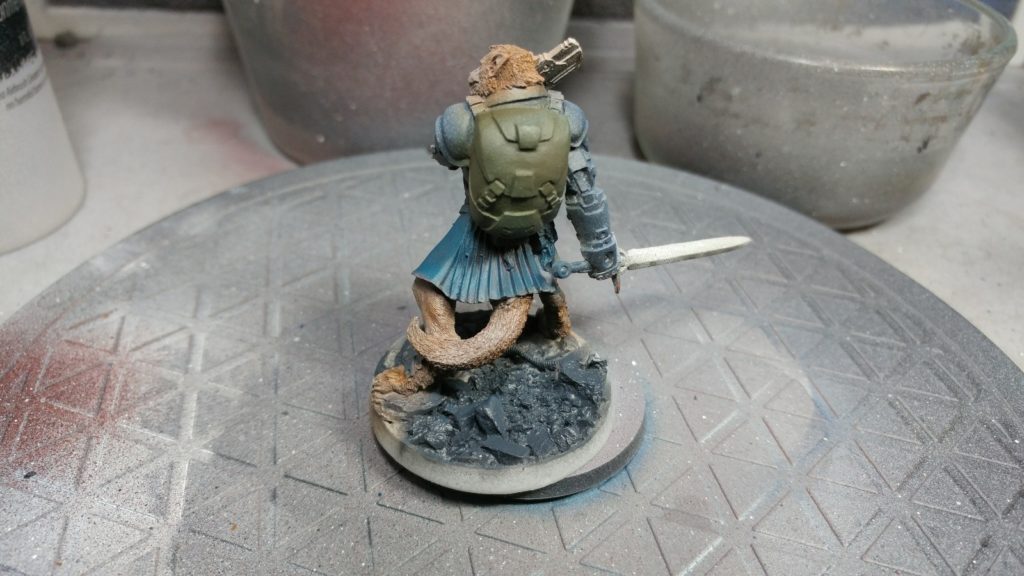 Nate and Erik both liked the red kilt better… but I really like the blue-green kilt color.

After blocking in the LoF markings, I’m leaving him for now. There’s simply too much detail to get done in time for Adepticon and I have bare-metal Bandits and Morans to paint! I’m eventually going to turn his kilt into Anderson tartan.

While I really liked that red color (it’s Vallejo hull red), it didn’t need to be all over the model.   I think the Anderson tartan (PJ’s suggestion) will be a quite nice way of breaking up the kilt some and retaining some of that red that Erik and Nate liked.

These guys had already been basecoated from awhile ago, and just needed to get through the last mile of work. I really like the skull pommel on his knives, even if they are comically large. I also dig the slight green edge on the blades, makes them look FUTURE.

I did one pass at doing his eyes, but then it turned into derpface time pretty bad. 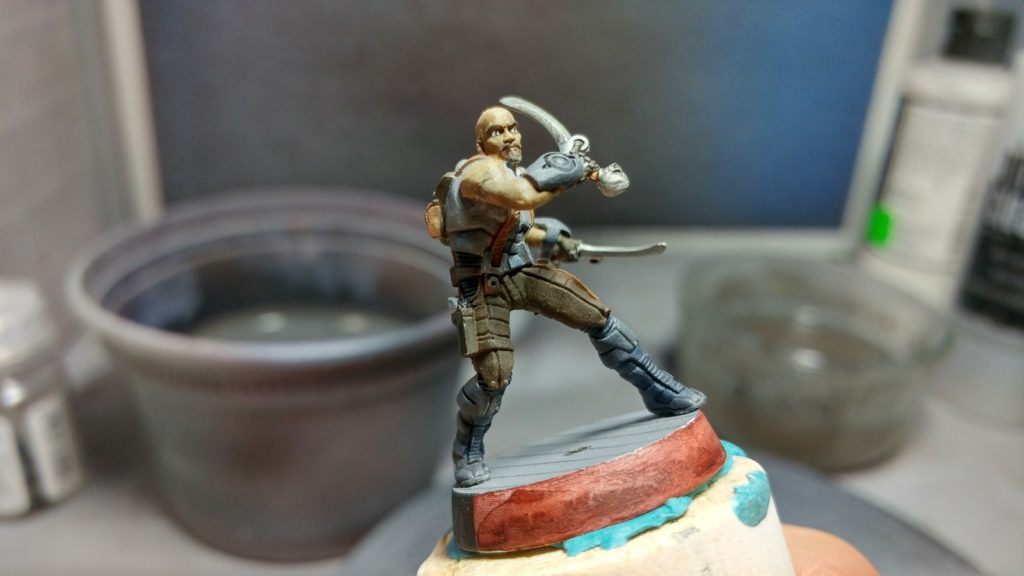 I attempted to fix it, and… was reasonably happy with the results.. so I’m sticking with this.

I’ll be using him as my universal Jaguar proxy for the purposes of both lists, even though I’ll eventually have to get around to painting my Jaguar Panzerfausts. My Chain Rifle Jaguar was really really fun to paint though.

I tried to make it look like he shaved his head, using a light light grey wash which I then washed again with some flesh tone.

It looks okay. With all the piercings on his face it isn’t too distracting.

Here’s a better photo with less lighting so the camera can pick it up better. I think it looks good here, if a little blobby in the back. Can’t really tell except under close inspection though.

The first time I did a basecoat on Massacre here, I overdid it with the white in the zenithal highlight, and I hated his pant color. 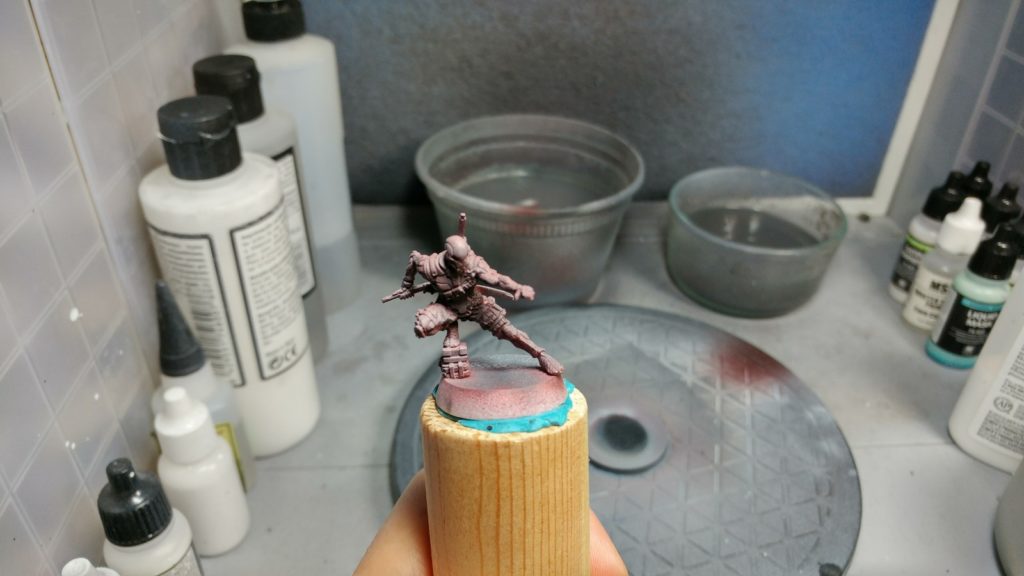 After blocking out all the pieces, breaking off his sword arm and re-gluing it three times, trying to pin it, breaking the bit in his wrist, and then just gobbing superglue on it and gluing his sword to the scabbard, we have the following!

I think this is better, even if the Reaper Woodstain Brown is really close to the Vallejo US Olive Drab… So after finishing up a few more things I varnished him with a promise to (maybe) come back later.

I hated my original paint job on this guuy, so I just stripped and re-did it. It’s not amazing, but there’s only so much you can do about the tacticool pajamas.

I do like the Army Painter Leather Brown on his… midriff shirt? I dunno. It looks good though, breaks up his silhouette nicely.  Apparently I did an okay job on the dark skin tone, according to PJ. I’ll take it! I like the grey dreadlock look on him too, ties in with the rest of the grey on the model and in my force, and makes sure that there’s a noticeable transition at the hairline for this guy instead of brown->brown.

This view is hilarious though:

My Moran is so comfortable! It’s like he’s wearing nothing at all!

I finally redid my Bandit using the airbrush too. After stripping the model down to bare metal, it only took me ~3.5 hours to get to a place where I was comfortable varnishing her.

Lots of things to clean up… but it looks good from all around, I like the way the colors are working together…

So I’m calling it good!

That’s it! Everyone’s assembled and ready to go!

Hope they all survive Biotechvore! 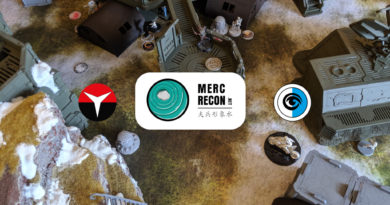 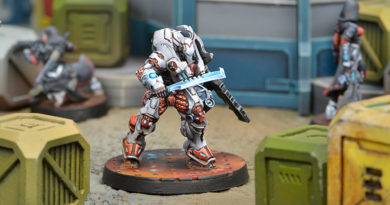 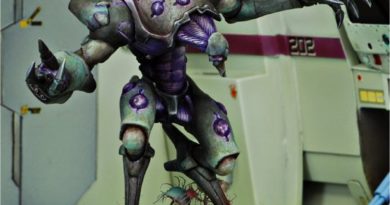