Been awhile since I put spaceships on the table, but Adam and I managed to sneak a game in at on game night at Portland Game Store. I’ve been so focused on Infinity models in my hobby queue that I totally forgot to pack a new DFC list, so I’m reusing the one from Silent Running. Adam brought some new monstrosity for me to fight against. Hey, trying the same list again at least lets me practice more, right?

The first turn for both of us was pretty quick, like most first turns of Dropfleet. Adam’s Seattle and San Francisco come trundling onto the board, supported by a Jakarta. I responded with my Europa/Pandora battlegroup, then Adam brought on his Moscow and I brought on my Orpheus and some Echos.

Basically everyone was Silent Running except for Adam’s two Limas, who managed to put a minor spike on one of my Pandoras.

I figure if I can take out his San Francisco and New Orleans (which I know are coming) I can win the drop game. Adam’s first card is to activate his Moscow. It doesn’t have any targets, so it just moves up under silent running. I bring on my Ganymede and another pair of Echos and successfully Active Scan the San Francisco, putting a major spike on it.

I throw the Pandoras and Europas at the San Francisco, racking up a few hull points of damage.

My Europas are way more reliable–Pandoras are so inconsistent! I use one of the Europa’s other broadsides to throw some dice at a Lima with the Europas but whiff badly.

Adam responds by bringing on a battle group of SEVEN Taipeis, double-moving them into strike range of my Europas and a pair of Echos. I nearly drop my tape measure.

I activate my Europa/Pandora group first, hoping Adam didn’t choose his SR7 group of Taipei first… I am disappointed!

Their volley of main gun shots finish off my Echos and one of my Europas, which just vanishes off the table in a otherwise harmless fireball… However, the Europa on the left of the frigate group takes an obscene number of missiles to the face, suffers a drive detonation, and deals two damage to everything within 6″, which is my two remaining Europas and four of Adam’s Taipeis…

The resulting chain explosion cataclysm erases all but two Taipei from the board! Success! Hooray for PHR Frigate resistance to chain reactions!

My counterstroke, while greatly diminished, is enough to core the San Francisco with my burnthrough lasers and broadside fire, taking it off the table.

I lose one of the Pandoras to the Seattle’s bombers, but this is totally worth it. The Europas manage to take out one of the Taipeis, leaving only one on the board.

My Orpheus tries to finish off the last Taipei… but when you only roll one success on 12 dice… that’s not gonna happen. I start complaining but Adam just points at my Ganymede and gives me an exaggerated frown, so I shut the hell up.

My Medeas move up, as do Adam’s strike carriers and corvettes, and I lose another Pandora, this time to the Moscow’s gun batteries.

Adam has chosen to strong-side his right, giving me my right basically uncontested.

I activate my Ganymede/Echo group. My Echos take out one of the Santiagos to help defend my leftmost Medeas, and my Ganymede finishes off the last Taipei.

I activate my Pandoras and Europas, trying to put more damage on the Moscow, but fail to do much.

His Moscow turns my Ganymede (which took some damage from bombers last turn) into a shattered hulk, barely limping along.

One of my Pandoras takes some fire too, but that ridiculous 3+ ARM saves me. 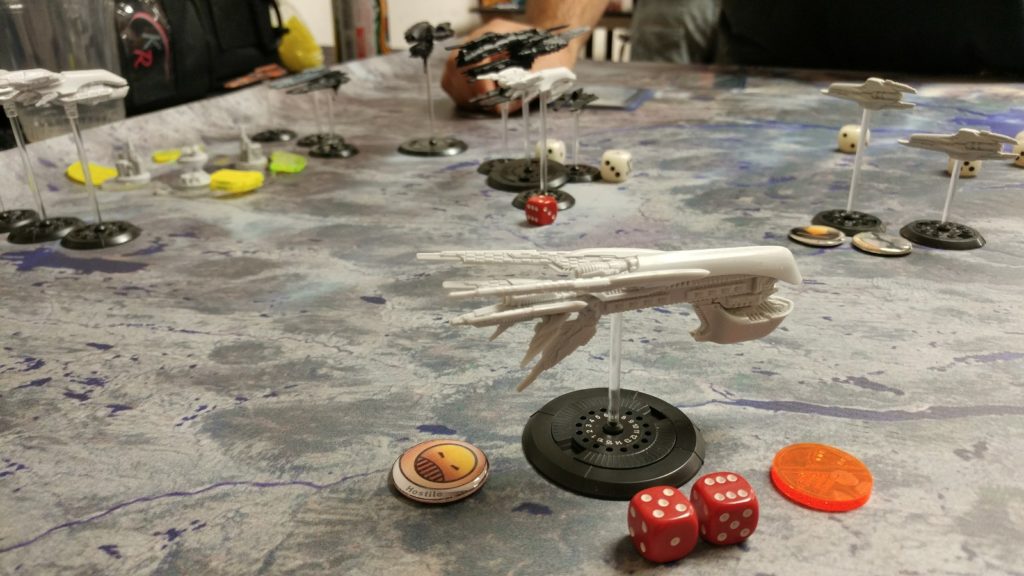 Adam’s corvettes sink their teeth into my Medea, but I shrug off the blows and bombard one of his tanks off the table.

The score is now 6-4 me or something? Not sure. The space game feels pretty disconnected from the ground game at times.

I need to finish de-fanging Adam’s list so I bring in my Echos and remove the Santiagos altogether. I’m now free to win the attrition war on the left. 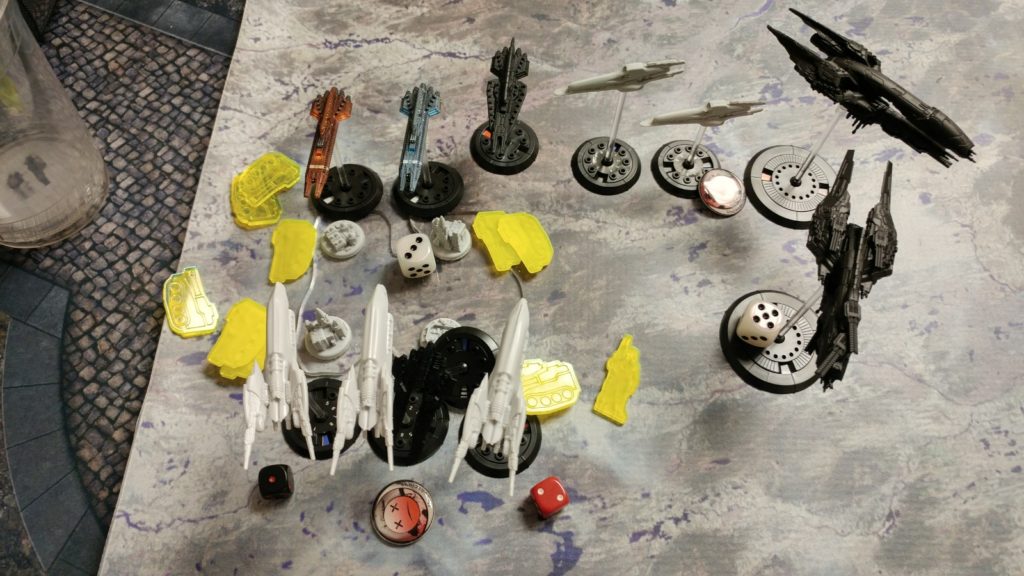 I manage to get my Orpehus into drop range of the central cluster, although I do get walloped by the Moscow and Seattle.

The game store is closing and Adam concedes, giving me the victory. 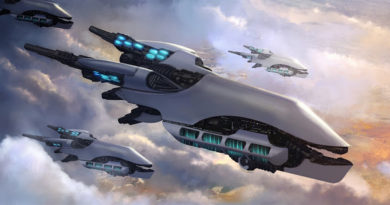