Time to practice for the Emerald City Incursion Mk II! James has been featured a few times on this blog, and he continues to improve game to game, order to order. He’s also a big fan of Su Jians, so I always have to chew through a ton of BattleCat wounds. UGH.

I won the rolloff, and elected to go first. I had thrown together a list of stuff for limited insertion, not really thinking about it–certainly not from the perspective of Supplies. I wasn’t super sure what I would do, so I just sorta got on with things. I covered my deployment zone in Koalas, using a Lunokhod on the left and my Taskmaster on the right. My Kriza sat in the midle, more or less ready to go either direction. I put my Transductor on the roof of a building o nth eleft, and then stuck Mary behind some boxes on the left. Pi Well and Zoe came down on the left and right, respectively, with Pi Well poking out a little in case I wanted to use him to Triangulated Fire something, and then I put my Bandit KHD near the leftmost box. 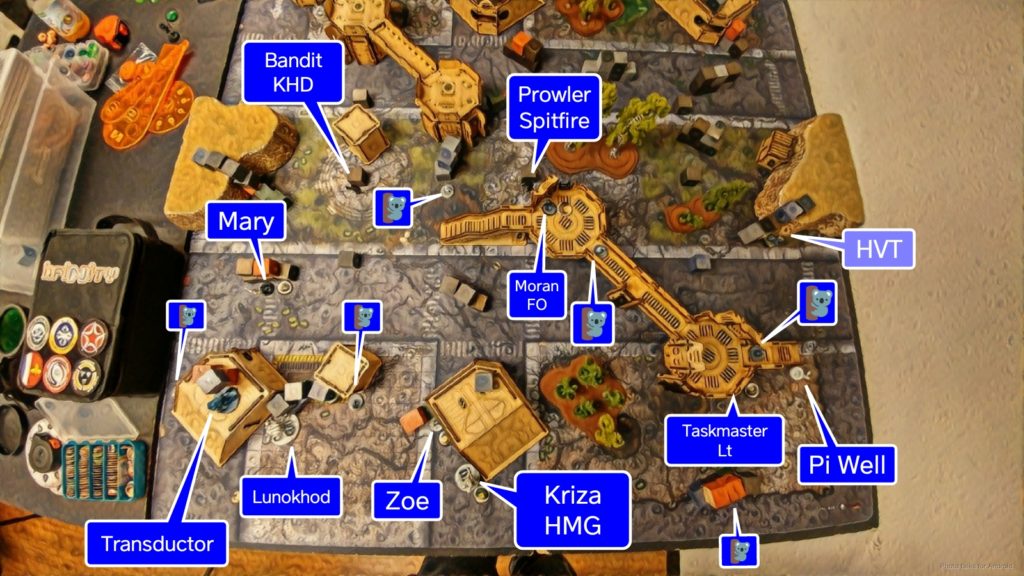 James piled a Kuang Shi order battery in the middle of his deployment zone, and then put down a Su Jian duo on the right, with the Spitfire left out to ARO. He put his two visible specialists on the left and right–the Wu Ming and Pheasant, respetively, and then over-infiltrated the Ninja KHD onto my side of the table. 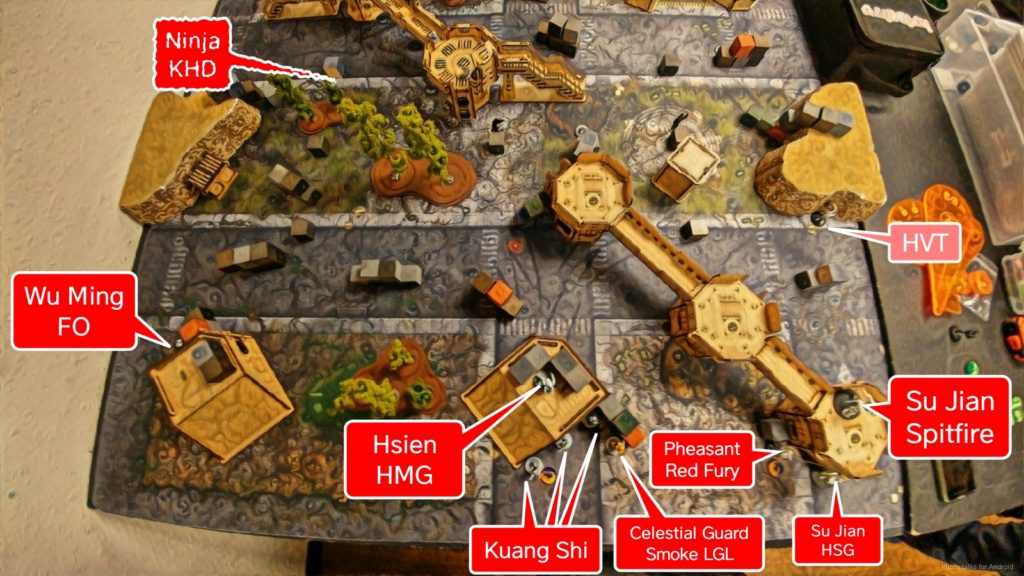 I didn’t have a great plan for my Prowler, so I put him in the middle of the table, and then James responded by putting down his Hsien in the center of his deployment zone, left out to ARO.

Well, the Kriza’s entire point of existence is to punish things left out to ARO, so I did just that. It took a few orders, one of which had a simultaneous crit, but I finally put the Spitfire Su Jian down. 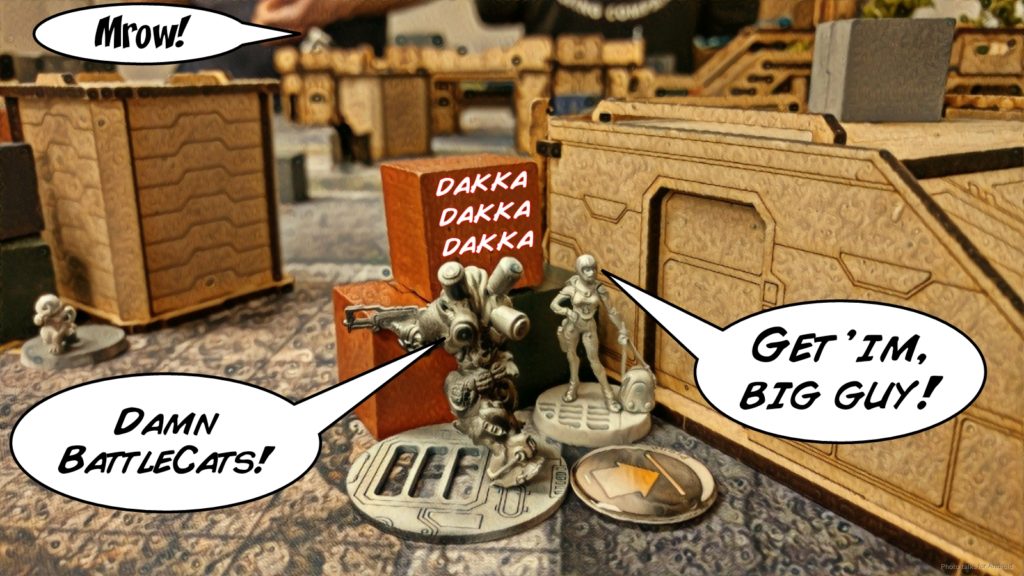 I was inexplicably in a hurry, so I attempted an early ADHL shot with my Bandit, not really paying attention to the range. James rolled better and was on 11s versus my 6s, so I lost my Bandit. Sigh. Asked too much of her. 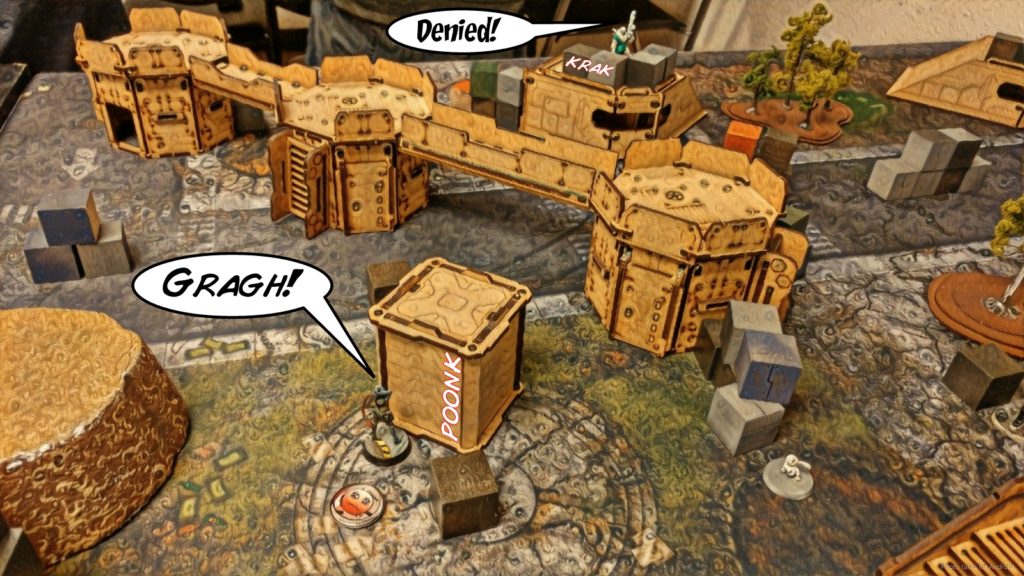 Then, I attempted to get a Prowler into 16″ of the Hsien as part of coordinated order to advance the Lunokhod, the Kriza, and Zoe. James attempted a discover on the Prowler, so I took the free two shots and put a wound on the Hsien. Now that I was in 16″, I figured I could beat the Hsien in a face to face with four dice, but of course I roll four good hits and then James rolls a crit. 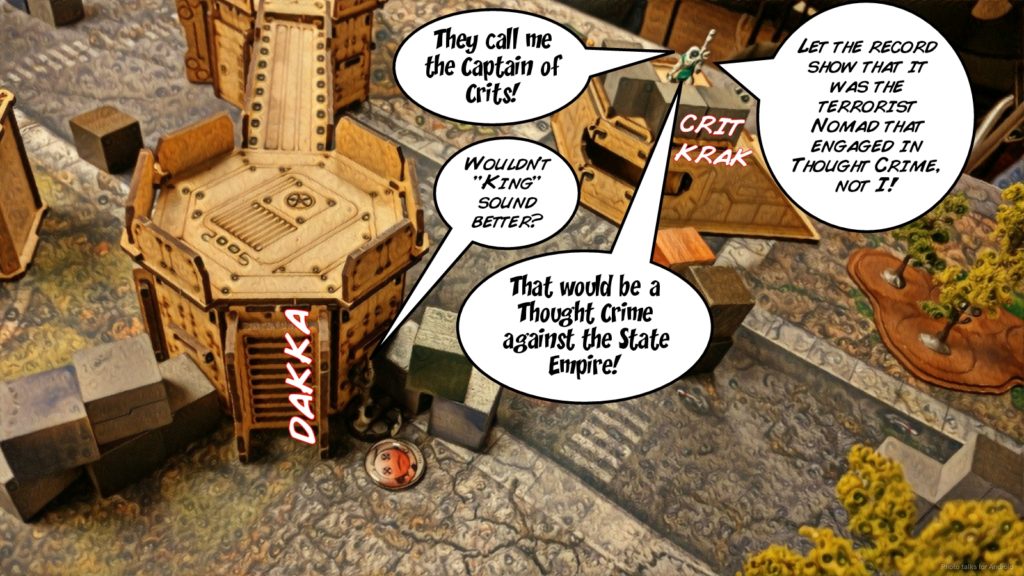 Mary Problems is in position now, so I stick a repeater next to the remaining Su Jian. Now I’m basically out of orders, so I settle things into place and then throw a few things into suppression. 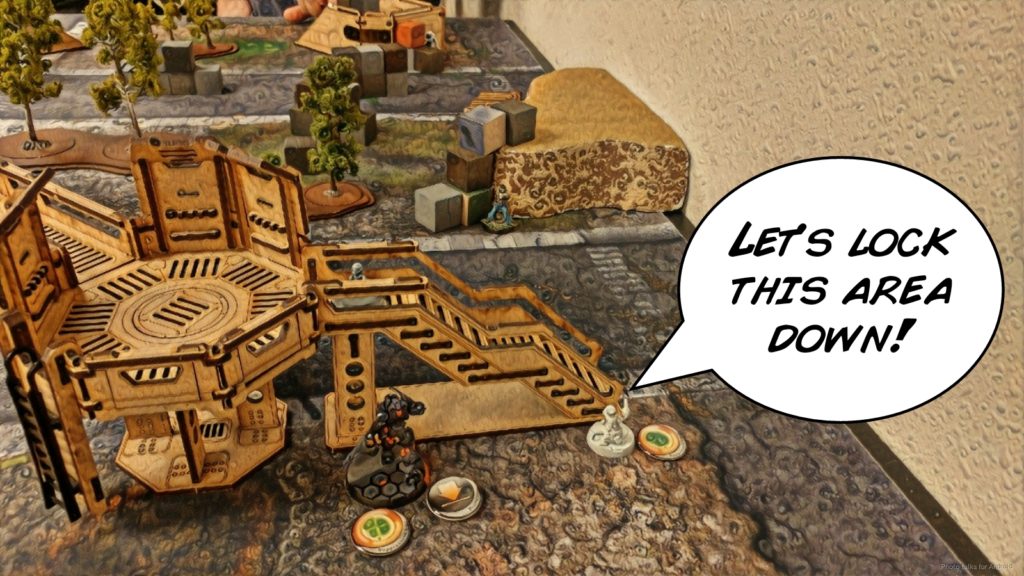 I’m hoping that Pi Well can protect my right flank from the Wu Ming and my Kriza can protect my left flank. Mary Problems and Zoe are left out of the suppression party since they will need to hack some stuff, probably? 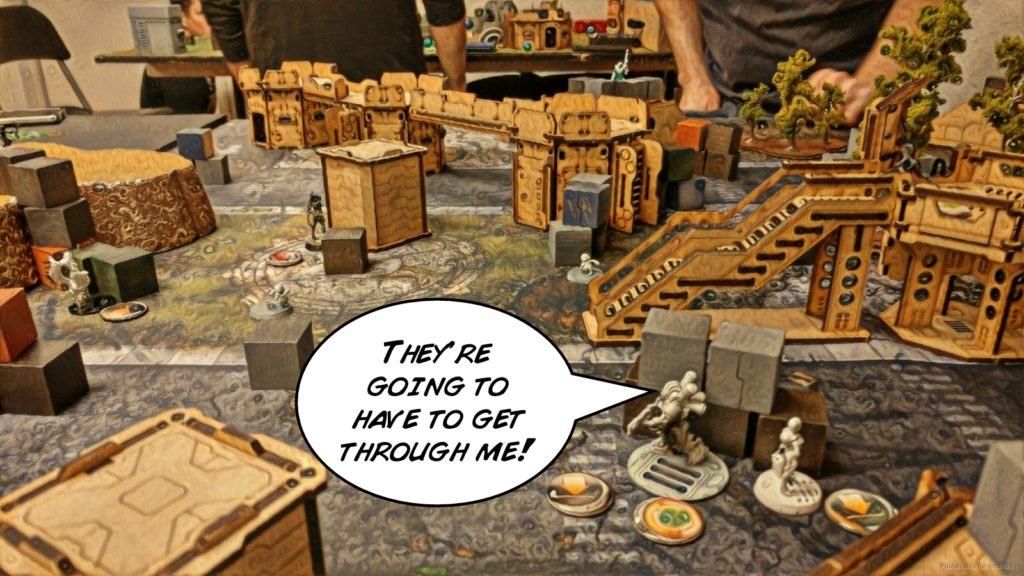 That’s that, so I pass the turn without much progress.

James backs the Hsien up to take a shot at Pi Well. I break suppression and dodge to safety, surprisingly beating out all four dice. 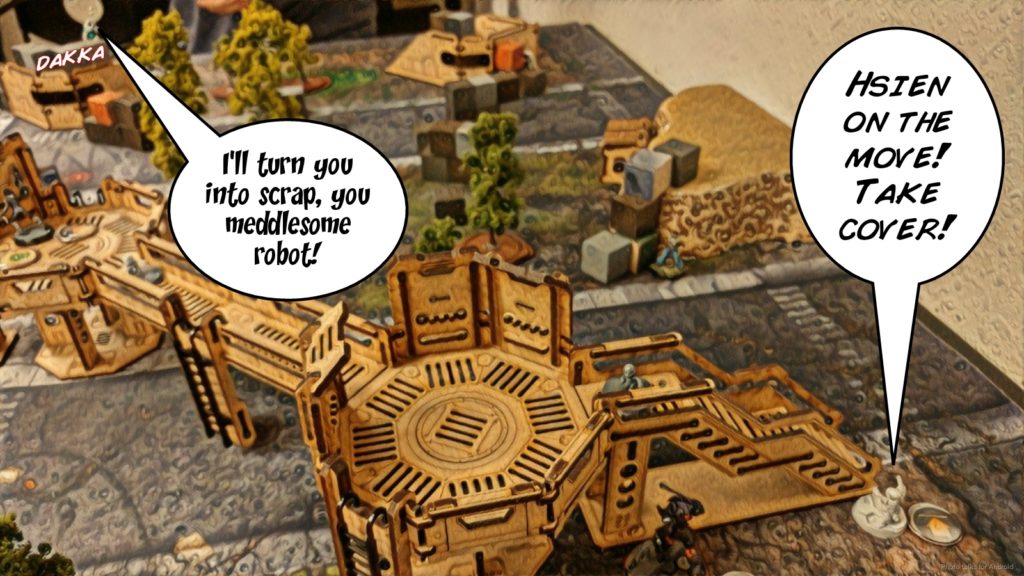 After hopping off the roof, the Hsien drops the Transductor too and then advances, skirting the range of my Koalas and Morans very carefully. 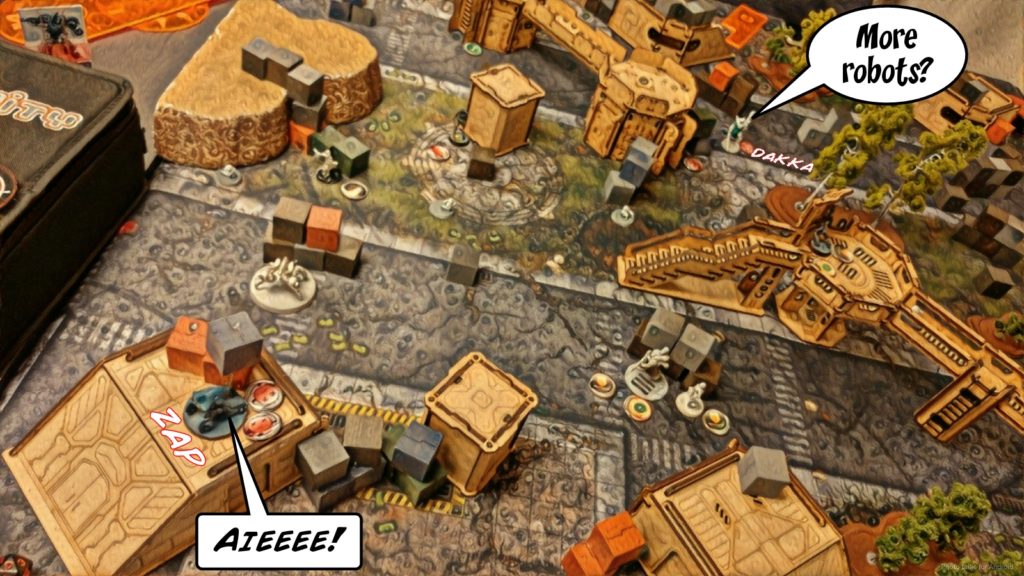 The Hsien attempts to take out my Lunokhod, keeping out of Koala and Moran range, but I pass my ARM saves and fail guts out of LoF. 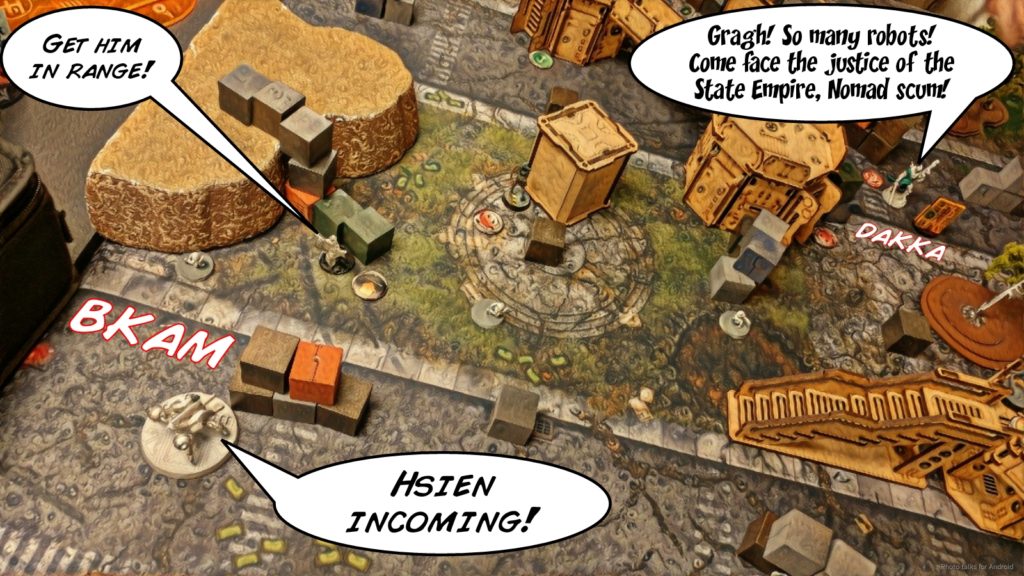 The Hsien unsticks the Su Jian by taking out the repeater, and then James spends a coordinated order. 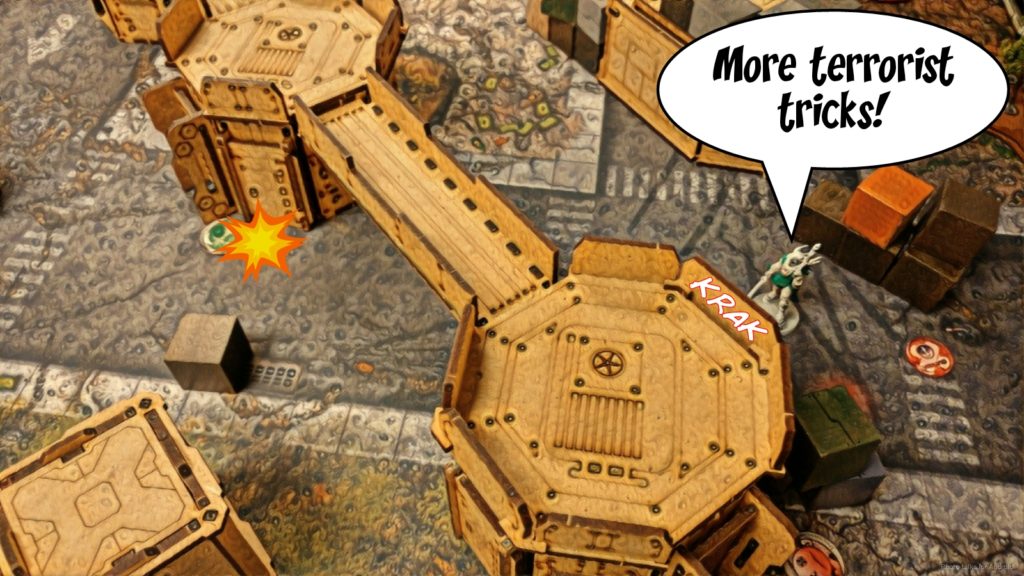 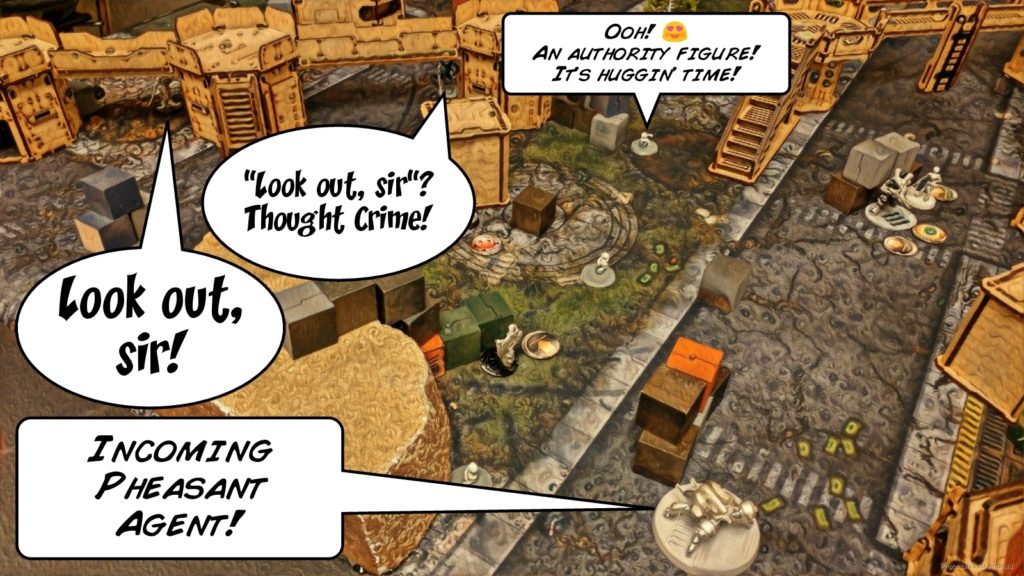 Unfortunately, I whiff the shotgun shot and the Hsien dodges successfully. 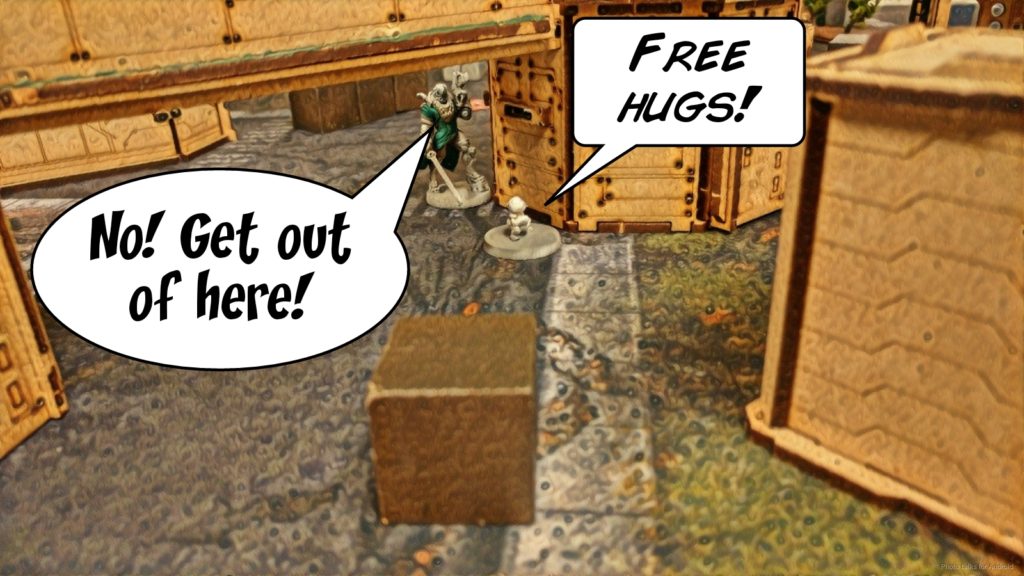 After putting the Pheasant and the Hsien into suppression, James passes the turn.

The Hsien has unstuck Zoe, so I make a play for the center objective, attempting to get into range of the Hsien to hack it, but the Wu Ming’s LoF keeps me out of range. As I make a play for the box, James reveals his Ninja, forcing me to take shots at the Ninja instead. I lose the face to face, but pass two ARM rolls agains the Tac Bow, and then Zoe dies on the next order of trying again.  Pi Well was out of position and therefore couldn’t get a Trangulated Fire off. I coordinate an order between the Kriza, Mary, Pi Well, and the Moran instead to take out the Ninja. Between them all I manage to knock her out, and then I’m forced to pass the turn back.

The Hsien is free to move now, as is the Pheasant. They ping pong my Lunokhod between them until the Hsien takes it out.

The Wu Ming attempts to take out my Moran, but the trees and their saturation/low-vis zone make it a non-starter. 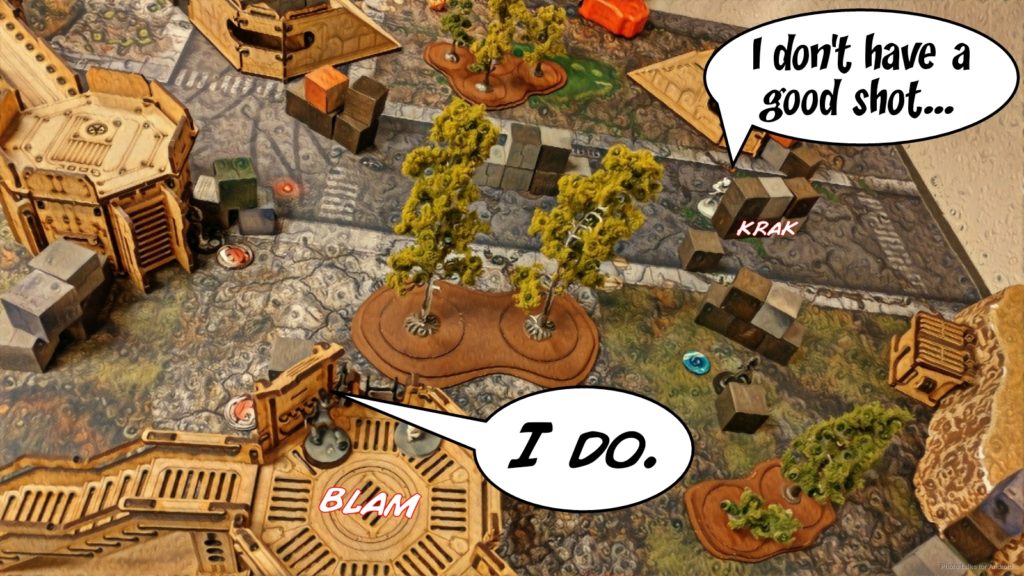 James wisely stops pouring orders into it, and instead tries to take out my Kriza with a combination of the Hsien and the Su Jian. 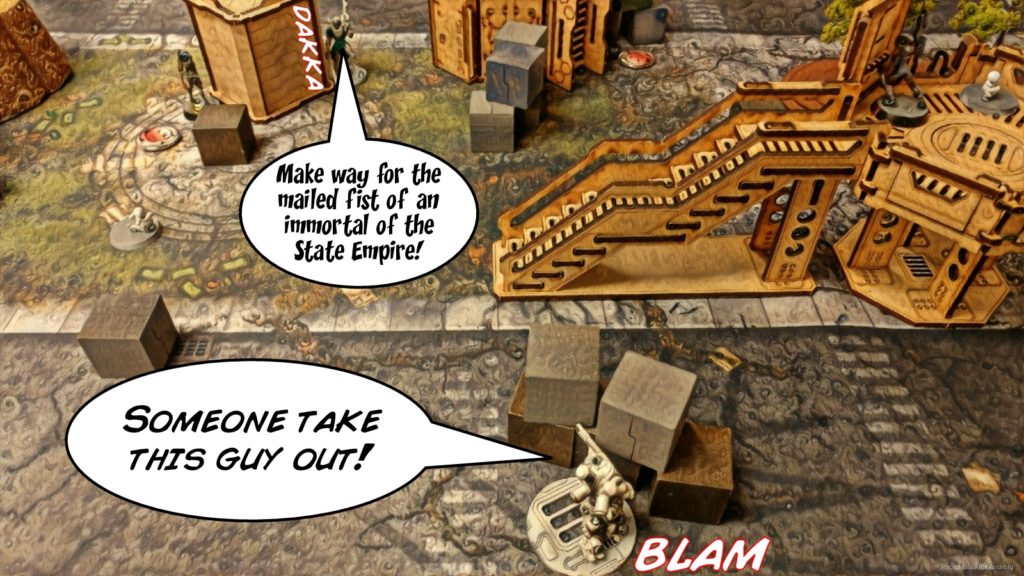 On his last order, he finally knocks out the Kriza. That full auto is awesome!

I need to unstick Pi Well to make a run for an objective before it’s too late, so I sacrifice Mary to land a Zapper on the Hsien. I lose her to all the return fire, but manage to isolate and immobilize the Hsien. 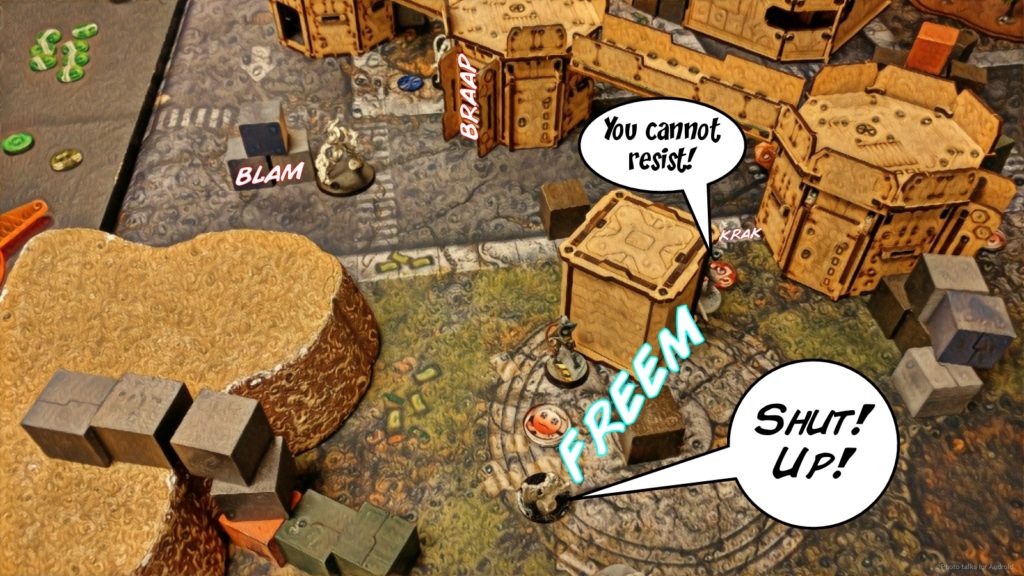 Pi Well scoots into position, nabs the box in one WIP roll, and scurries to safety. 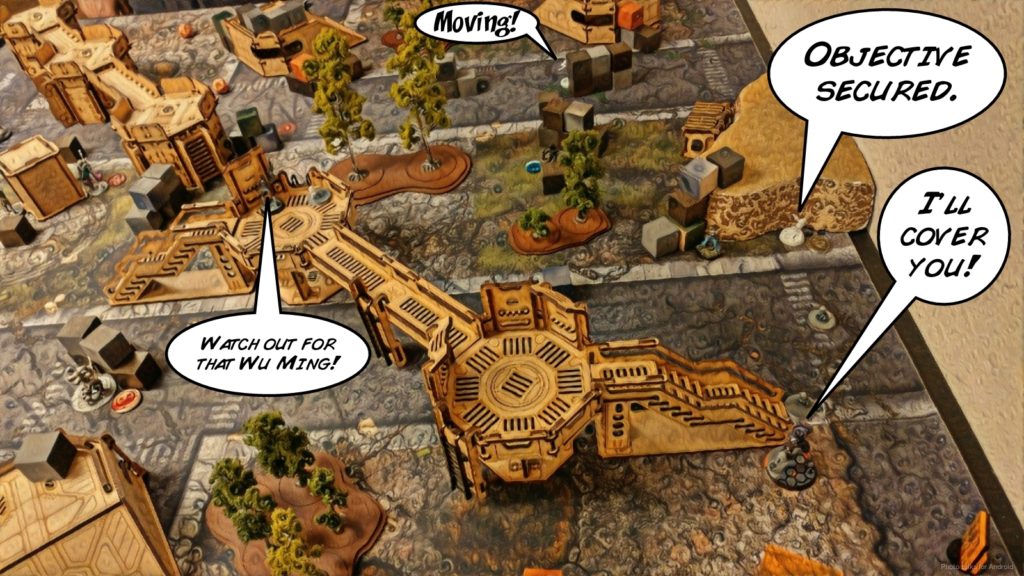 I spend my Lieutenant order to move the Taskmaster up to protect Pi Well from the Wu Ming, and put the Taskmaster’s Koalas into a screening position for Pi Well.

The Su Jian clears my Moran to unstick the Wu Ming. 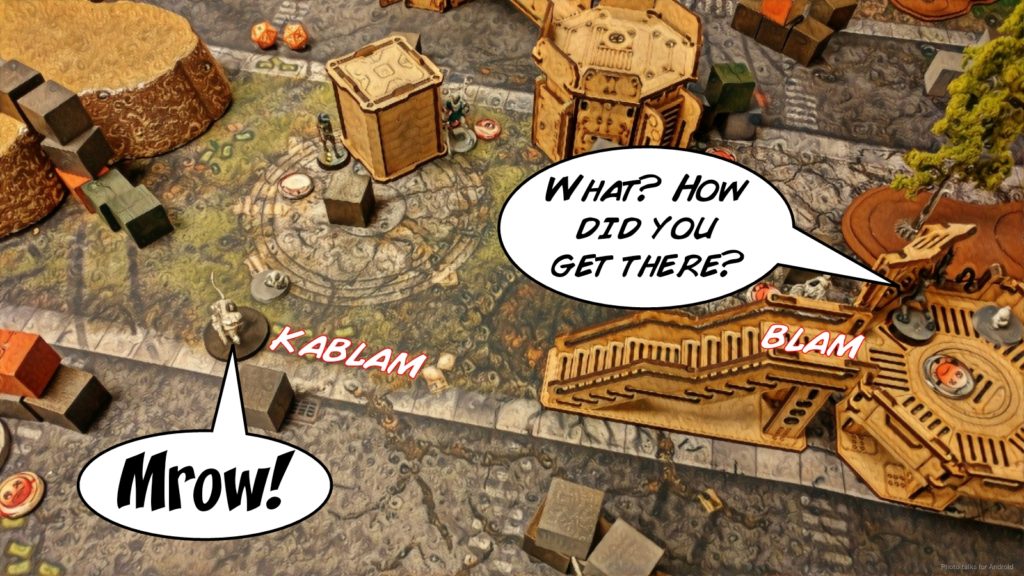 The Wu Ming makes a mad dash towards the center objective, but my Taskmaster puts him down. 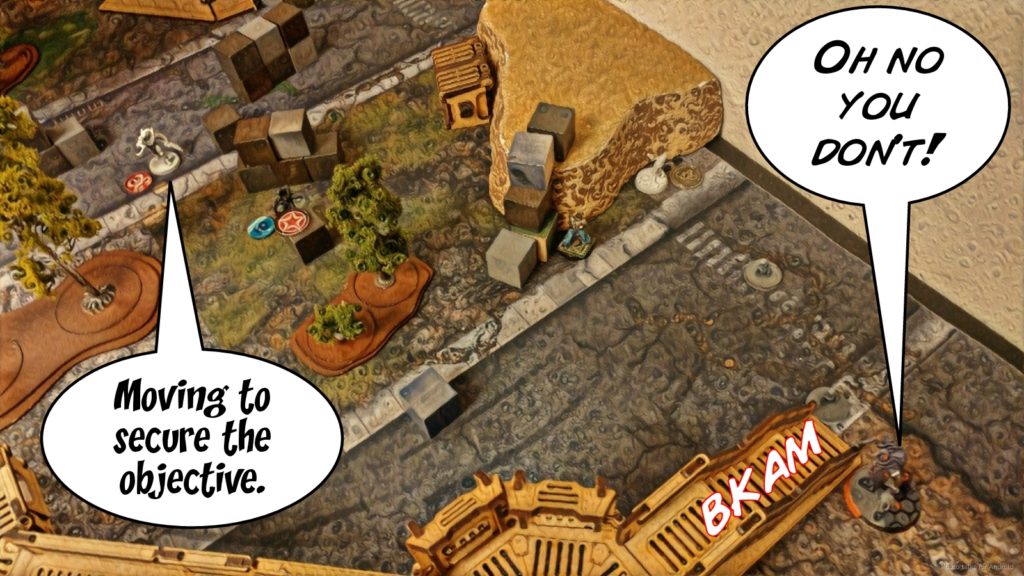 The Su Jian tries to take out Pi Well from across the board to force me to drop the box, but Pi Well’s ODD and quick draw on his flash pulse save me, stunning the BattleCat. 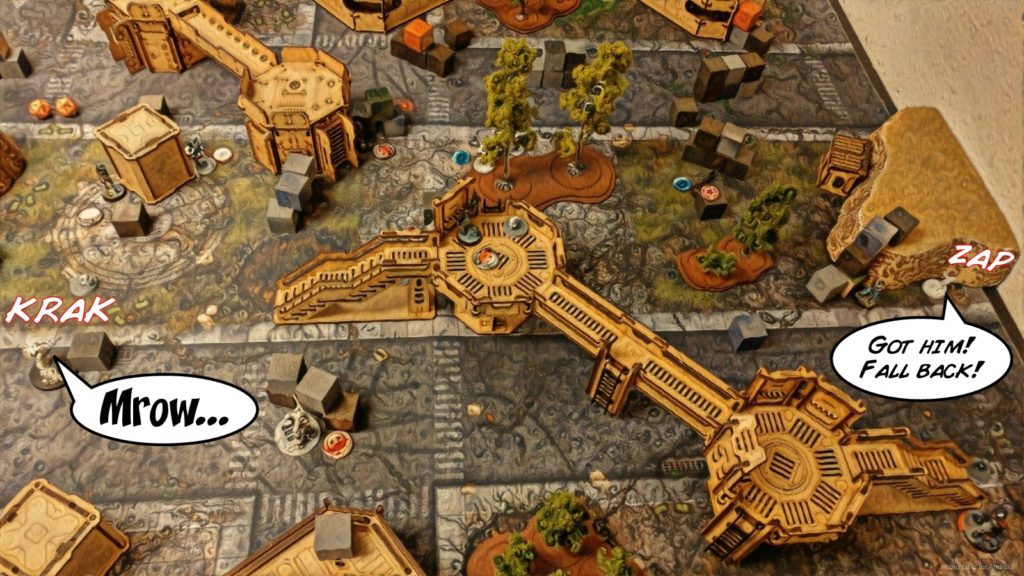 Neither of us have any of our classifieds, and I have a box to James’s none, making it a 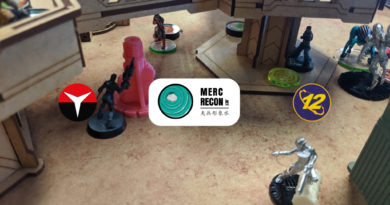 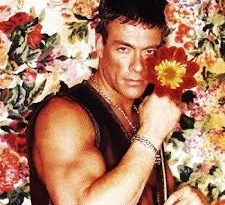