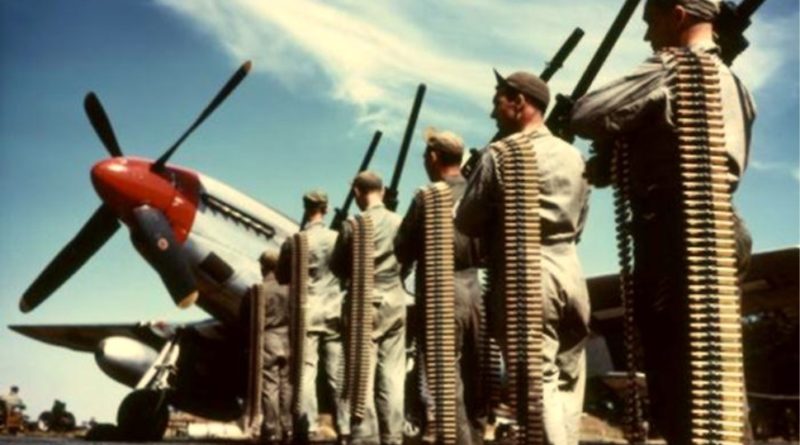 Obadiah (Nehimiah) made the drive up to Portland from his home in California to visit and swung by our Thursday game night to say hello. He brought his “light” camo list to throw down against me in a game of Acquisition. Obi is an excellent player, so I knew I had to bring my A-game. I had packed Nomads, Ariadna, (and a small FRRM force for Recon+), but I knew I had to play Obi with Nomads to give myself the best chance!

I think we both really gave it the whole 9 yards this game, really asking everything from our units to give us the win. As a quick aside, I had always thought that “The Whole 9 Yards” came from a World War II aerial combat origin, where the machine gun belts in some planes were roughly 9 yards long. Apparently the phrase was in use pre-World War I, but was adopted for use in the World War II context. Anyway, that explains the above photo. It’s often difficult to come up with titles and pictures for these battle reports, so I’m sticking with a cool picture of a plane. Hope you enjoy the game. It was a real nail-biter. Literally came down to a single die roll on the last order of the game.

I won the roll-off and elected to go first to at least set up some sort of defense against Obi’s “light camo” list, coming in at something like 13 camo tokens. Discovering them all is a mistake, so I wanted to set up some mines, layered reactive discovers, and suppressive fire. I put my Zondnautica in a safe corner, then threw down some Morans and their Koalas covering the middle and left of the field. I stuck my Intruder outside of my deployment zone to bluff a Heckler Jammer prone on a roof near an objective, and then stuck Zoe on that side as a backup specialist.

Mary sat in the middle, ready to make it up towards the central objective as my DataTracker, synced with the Xenotech. All the eggs in one basket, eh? Aida, the Kriza, and my Interventor loosely covered the right. Not a lot in the way of board control on that side, but I was hoping to use Aida to mine up the midfield to rectify that. I held Pi Well in reserve. Obi shooed me away from the table he could take pictures the actual units under his camo markers, since he had so many of them. I came back to find a pile of camo tokens everywhere, composed mostly of Streloks. The key players are the Scout BSG in the middle, and the pair of Veteran Kazaks near the center of his deployment zone. 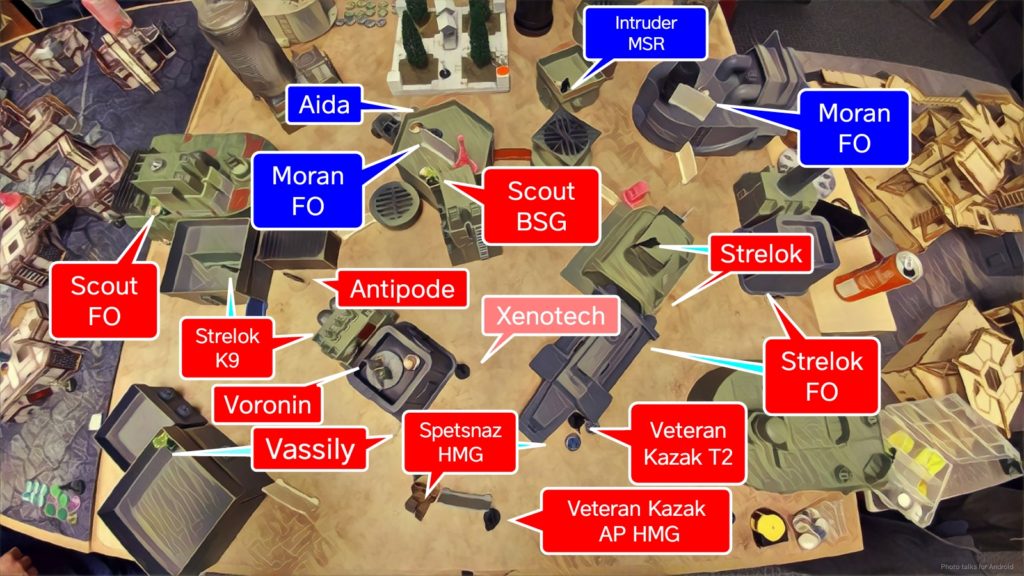 I looked at the best bang for my buck on firing off a Sensor with Pi Well and settled on my left, so that’s where Pi Well went. Obi responded by putting down his Scout FO all the way on his left, prone on a building.

I zoomed my Zondnautica to the corner of the building, keeping out of LoF of the Vet Kazak HMG that Obi had left out to ARO and firing some smoke for my Intruder. My Intruder popped out and then Obi reminded me that all of my usual tricks didn’t work due to SSL2. Drat. Well, at least he had to contend with camo and cover. I manage to sneak a hit through, but Obi passed both DA saves. 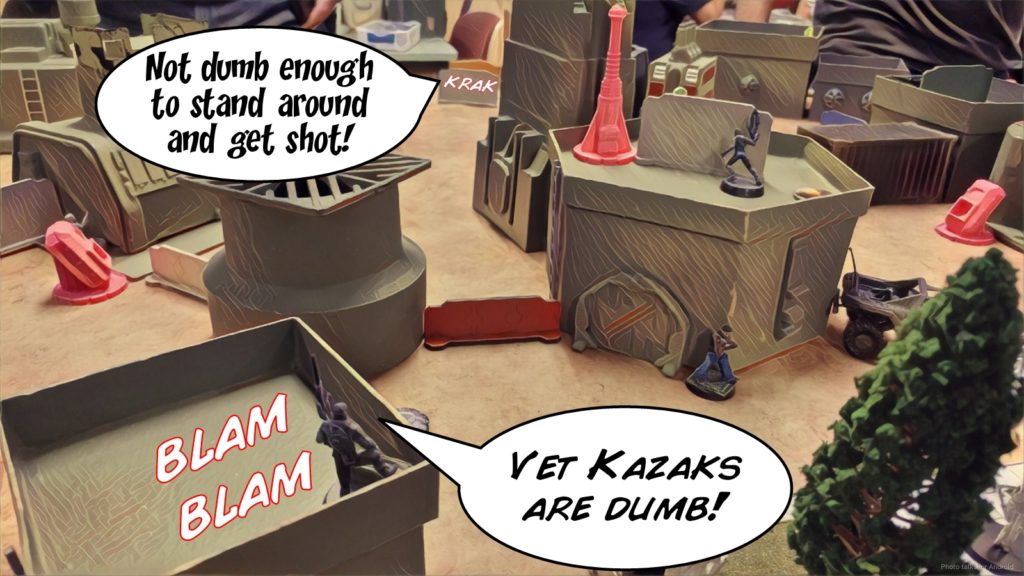 Obi wisely failed guts and hid his Vet Kazak from view, which let Pi Well advance, activate the left antenna, and get a sensor off, revealing a Strelok on the left and getting rid of two ambush camo tokens. I then did a few coordinated orders to get Pi well to the other side of the table and drop a mine with Aida, revealing the Scout BSG atop the center building on the way there.

I managed to get my Xenotech into position and drop a Multiscanner on my first attempt, and then left my Xenotech blocking the ladder to the central objective. The rest of my turn was spent dropping the Intruder prone, moving the left Moran out to cover my left flank, settling Pi Well into cover, and throwing the aforementioned Moran, Aida, Pi Well, and my Kriza into suppression. This lets Obi take out one of the Moran’s Koalas, but oh well.

I even cybermasked Zero Cool to protect him with his Lt order before passing the turn. I unfortunately ran out of orders to adequately hide Mary, but I managed to tuck her out of LoF of the scary big guns.

Obi starts tings by dropping his K9 team prone and scooting them past Aida’s mine. 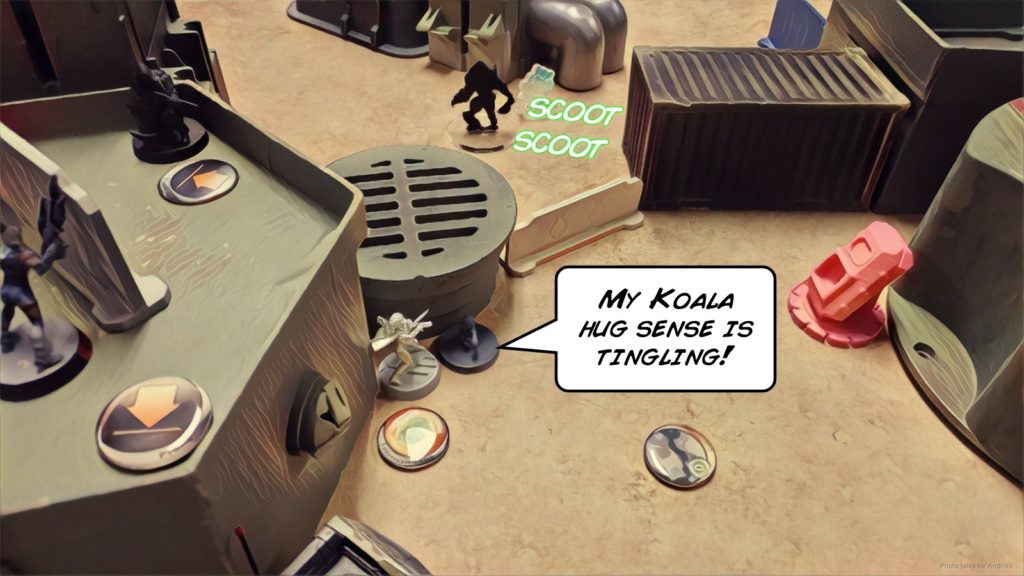 He decides that my Moran in suppression needs to go, and gets his Vet Kazak HMG into position. I managed to drop him down to 4 on 7’s versus 3 on 6’s, but Obi crits and that shuts down my left flank pretty hard. 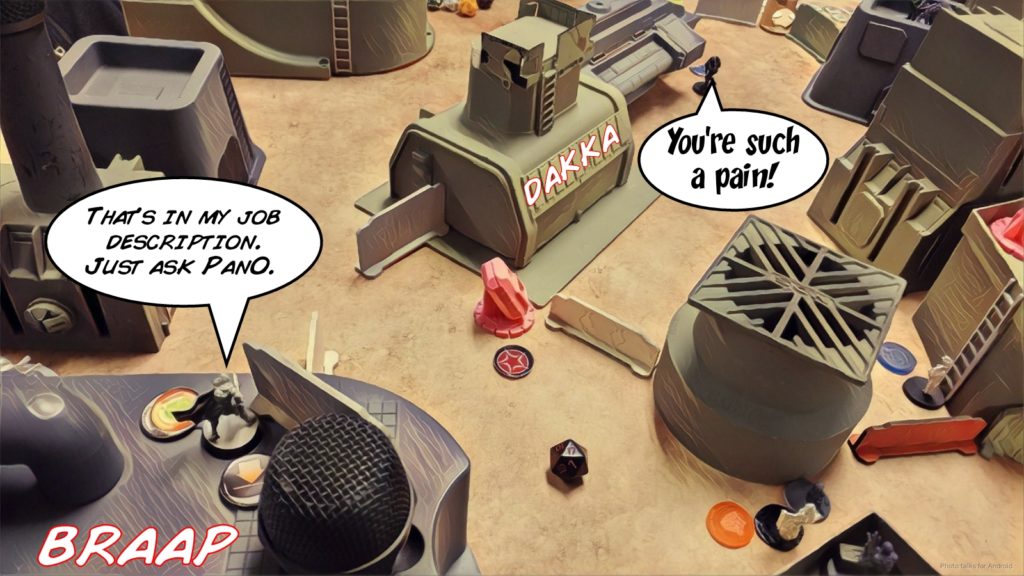 My Zondnautica is giving him a little trouble, as it can see the K9 team’s approach, so he tries to bait a discover out of me with his Strelok on the left, after re-camoing, but I don’t bite. 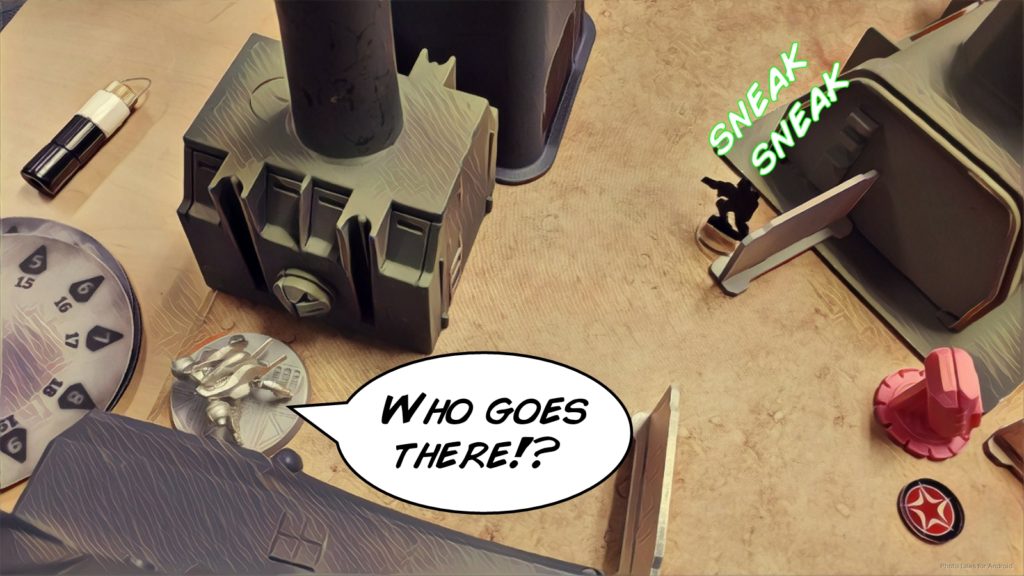 He eventually settles for just crawling the K9 team towards Mary to avoid being seen by the Zondnautica, but my Xenotech discovers the Antipode.

He then Trench-Hammers Mary off the table, but the Antipode dies to my remaining Moran’s Koala. 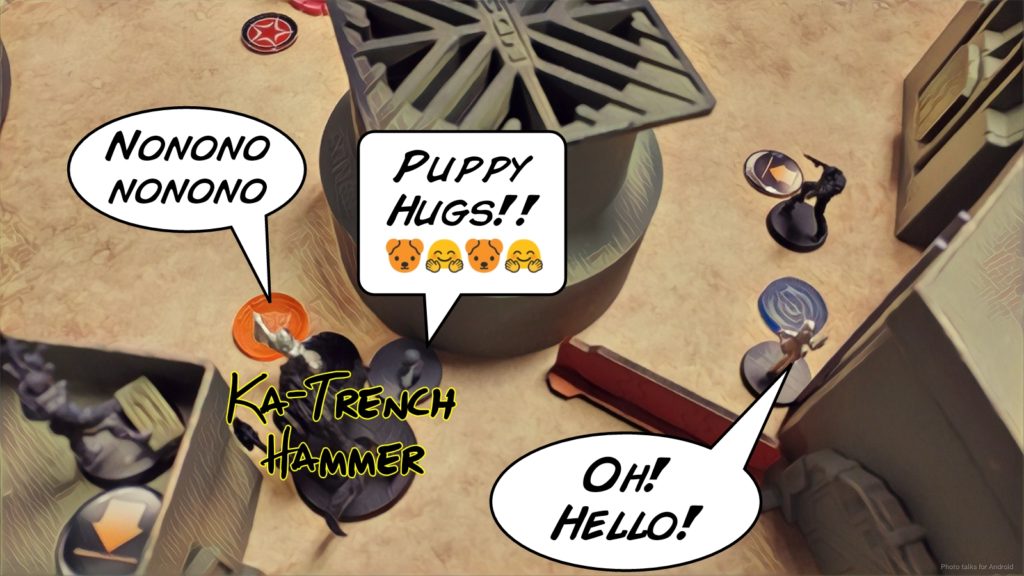 Apparently attacking with the Antipode drops the Strelok out of camo, meaning the other Koala triggers, taking out the Strelok as well. Not a fair trade, but at least I don’t have an Antipode in the middle of my table half anymore. 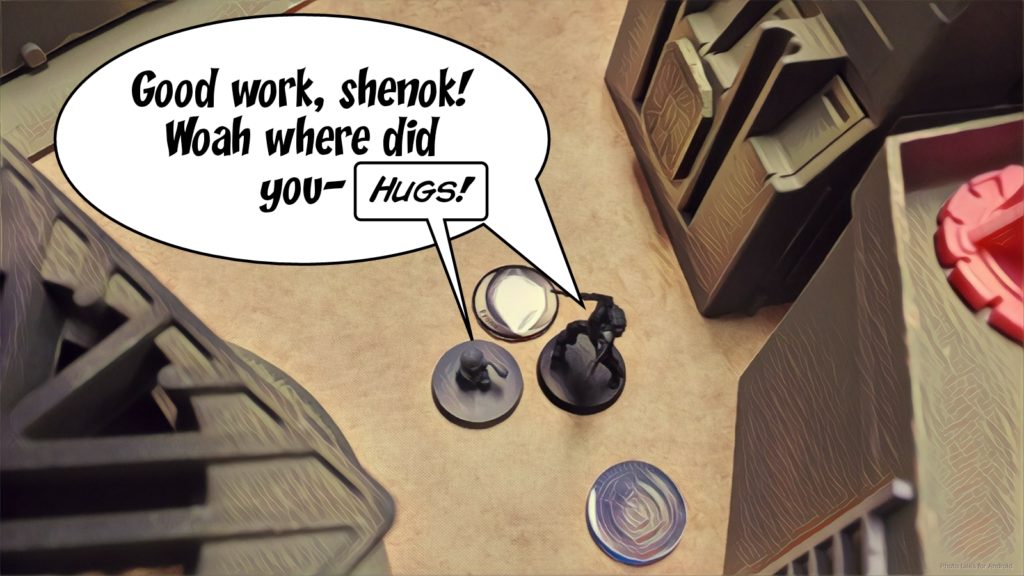 Interleaved with the action, and to give himself some time to think, Obi had spent a few orders attempting to drop his Xenotech’s Multiscanner, but fails this turn. He managed to get a dodge off for her on my turn as Pi Well jetted around, but I’m rewarded by him failing a few WIP rolls to make up for the order efficiency I gave him on my turn. Ah well. Obi passes the turn, with me down a DataTracker.

Even though Obi had retreated his Vet Kazak after taking out my Moran, there’s always an angle. This one was leveraged by my Kriza, who blasted the Vet Kazak off the table in one order. 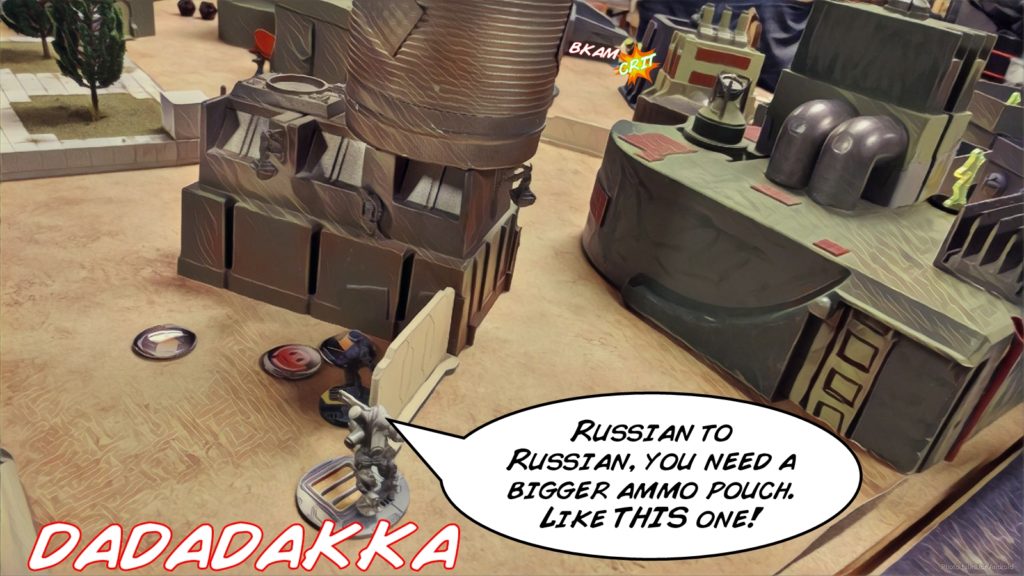 I need to get rid of that Scout BSG, so I do some quick mental math and come around the corner with my Moran. 3 dice versus 1, both on 12’s. Seems good, right? I win the face to face, but Obi passes ARM. 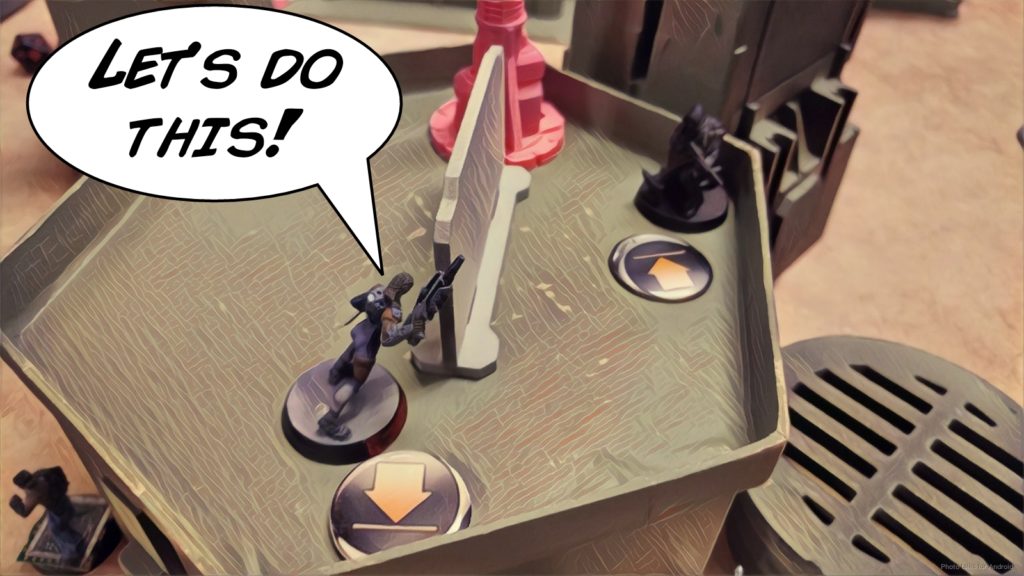 So I attempt to shoot the Scout anyway with a new order, but lose the face to face and get a faceful of mine, killing my poor Moran. I stop messing around and push the right button with Pi Well, discovering the Spetznaz’s ambush camo on the way, and then Sensor the Scout FO out of camo. 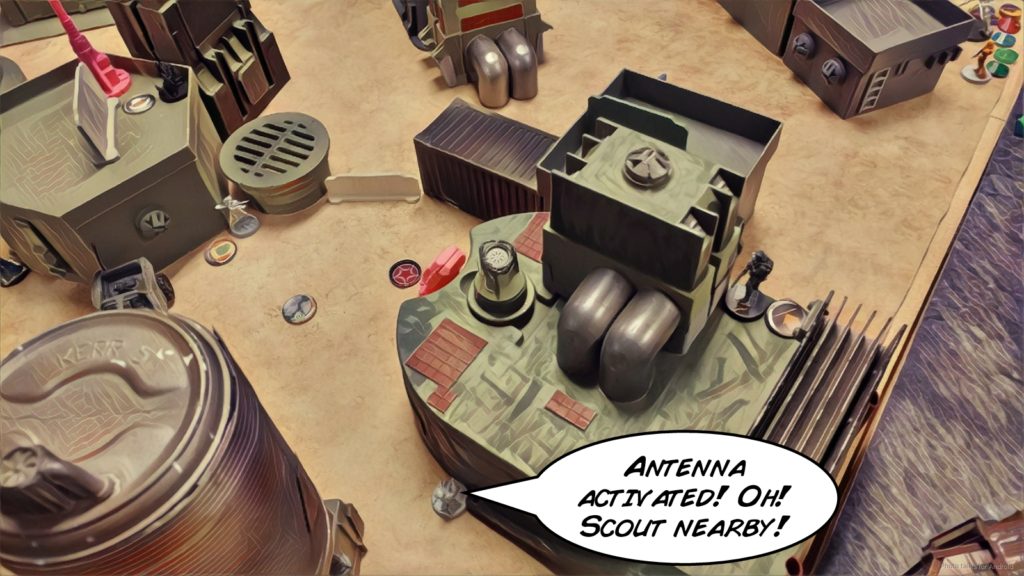 I’m out of orders at this point, so I just pass turn, disappointed with the way the fight in the center transpired.

Obi finally gets his Multiscanner down, advancing his Xenotech out of coherency with Voronin and simultaneously  creating a bit of an academic integrity kerfuffle… 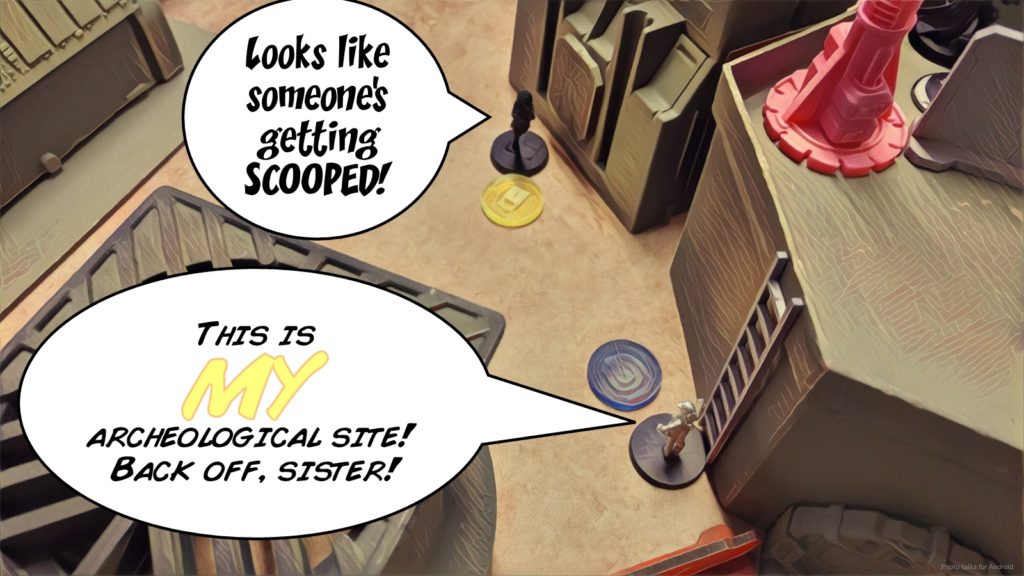 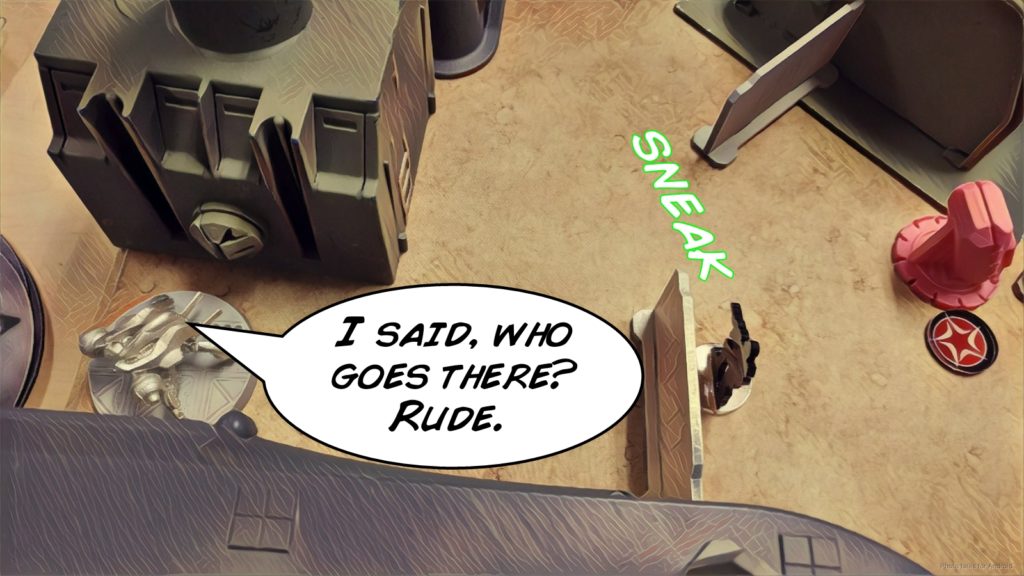 Then does so, stacking up a pretty awful situation on my poor biker as his remaining Vet Kazak comes trundling up the field to shoot the poor Zondnautica. I can’t pass ARM worth anything, and the T2 rifle knocks my biker off the table. 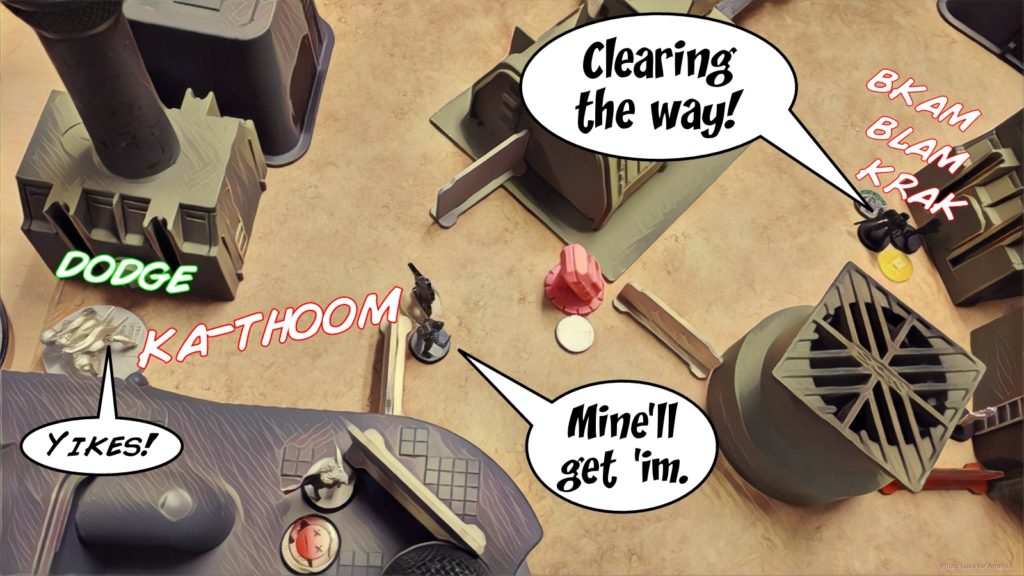 I had cleverly placed my Xenotech in the way of the ladder, so after attempting to sync with his own Xenotech and failing, Obi just syncs with mine… 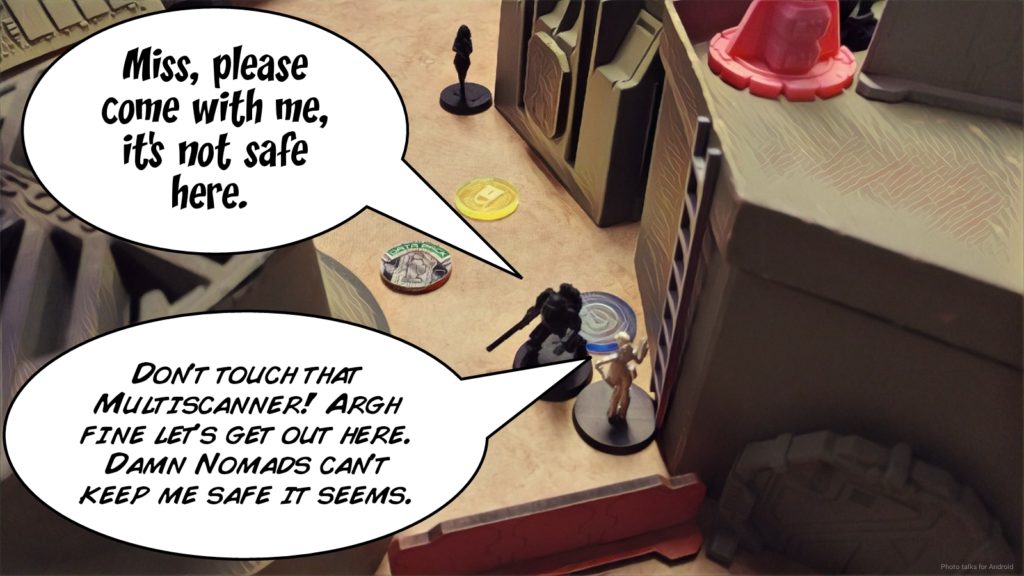 and absconds with her up the ladder to control the central objective. 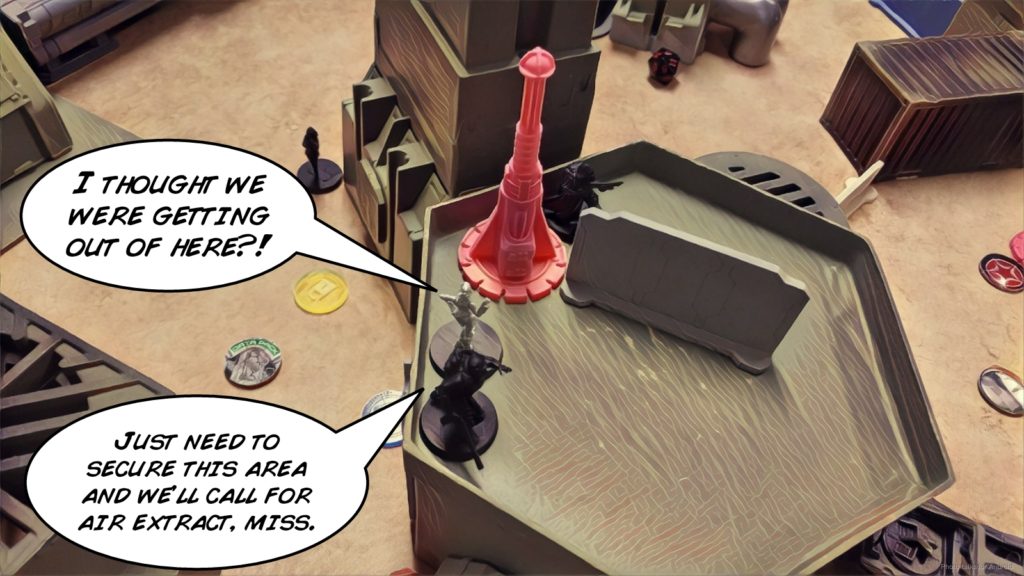 After dropping a mine to cover Pi Well with his Scout FO on my right, Obi puts his Strelok near my now-dead Zondnautica into suppression. Justifiably feeling pretty pleased with himself, Obi passes the turn.

I frown intensely, muttering obscenities under my breath as I peer around looking for a solution to the problem. At the end of the day, when in doubt, Kriza. I start things off by gunning down the Strelok on my left from outside of 24″ with my Kriza.

There’s a convenient ladder near the Kriza, which I use to get into position to see the Vet Kazak. I don’t have cover, and I’m inside 16″, but 5 dice is still 5 dice, and over the course of two orders, I gun down the Vet Kazak with a crit on each order.

I take out the Scout BSG over two more orders for good measure, then set about getting more points. I get my Interventor’s impersonation marker in position to body-block the mine covering Pi Well with his lieutenant order, then get Pi Well into position to control the right objective as part of a coordinated order… 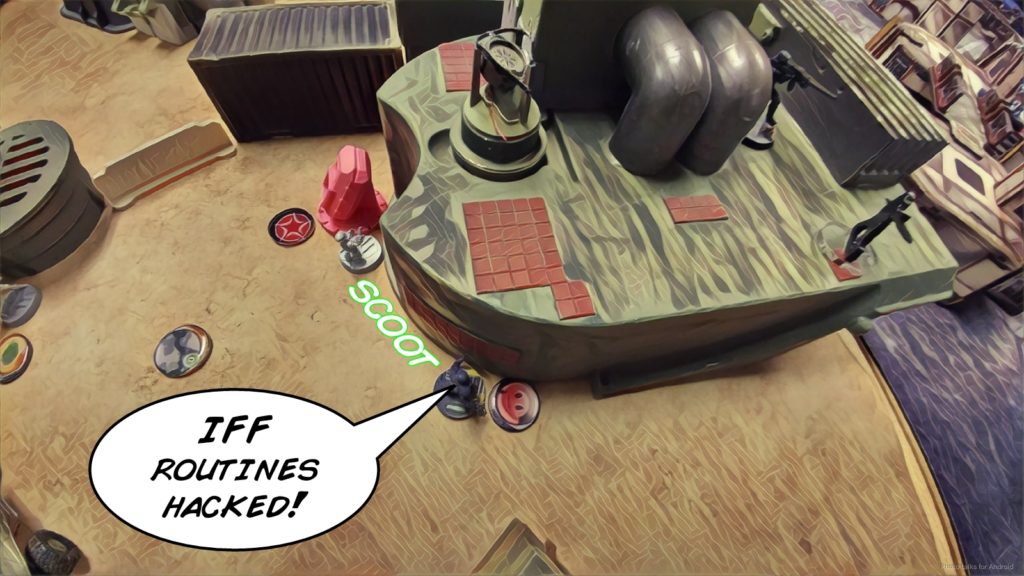 which moves Zoe out to ARO and stands my Intruder up.

Obi starts things off with a coordinated order, shuffling a bunch of camo tokens around. My Intruder fails to discover yet another Strelok on my left… 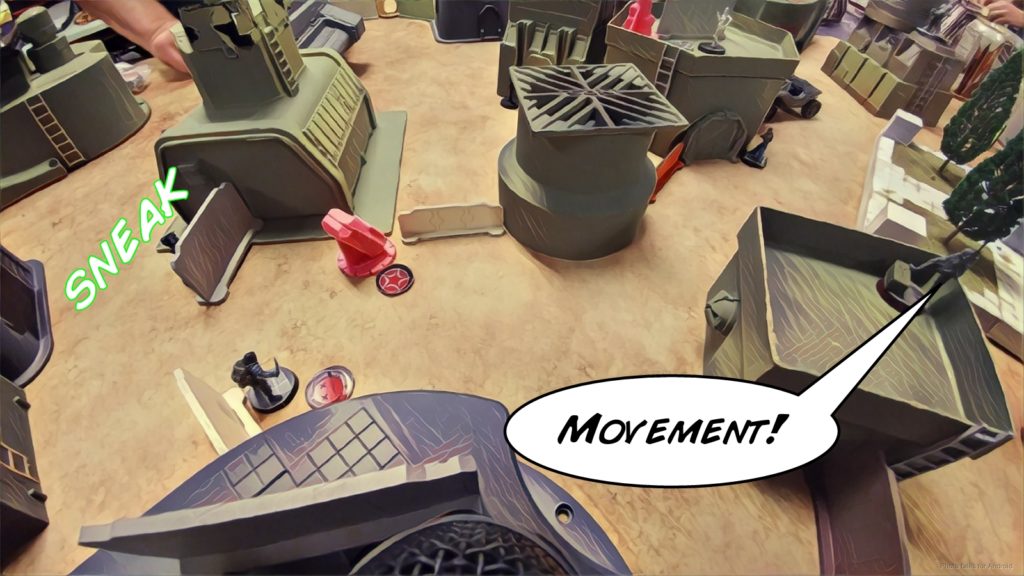 but my Kriza reveals Vassily with a T2 Marksman rifle on my right. 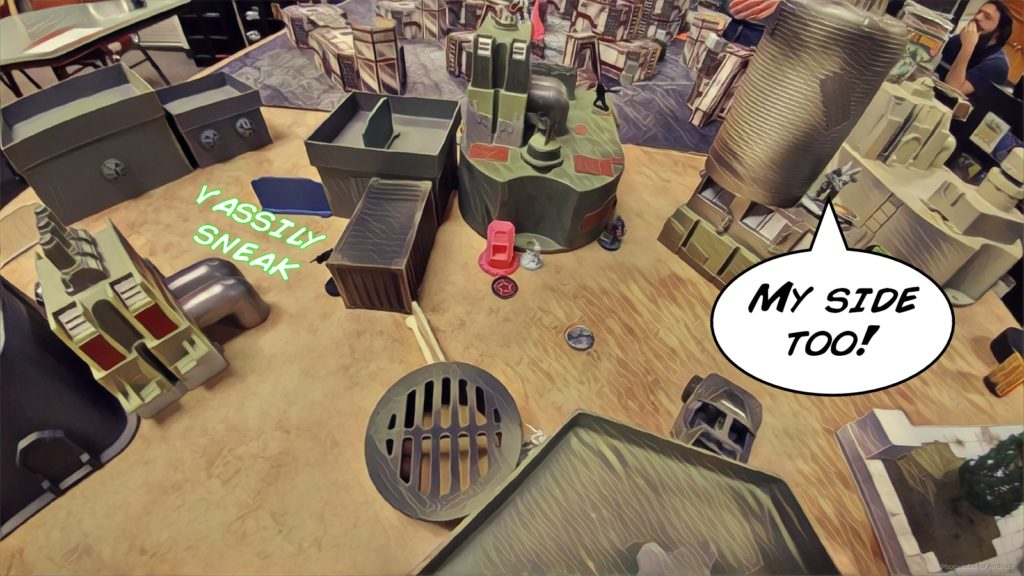 The Spetznaz HMG gets discovered by Pi Well as he scoots along, so now I’ve broken most of Obi’s camo schenanigans. 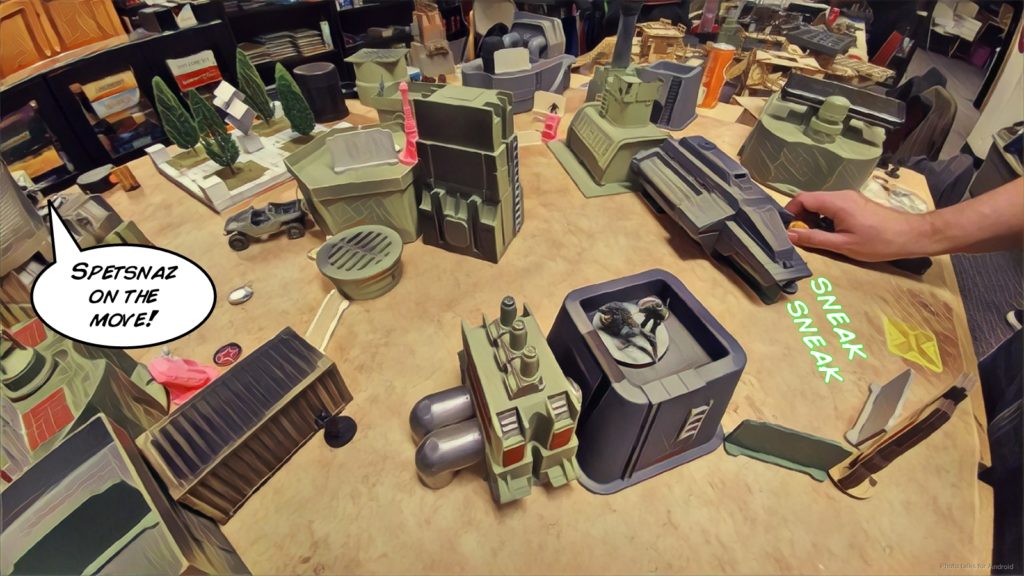 Obi then spends another coordinated order advancing the Strelok, Vassily, the Spetznaz, and the Scout FO, trying to overload my decision making process. Vassily and the Strelok are the most pressing threats, so Vassily gets the “bajeezus murdered out of him” as I put it at the time, dumping a viral mine, Aida’s SMG suppression, and shots from Pi Well and the Kriza into him. We only bother rolling the viral saves, and a fail there takes Vassily off the table. I delay against the Strelok with my Intruder, and Zoe fails a discover against him. 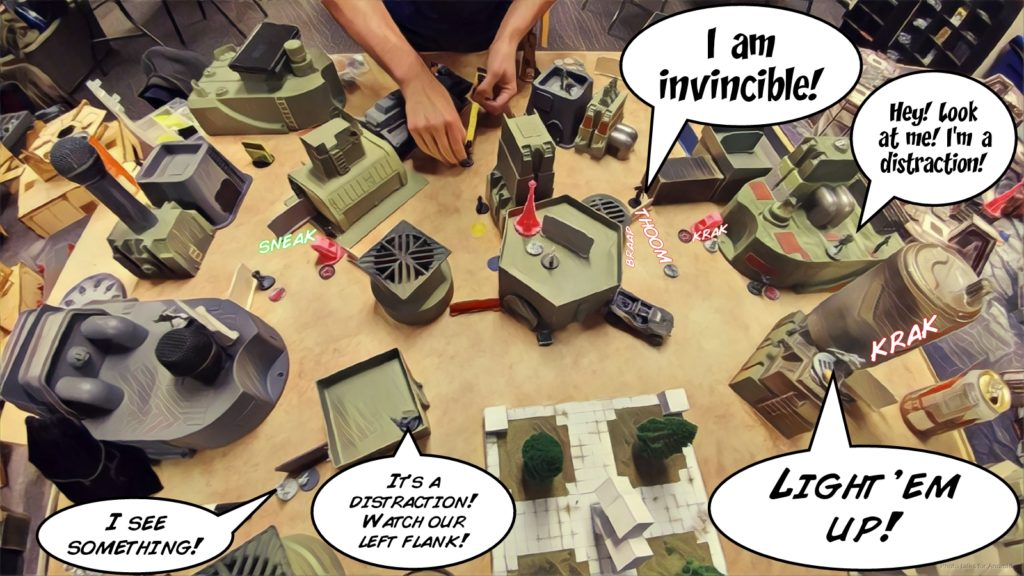 Obit then attempts to climb the ladder to the central objective with the Strelok, hoping I’ll fail my discover on a 17. I don’t. 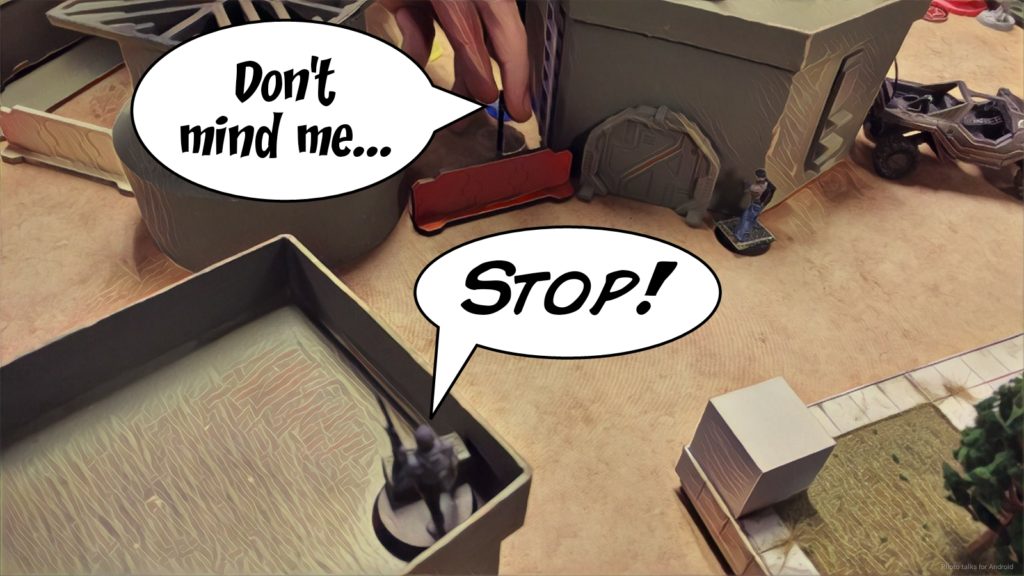 With his last order, he makes it into base to base with the central objective, declaring a dodge against shots from my Kriza and my Intruder. If the Strelok dies, I win 3-0 as I’ve activated both antennas and Pi Well is controlling an antenna. We pick up our dice. Obi rolls an 8, my Kriza fails on a 16, and my Intruder rolls an 8.

Dammit! Unfortunately, I didn’t put much thought into my HVT placement, so by controlling the central objective you also secure my HVT. Pi Well was a hair out of ZoC of Obi’s HVT, so this makes it a 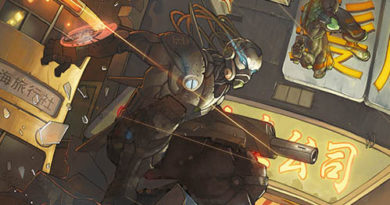