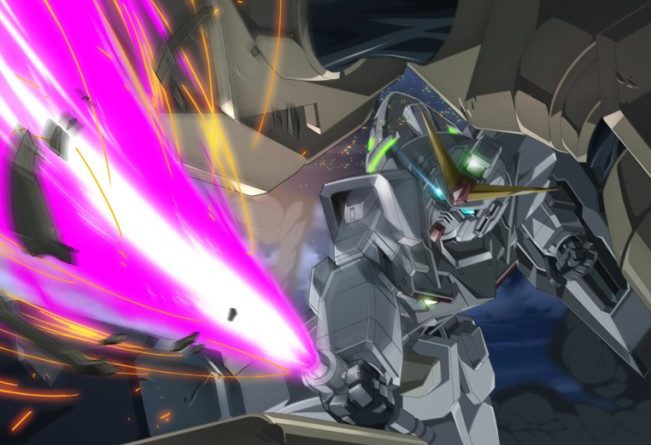 Froze my hands pretty good spray painting terrain outside, so I was all too happy to take a break and visit Adam to play a game of Show of Force in his slightly warmer garage. Adam has been messing around with a double Raicho list, and I’ve been looking for an excuse to put the ITS O-Yoroi I got from Emerald City Incursion Mk II on the table.

Let’s talk about the list. O-Yoroi Lt. It’s a TAG mission, which basically means limited insertion, so extra orders for the TAG is a good thing. Double Ryuken-9 SMG, because they’re amazing. Oniwaban, because your opponent will have a TAG, and they’re not allowed to have nice things. I’ve been pretty keen on bikes lately, so an Aragoto KHD to clear out any AHDs. The link, as always, is a bit of an afterthought. I took a Domaru Spitfire to have another shooty thing (bleh), Kempetai BSG for chain of command, Yuriko to fix your O-Yoroi, and then fill points with Keisotsu. I don’t super like it, and kind of want to try and fit in something like a Shikami, but those are pretty fiddly and hard to fit.

Adam’s list has his usual favorite link, this time with a Gaki to save points. He brought two Raicho for the lulz, and some assorted TAG support.

I won the rolloff and went first, so Adam gave me the side with more difficult access to the objectives and no good cover at 12″. I saw two easy ways forward on the table, both on elevated catwalks, so I set up my Ryuken to advance on those routes, with their mines flanking my O-Yoroi in the middle. There was a good movement-eating turn on the left to force my Aragoto to negotiate before getting into a firelane, so I put her there, and then it was time to put down the link. 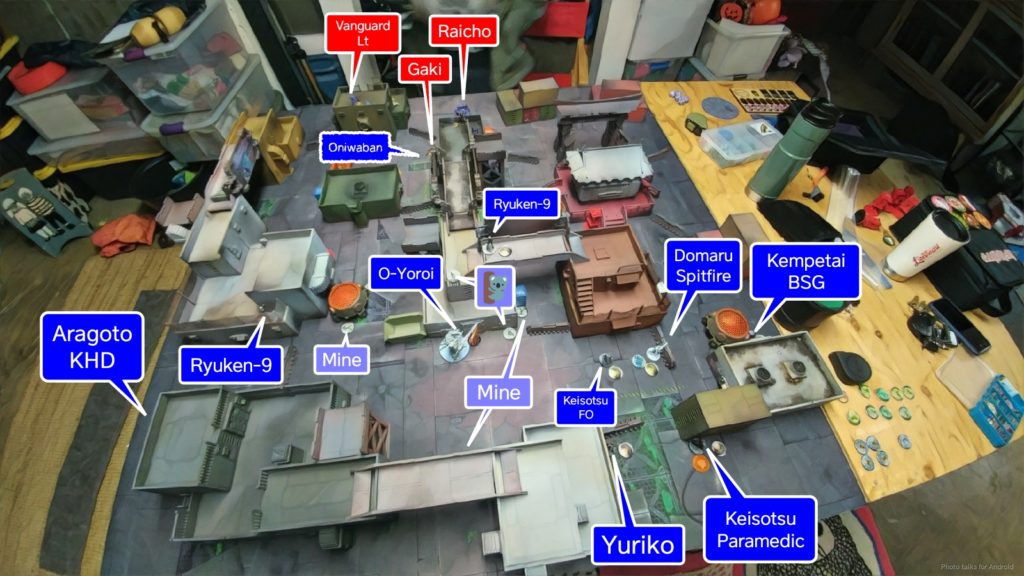 There really wasn’t a great place to put the link, given that there was no cover at 12″, so I tucked the important members of the link (the Paramedic and Yuriko) far back in my deployment zone, and then put my Kempetai behind a Nimbus generator. I had to leave the Domaru and Keisotsu out though. I put them prone to make things difficult, but they were definitely going to be the first to get chain rifled by a Preta if things didn’t go well.

Speaking of Pretas, it was Adam’s turn to deploy. He put his Oznat and Pretas on the roof of a building to protect them from the scary Ryuken-9. He chose the same central corridor that I did for one of my Ryuken. He struggled a bit trying to find a good spot for his Raichos and eventually settled on a shipping container fort on his left and a spot behind his Pretas and Oznat. The Gaki went on the right of the building, primarily to keep it from exploding on anything important.

Each of the Raicho got a slave drone helper, synced to the Kurgat hanging out on a roof, guarding the approach to Adam’s Vanguard Lt. The Rodok KHD just hung out on the right, without much to do.

I over-infiltrated the Oniwaban right next to the Gaki, on the other side of Adam’s deployment zone, and then Adam put down his Raktorak on the left of the building, ready to unleash his red fury.

As it turned out, the Nimbus generators were enough to hide my Aragoto from the Raicho, so I got my full movement with the bike’s impetuous order. The Gaki got a free dodge forward, but this wasn’t a problem. One less discover on my Oniwaban. 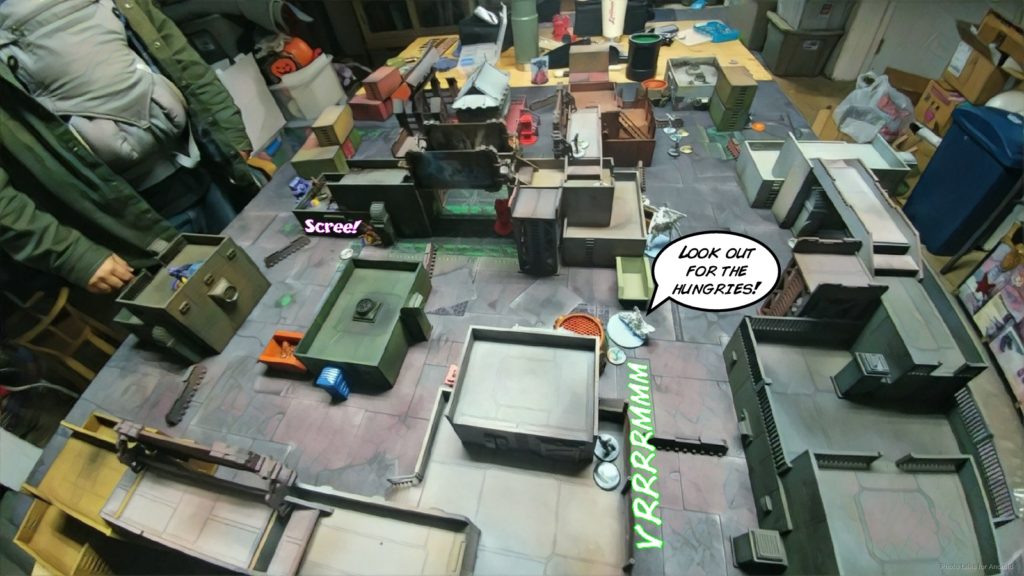 I wanted to get the Aragoto in place to take out the Rodok, but the Raicho was watching the path forward. I just went for it. I revealed the Oniwaban and move-moved it behind the Raicho, who delayed. The Rodok managed to discover my Oniwaban, but it was too late. One more order and the Raicho was beam saber crit off the table while the slave drone tried and failed to engage. 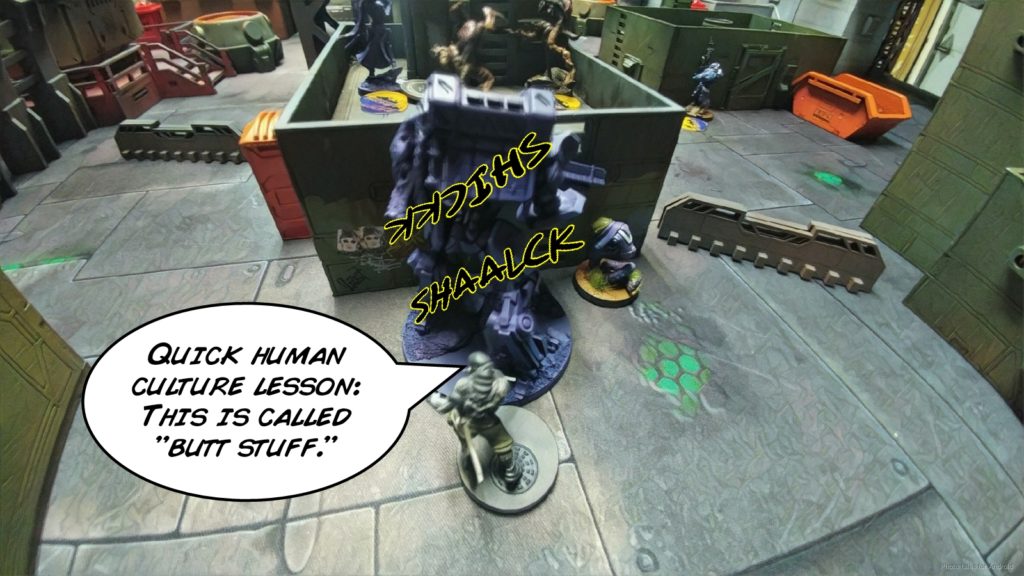 Now that the way was clear, it was time to go after the Rodok. The Aragoto took out the Gaki on the way in with her combi… 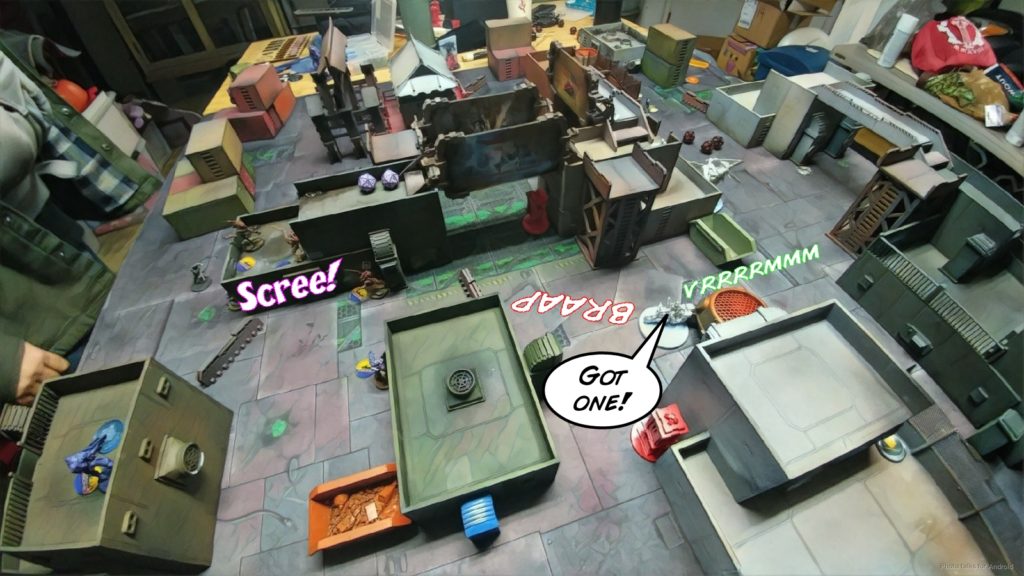 then crit-Redrum’ed the Rodok off the table. EI KHDs all having Maestro is pretty ridiculous! 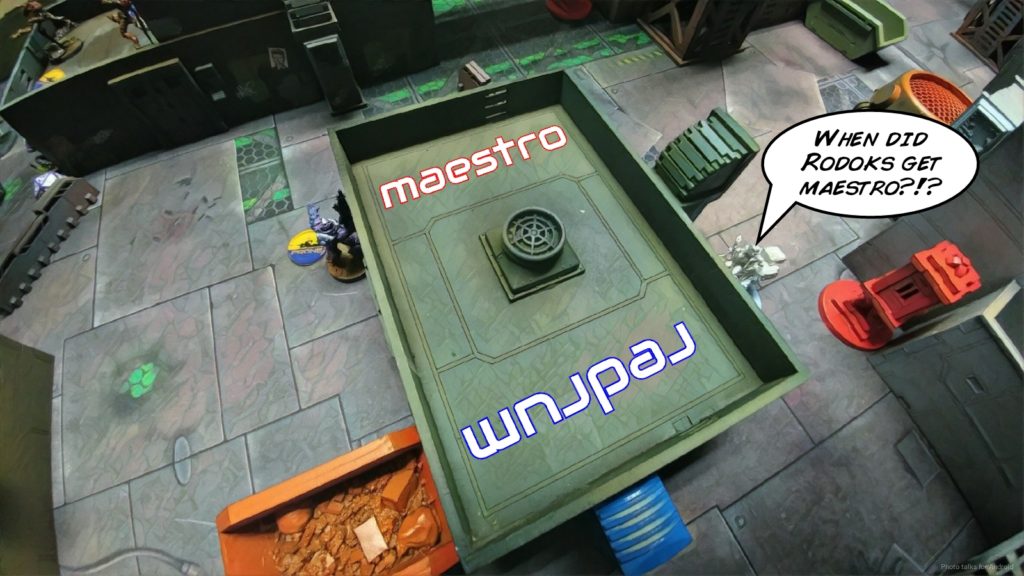 I count my orders and decide that I can go after the other Raicho if I can kill the slave drone next to it with the Oniwaban’s SMG in one order. This is mostly because I need to recamo to do it, and the slave drone is watching the good spot to do that. I fail on the first try (stupid Mimetism) and commit to the the other plan, which is to wreck as much of the link as possible. After moving back towards the right, finally taking out the slave drone next to the remaining Raicho on the way, I gun down the Raktorak with the Oniwaban’s SMG, then start making my way towards the Oznat. 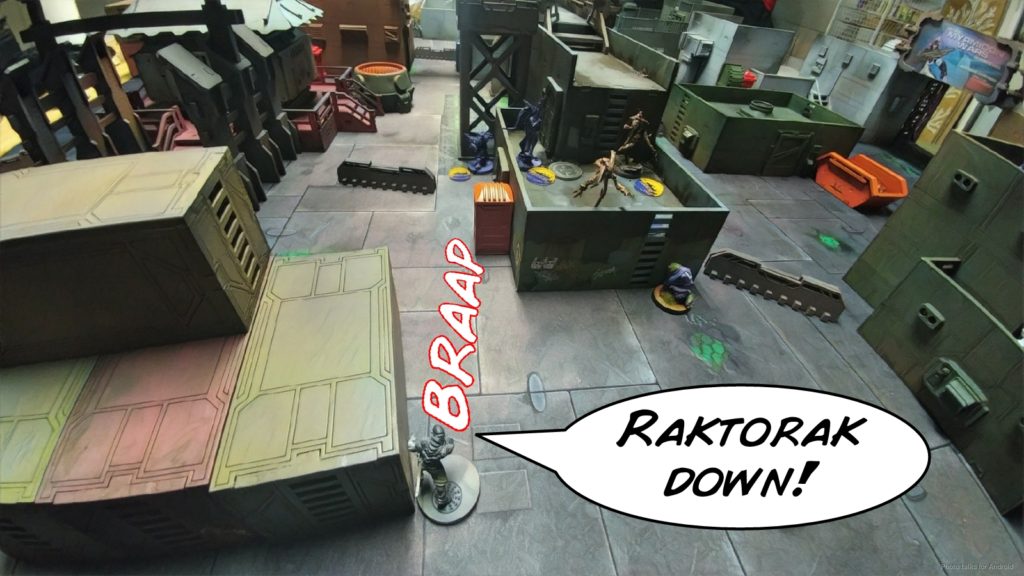 I have to get rid of the remaining slave drone to avoid giving it two chances at engage. I beat its first dodge-engage with SMG fire…

then I’m up the ladder. Adam waffles for a bit about what to do, voicing his thoughts of chain rifles and smoke grenades, before I remind him I’ve got a nanopulsar, so he dodges the remaining link team members including the Oznat, who is the leader. 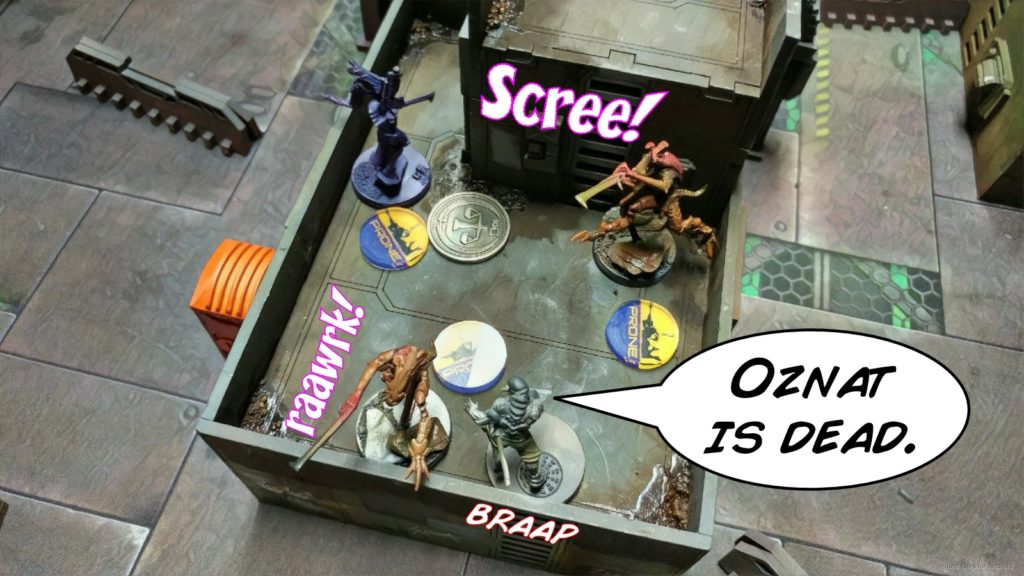 This is my last order, so I just SMG the Oznat and take it out. I throw my O-Yoroi into suppression with my Lieutenant order, and pass the turn.

Adam has three regular orders and two unlinked Pretas now, so he sends the Pretas screaming in at my Oniwaban. He’s got enough tools to force bad decisions, and I can’t nanopulsar them both. I elect to CC the Pretas as they come in, and both chain rifle me. It takes both of them to put down the Oniwaban, who at this point has killed five orders to the Aragoto’s two. 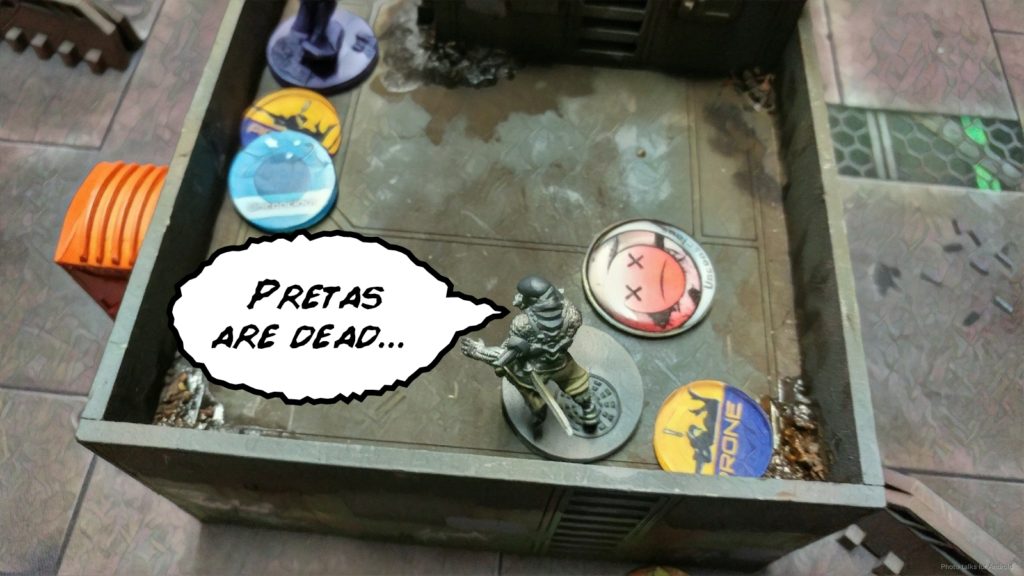 Adam flips the two irregular orders regular, giving his remaining Raicho a five order pool. After making an attempt to get ODD out of the Panoply and getting a breaker rifle instead, Adam tries to take out my Lieutenant, who promptly shoots him in the face doing a wound. 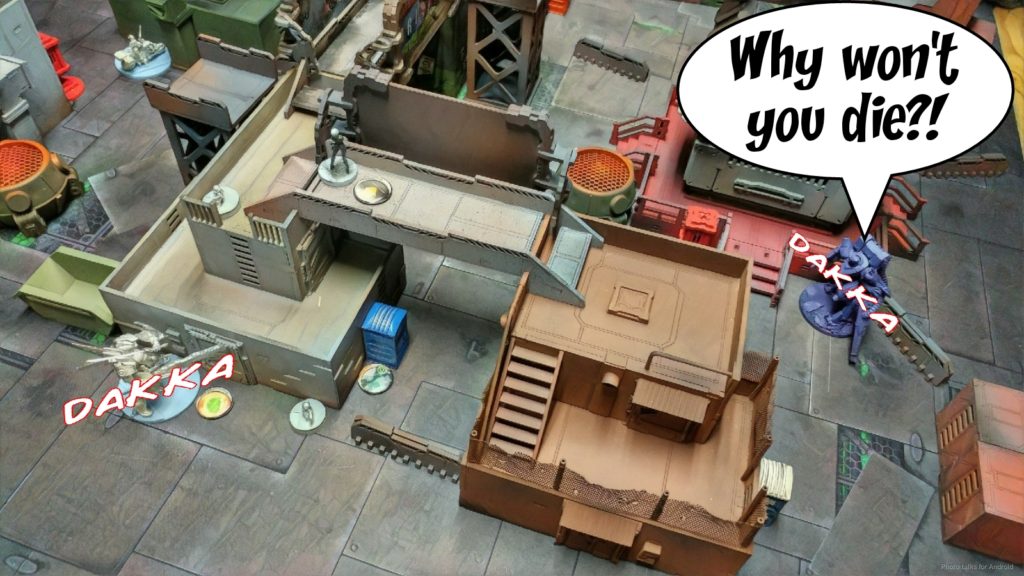 but not my Domaru, who lands a crit and four hits, which is enough to put the Raicho unconscious. You’ll see to the left of frame that I was sneaking Yuriko around to get a cheeky E/Mitter off if it came to that, and the Kempetai BSG was sneaking forward too (you can just see his head by the Nimbus generator).

Meanwhile, the Aragoto had rocketed towards the Kurgat and Vanguard. I hop her off her bike, climb the ladder, and shotgun down the Kurgat… 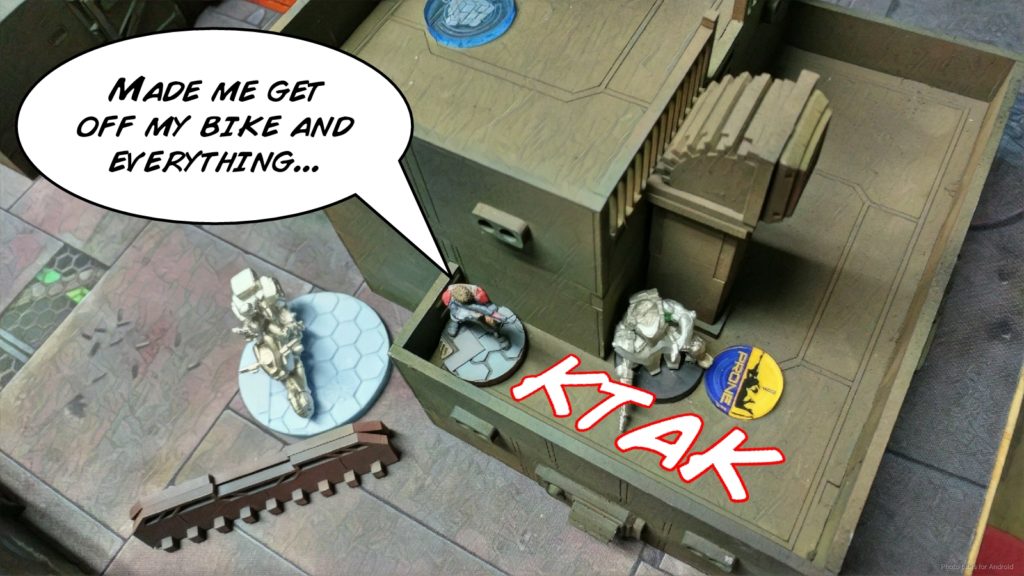 who drops a mine. I try to get by the mine to go after the Vanguard/DataTracker on the next roof up, but I fail to dodge, killing the Aragoto. BAH! 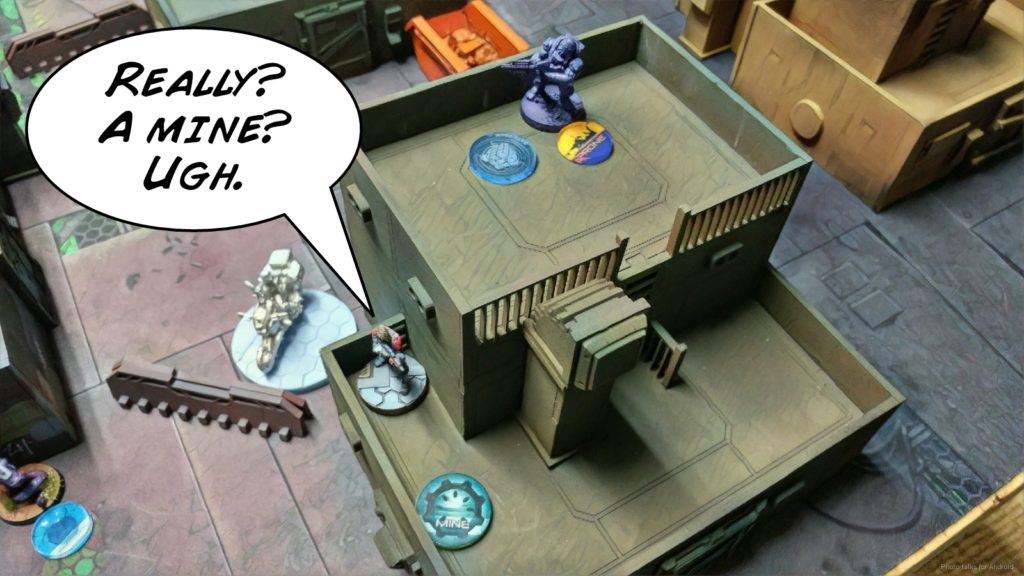 I don’t have enough orders to get anything else over there, especially after getting my O-Yoroi into base to base with the central objective, so we call it there after I investigate some LoF angles to see if my Ryuken can see the base of the Vanguard from a nearby building. She can’t, making it a 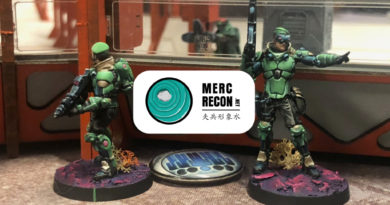 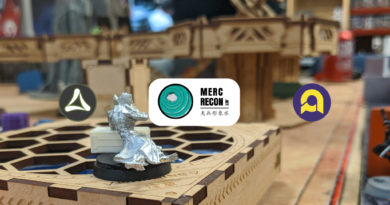 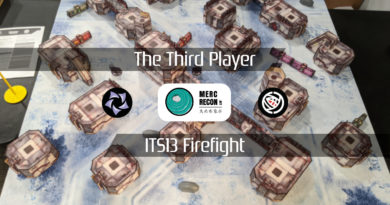