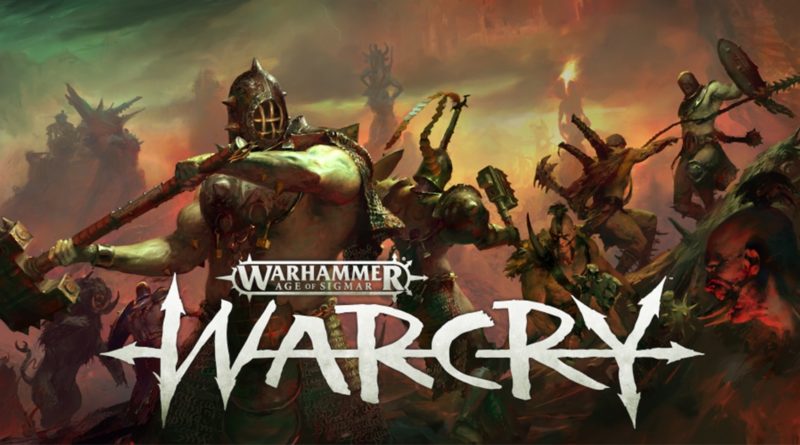 So, Adam got into a new game, surprising absolutely no one. I’ve long since learned that I can’t buy into everything Adam buys into or I’ll go broke, so I have to be careful. My general rule is I have to get a demo game in before I’ll buy into a new game, so Adam was kind enough to give me one of Warcry.

I haven’t really been into miniature wargames with fantasy settings, but the price of buy in for Warcry is pretty low–only ~$50 USD gets you a full faction.

Of course, this requires that you’re friends with a serious plastic/resin/pewter addict. They’ll buy the terrain and all the other gubbins you need for the game, so you can just mooch off of them after you buy just your faction models! Not that I would do that.

Warcry is marketed as a skirmish wargame, to fit the “new” genre of Kitchen Tabletop Miniature Wargame. Aristeia!, Kill Team, Shadespire, and Shadow War Armageddon fit into the same sort of niche. Basically something that’s got enough just tactical fat for you to chew on while remaining playable in under an hour while the kids are down for a nap.

It’s also fitting into my personal gaming experience as a sort of palette cleanser. I’m an Infinity player first and foremost. I’m definitely biased towards Infinity, as it is a hobby that isn’t a “solvable problem.” There’s always another rung on the skill ladder, another moment of introspection and improvement, and all the competitiveness I can stomach.

Therein lies the “problem” of Infinity. It’s very mentally challenging with the 30+ factions, hundreds of model profiles, complex rules interactions, weapon tables, etc. to remember and interact with. Sometimes I lose sight of the fact that it’s just a game played with other nerds and it gets too real–so Warcry has been a hugely refreshing experience. I love Infinity to death, and will continue to do so, but sometimes you just need a break.

So, here are lightning quick summaries of my first three games of Warcry!

My first game saw me fielding Corvus Cabal against Adam’s Iron Golems. The mission was very objective based. There’s four thingies, and if we end a round of play (there are 4) with me in possession of all four thingies, I win the game! If Adam can run out the clock, then he wins. Seems simple enough.

Warcry is based around a random scenario generator, which sets up terrain, deployment, mission, and then adds a “twist.” Our twist for this game was a chance to get zapped by terrain if we ended a model’s activation within 1″ of a terrain feature.

I took one look at the Iron Golem statline and the Corvus Cabal statline and decided it was a waste of my time trying to fight armored beefcakes with squishy birdmen wannabes. The Corvus guys have some neat mobility tricks though–one of their abilities lets them climb things for free, so I could effectively ignore terrain. Neat!

I immediately abused this fact to sneak three out of four of the treasure objective thingies out from under Adam’s nose by the end of turn two. At this point, he saw through my nefarious plan and built a wall of beef around the final objective. I’d have to send in my raven bois to peck their way though all that beef to get to the shiny treasure! Caw! Caw!

Since Warcry is an I Go, You Go alternating activation system, I abused some activation delay mechanics and clever bird man positioning to get Adam to open a hole in his defenses. I dove a Corvus cabalite onto to the objective, but there were just too many Iron Golem mans…

My poor bird got pasted, and Adam successfully ran out the clock. What I’ve learned from this intro game is that clever positioning, activation sequencing, and movement tricks can get you pretty far in this game. I threw a bunch of bird men under the proverbial bus in the mid game to get Adam to open up some holes in his defenses, so I didn’t have enough bodies to get the job done in the final turns. Time for Game 2!

Adam’s really jazzed about the Corvus Cabal himself, so he wanted to play them this time and let me play his Untamed Beasts. This time we drew some sort of objective destruction mission with a twist that all of our mans were worse in close combat–but importantly not worse in ranged!

This was relevant because the Untamed Beasts have a guy who is basically Scorpion from Mortal Kombat.

He chucks a pretty ridiculous spear at you and then can yank you towards him. What’s not to like? In any case, the mission was to secure an objective by being the player with the most mans on the objective at the end of a play round, at which point you could blow it up. There were 6 objectives, and if you blew up 4, you’d win.

The deployment was interesting for this one because some of our guys were delayed till the second turn, meaning objective placement and prioritization became very important. In any case, I fought some delaying actions and did some silly shenanigans with the Untamed Beasts’ lion/goat thing, which can move a whopping 16″ before you even start doing movement tricks.

After slogging it out with big bird for a bit, by the end of the game we had both blown up 3 objectives. After some fussing with the rulebook we discovered that the tiebreaker was murder. Okay, that seems appropriate given that this is a GW game about people vying for the attention of Chaos Gods. Scorpion guy was still alive at this point, so I just kited Adam’s remaining mans while hucking spears at him to win the game.

Okay. I’m sold on this game. What faction to play? Well, I didn’t want to buy the big starter box or any Age of Sigmar factions that got ported to Warcry–remember, I’m trying to mooch off of Adam here!

I’m a huge fan of sweet looking polearms, which meant I gravitated immediately to the Cypher Lords. The fact that they don’t look super Chaos also appealed to me.

Assembly was a little fiddly, but about what I’d expect from modern GW miniatures. The models are NOT very robust, lots of tiny attachment points and long, thin blades. That said, they look amazing.

It was time to give the game the most honest test of all–Adam texted me and said he had a 2 hour window for lunch and a game. The kid was with the grandparents and he was hungry and itchy for a game. Let’s do it!

We drew a really interesting set of cards. The mission was basically for me to murder a specific group of his guys–you sort your guys into three groups at the start of a game before drawing cards. The only thing was, the group in question (Daggers in this case) didn’t come on until the second turn, with the Hammers (another group) coming on at the same time!

This lead to some careful positioning but an otherwise quick first turn. By the time Adam’s Daggers showed up, I made use of the Cypher Lords’ movement tricks to get two of my guys into his face and KO’ed 2/3 of his daggers before he had a chance to even activate them.

Adam managed to sneak his last surviving Dagger away from my guys and shielded him with a bunch of his birds. I then misplayed the Cypher Lords’ Quad activation and only got one attack on the Dagger instead of two, which made all the difference later.

The last turn of the game had me chucking a bunch of Chakrams and Shuriken at his Dagger, reducing it to 3 HP but not killing it, giving Adam the win.

Well, Warcry is super fun. It’s exactly what I want from a Kitchen Tabletop Wargame. Varied mission selection so games stay fresh, super simple (at least compared to Infinity) rules, low model count, and epic stories that come out of interactions in the game.

Every game I’ve had so far has been close, often down to the last few activations, which means things are reasonably well balanced for two decently skilled players. I haven’t really experienced a blowout game yet, so maybe they exist, but so far things remain balanced.

So far, my experiences have indicated that positioning and movement tricks are really important in Warcry. Being able to suddenly hop over terrain or teleport a unit from 12″ away to be right next to something you need to gank are incredibly powerful tricks to pull off. The twists add a fun little narrative element but don’t seem to affect the game to the point of unbalancing it.

One very minor complaint is that the models are posed so dynamically so as to not fit in my favorite wargaming bag, the Battlefoam Beta Bag. Thankfully, the Warcry foam (which only barely fits my Cypher Lords after some cutting of the foam) fits beautifully in the Beta Bag. I can fit a whole 300 point Infinity list with JSA bikes in there along with a whole Warcry faction.

So yeah. If you’re on the fence about Warcry, I’d say get it. It’s an easy buy-in, especially if you can mooch access to terrain/the game board off the friend that’s been trying to get you into the game. If you already play Age of Sigmar, the buy-in is less than $10 USD to get the cards for your faction, so there’s really not much excuse there.

One thought on “Warcry First Impressions”