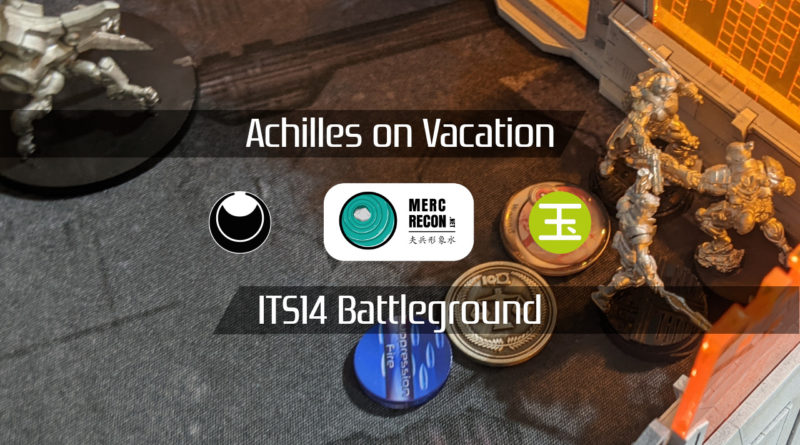 James and I wisely scheduled a game for after work so we’d have time to finish it! I arrived to a fun mega catwalk system setup of his table, as well as sort of a double objective room situation. Very neat! I’m in love with that LOSBLOCK objective room. I might have to pick one up for myself as it’s so versatile!

James and I decided to try one of the missions for the upcoming Mindtaker Miniatures Direct Action tournament in November. We randomly picked Battleground. For those who aren’t familiar, it’s just Frontline with altered scoring.

After watching this game of Tabletop Throwdown:

I’ve been wanting to try my take on Khavrion’s Steel Phalanx list.

I like the idea of Pandora following Hector, Acmon, and Phoenix around while Ajax and Achilles go beat face somewhere else on the table. I don’t think the list really needs much explanation other than that.

James decided to take a double TR bot list Knauf and Lunah. The rest of his SWC was spent on an EVO hacker and a Kuang Shi controller.

Krit and Bixie are both in the list, so that means there’s a Daoying Lieutenant to offer up those sweet, sweet NCO orders.

Since I was going second, I chose what I thought was the more defensible side. James has a fair amount of attack power, so he split it more or less evenly, but with perhaps a slight bias towards his left.

There was a TR bot holding down the ground level and another one protecting the “second story” of the table, i.e. they were both on different levels to see and contest different vertical levels of the table. I like this quite a lot, and it protects the two bots pretty well.

The Kuang Shi are pretty well distributed, as you might expect, and then the left side of the table had Lunah and the Lu Duan, and the right side had the Daoying, Bixie, Krit, and a Panguling.

I put my link on the left with Hector watching a roughly 16-20″ firelane on my left, with most of the other link members watching the back table edge. The two Lamedh extended my hacking area to the middle and right of my deployment zone, and then I basically “held” the near zone with one of the Netrods. I used Hector’s Strategos to hold both Ajax and Achilles in reserve.

James placed Knauf in an attacking position out of reserve, so I put Ajax and Achilles in a spot that I could use them to take out both Knauf and Lunah. I chose Hector as my Key Ops and James chose Krit.

I took orders from the smaller pool, which as I’ve said before I think is more disruptive. James decides he wants to take on my link, specifically Hector, by sending in the Beasthunter. He second short skill moves into cover, visible to Hector, and dares me to discover.

I take the bait and fail the discover, which allows the Beasthunter to keep moving with impunity. James informed me later that if I had passed, he would have tried to panzerfaust Hector. I think this is a pretty good plan. I give him an opportunity to panzerfaust, which he doesn’t take, by declaring Look Out, which allows one of my Lamedh to turn.

Pandora becomes the BeastHunter’s target, as she’s the link leader. The BeastHunter super jumps up onto the building and then goes prone, but gets discovered by the Lamedh.

The BeastHunter, now prone, swings in CC. I probably should’ve traded here and double-Pulzar’ed, but I forgot that she has a Pulzar and instead dodged to force the -6.

The -6 forced a second order out of James, but he eventually killed Pandora as the rest of the link dodged away.

Knauf then shot at Hector, presumably to earn the “kill the Key Ops” points from Battleground. Hector is a boss though and tanked the saves and broke LoF.

Bixie was the next attack vector, this time out of the second group. She started off by going after the middle Lamedh to deprive me of an order. I somehow passed ARM and failed guts out of LoF.

Pheonix was in a bad situation and out of cover, but again, the dice were with me and I was able to dodge out of LoF.

Every bit of order tax counts, and I had drained enough of Bixie’s available orders to force her to retreat prone to the stairs.

My objective for the turn is to deal with both the Beasthunter and Bixie. They’re both too dangerous to leave alive so close to Hector. Due to the lip of the building, Hector is able to see the Beasthunter while Acmon and Phoenix are safe, prone on the stairs. After reforming the link and moving into position, Hector discovers the Beasthunter…

then plasmas it off the table, passing his ARM save. Arguably James could have dodged standing to flamethrower the link, but forcing the discover is also reasonable?

Bixie is next. After informing James that I have an engineer in the link and declaring an “out and back” with Hector, Bixie successfully dodges the incoming plasma.

This goes on for a bit while I move Phoenix into position, but eventually I do and I use Phoenix’s mimetism to take out the first TR bot.

Hector continues to pressure Bixie who dodges out of LoF.

Her silhouette had been blocking LoF to Knauf on their other side of the midfield, so I take an X-visored shot and melt Knauf too.

With Knauf out of the way I send Hector in again and finally melt Bixie.

This opens the rooftops to Phoenix, who downs the second TR bot.

Not a bad turn! Hector took care of the Beasthunter, Knauf, and Bixie while Phoenix removed both TR bots. I’ll take it.

James has taken a fair bit of punishment by now:

He moves everything into group one makes an attack run with the Lu Duan against Phoenix. It doesn’t go well and the Lu Duan goes down.

Lunah declares Triangulated Fire against Phoenix and crits him, but I pass 2/3 saves and go prone.

Lunah repositions to the other side of the catwalk, and James tries to break the link before taking another shot at Phoenix.

He uses the NCO orders on Krit’s helper bot to pick up the Lu Duan and then shoots Hector in the back. I’m still ARM 8 in cover though, and pass all my saves, failing guts out of LoF.

Unable to break the link, Lunah goes for it. It’s my turn to crit, and Lunah is burned off the table.

James throws the Lu Duan and Krit into suppression and passes turn.

Achilles finally wakes up from his nap and shoots the Lu Duan outside of 24″, forcing it to break suppression and dodge.

Hector then downs the Lu Duan with plasma.

I do lose Phoenix to the Daoying’s shotgun though, which is less good. Hector puts the nearby Kuang Shi dogged, allowing the Daoying to dodge out of combat. Acmon drops the Daoying with a quick burst of combi rifle fire and both of them retreat to the zone just outside of James’s deployment zone.

Achilles and Ajax control my near zone and the middle zone.

James is in retreat, and Hector, Ajax, and Achilles are all at full health.

Even with baggage, Hector out points everything left on the table for James, so we call it at a

This was a pretty brutal game. I think James had a really good plan to attack my link with the Beasthunter, but he probably should have just thrown it under the bus to try and take out Hector. That would have basically stalled out my first turn with me being Loss of Lieutenant, and then he can keep the pressure up throughout the second turn with Bixie and the rest of his list.

I definitely was lucky with a lot of my ARM rolls this game with Hector passing a ton of saves. This is pretty likely given his statline, but still, not taking a single wound all game is pretty lucky. Basically I think James had one chance to take down Hector early on and missed the opportunity by instead going after Pandora first. After that, instead of using Bixie, I probably would have developed Lunah and gotten her into the fight and forced me to discover her on my turn.

That probably stalls me out in the midfield a little, and then Bixie can hit me on James’s second turn. I also think he should’ve dodged more aggressively to cover the link with her zapper. That’s pretty punishing for me. I wouldn’t give him the opportunity to zapper them all, I’d have to send in Achilles, but that does drain a bunch of orders and cause problems for me.

Long story short, I think James picked the wrong target to alpha strike. Sure, it’s hard to kill Hector in close combat, but if anything is going to do it, it’s a burst two EXP CCW. Then he has the Key Ops points, me in LoL, and run of the board, probably. I was probably a little too aggressive with my deployment there, but I got lucky. Killing Pandora is good, but it’s not as good as killing Hector, and I can easily absorb that damage. Then basically throwing Bixie to the wolves by leaving her so close to that monster link was a wild overextension. Yes she dodges on 18s, but eventually she’s going to roll that 1, and all it takes is 1 plasma hit to take her out.

I think James lost this game because he made a small mistake in target priority, threw away an attack piece (Bixie), and then bad rolls on top of that quickly snowballed into an unrecoverable position. Losing Lunah and the Lu Duan on his turn was brutal. Some things we talked about were using the celestial guard to set up smoke for the Lu Duan, perhaps, or even Lunah. That would have let him advance into flamethrower range and force me to dodge. Having a hacker to isolate Hector is also good.

Basically mistakes, however small, plus bad dice will lose you a game versus power units like Hector in a link. The fact that Hector and Phoenix basically soloed James’s army and Achilles and Ajax did nothing really showcases the power of Steel. If you give them a weakness to exploit and or an obvious target they will smash it flat. I felt pretty comfortable in my ability to project power on my right flank with Achilles and Ajax as well, I just never needed to since Hector and Phoenix were just acing things on that side on their own.

Anyway. James put up a great fight, and I think this was just one of those games where everything you try just doesn’t work and then you’re suddenly out of tools. Thanks for reading. 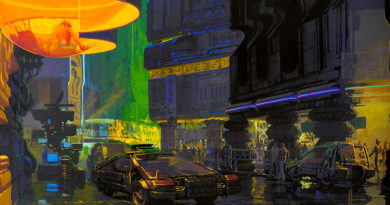 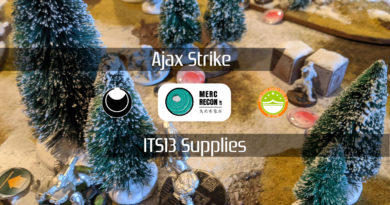 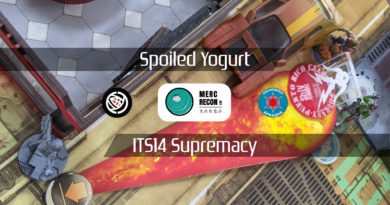 One thought on “Achilles on Vacation”