I’ve managed to get a bunch of games in over the last few months, and a reasonable amount of hobby as well, mostly assembly. I’ve been trying to clear my Nomads backlog, so I can get to painting and then finally move into my Haqqislam and start Heavy Gear. Oh yeah. That’s happening too. Some of the local Infinity crew are getting into Heavy Gear with the “recent” kickstarter and offloaded their CEF and Caprice on me. Sprues for days! Look for more on this in the coming months. 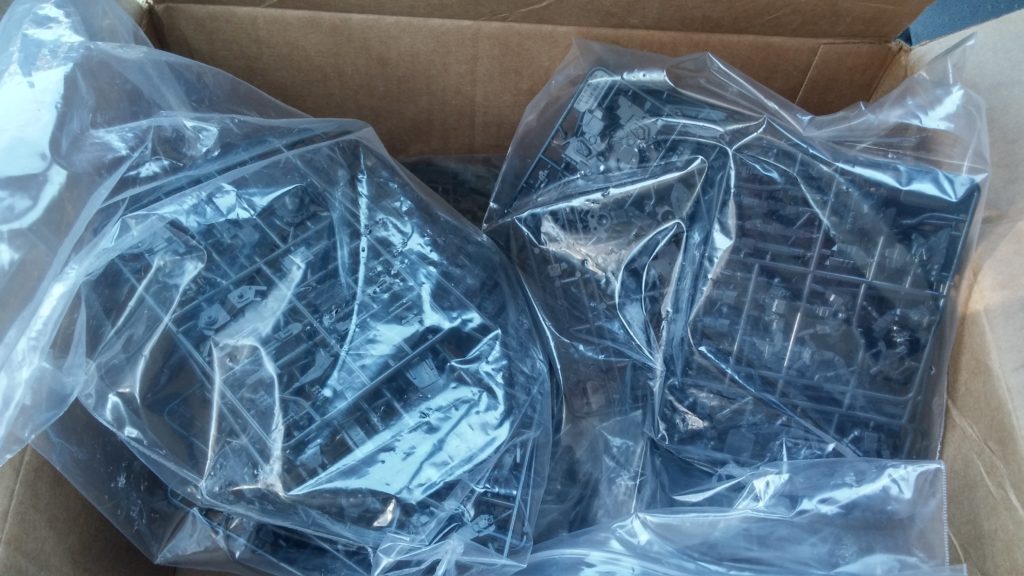 I started my Nomads assembly push because I wanted to play with Lunokhods and Tsyklons. Once those came together, it was time to put together an Saylut EVO and get my Overlock on… it didn’t go well. 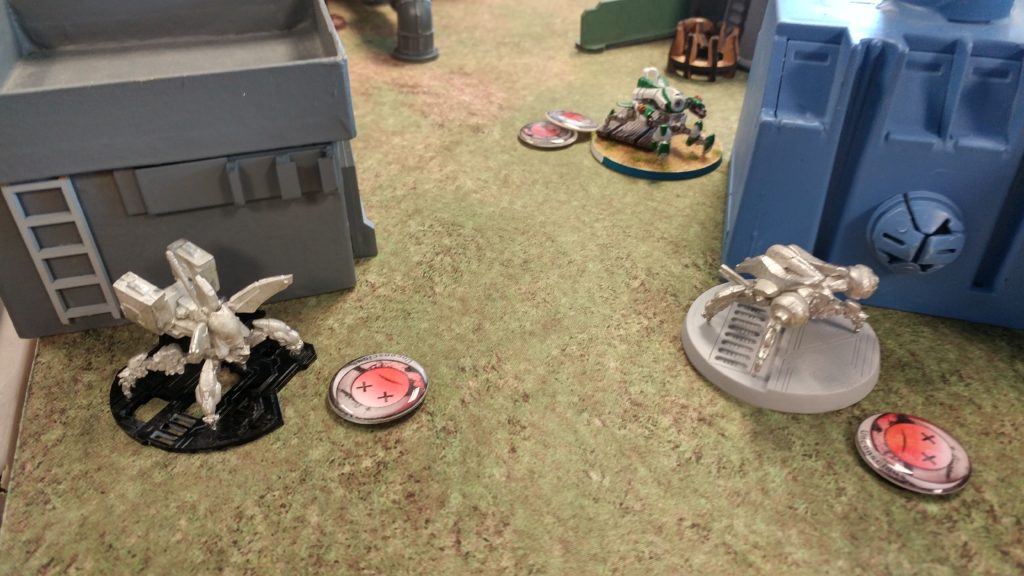 Since I started with Corregidor, I’ve been a bit light on Bakunin units, at least in terms of assembly. I bought Bran pretty recently and threw him together. His tail keeps breaking so I might just dispense with it entirely. Not much conversion work here, but I threw on a random Zond antenna for… reasons.

I also bought some Tranductor Zonds off of someone getting out of Infinity, so I’ve got quite a few REMs now. 2x Tsyklons, 2x Lunokhods, 2x Transductors, a Reaktion and a Vertigo. I need to put together a Stempler and another Reaktion at some point, but I’ve been okay with proxying the Reaktion as the Stempler so far and haven’t wanted a double TR bot list. With all these bots, I needed an engineer for them! Might as well get the best engineer option we’ve got, Zoe and her buddy Pi Well.

I really don’t like the Pi Well model. It looks very derpy and toy-like, but this means I finally have a purpose for my Rocket Racoon Heroclix model. I threw him on some scatter terrain to increase his height and make him look S2. Red Veil Yuan Yuan and limited edition Miranda Ashcroft for scale. 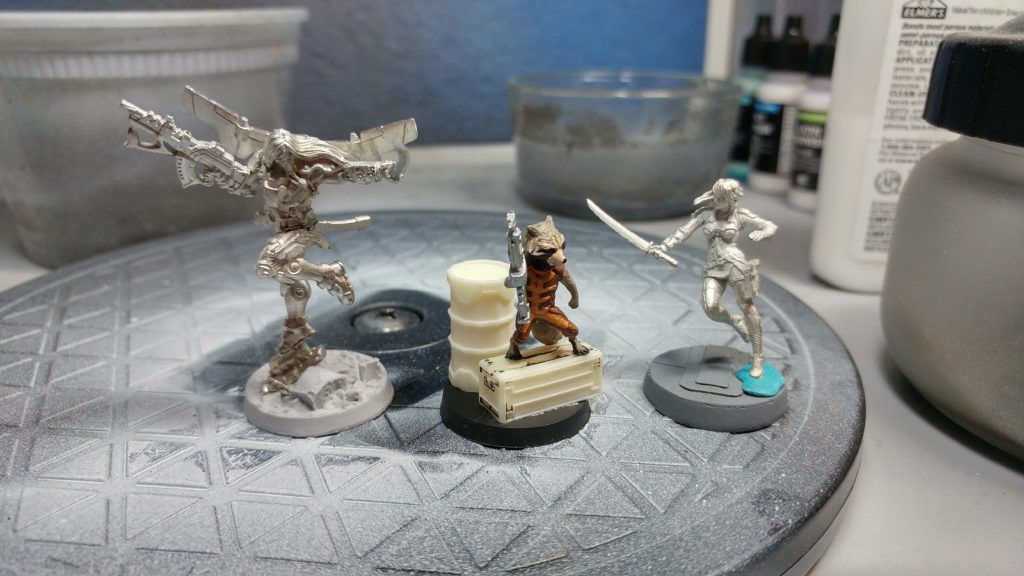 Oh yeah, I threw the Yuan Yuan together too. His pose is ridiculous. It extends so far in either direction from his base that it makes it hard to store, especially with the thin, bendy sword. It’s a pretty sweet looking, but it’s definitely designed to look awesome as opposed to being practical.

Speaking of hard to store things, all the Morlocks have all these big poky bits sticking out. McMurrough is also a terrible offender with his giant sword. But man, do they all look good.

I really like the elf Morlock, she’s my favorite. The pose is great, especially with her flowing cloak thing. McMurrough looks pretty cool too. I do appreciate how they have two points of contact for his tail, so it doesn’t just snap off all the time. The same can’t be said for Bran’s tail.

Since the September tournament was a Soldier of Fortune tournament, I threw together the rest of my not-Fat Yuan Yuans in preparation. The new Yuan Yuan wings are much more robust, as they’re a single piece. The lady Yuan Yuan’s wings are literally just glued on by surface-to-surface contact, really more of a plane to cylinder interaction going on… I’m afraid I’m going to break her one of these days, and of course it’ll happen after I paint her!

I converted up a Moira E/M LGL using the Alguacil LGL arm, and I like the results. The weird pigeon-toed footwork is a little… strange, but I am a fan of the way everything turned out overall. The LGL is barely on there, it’s snapped a few times and is basically impossible to pin so I’m just… going to be really careful.

The new Moira from the Bakunin starter is a good fit with the older sculpts. She’s got a bit of tactical rock going on, but there’s a bunch of religious-y text on the rock, and I had a base handy that looks like it might be part of an Observance shrine so it worked out. Finally assembled my Moira HMG as well. Such a great gunfighter.

After a long break, I finally got a moment to sit down and go on an assembly spree. I put together some more of my favorite Jaguars, a SWAST, Deadpool, and kitbashed a few things together. I even made my Impersonation token, which I’ll paint up as a Team Fortress 2 Spy eventually.

Here’s a closeup of my Moderator Pitcher kitbash, which I like quite a bit. It’s subtle and kinda natural looking, if you didn’t know what you were looking at. The other nice thing is that I can now use the Moderator Pitcher’s arm on my Rev Custodier to have an alternate sculpt.

Here’s what I ended up doing for my alternate Reverend Custodier sculpt. I reposed the Moderator’s gun arm (that gun is HUGE) and then stole the Bandit’s arm, which is …. a little small. I had to hack off the Custodier’s arm but I think it looks good if you ignore the really awkward scale shift in the arms. 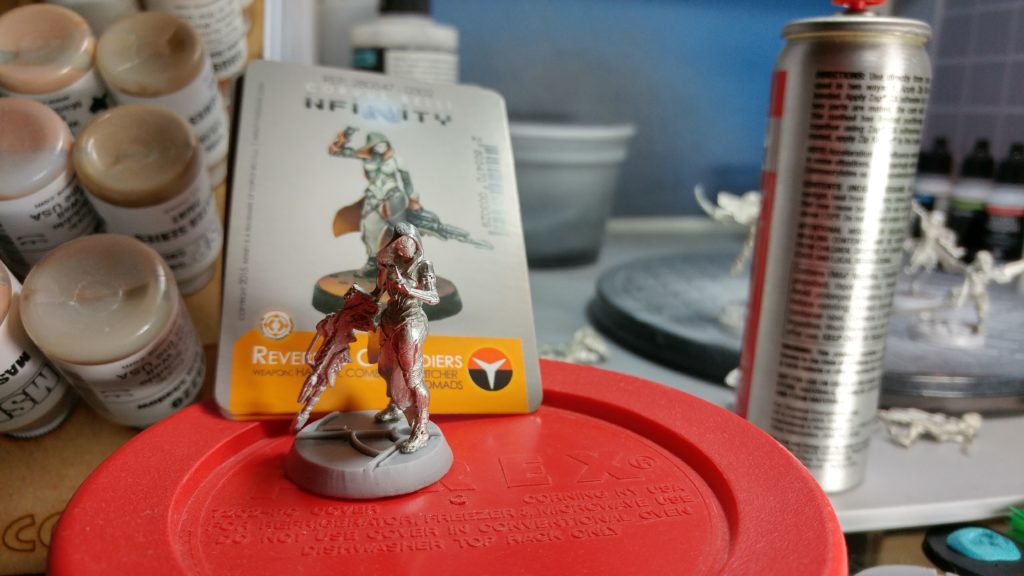 Rather than have two identical sculpts for my two Bandits, I carefully shaved off the shotgun, put it in an Alguacil’s hand, and then spent a bunch of time carefully reposing the model. The shotgun seems to refuse to stay in her hands, so I’ll probably have to greenstuff it in there or something. It’s fallen out a bunch of times already. It was easy to bend the knees and ankles of the model, but really scary to try and bend her hip, so I gave up after kinda getting a lunging from the shadows pose. It looks kinda weird in person up close, but it looks okay on the tabletop.

I am absolutely in love with what I did for this alternate Clockmaker sculpt. He’s practicing good muzzle discipline while looking at some sort of readout on his iPad. I stole an Icestorm Alguacil combi rifle, but the rest of the kit is original.

I’ve spent a ton of time assembling now, and I was getting pretty sick of it, but this kitbashing thing is really bringing new life into that aspect of the hobby for me. I hope to finish assembling the rest of my Nomads so I can move onto my Haqq (and I finally bought bases for my Haqq so that might actually happen soon).

Let’s just ignore the fact that I have a pile of other game systems and their minis to assemble too… Thanks for reading, hope you enjoyed!