Today we’ve got another guest batrep from our friends in Humboldt County, California. This time, Clint writes about facing some Ariadna schenanigans! –WiseKensai

I won WIPsies, I chose to deploy second and the table edge (the one on the left). I did this both for the achievement associated in our escalation league, as well as expecting Ariadna to have a LOT of camo tokens, which I wanted to see before I threw down my own guys. And Gus did not disappoint.

He chose to play second, and then starting placing down tokens, starting with 2 inferior infiltrating Grunts, trying to hangout in my Deadzone. 1 succeeded and the other failed, getting relegated to the back line hiding behind a building. He deployed his first Irmandinho and its Booty roll was an EXP CCW. This ended up being more relevant than I was expecting (Spoiler alert). His other Irmandinho got an Adhesive Launcher. Then there were camo tokens everywhere. He kept his HRL in reserve.

Then it was my turn to deploy. I was expecting Van Zant shenanigans, so I brought two of my HMG Chaska Auxiliars with Neurocinetics and 360º Visor. I placed them to cover most of the back end of my deployment. I also made sure to bring my Nikoul, for her sweet, sweet Sapper, MSV1, and Viral Sniper. I placed her on top of a building right at the edge of my deployment zone, with the Warcor already visible. I was expecting these three to hold the line on my side.

I got a Fireteam: Triad in the building on my far right (Spitfire Gao-Rael, Makaul, and Kamael Paramedic) and a Triad on my left (Aelis, Makaul, and a Kaeltar). I brought Aelis because of her sensor (again, I was expecting camo shenanigans) and she has that Viral Combi.

My Sakiel, 2nd Kaeltar, and 2nd Kamael Paramedic were orphaned, because I derped and had them split up across combat groups. I should’ve switched the Kaeltar and the Nikoul, but you live you learn. So they kinda ended up in random locations. The 2nd paramedic I situated near the Rasail in the center and prone, the Sakiel was hiding behind a box, and the last Kaeltar was in the crater.
Symbiomates went on Aelis, Nikoul, Rasail, and Gao-Rael.

I spent a command token to reduce his Order Pool in his second group by 2.
His Irmandinhos moved up, the one with the EXP CCW just moved further up the board, with a Move-Move, and the one on the right climbed the stairs a little and threw some smoke.

He spent a command tokens to move 4 of his camo guys, and then informed me he was revealing them. I, in my blissfully ignorant state, was confused by this. They revealed to be the two Chasseur Minelayers and the 2 FO Foxtrots, and he dropped FOUR mines!!! And then he did it again! So at this point he had 10 Mines on the field. The entire middle of the field was camo tokens by the end of his turn (he re-camo’d up a little later in the turn).

One of his Briscard’s traded shots with my Nikoul Sniper. With the saturation zone, it was pretty even odds, but his Briscard lost after making me pop a Symbiomate.
He spent some more orders to move his EXP CCW Irmandinho, one of his Chasseurs, one of his Foxtrots, and a camo marker up the board. He was now within striking distance of his civs for next turn.

I took my far-right Triad, and scooted up to the wall, getting ready to take out the Chasseur that was dangerously close. He successfully threw down some smoke, so I spent another order getting my Makaul in base-to-base. Big mistake. 1) I was unaware that Irmandinos were very solid CC pieces, and 2) I had smoke cover and a guy with MSV2, that I should’ve shot with. Long story short, I lost my Makaul, to the EXP wielding Irmandino and then took him out with my Gao-Rael. My Kamael Paramedic ended up tripping off a mine also, so that Triad was toast. Luckily my Gao-Rael came out of it unscathed and still had his symbio-buddy.

Aelis became Triad leader on the left and scooted to an edge of a wall, killing a Chasseur after it revealed and the the left-most camo marker, using Aelis’ sensor.
I also used my second combat group to move one of my Chaksa’s up and put it into suppressive fire covering three of the civs.

Lastly, I used my Lieutenant Order to move the Rasail further up the board.

I had managed to take out a few of his orders, and I think he took this opportunity to kill my Gao-Rael, and my Sniper, losing his Warcor, and pulling his Grunt out of hiding in the back. I honestly don’t really remember what else happened here.

Most of this was spent moving my Rasail over to the right side of the board and marching up through it. I used the Chaksa buddy as mine-bait, but it ended up being fine, and between the Rasail’s Viral Combi and the Chaksa’s flame, I managed to clear out that area, get to a civ, and pull it back to my deployment zone.

Took out one of my HMG Chaksas, and then HE appeared.

Van. Zant. Popped up behind my Kaeltar, took out my other HMG guy, took out one of my Paramedics and shot at a Sakiel. Sakiel survived and warned everyone else (my Rasail and his Chaksa, mostly) that he was there. He tried for a rush for a civ, but was gunned down.

Then he took his Chasseur and got in base-to-base with a civ and managed to sync him, after a failed attempt.

Took out his Chasseur with my Sakiel. Used Aelis’ triangulated fire on his Tankhunter in the back. But the Grunt took him down, breaking up my fireteam over there. So the Makaul went over and tried his hand at it. Threw smoke, but didn’t cover the Grunt. Makaul also went down. So it was Kaeltar’s turn. Got close, but did not end up making it to the civ.

So at the end I had a civ in my deployment zone for 3 points. Neither Gus nor I did our classifieds, but I should’ve ran a guy to Secure his HVT, since mine was difficult (had Sabotage and picked a building that ended up being very well-defended). 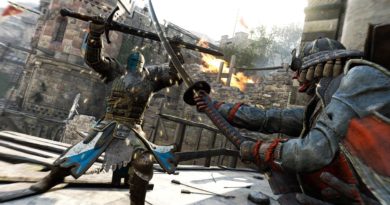 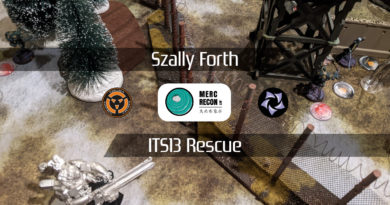