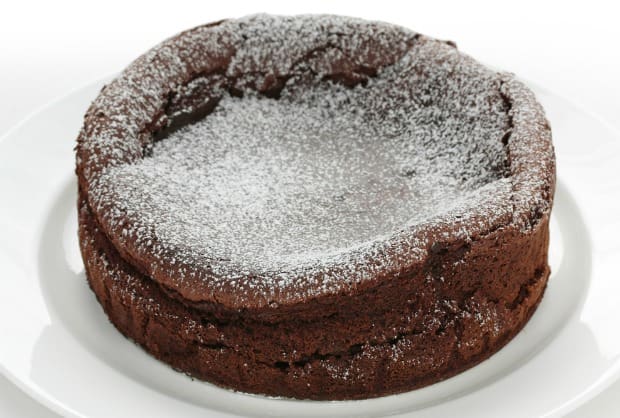 Traveling to Hong Kong soon, and apparently they don’t have much in the way of Ariadna there. Figured I’d bring my French to a) play them again and b) rep Ariadna in a foreign meta where they’re under-represented. Nate helped me dust off my French to see how bad the rust is… turns out it’s bad. Things started off great, like a nice looking souffle, and then I just fell flat on my face once I went into the hostile oven environment that is Nate across the table. There’s always some amount of things to take away, so I’ll go over what I think the major mistakes were–as well as some of the better things that I did.

I won the rolloff and decided I wanted to go second, which is so important for Acquisition, so I took deployment. Nate set up his Perseus link on the left, screened by a Heckler KHD.  He put down a Grenzer ML Haris on the right to make things difficult for me, and then screened them with a Heckler BSG and a Puppeteer, with everything covered by a warcor on his back table edge.

I saw some vulnerabilities, so I did my best to exploit them. The Grenzer Spitfire in the Perseus link was left out, and within 8″ of the centerline, so I put a Chasseur’s mine there with the actual Chasseur nearby. I covered the approach to the left objective with the other Chasseur Minelayer and their mine, and then put the FOs on either side, hoping to get some work out of them.

My Briscards clustered up near the central objective, with the HRL watching Perseus and one of the Securitate. The FO Briscard was on the ground level, and the Paramedic was inside the second floor of the Comanche Barracks, where we put the objective. I wasn’t sure where to put the one Loup Garou, so I just stuck him on the Perseus side because viral is good against NWI. I thought that Nate would probably move his Grenzer Haris to fix his deployment issues, so I elected to bring on my parachutist behind them after that happened. Nate dropped his Kriza to backstop his Securitate link, and then I plunked Knauf on a roof go after anything that Nate left out at the bottom of 1.

One other irritating thing is that there really isn’t a good place to put your HVT in this scenario. 4″ out of your deployment zone is basically on the centerline, so anything controlling any of the objectives is likely to just secure your HVT. I decided to go all in on the central objective, given my Briscards’ position, but Nate played it smarter and put his HVT on the board edge. I think there are a few options here, and most are valid, but you have to be aware of the tradeoff.

I felt like I had set up a flimsy ARO net to stall out Nate’s Tunguska as he advanced, but it was pretty fragile. Chasseurs are strongest when you can force interactions within ZoC, but I wasn’t really thinking about it. Metros are NOT the strongest ARO threat either, and I didn’t want to risk Knauf against the Grenzer ML or the Kriza. So really, I was looking at exploiting some relatively minor deployment mistakes with Nate’s Grenzers. With everything on the table, my delicate deployment “souffle” went into the oven…

Nate started things off by breaking his link and declaring a coordinated order to attempt to discover my mine covering the Grenzer Spitfire. My infiltrated Metro (not with the DEP) can see this, but I don’t want to give the Kriza a shot on him. 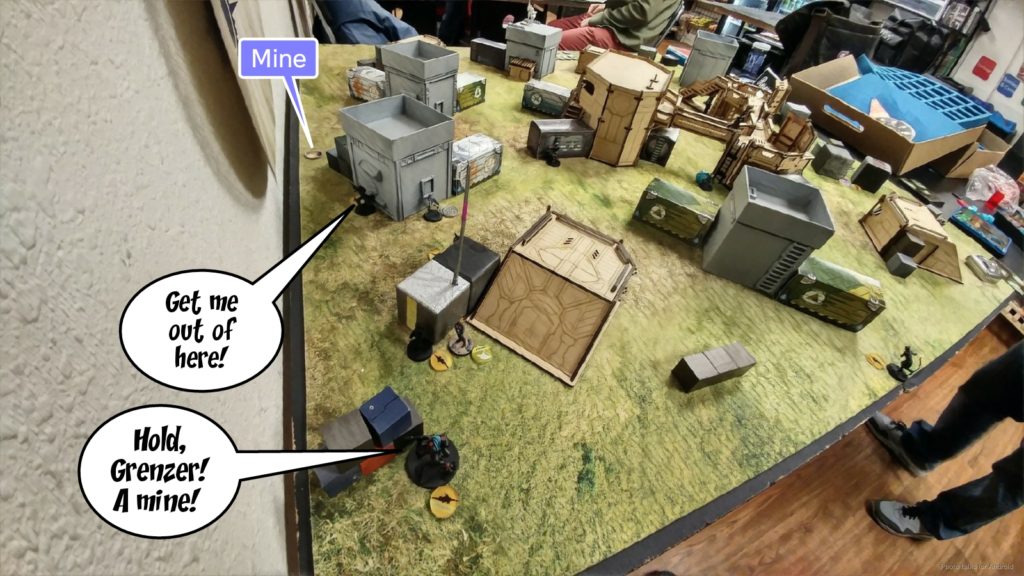 The mine gets discovered and gunned down with the Kriza’s lieutenant order. So far, so good! I’ve cost Nate two command tokens, an order, and a lieutenant reveal for the cost of deploying a camo token.  Nate actually used his Heckler KHD to discover the mine too, so now that the jig’s up he decides to use it. He actually uses it to throw a FastPanda, which is not part of its kit, to set up for White Noise. While illegal, this isn’t a huge deal because there’s a Securitate repeater nearby and Nate could’ve used some of the link members to attack me instead. 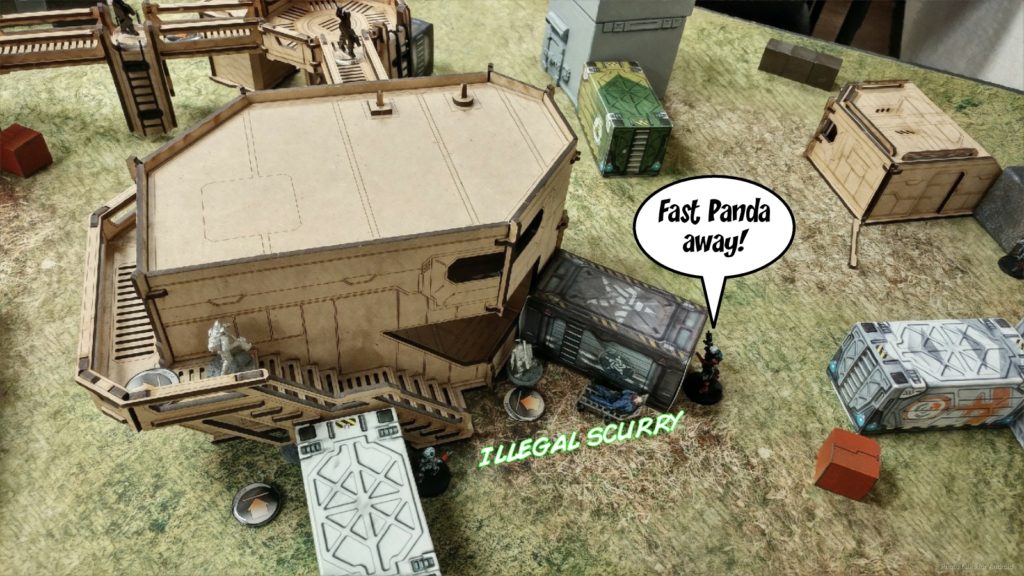 This does mean that Nate has to activate the Interventor to throw up White Noise, and it’s at this point that he discovers that his Grenzer is under threat from my Metro. He gambles and elects to chance that I’ll miss, and I do, revealing my Metro and wasting my DEP on the Grenzer ML, who was just within 16″. Literally 50-50 odds, as after cover and range I was looking for 10’s. I think this was a worthwhile reveal. 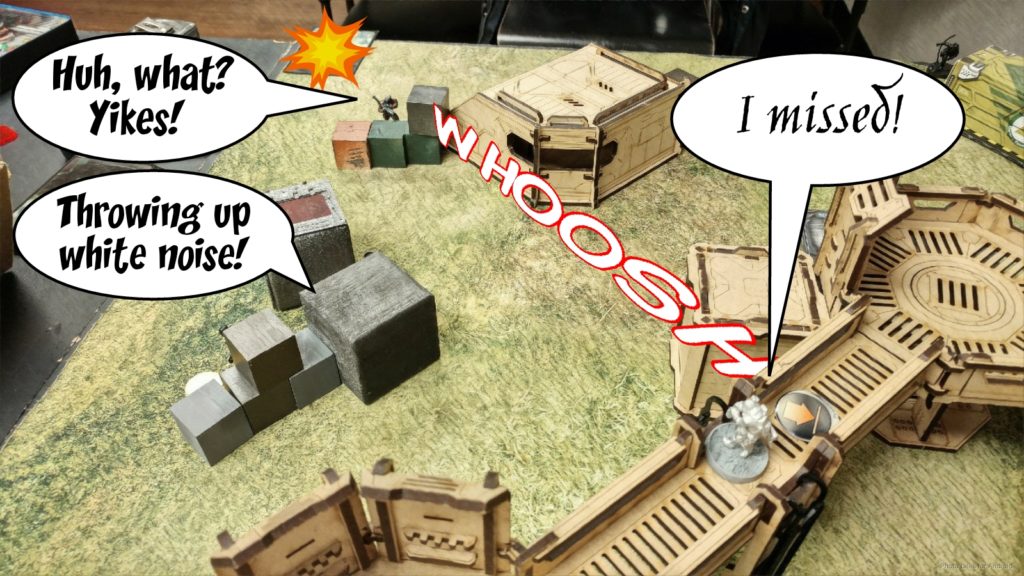 Anyway, now that there’s White Noise up covering my Briscard HRL, Nate spends a command token to reform the link (one of the two I mentioned earlier). Perseus scoots forward and takes out my Briscard HRL, who fails to dodge. The Heckler tries to take out my Zouave, who assault pistols back. I take a hit, tank it, and scoot the Zouave into cover.

Nate doesn’t want to leave my Metro alive, expended DEP or not, and reveals a second Heckler, this time a BSG Heckler, and tries to take out the Metro. Thankfully I crit on my dodge and scoot to safety.

With my souffle starting to fall, Nate starts stomping around the kitchen, trying to shake himself out of the ARO net I’ve woven. He manages to discover my Chasseur Minelayer who laid that troublesome mine in the first place, and then guns the Chasseur down with his Grenzer Spitfire. 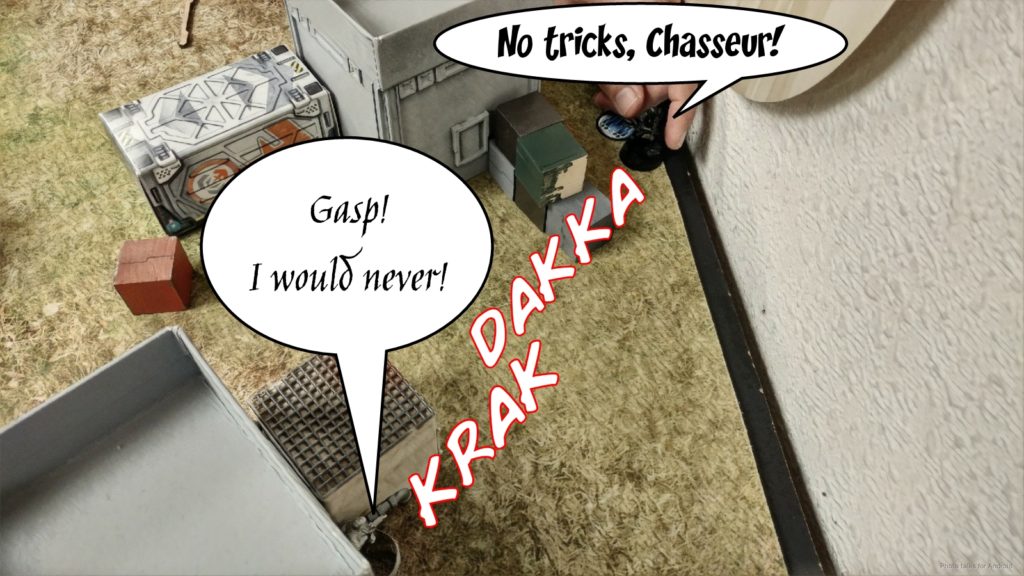 After attempting and failing to drop the Multiscanner with the Xenotech, synced to the Puppeteer, Nate is down to one order in his first combat group. He uses it to hide the Kriza from Knauf and discovers the remaining infiltrated Metro. I sadly neglected to take a shot at one of the Securitates while the Grenzer was going after my Chasseur… I definitely would’ve lost the Metro though… so maybe that was not the best idea? I dunno. I could’ve also shot the Heckler KHD in the back as it was wandering around. 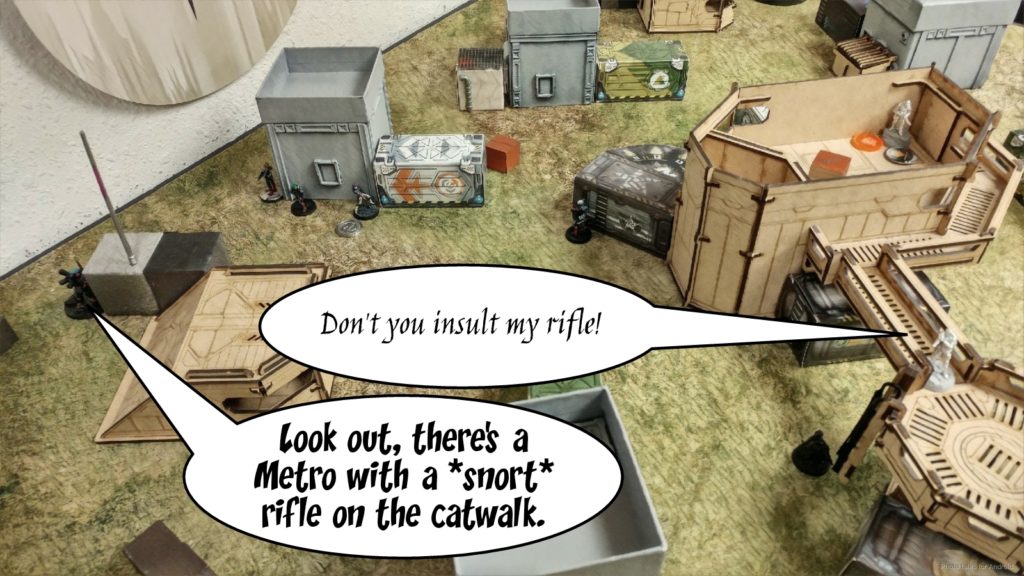 Not really sure what the best time to reveal was. Definitely need to practice more with the infiltrating Metros.

In any case, I try to do too much with my turn, and move all my Chasseurs at once. For some reason, I decide that it’s a good idea to go for my classified. I had draw whichever hard mode classified that makes you succeed on two FO rolls against both HVTs, meaning you have to succeed on four rolls whose targets might be split on opposite sides of the board. In any case, I succeed at my classified after the obnoxious cost of three orders. I’ve got a couple of options here:

What I really want to do is get some mines on Perseus and force either a null ARO or a dodge. The best way I have of doing that is to kill the Heckler, who is screening the approach to an adequate minelaying position on Perseus, drop the mine with the Chasseur, then trigger an ARO with the Metro or Chasseur. Or both. In any case, I instead choose to do the worst possible things. I drop a mine cover the Heckler, who can’t get an ARO to my Metro anyway, and shoot the Heckler in the back.

Of course, Perseus and friends gun down my poor Metro, I drop one more mine, push the right button, and then I’m stuck with one order left in the first pool.  I’m not sure what to do now, and I elect to throw all my Chasseurs back into camo, after they had either been discovered or helped me get my classified. I’ve got a few orders left in my second pool, so I attempt to take out the Grenzer with my DEP Metro. It doesn’t go well even though it’s reasonably even odds, and I lose my other infiltrating Metro.

With my remaining two orders I at least manage to drop the Multiscanner and pass the turn. I wish I had given up on the classified objective and been more aggressive on taking out the screening Heckler, which would’ve let me go after the link with mines and face to face rolls. Even if I was committed to getting the objective, I could’ve gone after that on subsequent turns. Furthermore, I could’ve used either of my two Paramedics to help me pick up my downed Briscard HRL. Just a gross misappropriation of orders and an awful mis-prioritization of objectives. Definitely lost sight of the important parts of the mission, and didn’t follow my own advice about keeping a mental checklist in mind.

In any case, the souffle started to fall. Nate sacrifices his warcor to detonate the mines. At least it takes out the Heckler’s unconscious body as well. 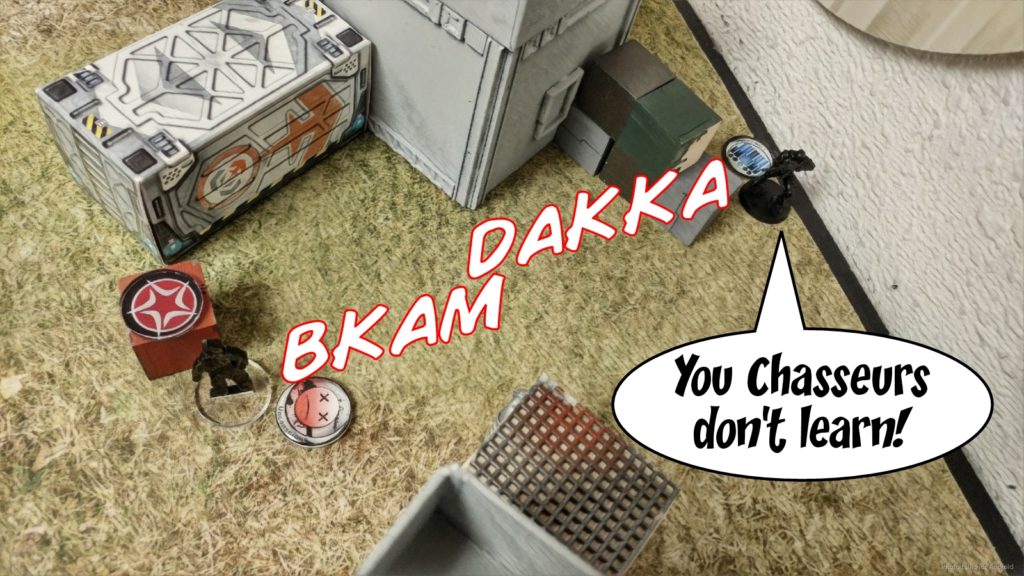 then Perseus just kills everything, as he is meant to do. I lose the Zoauve, who cheekily tries to DEP Perseus…

then Perseus somehow magically gets burst 5 and throws three dice at Knauf and two at my Loup Garou. Ah well. Mistakes were made! 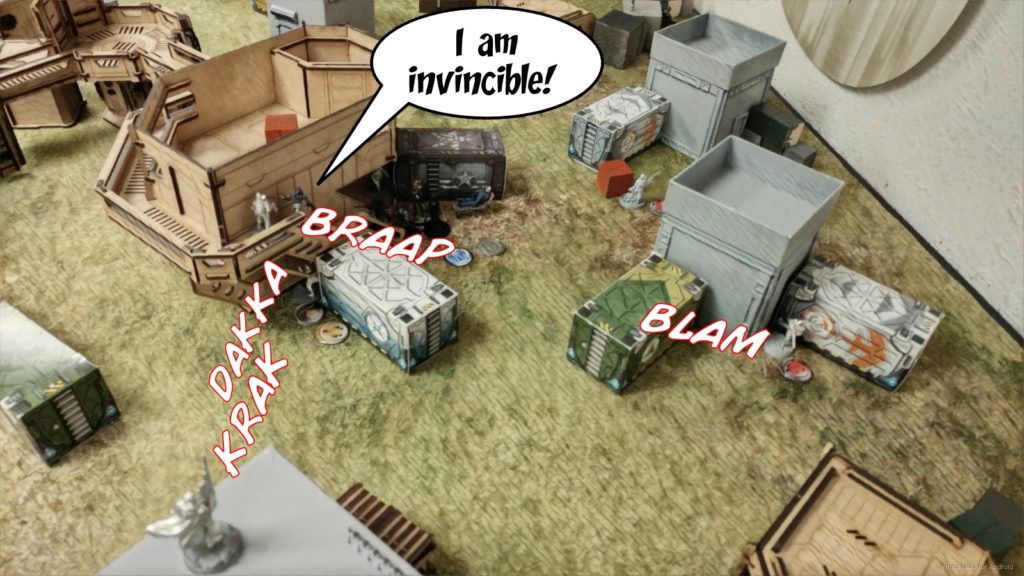 Nate doesn’t have enough orders to get into the building, so he just shanks my Briscard HRL to clear the way for the next turn…

and retreats to relative safety. 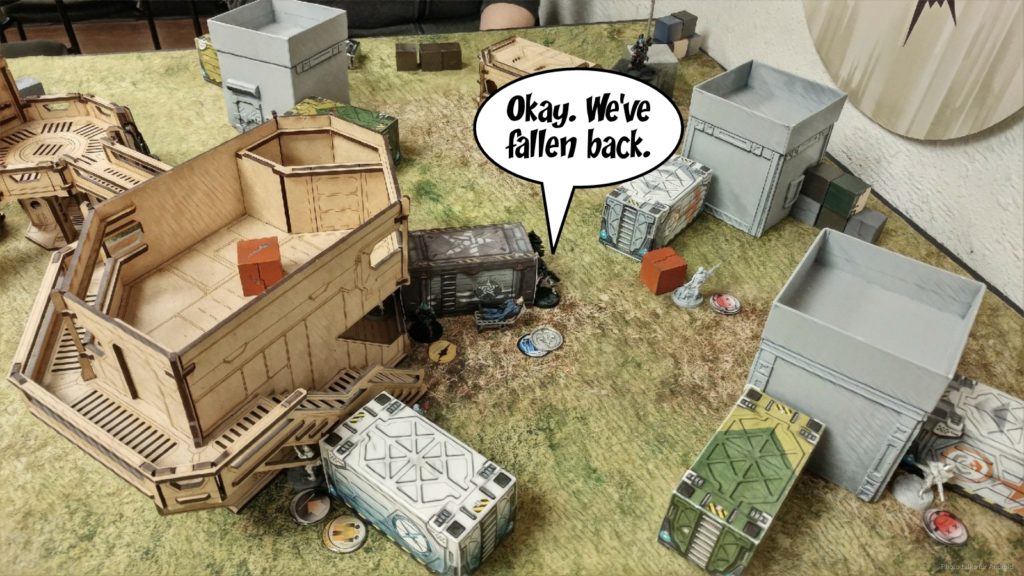 I throw all my troops into the same order pool, and I’ve got 6 orders. I use my Lieutenant order to take out the Fast Panda, and then start to get the Briscard into position.

Sadly, I ask where the the Securitate repeater is, and then promptly forget. As I inch the Briscard Paramedic forwards, as the Briscard FO trys to get an angle, White Noise goes down. UGH. I throw the rest of my orders into trying to take out the link with my poor Metro Lieutenant. I manage to down one of the Securitate and put a wound on Perseus, but Perseus’s superior stats win out and my Metro gets knocked out.

I put up a bit of a fight, taking out the Grenzer Spitfire with a great roll from my Briscard, but it’s just delaying the inevitable. 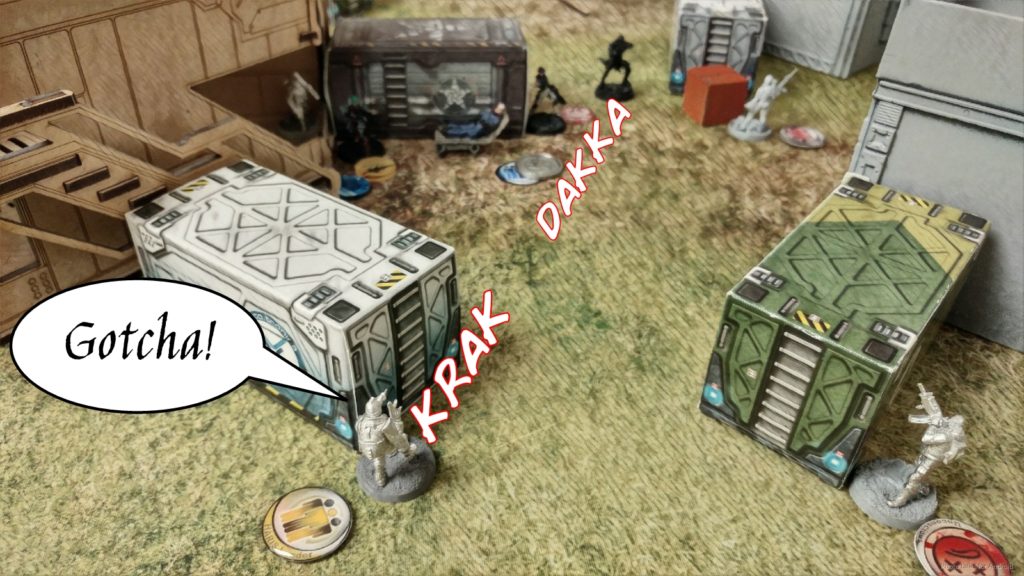 Perseus takes out the Briscard FO…

then breaches the central room.

At this point, I’m in retreat, so we call it. Not even a liberal dusting of icing sugar could save my souffle. 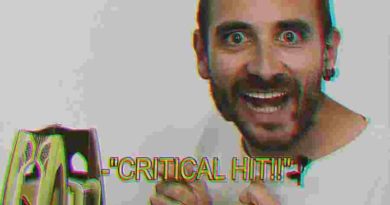 Ariadna is a Critical Hit!