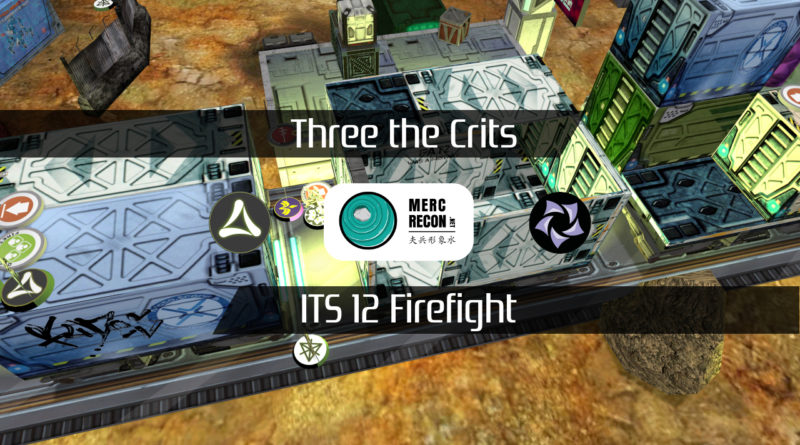 Finally, army hopping for the show is over! Still, for the second to last Late Night Wargames of 2020, Adam (TheDiceAbide), Clint (psuedonymmster), and I are going to talk about Tabletop Simulator (TTS). Clint’s an old hand at TTS, I’m relatively new, and Adam has never played a game on TTS at all. We figured that between the three of us we’d have a pretty decent representative sample of varying experience and comfort levels with the format. I chose a relatively simple map to make sure we weren’t fighting the map in addition to the interface.

I decided to keep playing Tohaa after my embarrassing last game with them:

Adam wanted to play Firefight, which is not a mission I have a ton of experience with or, frankly, desire to play. Firefight is interesting–it has three classifieds but also points for killing specialists. I decided to try and have my cake and eat it too by coming up with non-specialist ways of getting classifieds. I think using the fart cannon on the Kriigel would let me target things, so that covers some classifieds, and then I had some Medium Infantry stuff to cover those classifieds along with Sensor on the Chaksa if it really came down to it.

I had a lot of trouble selecting a Lieutenant, but eventually decided that Neema would be a reasonable choice given her three wounds, high BTS, and decent close combat skills. I figured it would be pretty tough to kill her and get those points. To further protect her, I added a Kriigel and a Makaul. To protect everyone and provide orders, 24 points of Kaauri SMG. What’s not to like? I wanted some more teeth in the list, so I added a Rasail and the Diplomat to round out group 1.

Group two had a Sukeul HMG, Kaeltar for the Symbiobeasts, and another Makaul. I threw in a Chaksa and Liberto for some cheap template weapons, and then I added some off-table troops in the form of a Clipsos FO and Gao-Tarsos. I figured the Clipsos would be basically the only actual specialist I had to deny Adam the points for killing specialists, and I’d be able to keep it very safe by not having it on the table at all until I needed it.

Adam went with a similar plan, albeit a slightly riskier one. His Lieutenant was his only specialist, making it an easy two-for-one special for me. He took Oktavia to be an active turn attack piece and a scary ARO. The rest of his stuff is pretty standard vanilla Combined: Caliban Spitfire, the Combined Army starter pack (2x Imetron, 2x Ikadron), Q-drone HMG, Speculo.

Some spicy choices in the form of a Malignos and the Zerat minelayer, and then a Gaki to act as a missile. If you’re interested in following along, here’s the Twitch stream. Apologies if we’re not that entertaining, it was late and we were both kinda tired.

Adam won the rolloff and decided to go first. He spent a command token for a second reserve model, and then put down a pair of Ikadrons to defend his backfield. The Q-Drone covered a firing lane deep into my deployment zone, and then he stuck his Imetrons in a back corner where he thought they were safe.

The Malignos went on his left in the train cars, and then Adam threatened everything with a Gaki. Nourkias and the Caliban anchored his center. I tucked Neema into safety behind some boxes and gave her a SymbioBomb to deter any Rasyats from coming by. To protect her, I bubble-wrapped her with two Kaauri, a Kriigel, and a Makaul. The Chaksa watched another deployment zone edge with the last Kauuri watching the left corner of my DZ.

The Sukeul HMG Triad went on my right, with the Makaul watching the Gaki, ready to contender it off the table as it came racing forward. I stuck the Diplomat in a spot between two train cars to further discourage things from coming in on that side. The left was covered by my Libertos, and I stuck the Clipsos all the way on the right to get an easy advancement path to getting classifieds.

Adam put down a Speculo out of reserve to threaten my poor Diplomat (rude!) and then covered my Sukeul with Octavia. Gross. I responded by anchoring my left with a Rasail and its Chaska, with the Rasail in a position to take out the Zerat and Oktavia if it came down to it.

My Makaul was watching the Gaki, so Adam didn’t use its impetuous order, instead hyper-focusing on the Diplomat. He threw the Speculo under the bus and traded it for a Makaul and the Diplomat. I felt a little foolish for dodging the Makaul into view only to have it double templated by the shotgun, but I decided to double-flamethrower the Speculo and just get rid of it.

The Diplomat was pasted, but the Makaul and Speculo passed enough saves to merely be unconscious. I did succeed on my Eraser, meaning that the Speculo was also isolated, for what it’s worth. Little did I realize that this was all an elaborate plan to land Ko Dali in the gap between train cars next to the downed Speculo and Makaul, whom she promptly ate to gain a wound. Apparently you can gain more wounds than something has to lose, which I thought was stupid, so Adam graciously agreed to only gain a single wound.

Adam then swung Ko Dali out to burst the Sukeul’s SymbioMate off with her assault pistols and then fired ze missiles at the Sukeul with Oktavia until it was unconscious.

Adam’s final gambit was to try and get a Gaki to explode on my Kriigel and Kaauri. He dove one in, hoping to survive a pair of contender shots and then explode, but I denied him that by landing two hits.

Adam threw Nourkias into Cybermask and with that, it was over to me.

I pushed a bunch of stuff into the first combat group, and then asked Adam if I could walk my Kriigel out to deal with Ko Dali. Unfortunately, Oktavia was watching, so I had to deal with her first. I pushed the Rasail forward and managed to do a wound to Oktavia. That dogged is pretty relevant in the reactive turn!

I pushed forward again and finally took Oktavia out with another burst of Spitfire rounds. Adam’s Malignos continued to fire at me ineffectively from outside 32″, and the Rasail even managed to tank the Zerat’s mine, clearing it!

I decided that I should attack Adam’s order pool directly, especially since he left a bunch of stuff in the open. I’d leave myself open to getting attacked by Ko Dali, but at least he’d be working with less orders. I also felt pretty good about the state of affairs with all the direct templates, Eraser, and Neema with a ‘bomb in that area. So, I dropped in my Gao-Tarsos Spitfire and went to work. One order dropped both Imetrons…

then I came around the corner to see both the Ikadron’s butt and Nourkias’s IMP-2 token. Adam decided to not reveal Nourikas so I discovered him and started blasting away.

I finally managed to drop Nourkias on my last regular order, then I attempted to take out the Zerat with my Libertos and failed.

Adam spent three command tokens and four orders on Ko Dali trading fire with my Kaauris and Makaul. In this exchange we both crit twice on the same order, meaning Adam was unable to take out my Kaauri and advance forward, instead hiding Ko Dali behind the train after taking a wound from my Kaauri on the box.

After shuffling his Q-Drone into a position to cover my Gao-Tarsos, he passed turn back to me.

I ran the Kriigel out and successfully Erasered Ko Dali, then moved Neema in to endgame her before tucking the two of them into position to anchor my right flank now that the Triad there was dead. Apparently Erasering first might cause mod stacking for Isolated, making it -12 WIP to reset against Endgame from a SymbioBomb, which is pretty brutal. I won the roll the normal way, this was just something we were discussing post-game. It doesn’t seem there’s a ruling on how the mod stacking actually works yet.

I wiped out the Ikadron that was next to Nourkias while moving my Rasail’s Chaksa up, then retreated the Gao Tarsos into total cover, away from the Q-Drone. We exchanged some fire, and the Gao Tarsos managed to crit the Q-Drone which passed its saves. I just wanted to retain the threat of the Spitfire, and figured it would be pretty likely that I would survive due to my two effective wounds.

My Libertos acted next, gunning down the Zerat finally with its chain colt and bouncing a heavy-pistol round that came back.

It had taken a few orders to handle Ko Dali so I settled in for Adam’s third turn.

Neema dragged the Kriigel forward and got Net Undermine, securing Adam’s HVT with the Kriigel. I then revealed the Clipsos and got Mapping by dashing it up the empty right side of the table. Since Adam’s Caliban was securing my HVT, it had to go. My Rasail whiffed 4 shots but my Chaksa planted a pistol shot right on the money and dropped the Caliban.

I’ve killed more lieutenants, specialists, and stuff in general, and I’ve got all 3 classifieds. Adam’s got the panoplies, making it a

That fact that there is loss of lieutenant in this mission is a pretty big deal. We also forgot until the last minute about HVT deployment and Localized Decompression–typical of our games. I think I took a pretty big gamble on trying to take out Nourkias instead of taking out Ko Dali, but I think taking away Adam’s command tokens and four orders is a pretty decent alternative.

I’m much happier with the way I played this game than my last one. I remembered my tools, used them when appropriate, and took the right amount of risk. I think the big discussion point is my first turn. I had a few options:

All of those are pretty decent options. I think the best ones lead with the Rasail killing Oktavia, as that removes an order, an ARO, and an attack piece. It also lets me advance my Chaksa and clear a mine for the Libertos to threaten the Zerat. From there it’s really a decision of whether or not I go after Nourkias with the Gao Tarsos or go after Ko Dali. I decided that I should play to the mission and that the Clipsos would let me get at least two classifieds: Mapping and Secure the HVT.

Going after Adam’s one specialist and Lieuteant put the most points on the board. I was also pretty comfortable with ability to fight Ko Dali for a bit and stall her out with all the pieces I had there protecting my Lieutenant. All I’d need to do is Eraser her and then the bleeding would stop. As it turned out, I did quite well and lost a few non-essential pieces. Obi (nehemiah) had suggested I put them Kaauri into suppression, which I had been planning on doing until Nourkias survived a round of a Spitfire shooting at him in the open. So all in all I’ll take my two orders of crits versus Adam’s two orders of crits. That definitely made the game unwinnable for Adam, but I don’t think it would’ve been significantly better had I lost those models he was shooting at.

All in all a good game, and a good intro to TTS for Adam! 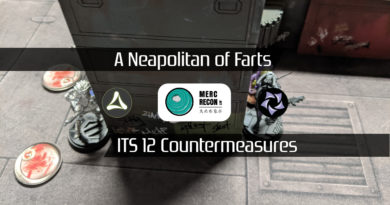 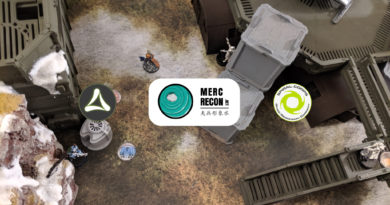 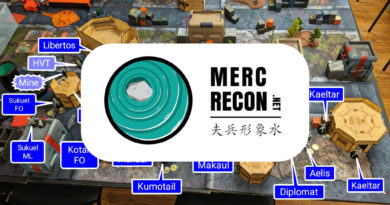 One thought on “Three the Crits”