Well, I did it. Over a year after I moved across the country, I “finished” my first two miniatures in my new home, aka I got tired of trying to fix super tiny things that you wouldn’t notice in a game. Glamour shots taken on my phone of the old Algaucil MSR sculpt below!

After deciding she was table top ready, I threw some weathering powder on after the last of the highlights, and then matte varnished her. I’m reasonably pleased with how the eyes came out–they’re my first outing with Copic pen line (I used the 0.3 one in black), and good gravy do they make pupils easier. Not perfect, lots of room for improvement, but my eye work flow is just so much better.  Before the black paint would dry on the brush before I got it to the model, even with drying retarder. 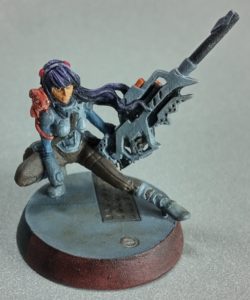 It’s a fun model! She’s got a crazy pose going on, and the MULTI Sniper Rifle is just… giant in comparison to her body. It’ll be nice to be able to take two Algaucil MSRs in a 5 man defensive link and have the models to represent them. I think the purple hair turned out okay, but it looks much better in person than on camera. All the camera seems to do is draw attention to the grainy texture of the Army Painter rattle can primer.  My friend rightly called her a muppet from all the fuzziness.

I did try a technique new to me, which is often called the “gemstone” technique.  It was pretty damned easy. You can see it on the thingy… flashlight? on her gun there in the right of frame. I question the utility of a flashlight on a long gun like that, but hey, maybe she has to do CQB with it and wants to just strobe her target and hit it with DA ammo, or maybe it’s so bright (that lens is huge in comparison to the barrel diameter) that it’s the MULTI Sniper Rifle’s stun ammo?  Who knows.

Here’s the super condensed version of how to paint gemstones.

Obviously I have a great deal of improvement ahead of me, but I’m very pleased with the results for my first outing doing the gemstone technique.  In general, some takeaways from this exercise:

I’ve got a huge queue of models after the Algaucil.  Next up was the Alguacil Hacker from the Corregidor starter box. She’s a holdover from before the move, and this is what she looked like when I pulled her out of my carrying case:

Yeesh. I think I was really rushing to get her base coated so I could put her on the table and not be really upset with myself for having a ton of unpainted minis. It takes so much time to tidy up the color transition areas. Lots of paint thinning, lots of paint drying on the brush while you move it to the model, lots of squinting, lots of sighing, and lots of beer.

Here’s the same model after a few hours of correcting my earlier laziness. There’s still some work to be done on the boots and in the neck region (why did I have to make her blonde!? Have to be so careful now.), but there’s way less white primer peeking through. I’m almost ready to start lining the creases and main shadow areas with wash, then highlighting, and then it’ll be time for the eyes and the face. You can see my dowel + poster tack model holding contraption in the frame, which I definitely recommend to everyone.  I really like the model, she’s got a great pose which just exudes sassiness, and the drop holster webbing breaks up the lines of her legs very nicely. I think that my choice of olive drab on brown makes sense on a tacticool level, but doesn’t pop quite so much. I’m stuck with it now though for my Corregidor, and I guess by extension, most of my Nomads. After the face, it’ll be time to hit the hacking… visor… helmet… thing… with some lighting effects. I’ll go with orange, like I did on my Hellcats and Wildcats.

Aaaand we’re done. Sloppy orange glow, but I have such a stupidly huge pile of models to paint that this will have to be “good enough.” I’m really regretting the Army Painter primer now. All of my non-airbrush-primed models look like muppets. Or maybe I’m just awful at painting. Who knows. Mr. Gecko Mk12 is coming along. For a long time, I was making myself miserable by mapping color choice to likely material composition, i.e. midtone grey for plastics and dark grey for ceramic (or whatever it is they’re using in Infinity) armor. I gave up and started just coloring things what look cool while trying to stay in a color scheme.

There’s just so much detail on Infinity models that it sorta mandates that you have some color change between regions, bits of stuff hanging off models, etc. to really bring out all the hard work of the sculptors (I say, like I know what I’m talking about…).  Reaper’s Nightshade Purple gives a really nice off-black to pick stuff out and provide some contrast. Speaking of picking stuff out, I figured I’d give the Daktari some Two-by-Two Hands of Blue gloves, ’cause she’s a doctor and such.

I’ve been waffling hard on my color schemes for Bakunin, but I think I’ve settled on purple for things like Zeros and Moderators, stuff that is “official military” or whatever. The religious units will be different, and the other crazy nonsense in Bakunin will just be whatever the hell looks best, I guess. Purple Taskmaster sounds fun…

I really dig this Authorized Bounty Hunter model. The pose is super sweet. Now to pick a glow color for the helmet optics…

Hull red for the coat, looks pretty okay. Need to futz with the camera situation, but any time I do that I’m not painting…

Speaking of other projects, I (with help) figured out a great way to make my Dystopian Wars minis pop! The only significant change to the models was that I highlighted the edges in pure white. It makes a huge difference!

It just looks so natural. Here’s a slightly better lit version, with a worse background:

And with that, I’ll leave you with this business:

The Zero hacker comes as one piece except for his outstretched hand. I couldn’t stop chuckling at this scene on my drying mat after they both got a ultrasonic Simple Green bath…

Hopefully it won’t be forever before another hobby progress update!