Nothing quite like regular game nights, a tournament, and a supportive significant other to motivate you to make some hobby progress! First and foremost, my better half has upgraded my paint station with some organization for all my stuff!

For those interested, this is what she got me:

Most of the dropper bottles are Reaper with a smattering of Vallejo and Army Painter. I actually like the Army Painter washes, so all of my washes are theirs. I use Vallejo airbrush primer. The larger bottles in the 6 Tier racks are a complete set of Minitaire paints, which I got for a song when they were something like 40% off.

Speaking of airbrush stuff, I upgraded my Badger Patriot 105 with a High Roller trigger, which is far more comfortable and easy for me to use. I like the stepped ridges on the trigger instead of the dimpled trigger, which is just hard to hold onto. If you’ve got larger hands or want more control, I definitely recommend replacing the basic trigger on whatever airbrush you have.

This has been a pretty good two months in terms of progress. I’ve put together a Mobile Brigada pain train, actually mounted a bunch of stuff on bases, and started painting my backlog, including stuff that migrated with me. I’ve now got all four Hellcat sculpts, which is most pleasing to me. I especially like the pose of the Hellcat BSG. I left the little nubbin on the bottom of the foot attached, and filed it down to a spike, which I then inserted into a hole I drilled in the resin bases I’ve been using.

Yes, that is a Securitate in the picture below, along with a Boarding Shotgun, the combi Hellcat, and a combi/pitcher Custodier.

No Corregidor force is complete without Hellcats and HMGs, and here’s a Mobile Brigada HMG, a Hellcat, and the infamous Intruder HMG on my assembly station.

I’ve switched to a gel-type CA glue now, which I really like. I tend to waste a lot of it, as it just drips while open as I’m holding stuff together while it sets, but I haven’t figured out a smarter methodology yet. I think I need to raid the pantry and get some Q-tips to have on hand to clean up excess CA glue. The glue itself is quite nice, but it’s not terribly easy to apply using this tube thing. It doesn’t seem to take up much moisture, which means it actually bonds properly and quickly, unlike the dropper bottle CAs I’ve used before. 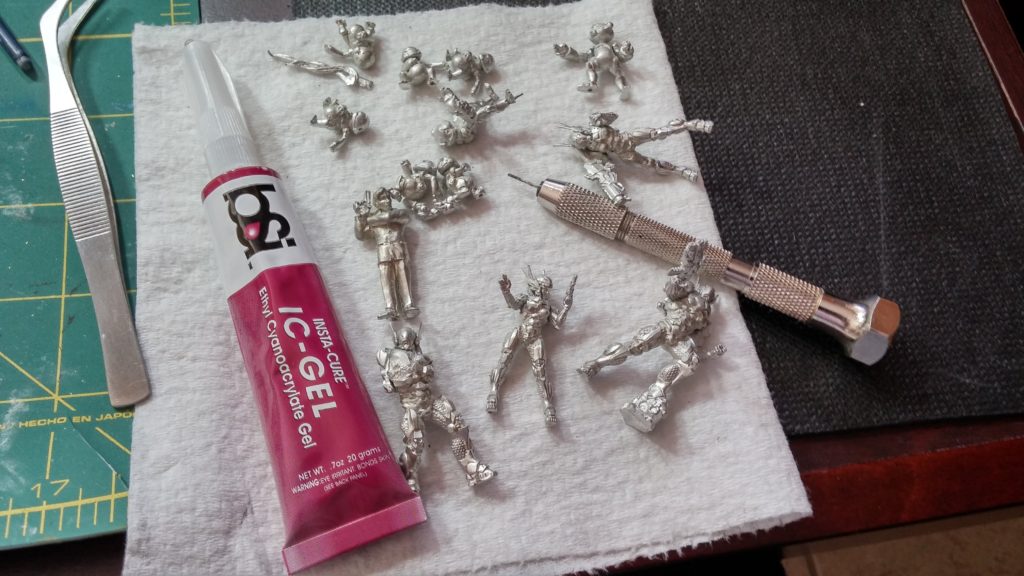 I did mess up assembling the Mobile Brigada though, I swapped the hacker and missile launcher heads, but oh well. I think they look great, and the poses will be a little non-standard. The Pain Train is leaving the station!

I actually tried out a 3-man Mobile Brigada core recently, was was reasonably pleased with the results. I’ve got a Wildcat HRL blister waiting for assembly too. The night before the June Doom Tournament, I was assembling, priming, and basecoating till late, just so I wouldn’t be playing with bare metal.

I haven’t had much time since the tournament to sit down and get some painting done, but I’ve been experimenting with orange as my LoF arc marks for my Bakunin. 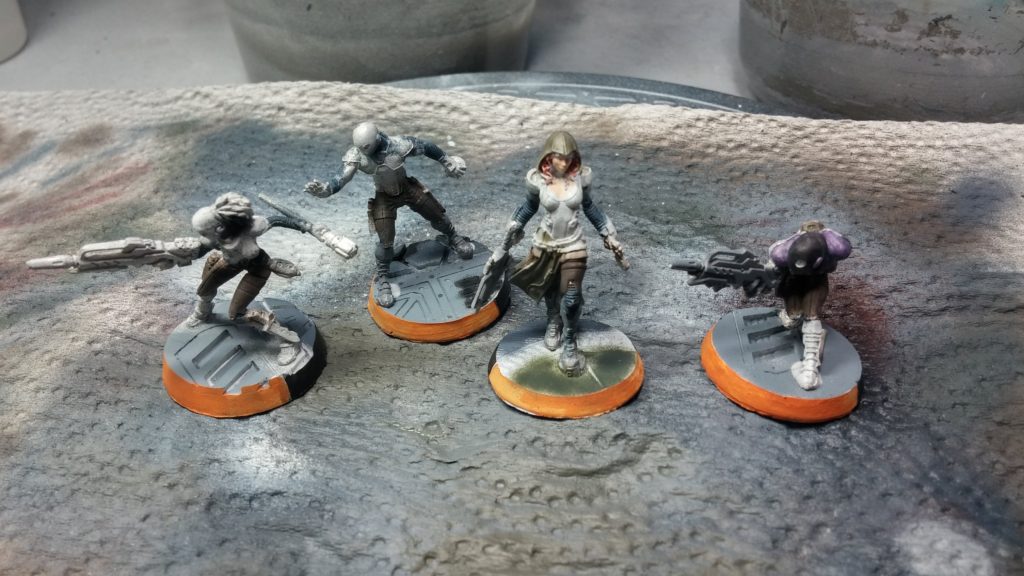 I’m trying to make each Nomad sectorial have it’s own color scheme, with things like the Space Nuns having their own sub-color scheme. To tie all the sectorials together, I’m choosing glow effect colors and LoF arc colors from the same set of colors.

Hopefully this doesn’t look terrible on the table when mashed together, but I’ve been happy thus far. Oh! I also found a cheap line laser at the local discount hardware store, for a few bucks cheaper a laser from a popular gaming brand. Required some filing to get the magnetic mount off, but that was trivial.