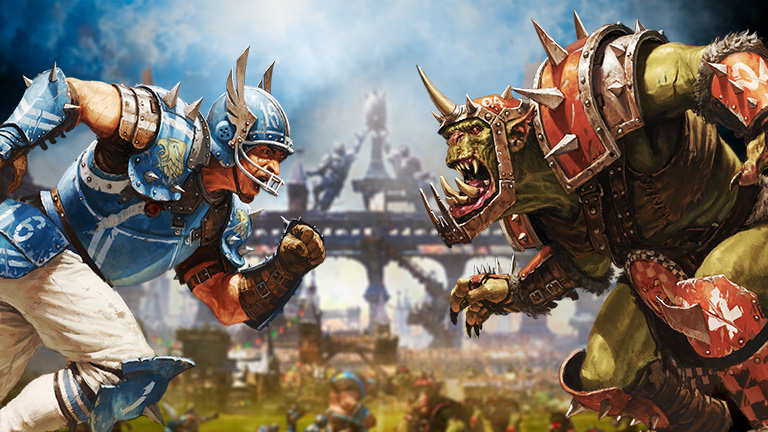 So, Adam and I have started having a game night where we don’t play Infinity. He’s been going on and on about how awesome Blood Bowl is, and I’ve always promised to play it with him if the opportunity arose. I did so mostly because he’s really excited about the game, I like hanging out with him, and he never gets to play it.

So when he cashed in the promise, I showed up to game night with the expectation that he’d do a good job of explaining the rules to this silly sportsball game (ugh sportsball), I’d have a decently fun time, and then we’d put it away until his Blood Bowl itch resurfaced. Boy, was I wrong.

Adam set me up with the Ork team versus his Humans and explained that if I remembered only one thing, it was to advance my turn counter before I did anything. If you don’t, the other guy gets to figuratively sucker punch you by smugly saying “Illegal Procedure!” and ending your turn!

Update: Apparently Adam lied to me and illegal procedure just makes you lose a reroll or something… Typical Adam!

The other thing that Adam explained was that the dice are there to make you sad. With few exceptions, if you fail a die roll, your turn is over, even if you’ve only activated a single model! There’s a bit of social Darwinism to this game, he further elaborated. Basically, if you’re going to get salty about the dice in this game, or really anything in this game, you’re going to quit, almost immediately. That was fine by me! I’ve got plenty of gamer salt in my veins, no need to add more! With the big concepts out of the way, we got on with our first game: Orks versus Humans!

Adam was kind enough to set things up for me in a “normal” deployment. I had no idea what to do, so he just lined everyone up on the center line in some sort of fancy sportsball straw-tee-ger-y pattern and we got going. I had first turn, so after advancing my turn marker while Adam looked on smugly, I was at a bit of a loss for what to do.

Always helpful, Adam explained that we were basically playing sportsball. We had just kicked the ball from my team to his, so his human sportnauts had the ball. It was my job to prevent him from getting a home run, and if I could I’d want to steal the ball from him and get it to the goalzone to score my own home run!

“Okay, so how do I steal the ball from your manz,” I asked? “You’re playing Orks,” he said. “Murder the shit out of my team.” My ears perked up! This is the kind of sportsball game I can get behind! After he explained which of my Ork Boyz were the choppiest choppas, I got down to the business of pasting scrawny Hoomans.

A few turns and a few unconscious (and dead) Humans later, I had killed the Hooman with the ball and one of my boyz had scooped it up. I formed a Orky bulldozer and just mushed all those frail Hoomans out of the way while my speediest boy scooted his way to the goalzone!

When it came back around to my turn, Adam explained that while I could easily score my home run, I could totally just bash on Hoomans and try to kill them all. I just ran the risk of failing some die rolls and giving him another turn to try and sack my guy with the ball. This was too good to pass up, so I went for it (eh? eh?), punching two Hoomans into the dirt before my Ork spiked the ball in the goalzone! GOOOOOAAAAALLL!!!!

With so much puny Hooman face to punch, this whole thing had taken us most of the first half of our sportsball game. Adam informed me that it was no more Mr. Nice Human time, and that he would be playing at full strength in the second half!

He was right! The Hoomans were mad that we dunked their sportsball hoop or whatever the kids are calling it these days, so they entered the second half with something to prove. They even managed to knock down some of my boyz! Very upsetting.

In the end, my Boyz managed to grind the Hoomans to a halt, just smacking any Hooman that got the ball until he dropped it.

With one grand slam on the sportsball leaderboard, the Orks took it home 1-0! Huzzah! The crowd goes wild!

I had expressed some interest in trying out the Shambling Undead team, so our next game night Adam hooked me up. He also decided to play his Dark Elves team to give me an introduction to a completely different game, which he called “Elf Ball.” Alright, let’s do this!

After my Mummies punched a few Elves into the infirmary, I managed to assemble what the cool kids are calling a “cage,” and then started moving it up the pitch.

At some point Adam sent in his Witch Elf, which is some sort of extra smashy Elf to harrass my Ghoul sportsnaut. I introduced the pansy elf to some Mummy justice after boxing him in!

Some more Mummy face punching later, I was able to get my Ghoul into the 3-point line and score a field goal.

We set up again, and the Elves went to work.

They even managed to shove a Mummy over! Mummy down!

With only two turns left, the Elves somehow managed to dance and prance their way to my sportsball zone at the end of the pitch after throwing the ball. Who even does that!? They tried to Go For It and score, but the silly prancing Elf fell over and died. Serves them right for prancing about so much!

Second half, the Elves did some cheaty bullshit and scored. My Undead were displeased by this so I formed another cage, which the Elves didn’t like very much. I got it almost all the way to the end of the pitch…

but one particularly prancy Elf made it all the way in to try and punch my Ghoul! RUDE. That’s not good sportsnautship! Fortunately, Nuffle smiled on me and Adam rolled a skull, spent a reroll, and got a skull again! Bwahaha! Something something Dark Side Complete!

Next turn, I just walked in and scored! 2-1 Shambling Undead Victory!

Okay I love this game. Maybe it has to do with winning twice in a row, but it’s so FUN. I just love how it doesn’t take itself seriously. It has all the hilarious storytelling I could want out of a game. I mean, who doesn’t want to have the mental image of a Mummy decking an Elf in the face with a ham fist rattling around in their brain!?

I’m sure this is old news to all the long-term NAF members out there, but the rules are super tight. Tackle zones and assists are still a little confusing for me (a little more experience will sort me right out), but having Adam there to talk me through some of the more complicated interactions made things a breeze.

The game clicks for me and even more importantly it gives you feedback on what you did wrong. I’m not talking about the negative feedback on rolling dice–I learned immediately to never roll dice unless it was absolutely necessary and to do everything that didn’t require rolling first. What I mean is that if you do something suboptimal, the optimal alternative is right there in front of you, staring you in the face and taunting you.

There is a lot to learn still, but I don’t feel intimidated. I’m excited to just enjoy some good old fashioned beautiful models on a table fun. There’s SO many teams, special characters, third-party sculpts, and forms of content to explore that I think I’ll have my hands full for a long time. I just bought my own Shambling Undead team and hope to have them assembled soon!

In closing, it probably also isn’t a surprise that I’m not a sportsball fan, which is why I was pretty reluctant to play this game in the first place. I think that’s exactly what makes the game so fun for me. It was designed by a bunch of drunk Brits that had just watched a single American football game and thought they could do better. I have to say I agree! All Hail Nuffle!!11eleventy-one!!