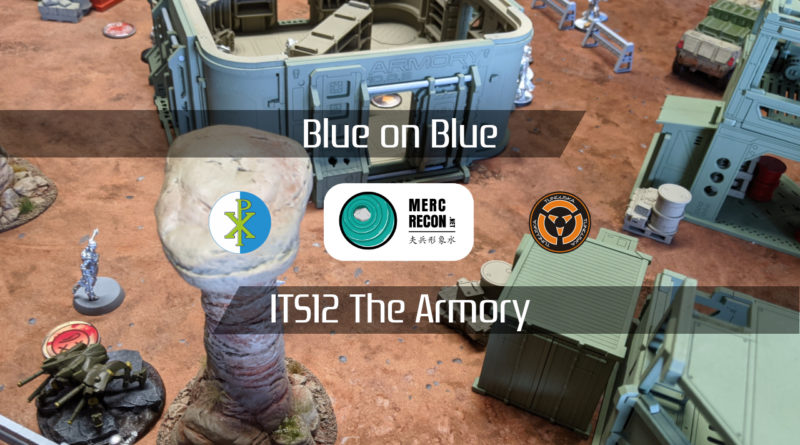 Well, if you have an opportunity to play Obadiah (nehemiah), you take it. Adam hosted our socially distanced game, and we settled in for some good old fashioned PanO versus Nomads action! If you missed it on Late Night Wargames, I recently bought Tim (Chainsaw)’s Acontecimento, so it was time to put them on the table. Specifically, this table:

…perhaps one day soon we’ll break out a different game mat and play on a different table, haha! Obi and I decided to play The Armory, thanks to that being featured in an upcoming episode of Late Night Wargames.

I just threw in a bunch of Acon stuff to give it a go. I’ve been really excited by all of the cool Regular profiles, especially the sapper sniper and the hacker profiles, so they went in there. I also wanted to take Naga, with the intent of throwing at least one over the center line to fit with the upcoming Bromad Academy mission as well as the discussion we had on Late Night Wargames about Infiltration:

The Akali is kind of a must, because they’re so cheap and good. Then I threw in Scylla, a Guarda, and a Peacemaker, to give me plenty of templates for the Armory that I don’t care about losing.

I figured I’d want some engineer support and also some Fugazi for orders, so they made it in there… and why not add a missile bot.

Obi took a Grenzer core with Perseus and an Interventor. He rounded out his list with a collection of Nomad stuff like Transductors, Lunokhod, etc. Mary was a nice addition to provide some more hacking coverage as well.

Grenzers are pretty great on their own, they don’t really need to be linked, so Obi left the Sniper and Missile Grenzer out of the link at start to give himself some flexibility. He’s done a great job doing some very subtle work on Grenzer conversions like this:

If you want to see him in motion, you can have a look at his Twitch show here:

Obi won the rolloff and decided to go first, which I thought was an interesting choice. It might work for something like Armory if you can hit hard enough and push to the other side of the armory building. He set up his Grenzer link with the ML nearby on his left, with his Transductors and Salyut hanging out across various places. His Puppetmaster hung out in some rocks, just to have Counterintelligence and a mine and the Lunokhod went in the middle. Mary went right behind the Armory, presumably with the intent of opening the door.

I set up my Fugazi to defend against Raoul, and then attempted a Naga MSR over the centerline roll. It failed, so I used it to cover Mary Problems. The Peacemaker and its Auxbot went on the right, with the Machinist and the Clipper on the left. The Clipper was denying one side of the truck to the Lunokhod, and just generally threatening parts of the table. I had some trouble deploying my Guarda and Scylla, so I just stuck them in places the ML couldn’t see and left them there. My Naga Monomine was my counter to Mary’s placement.

The Guarda was my reserve, and Obi put down his Grenzer sniper in a spot to kill my Naga MSR. Smart!

Well, Obi needs to unpin Mary, so one order’s worth of shooting from the Grenzer takes the Naga off the table. Boo.

Mary tries to open the armory door and fails.

Perseus, not willing to wait for anyone (the hubris!), sets up some smoke to block LoF to my Regular MSR and then advances the link towards the armory.

Mary keeps frantically working, failing another WIP roll before she just rips the control panel off the wall to get the door open.

As Perseus and one of the Grenzer FOs secure the Armory, with Perseus grabbing some Grenades from the Panoply, Obi sends the Grenzer Red Fury after my Clipper. We’re just outside of 24, but I roll a 1. Obi rolls a 2. I resist the urge to flip the table and put a unconscious token next to my Clipper.

The Grenzer attempts to sensor my Naga, but I just dodge out of LoF of the door to make it annoying to dig the Naga out.

Obi shifts some of his ‘bots forward, in particular the Lunokhod (and a Koala) into the doorway of the Armory, and settles his link into a defensive position before passing turn.

I bring on an Akali, and get to work.

The Puppetmaster goes down first…

and then two orders later the Interventor is down. Okay, things are going pretty well so far. Mary spotlights my Akali through the Transductor’s repeater, which makes it harder for me do stuff.

I try to take down the Grenzer sniper. Obi’s on 22s and crits twice, but I pass both ARM saves on the first order and also crit on my second order, burning out the entire second pool. This was a huge mistake. I should’ve been happy with just killing the Interventor and just going prone nearby, saving some orders to walk into the armory with the Naga.

I guess I was a little overconfident with the Guarda. I hop it off its perch and start walking forward. First I take down the Transductor on my left while blasting the Koala off the table. I then get the Guarda in position to see the Grenzer, blasting it off the table with some shotgun and multi-rifle fire. I had forgotten about the flamethrowers, but the Guarda passes both his saves. Phew!

I get myself into trouble by getting a little too close to the Lunokhod with the Guarda, letting Mary get a successful Oblivion off. I hit Persesus and the Lunokhod with a pair of shotgun templates and a burst of MULTI Rifle fire from the Guarda, taking down the Lunokhod. Perseus’s hubris is well founded though, and he passes all his saves after dodging the shotguns.

With the Guarda isolated, I have to do something else, so I push the Regular link forward and take down the Grenzer ML after untangling the Peacemaker’s bot, which was in the blast zone of the Grenzer’s missile. Moving the ‘bot lets Perseus throw smoke though…

so I spend my last order covering Perseus and the doorway on Obi’s side with the Peacemaker’s auxbot.

Obi’s in loss of lieutenant, and starts by trying to stun my Auxbot, but I pass both saves and fail guts out of LoF of the Transductor.

The Grenzer sniper takes down the Auxbot…

which lets the remaining Grenzer take out my Peacemaker.

Obi reforms the link and tries to take out the Guarda. I take a wound and fail guts further away, and Perseus chucks a grenade, which lets me dodge towards my engineer’s palbot with the Guarda.

I start by picking up the Clipper and repairing the Guarda out of Isolated with the Machinist and a Palbot. I move the Naga into the building and lay a mine, but Perseus dodges out of LoF of the mine as I lay it. I move the Guarda into the building, and then I start moving my link forward. First I take out the remaining Grenzer FO, but with all my maneuvering outside the building Perseus dodges into base to base with my Guarda.

I do manage to target Perseus with my hacker. I had thought about spending orders going after Perseus with the Guarda, but I figured that I would just outpoint him with the Guarda and the Naga, and then having the link there would make things extra awful for him. In retrospect, I should’ve just spent the resources to kill Perseus, and left the link where they were, as they were in a decent position already.

I then kill my own Guarda by triangulating fire into the combat from the Regular, forgetting that there’s already one wound on the Guarda. I hit Perseus twice, he passes both saves, and I fail my save on the Guarda, giving the room to Obi.

I think the game is over and am ready to call it, but then Obi suggests that I should try to take a shot with my Lieutenant or something, as I do have my Lt order left. Perseus passes another two saves, and I lose the Armory.

Obi’s got a 4-0 lead now, not counting the Panoply points.

Obi throws Mary under the bus to take out my Regular Sensor, and then pushes his remaining Grezner into the room before killing my Lieutenant and the Naga with Perseus.

I’m in Loss of Lieutenant, try some hail mary stuff, and can’t make it work. I even drop a missile on Perseus, who dodges closer to my models to prevent further missiles.

I do manage to grab something out of the Panoply though, and my Akali cancels Obi’s Secure the HVT, so I limit the damage to a

Well, I think that I gave up this game by not being aggressive enough. One note on the list, I think swapping Scylla for another Guarda would’ve been fine. She’s a little too fragile for what I need her to do in this mission, although maybe I’m not thinking about it right. In any case, just a few silly things:

I am very impressed with the performance of the Guarda. Who needs MSV when you’re BS 15!? I’ll be sure to take it more often in SAA and PanO. I’m excited about it the prospect of it. The Akali is a very affordable and excellent AD trooper, although now that it’s missing the E/Mitter it’s less interesting to me.

Not a huge amount of learnings from this game. There were some clear points of failure for me, even allowing for mistakes and misplays:

This would have let me not be in LoL at the bottom of 3. I then kill the Transductor near my HVT, kill the Grenzer with my link, and then just pile enough things into the room and get two things out of the Panoply. I probably can kill Perseus with something, and then use the Palbot to get stuff out of the Panpolies. This would turn it into a 6-4 SAA victory, because I’ll have 3 points for the room at the end, 2 points for panoply, and my classified.

So, not a huge amount of change as to what I did, and a much different outcome to the game. I’m happy with the outcome of my first outing with Acontecimento, I’ve learned from my mistakes, and I’m very happy to have faced Obi across the table again!

I do think that he was a bit aggressive with his Grenzers–they’re a bit fragile. I figure some Hollowmen might’ve been warranted, but Perseus was an excellent pick. What a jerk! So hard to dislodge. Thanks for the great game, Obi, looking forward to our next one! 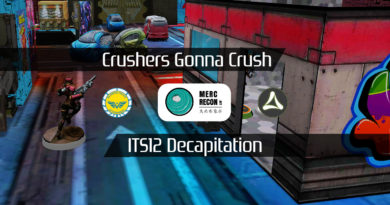 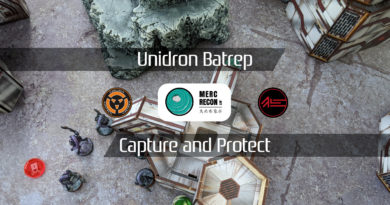 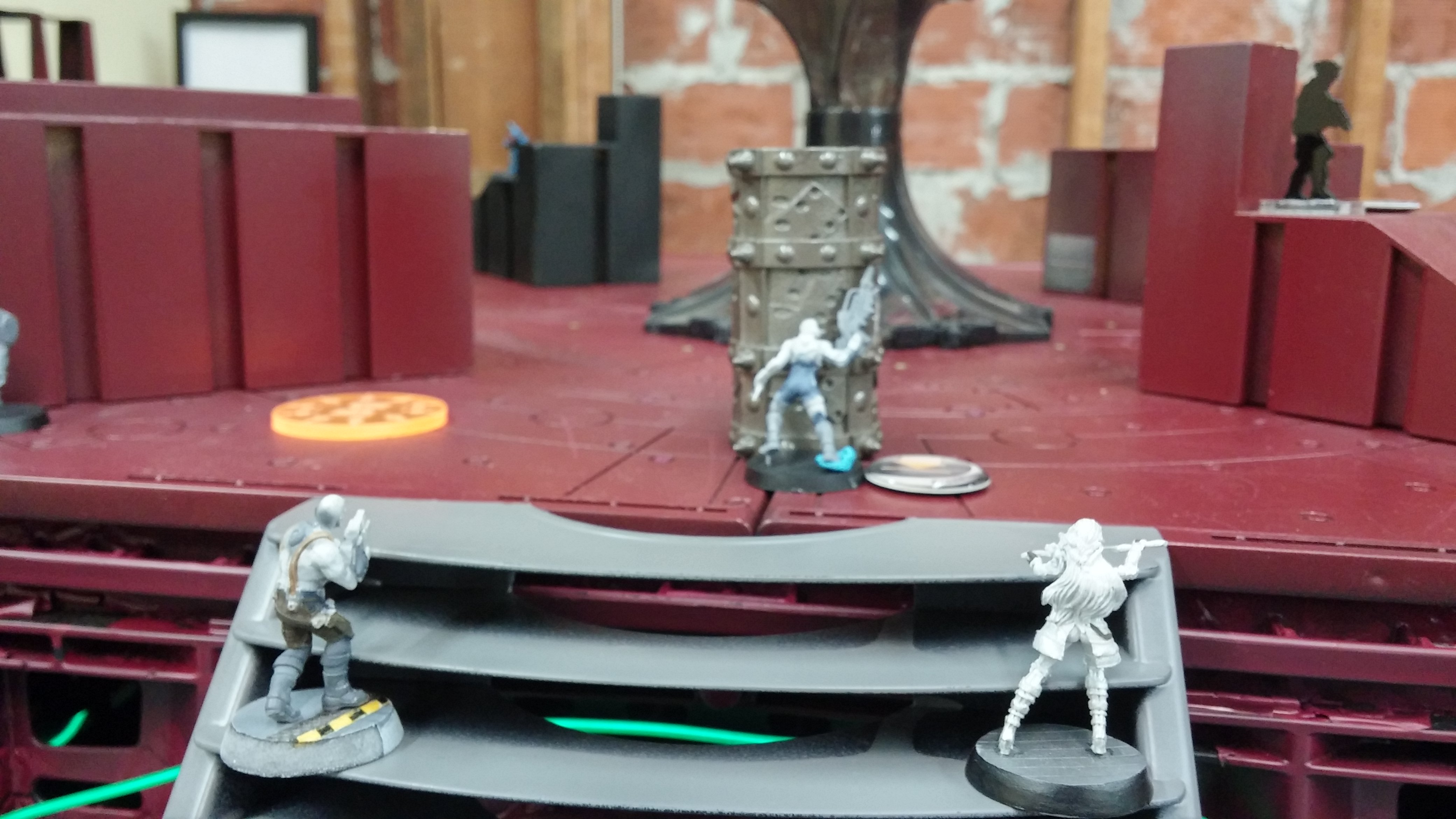