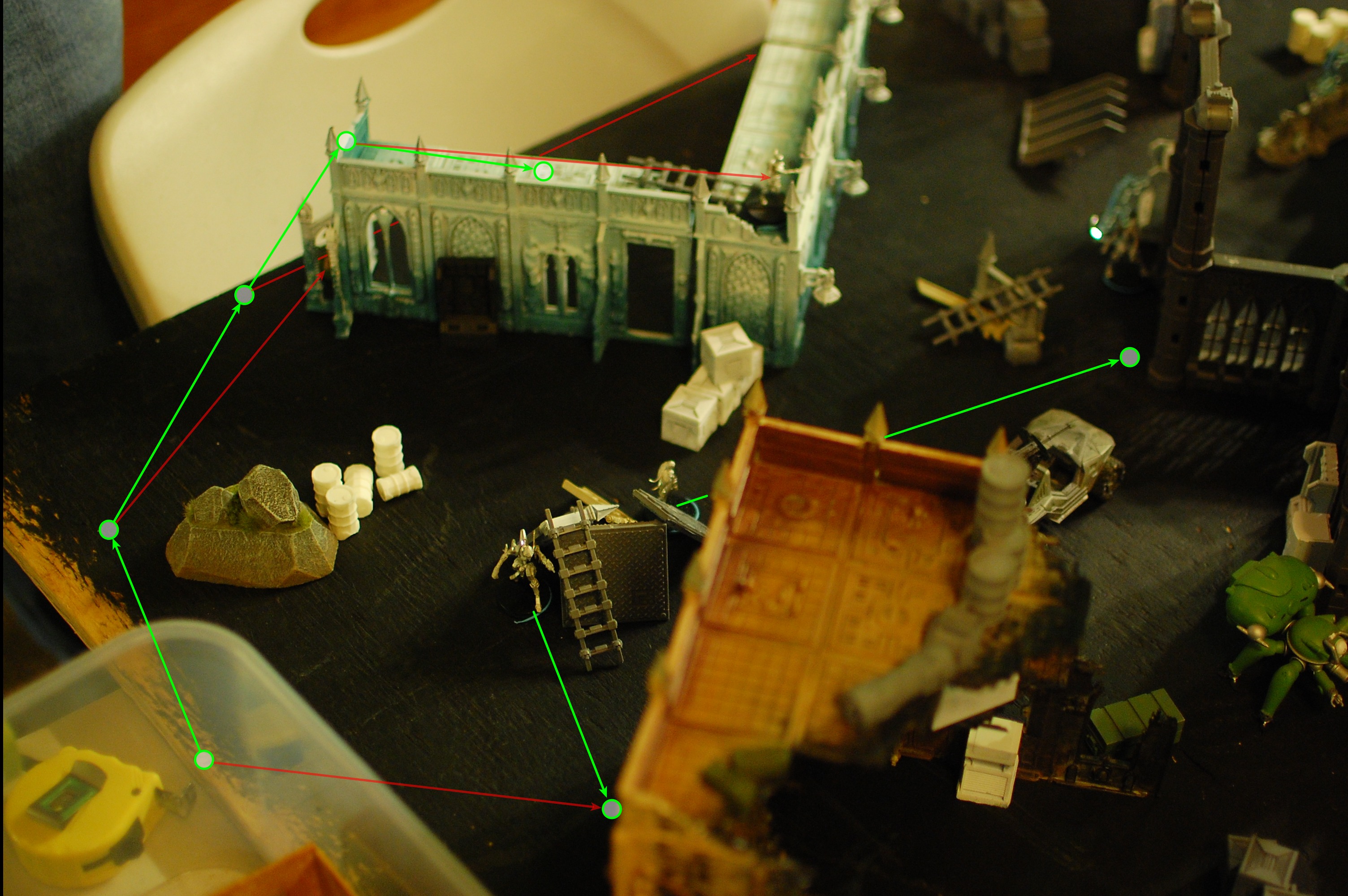 Played a second game on the same board as Hunting the Gorgos, with a few modifications here and there.  This game was against a pretty new Infinity player.  I went up against his 200 point Aleph list. 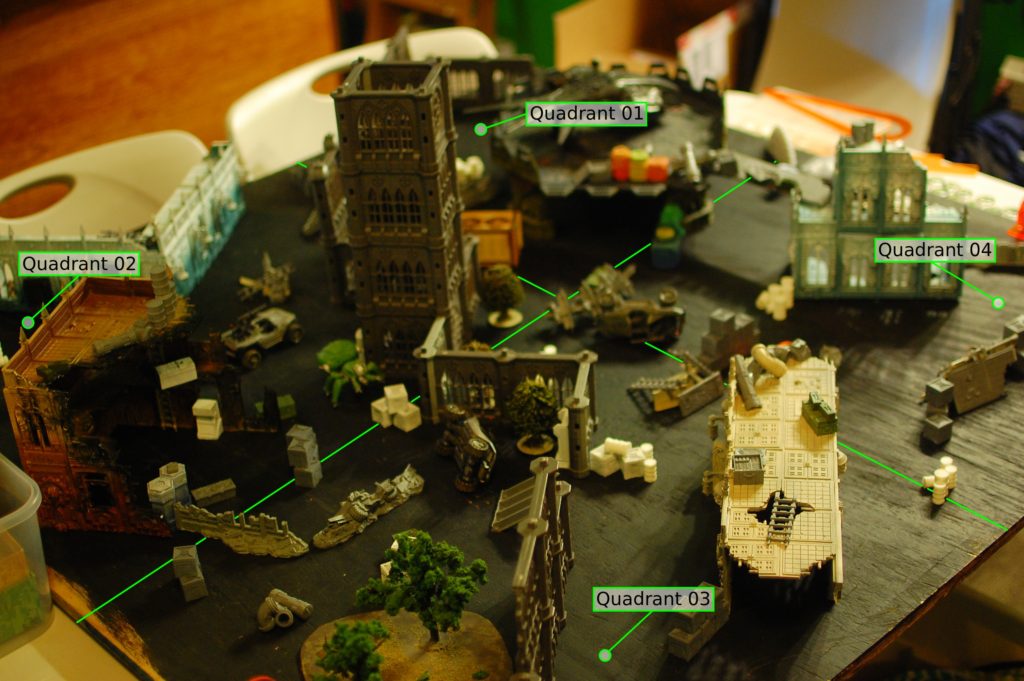 My opponent wanted to keep his forces as WYSIWIG as possible, so he took what models he had.  He also didn’t have any cool camo tokens so he borrowed my TO camo tokens for regular camo.  He also brought the adorable Tachikoma, the warthogs, and the Terminator HK drone you see on the table. 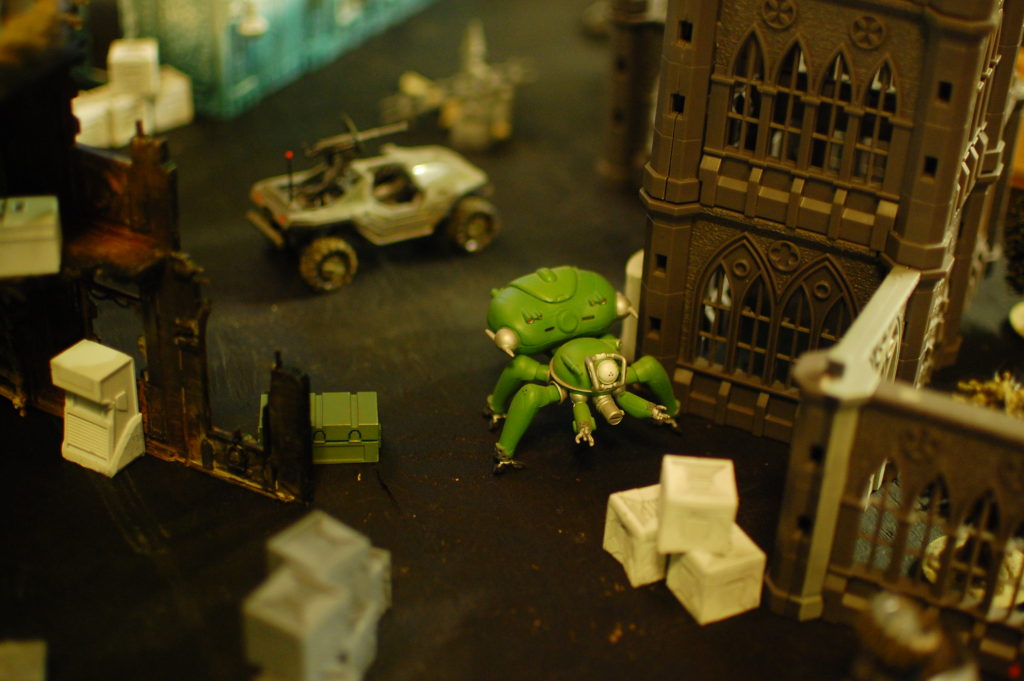 Priority alert! Nomad force is in your AO.  Intelligence indicates with high probability that among them, there is a Tomcat Doctor carrying a new experimental drug, fresh out of the Praxis Black Labs on Bakunin.  You are to lure the Doctor out, terminate him (Kill the Boffin), and obtain that drug at all costs (Collect). —Aleph Command

ALERT: A780K is no longer approved for use.  Potentially compromised at -20 standard hours. Confirm [y/N]? y

Interventor LT: Attention all forces!  We’ve just intercepted an Aleph transmission (Ambush).  They’re going after our comms relay.  Push up both flanks to secure the comms array! (Advance)  Current mission still stands.  Command needs us to get inside that supply cache and verify its contents (Forward Target) and keep it secure for extraction (Forward Base).  Let’s get a move on, people!  We can’t let that AI get into our comms systems!

I lost the roll off and elected to make him deploy first.  All my stuff was on one side of the table already from Hunting the Gorgos, so I chose the same side just to simplify things.  My deployment was largely the same.  Put my LT in the same place, because it worked so well the previous game.  Put my TR Zond where the Sin-Eater was, and bubble-wrapped stuff as best I could with Alguacils and Lupe.  Lupe was watching the side in case there were any AD things coming in, and I deployed the Zeros to ensure I had my Forward Base/Forward Target covered and to deny him his Forward Target.  I held my Zero near the Tachikoma in reserve, and he held his Asura LT in reserve.

He forgot that his Naga has CH: Camouflage, but he deployed her in a commanding position to take out targets across the board.  He scattered his Netrods around his backfield out of LoF to protect them. 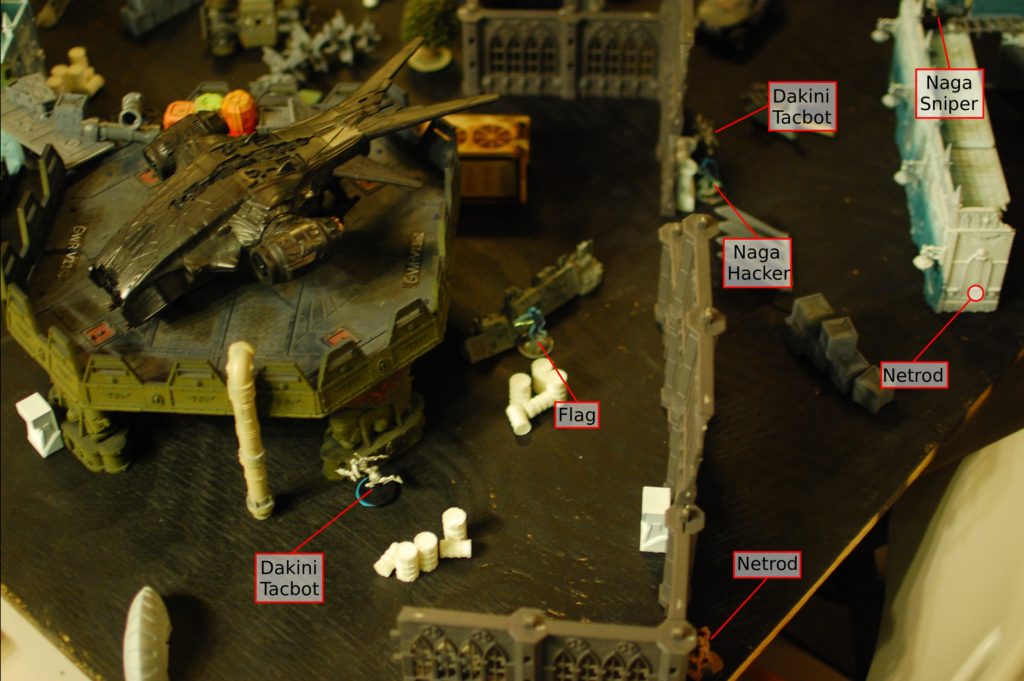 He placed his hacker as a camo token and put his Tacbots on both flanks and in the center.  He then put his Asura LT down in some cover, near the Tachikoma.

My opponent wasted no time in advancing on the comms array in the tower located in quadrant 02.  First thing he did was activate his Asura LT to wipe out the Zero I had guarding the objective.  ARO with the TR Zond put a wound on it, but the Zero just ate a DA bullet.  DA ammo is just rude.

Zero Minelayer: Aleph’s on the move!  I need the Zond!

Zero Minelayer: I have a shot!  Firing!

My opponent ran his center Tacbot into base-to-base contact with his forward target and passed his WIP roll.  He then pushed the Tacbot deeper into the tower, and got blown up by the sneakiest of mines.  He moved his Asura LT up as well. 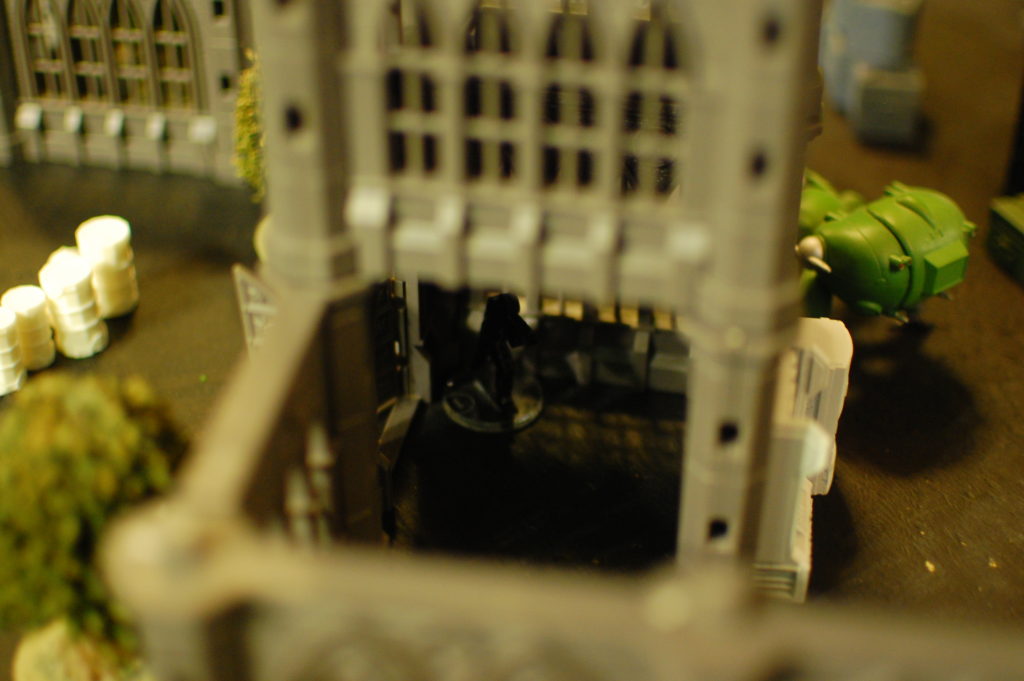 He pushed up both the Tacbots on the flanks, one behind cover on my left flank, the other on the right flank.  Lupe put a panzerfaust straight into the second Tacbot and blew it into scrap.  Then it was my turn.

I saw an opening in my opponent’s formation and dropped in the Tomcat Doc outside of everyone’s arc.  He dropped in behind the quadrant 02 Tacbot.  He turned around, but 3 dice are better than 1, and the Tomcat triumphed.  The Tomcat then proceeded to wipe out two Netrods, and then climbed the building and flamethrowered the Naga sniper, who was just outside of 8″ of everyone so was blissfully unaware of everything until she was on fire.  I dropped in my Hellcat HMG on the other side of the board and declared suppressive fire to prevent an Aleph advance up the midfield.

Tomcat Doc: I have an opening!  Moving in!

Interventor LT: Cut off their advance!

Interventor LT: Take out their sniper!  We need an open advance! 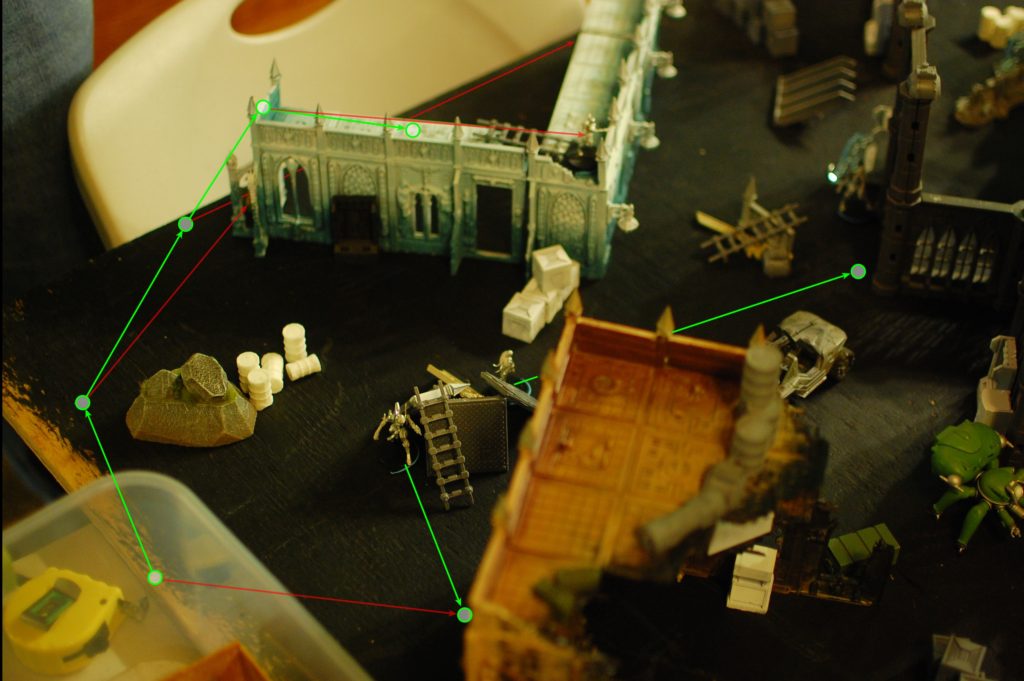 Asura LT: Noted.  Withdraw with caution—belay that!  Take down that Tomcat!

My opponent thought he was in retreat, so he used his retreat impetuous orders to shoot at my Tomcat with his Asura.  He failed the first time and I put another wound on him, but the second time the DA ammo came through for him.  I dropped suppressive fire on my Hellcat and finally put the Asura down. And with that, the game was over.  As it turns out, he wasn’t in retreat at the start of his turn due to the huge points value of the Asura.  Game ended 1-2 with the win going to Aleph.  Aleph got Forward Target and Kill the Boffin, and I got Forward Base.

Interventor LT: Secure that comms relay, and watch out for TO snipers!

Interventor LT: We’ll need to take it apart, see what they tampered with.  No one touch it till I arrive!

Interventor LT: Shit. This whole thing was a setup!  I’m putting in a call for reinforcements and some Praxis techs to figure out what was going on.  Lock it all down!  Lupe, set up a perimeter!

Lupe: Already working on it, LT!

That was a really quick game.   The Tomcat, pretty much all on his lonesome, wiped out my opponent’s order pool and almost put him into retreat.  Probably shouldn’t have alpha-striked so hard, as I put him in “retreat” and I couldn’t achieve any of my objectives.  Losing the Tomcat meant I lost Advance as well.  The game was so quick it was a bit difficult to pull together a coherent narrative (and my memory of the game is a little fuzzy at this point).  Hope you enjoyed! 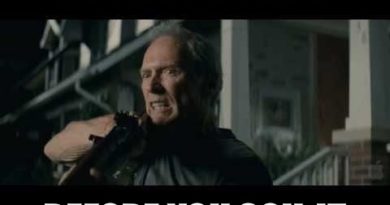 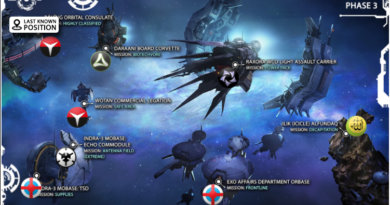