So, Adam and I did a bad thing and bought into Dropfleet Commander at Adeption 2018. After buying yet more minis before we even had our first game, Adam I packed up our stuff and headed over to the Portland Game Store (PGS) for a quick rundown of the game by Damion Spearman of The Hot LZ. Since this game is basically BattleFleet Gothic (BFG), it was pretty easy to pick up and get straight into puzzling out the newer mechanics like ground combat, activation cards, and so on. It has the same: “aaarggh I want to fill out all my points but it’s impossible!!” problem that BFG did, which is both nostalgic and annoying as hell. I used to play Tau, so I love ordinance and was obligated to take a carrier. Damion and I bounced a few list ideas back and forth, and he suggested that a troopship was the way to go, and that the Orpheus is more flexible than the Ganymede, so that made an appearance as well. Adam had sent me a few list ideas, but I had no idea what he’d actually be playing day of.

I arrived a little late to PGS, as is usual for me because I come straight from work and I’m never sure how many hallway syncs and conversations I’ll be having before I can escape with my model case. Adam and Damion had already set up their UCM and Scourge and were in the process of starting a game, so I hung around to heckle Adam’s bad life decisions and simultaneously watch an ISS versus Tohaa Infinity game that was happening on the next table. Damion is quite experienced and quickly defeated Adam, so it quickly was my turn to blow up Adam’s plastic ships! It’s been awhile since this game, so things are a little fuzzy at this point, and I didn’t take good notes. You’ve been warned!

I immediately discover the great sadness that comes from having three combat groups in a 500 point game instead of the maximum of four. Adam has a full round of activations to just punch me in the face! I start by bringing my group of two Echos, and Adam’s Moscow stomps its way onto the map in response, trying to be a silent as possible. Neither of us have any landing assets on the table yet, so Adam brings his Moscow on in the center and I opted for the same. Next, our launch assets show up with my Ikarus and Echos arriving at the same time as his Seattle. I drive my Echos up the right flank, figuring I can deny him the right and center clusters with my Echos, then I push my Ikarus to the left cluster to fight his Seattle, who is also heading that way. Finally, I bring on my troopship and strike carriers, sending the Orpheus to back up the Ikarus and the two Medeas to the center and right cluster, one each, dropping a layer as I do so. Adam brings on his Taipei on my left to blow up my cruisers and then sends his strike carriers in with his fourth card while I watch, annoyed that I only have three groups. He sends one to the left cluster and one to the center. His Seattle manages to get some bombers onto my Ikarus, plinking off 2 hull points.

My Medeas get into position to start landing dudes and I blow up the rightmost New Orleans with my Echos. Huzzah! Corvettes doing corvette things! I take some bombers to the face on my Ikarus from the Seattle, but pew pew Adam’s carrier with my Orpheus’s LAZOR. The Moscow blows up my pair of Echos in their own group, reducing me to two activations to Adam’s four. Ugh! The Taipeis get dangerously close to my capital ships, but I can’t shoot them yet, which super sucks. Nevertheless, I appear to be PHRing correctly–I’ve blown up half of Adam’s strike carriers and I have dudes in all three clusters by the end of the turn to Adam’s piddly single tank on the leftmost cluster. My Ikarus takes out a Taipei with bombers but not much else happens. 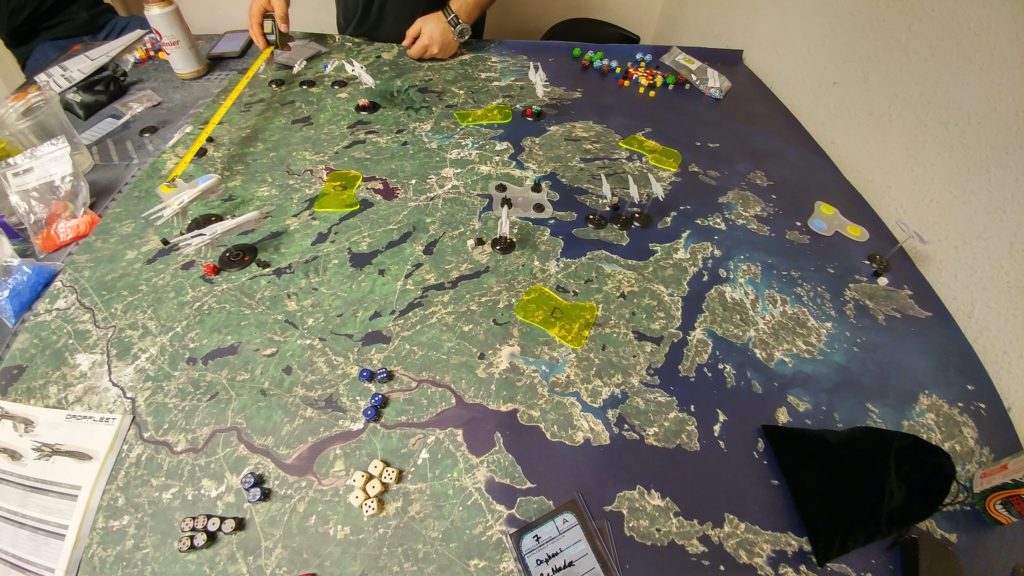 Stuff starts exploding. The Ikarus goes weapons free, putting some hurt on the Taipeis and the Moscow, but it’s not enough. The Orpheus manages to put some hurt on the Seattle as well. By the end of the turn, all the capital ships save the Moscow are crippled. I manage to land more troops though, and man the military installations to start taking potshots at Adam. I move all of my dudes on the left to take out Adam’s tank, and just blow it off the map without taking any casualties. Hooray! 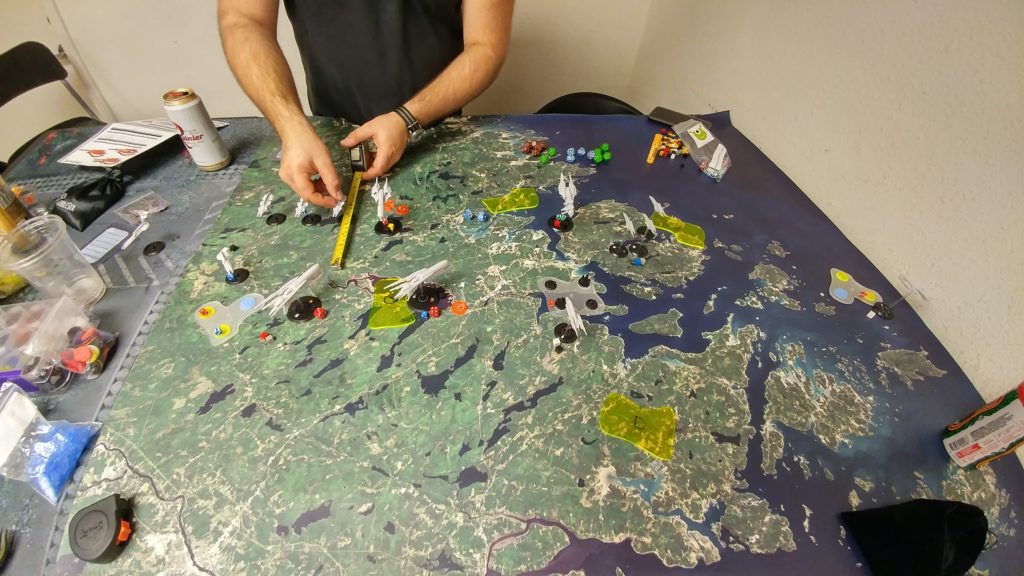 The Taipeis delete the Orpheus, but there are many explosions and the Taipeis also disappear. I think there’s one left by the end of things. The Ikarus and Echos cripple the Moscow, bringing its scan to 0″, meaning my Echos are safe! 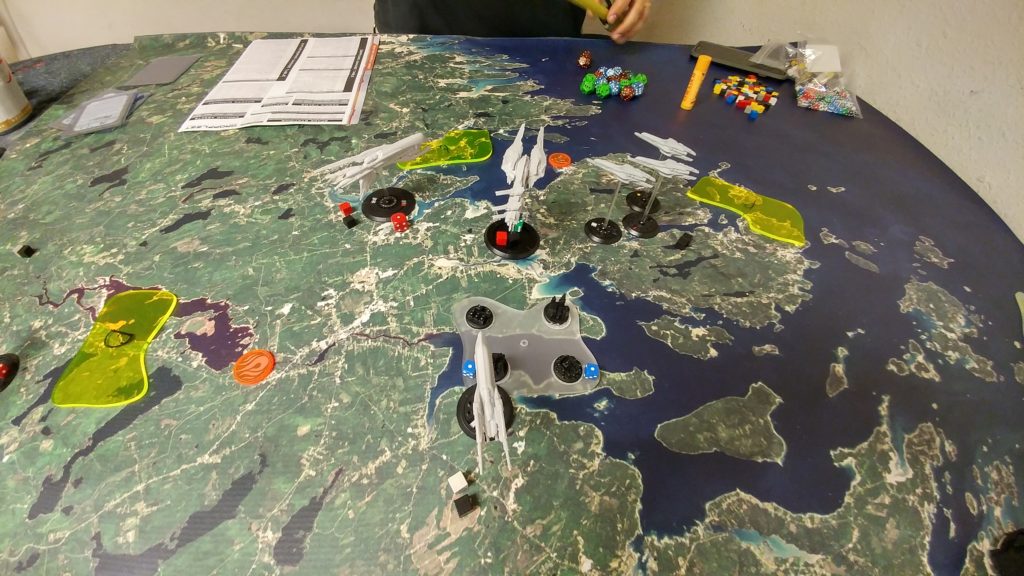 Sadly, my Ikarus is very not safe and is quickly blasted off the table by the Moscow. 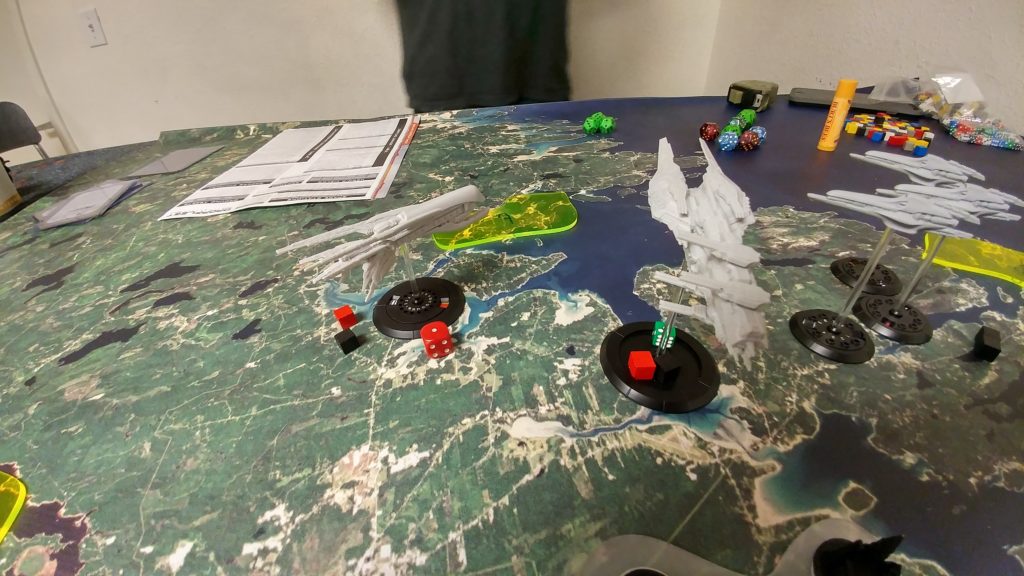 At this point ,we’re down to the end phase again, and I yahtzee the living daylights out of Adam’s single tank, rolling six four’s. 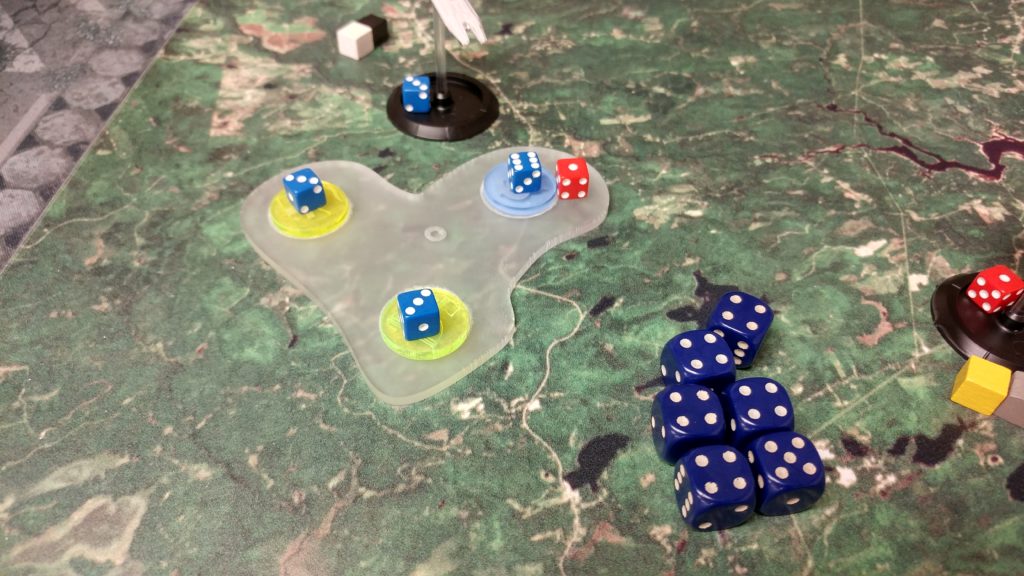 We call it at this point, since everything is basically dead and I have way more boots on the ground.

I have no idea how many points I scored. Damion rattled off some numbers but I don’t remember what they were or how he got there, but I have the bragging rights over Adam and that’s what matters! My spaceships are better than Adam’s spaceships! Mwahaha! 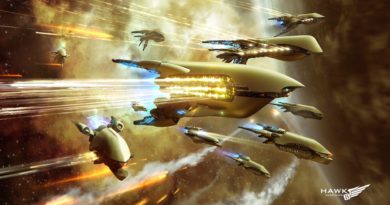 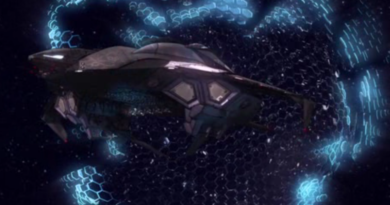 One thought on “Maiden Voyage”