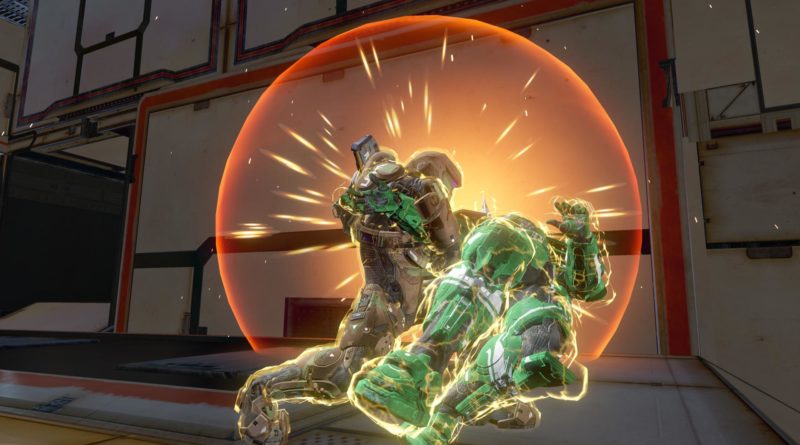 First up, credit for the sweet featured image goes to X tw0dr4g0nshots X. One of the benefits of visiting PJ beyond the great company and food is that PJ has a passion for the hobby aspect of our, well, hobby, and has some pretty sweet tables.

We played on his urban city table, which is directly at odds with the usual 45 degree placement of buildings that we’re used to. Instead of breaking up straight lines of sight by putting firelanes on a diagonal, we broke up the firelanes with holographic ads, cars, trucks, and an adorable US Postal Service van.

There were still some scary firelanes horizontally across the table, but you’d have to work to get there. PJ  hasn’t played Infinity regularly since back in the N2 era, so he was a bit rusty. Not one to shirk from a challenge, PJ put his newly painted ISS on the table, which he had never fielded before–he usually plays CHA. After much peering about and adjusting scatter terrain, we were comfortable with the table setup and we were off!

PJ won the rolloff and decided he liked a particular side of the table better, since it had more open lines of sight to the central tech coffin (the TARDIS, although I’m sure the Doctor would object to us calling it a coffin of any sort). I elected to go first, given that I had to deploy first, and set up to push through a central firelane of the table covered by my Irmandinho’s smoke. I didn’t know what was going to happen on PJ’s side of the table so I just carefully put everyone prone behind some cover in my Alguacil/Emily link team. My TR Zond was on the right, poised to rocket up the flank with the Irhmandinho there to fix it if necessary, and my Lunokhod gave Uhahu some additional hacking coverage on my left. Uhahu herself parked behind a white truck in the center of my deployment zone.

I stuck my Brawler behind a building on the left just in case a Garuda came a callin’, then stuck my Cateran on a roof (he was my reserve, but I took the picture at end of deployment).

PJ brought a Wu Ming Pain Train with HMG, FO, CR, and HRL backed up the the Zhanying Sensor Lt. He bundled them onto a building with the FO and Chain Rifle Wu Ming on the stairs, prone, with the two heavy weapon troopers and the Zhanying exposed to ARO.

PJ put a smart missile bot on the right, backed up by a Yudbot, and a FO bot all the way on the left, on the first floor of the Comanche barracks, also backed up by a Yudbot. The Sophotect controlling both bots hung out at the base of the Wu Ming’s building, behind everything. 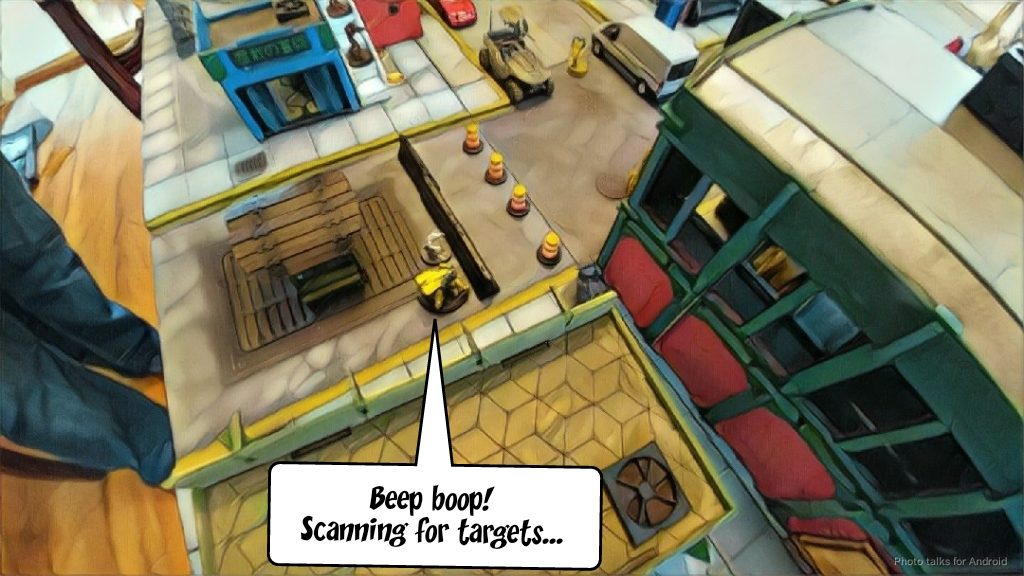 As I mentioned before, I put my Cateran all the way on the back left of my deployment zone with the Brawler Lt nearby, and the Su Jian came down on my right, near the smart missile bot. After nominating link team leaders and DataTrackers (mine was Uhahu and PJ’s was the Sophotect), we were off!

PJ elected to deduct two orders from my second pool, assuming (correctly) that I had some scary camo tokens in that group. I had eyeballed the Irmandinho’s distance to the corner of the building properly, so when he ran towards the alleyway I intended to advance through I chucked smoke at his feet to block LoF from the HRL to my ML if my ML stood up. I only would have LoF to the Zhanying, but the template would cover the Zhanying and both the HMG and HRL Wu Mings. 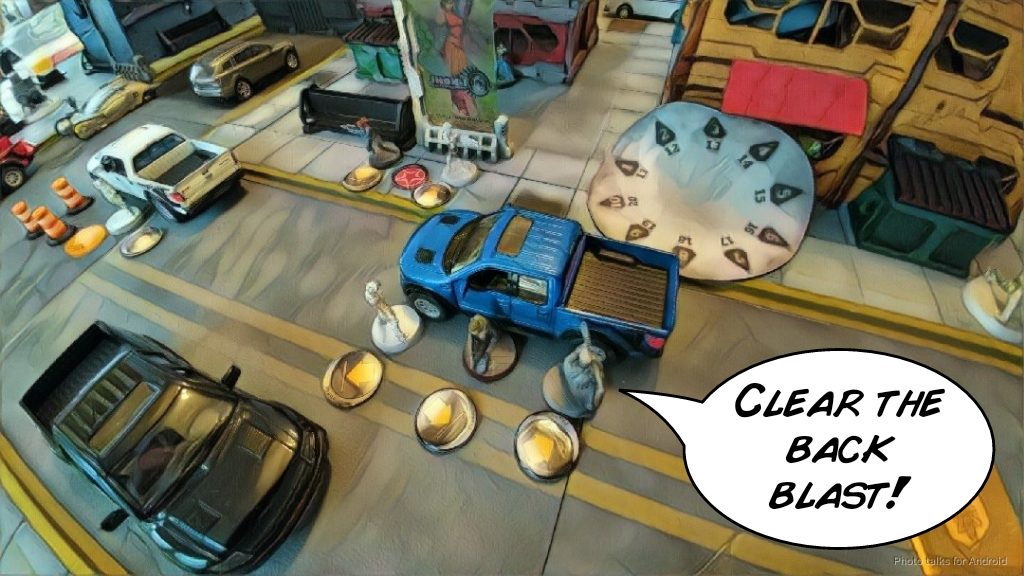 I wanted to ensure that the rest of my link wasn’t caught in the HRL blast, so I spent an order to scoot them away from the danger zone and on the next order stood the ML Alguacil up and let fly.

The first shot liquefied the Zhanying, but both Wu Ming made their dodges. 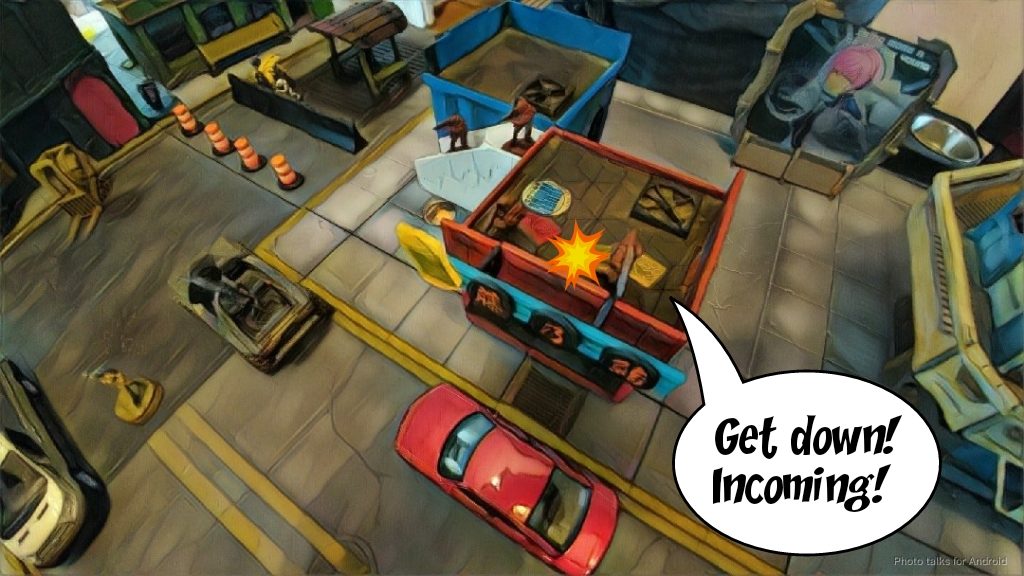 The second shot knocked out the HRL Wu Ming and put a wound on the HMG, causing a failed guts save and a drop prone.  Now that I had forced the Wu Mings’ heads down, I threw the Cateran at the FO bot, but we both whiffed our shots. Boo hiss! I thought Caterans were supposed to be good or something! I spent the Irmandinho’s order moving him a little further up and started focusing on my left flank.

Cereal Killer the Bandit handily Redrumed the Celestial Guard hacker, recamoed, and attempted to glue the Su Jian. While not ideal with the Yudbot nearby, at least it would cost PJ orders. 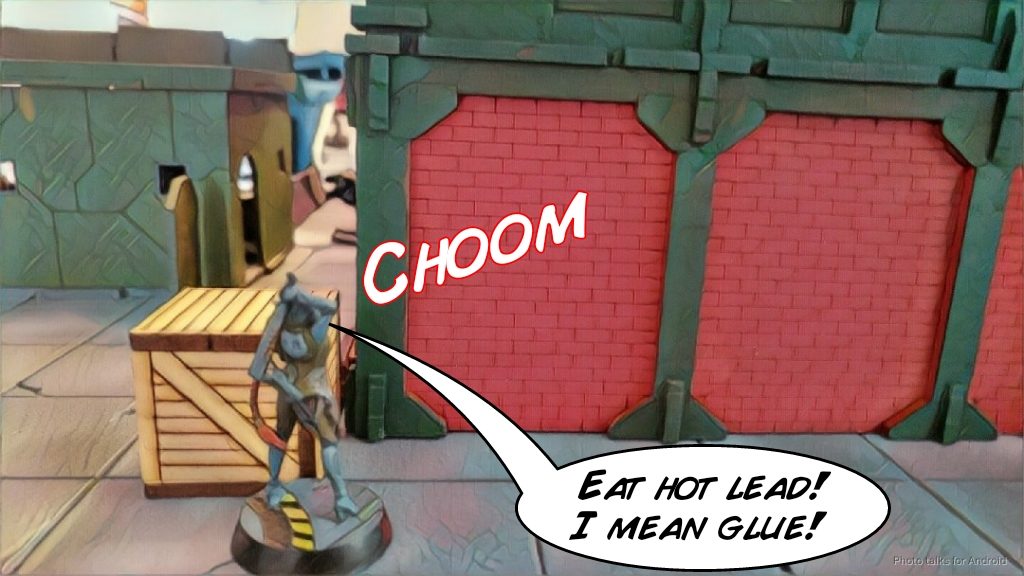 Sadly, I whiff my ADHL roll and the FO Wu Ming flash pulses my bandit. I fall back around the corner and try to accomplish some different goals, namely fixing my link team’s horrible positioning and then pass the turn.

PJ informed me that he was in loss of lieutenant — I hadn’t expected that, but I’ll take it! I suppose in retrospect that his lieutenant was obvious but I wasn’t thinking actively about lieutenant sniping anyone. In any case, PJ climbs the Sophotect up and then spends the smart missile bot’s order to try and pick up the Wu Ming HRL, killing it with a botched roll.

The Su Jian activated next, blasting my Bandit with its shotgun while I tried to engage — perhaps I should’ve shot back with my LSG to get the better odds but tying it up in combat sounded much better. In a loss of lieutenant turn I probably should’ve shot, then moved into base to base on the next turn and had the dice off then. Ah well.

The FO bot Triangulated Fire Forward Observed my Cateran and then the smart missile bot turned him into red mist. Gragh. In any case, the Wu Ming spent a few orders to get to the base of the stairs and take cover behind a Halo Warthog before PJ passed the turn, nominating his Sophotect as the new Lieutenant. Clever move!

The Irmandinho chucked smoke into the alleyway, covering the Al’Hawwa. I spent the rest of the orders in that pool attempting to push the button on the right, but failed twice. What happened to Haqq’s legendary WIP?! Bah humbug. I sunk a few orders into trying to kill the FO bot with my TR bot, but neither of us seemed to be able to do anything. I focused my attention elsewhere and pushed my link forward, clustering them at the mouth of the alleyway to defend it while trying to defend the left side from the approach of the Su Jian (not very well either). Now that I was closer to the Wu Ming, I dropped an E/M grenade on them with Emily’s amazing statline.

Sadly for me, while all three failed their dodge, two passed their BTS. I needed to get Uhahu into the fight and prepared to get to the central objective, so I used some coordinated orders to move the Lunokhod up while getting a pitcher from Uhahu as close to the Wu Ming as I could manage. Sadly only one of them was in range of the repeater, and it was the already isolated and immobilized middle one! Drat!

With only one order left, I tried to drop in Raoul behind the Su Jian…

But failed and ended up scattering off the table, so I just put Raoul on the left as far up as legal to be a speedbump for the Su Jian.

I spent my last order on a second coordinated order to reposition Lunokhod a bit (it was a millimeter out of cover). I included the TR bot, which was finally able to drop the pesky FO bot into unconsciousness level 2. 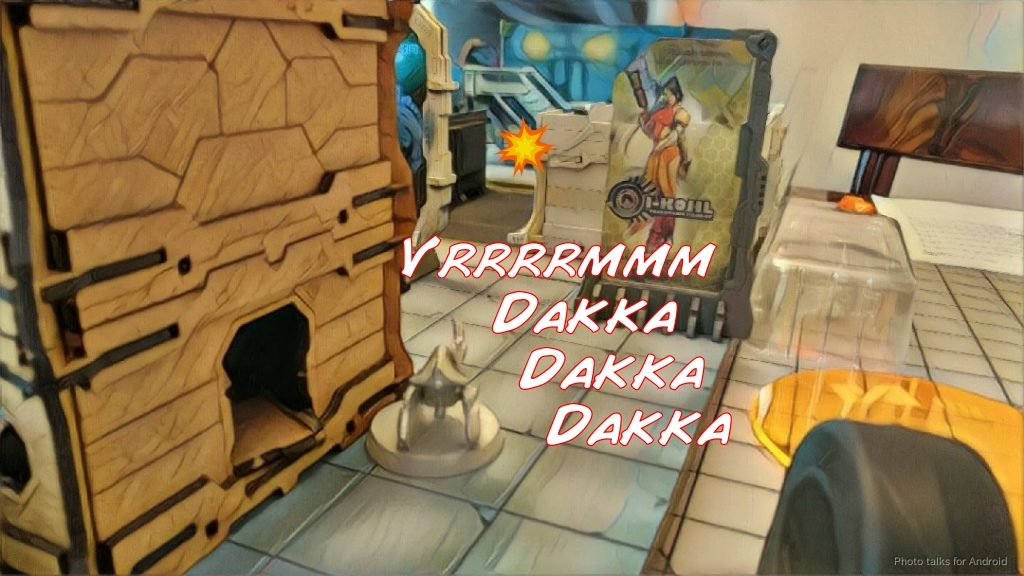 Not a terrible turn, and I was out of orders so it went to PJ.

PJ set about punching his Su Jian down my left flank, exchanging fire with my Lunokhod on the way up. We were out of 8″ but I beat PJ’s rolls and dealt a wound thanks to the Lunokhod’s heavy shotgun. The next order brought the Su Jian closer, into repeater and flamethrower range…

Carbonite from my Al’Hawwa succeeded but Oblivion from Uhahu failed, immobilizing the Su Jian and arresting its rampage. I lost the Lunokhod the catbot’s shotgun, but not before the flamethrower put it into NWI. With the catbot halted, PJ got his Sophotect down the stairs and into a position to fix the E/M’ed Wu Ming.

After some repositioning of the Wu Ming along the street, PJ passed the turn.

My Irmandinho did some fancy smokework to protect himself and the Al’Hawwa, who finally pushed the necessary button and recamoed himself. I brought my HMG Alguacil to bear and downed the HMG Wu Ming, but we both missed a Sophotect ARO. Since it was a friendly game, we rolled it anyway and my HMG dropped. I needed to deal with the Wu Ming and the Sophotect this turn, so I attempted a regular spec fired grenade from Emily solo, covering the FO Wu Ming and the Sophotect from Emily. They passed their ARM rolls like champs, but the Sophotect dropped prone. This freed up the Irmandinho to cover the Tardis (Tech Coffin) with a smoke grenade, letting Uhahu get into base to base with a coordinated order to shuffle the Algauciles around.

My Paramedic successfully picked up the the HMG, and I spent my last command token to reform the link, with the missile launcher watching the likely approach path of the Su Jian… but he was exposed to a flank from the FO Wu Ming, a fact that I missed…

I attempted a rifle shot at the Su Jian with my Lieutenant, but took a Panzerfaust to the face…and survived! I only had Raoul’s order left, so I pushed him forward out of LoF of the Su Jian and tried to throw a drop bear, but he whiffed.

PJ was down to a handful of orders. He wanted to drop a template on my link team from the smart missile bot, so he attempted to FO my ML Alguacil over the course of a 2 or so orders. it ended with the Wu Ming being ground into paste by the link team’s return fire, along with the Irmandinho’s chain rifle. 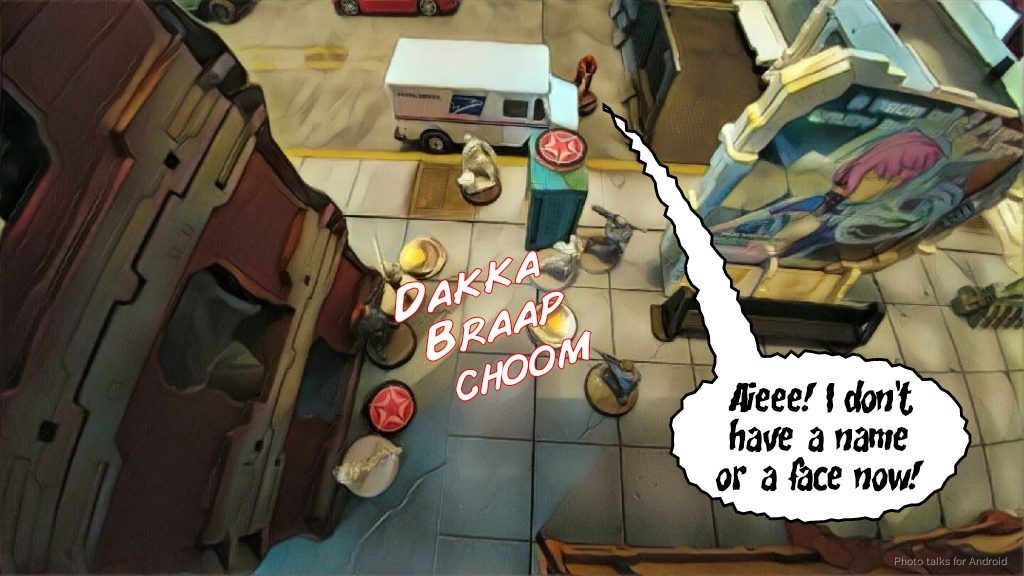 The Su Jian attempted to get past Raoul, but Raoul’s BSG put an end to that dream. The Wu Ming chain rifle killed Uhahu though, so with the button pushed and the Al’Hawwa in base to base with the objective, it was a

Thanks to PJ for hosting and for a fun game! 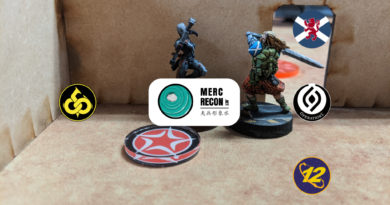 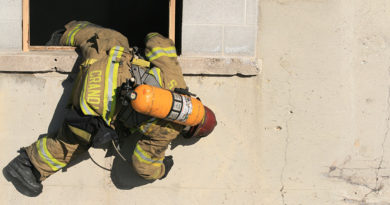 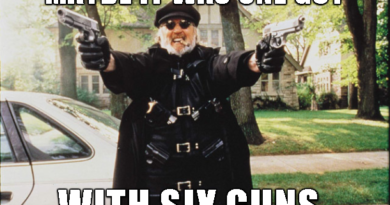 There Was a Firefight!!