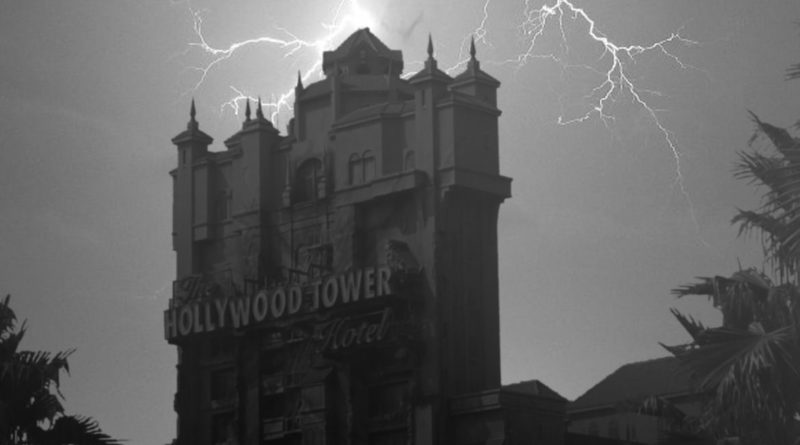 Took a weekend trip down with Adam (TheDiceAbide) and our better halves to go visit Alex (Twinmasks) and his better half. Alex makes it up to our monthly tournaments on occasion, but it’s always nice to go visit him and make a round of the breweries and try some new awesome restaurants. After a day of over-eating and delicious beer, the rest of the crew parked in front of some Netflix to nurse their food comas while Alex and I settled in for a game of Infinity. Alex has three tables more or less always set up, and we decided to play on this one:

Alex asked if I wanted to make any changes to the table, but I’m a big proponent of playing the hand you’re dealt in Infinity, so to speak, so all I did was swap the facing of the unpainted wood dice tower Alex put on his table (very handy) so Alex could see the results of my die rolls. He’s planning on playing in the upcoming Nuclear November tournament, so he asked if we could play Supplies to get some practice in. I had just made a new Nomads list to try, but after looking at the table it was pretty clear that I’d need the Intruder and his trusty MSR. We’ll have to wait till later for new Nomads action, I guess!

I whiffed on my lieuteant roll, so Alex decided to go first. He informed me that Sun Tze was going to show up, so I’d have to deploy everything and Alex would get two reserves. First thing down was a TR bot on a roof in the center of the table. Ugh. A Chaiyi backed it up to provide a repeater for hacking coverage from the Panguling EVO on the left. 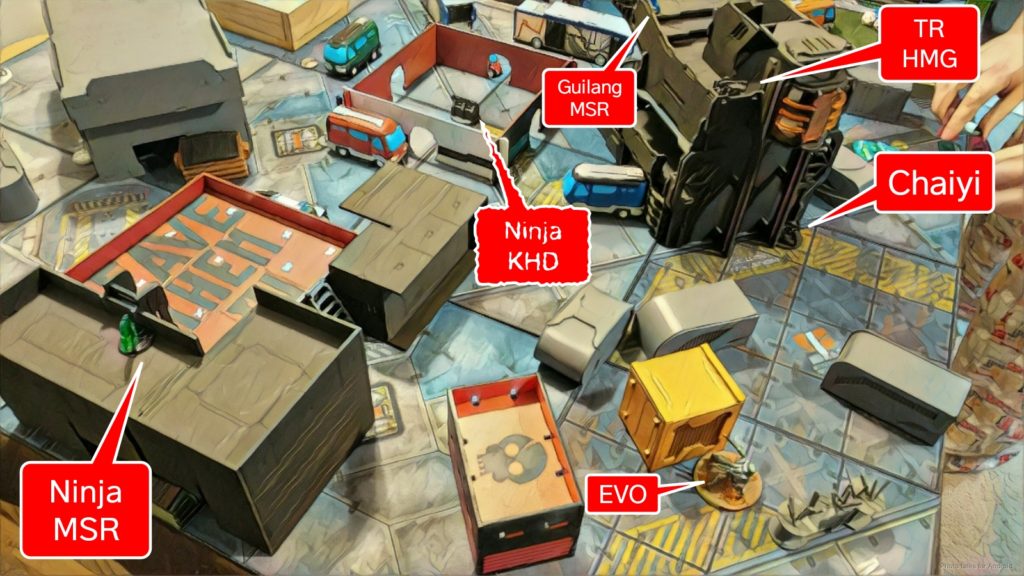 Alex put a Ninja KHD in the center of table, next to the central objective, and a Guilang FO next to the right objective (Alex’s perspective). To back up his TR bot, Alex throws a Guilang MSR on the roof of a tall building. At this point, he’s got 6 things down, with one in hidden deployment.

This basically screams AD to me, so I deploy accordingly. I deploy my Zondnautica dismounted, with the AHD Zondnaut in total cover watching my back table edge with Zoe and Pi Well nearby. My Zondmate protects the general area with its chain rifle, and I set up my Intruder to deal with the TR bot later.

I carefully place my Morans and Koalas to counter AD and to drain orders, hoping it will be hard to get angles on the Koalas to shoot them off the table. My Kriza and Interventor go down on the left, backstopping Mary. Aida went down in the middle, facing backwards and hoping all would go well.

Once this was done, Alex leverages the Bravery rule to forward deploy Sun Tze atop a tall building on my left, where Sun Tze’s sniper rifle commands pretty much the entire board. As if that wasn’t bad enough, Alex puts down a second Ninja, this time with a MULTI Sniper Rifle, on my right. Fully deployed, we shake hands and get to rolling dice.

Alex starts things off by taking a shot on my Zondmate and one of the Koalas covering the right table edge against AD, knocking them both out with Sun Tze’s sniper rifle.

He then takes out Pi Well with a crit from the Ninja MSR on the other side of the table from Sun Tze, attempting to take out Aida as well by splitting burst. Thankfully, the Ninja misses Aida.

With Pi Well and the Koala down, this opens a nice hole for a Tiger Soldier to walk on the board.

It takes two orders, but the Tiger Solder drops my Moran, effectively knocking out the Koala covering the central objective.

This frees the Ninja KHD up to grab supplies from the central objective and retreat.

Alex then does a coordinated order, retreating the Ninja KHD, prepping the Guilang FO to grab the left objective, advancing the Tiger Soldier, and taking a shot on one of the left Koalas with the Ninja. Sadly for Alex, the Ninja whiffs the shot. 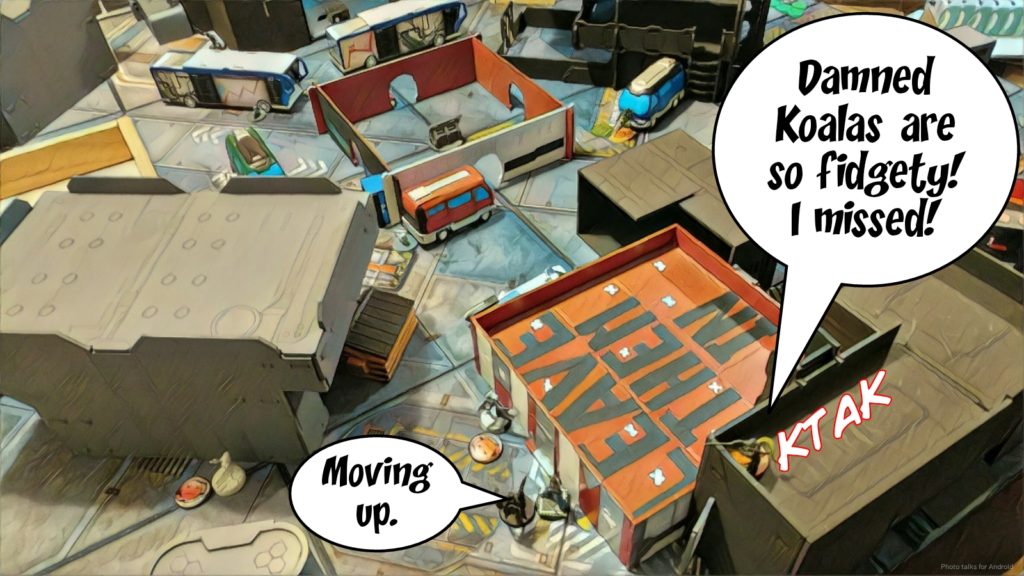 He tries again, splitting burst between the Koala and Aida, but misses both.

Thankfully, he’s out of orders to keep trying and instead snags Net Undermine with his Tiger Soldier.

I cancel my impetuous order so I don’t immediately lose my Zondnaut to Sun Tze’s lurking sniper rifle, but spend my first order poking her out a little to see the Tiger Soldier without exposing her to Sun Tze. Thankfully, the dice go my way and I drop the Tiger Soldier. 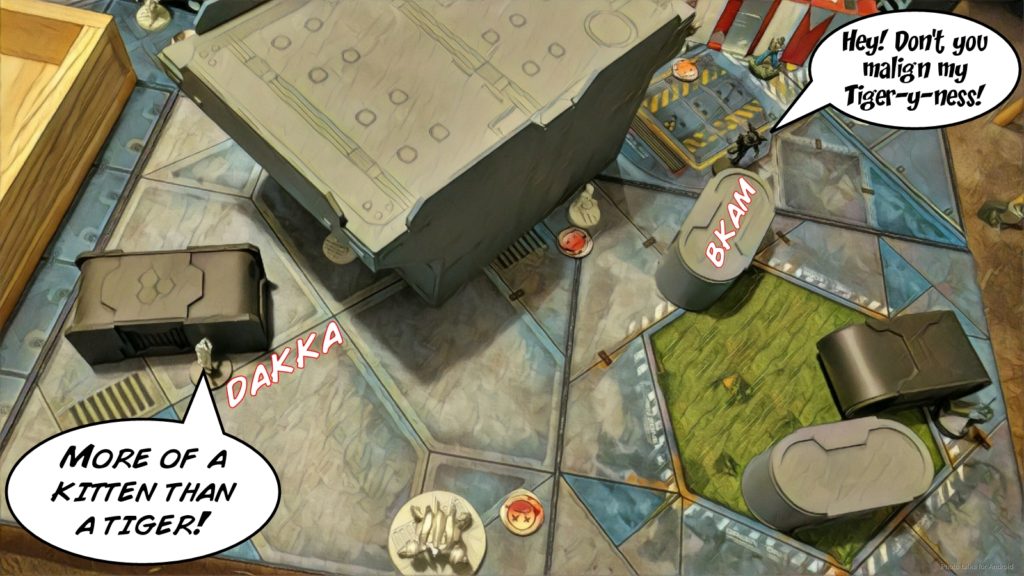 This frees the Intruder up to take out the Ninja MSR from within 16″. Not the best odds, but I at least forced a dodge, which the Ninja failed, along with that all important ARM roll. 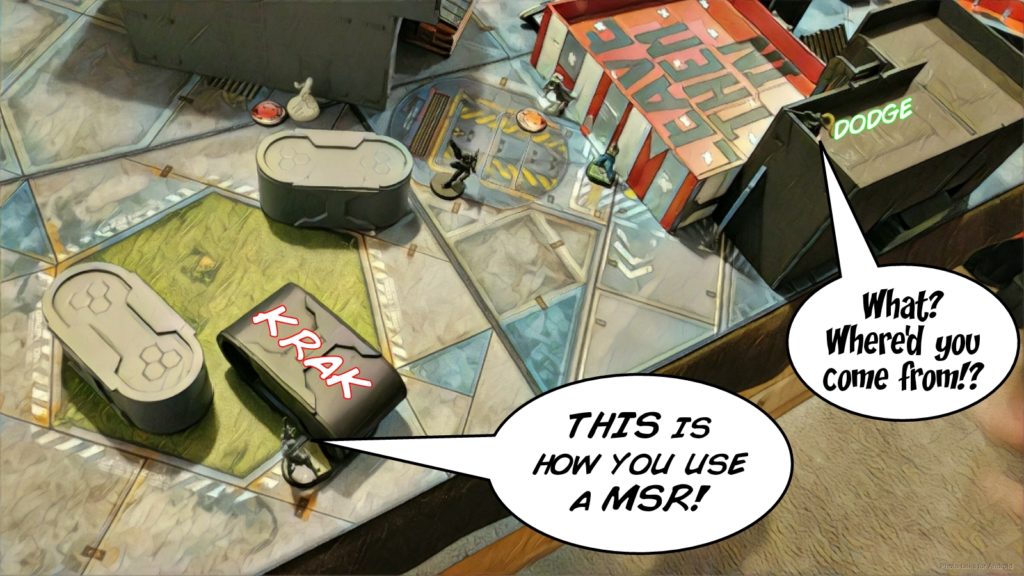 Sun Tze has me completely boxed in, and I can’t use the Kriza because I’d have to fight through a TR bot to get to Sun Tze. The Intruder could take out the TR bot, but I need  a more expedient, reliable solution. I climbed Mary up towards Sun Tze, snagging HVT: Espionage on the way.

Alex reset against Mary, as he was fearing a Spotlight, so I was able to get on the roof without incident. Rather than deal with my ODD, Alex opted to Nanopulsar Mary, trusting in Sun Tze’s armor to protect him from her SMG.

It didn’t, shocking him off the table, and Mary survives the swarm of nanobots by quickly activating some BTS countermeasures. I pick up Pi Well with Zoe, and pass the turn.

Alex started Turn 2 in loss of lieutenant, and opts to go for a Lieutenant snipe with another Tiger Soldier BSG, attempting to land in my DZ behind my Kriza and Interventor.

Zoe and Zero Cool the Interventor just barely hacked the Yu Jing transport aircraft, with a pair of 2’s to the Tiger Soldier’s 1, sending the Tiger Solder off the board and then to Alex’s deployment zone on my left.

Alex doesn’t want to risk his Guilang to my Koala, so he buffs his TR bot and then takes it out. 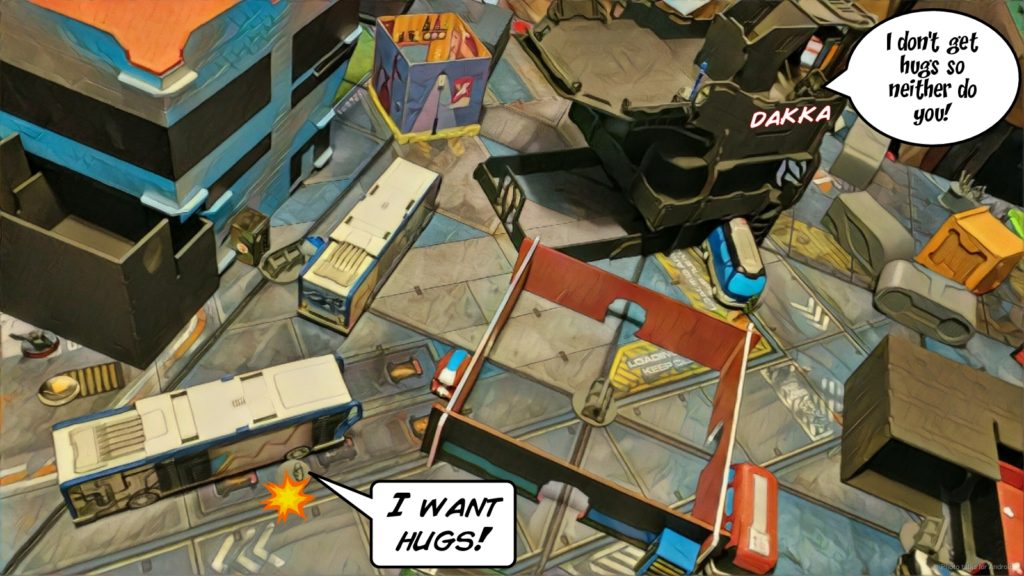 Without any opposition, the Guilang FO is free to grab an objective and retreat.

Alex spends the remainder of his command tokens converting orders and then spending them on coordinated orders, advancing his TR bot, Guilang MSR, and flash pulse bot and retreating the Ninja KHD and Guilang FO to the safety of the tall building in his deployment zone. Which has a convenient elevator. Great. At the end of the turn, the Guilang is a move away from the elevator and the Ninja (Alex’s new Lt) is sitting in it.

I’ve got to clear out Alex’s AROs, so I spend two coordinated orders on the Kriza and Intruder to take out the buffed TR bot, who chooses to F2F against the Kriza. On the first order, the Intruder whiffs and the Kriza connects, but the TR bot passes ARM. On the second order, it’s the Kriza’s turn to pass ARM, which he does, and the Intruder finally connects, knocking out the bot.

I spend a third coordinated order on the Moran, Kriza, Intruder, and Mary to discover the Guilang MSR, then gun it down with the Kriza.

Pi Well attempts to take out the advanced Chaiyi and is crit flash pulse instead. Zoe picks up the Zondmate and scurries back towards the building she started near. I’m almost out of orders, so I try to land a pitcher on the roof of the tall building. It takes me two orders to do it, and then I spend my last order trying to lightning the Ninja off the table, but Alex passes BTS. 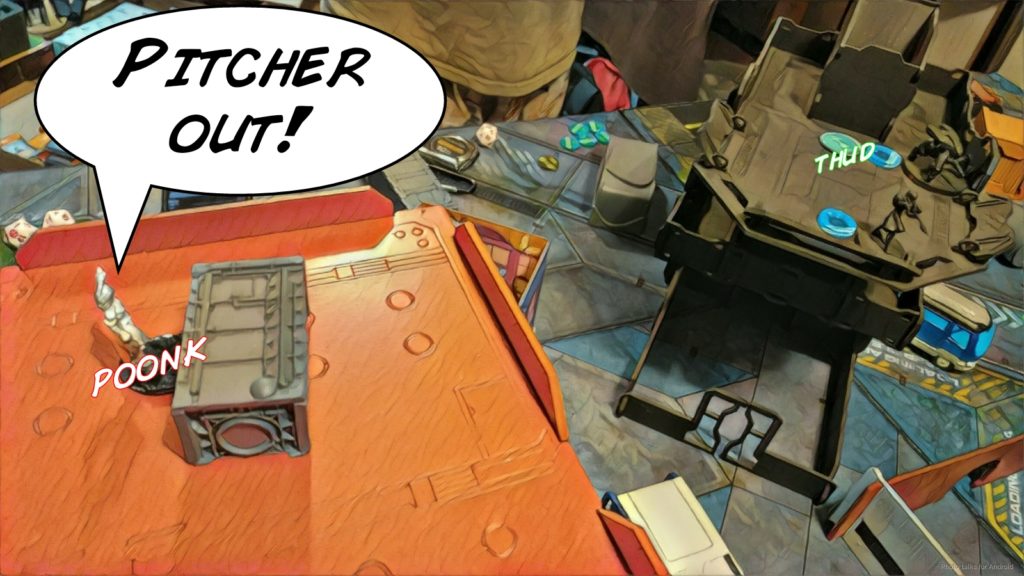 I debate trying to sucker punch the Ninja with my Lt order, but decide it’s not worth it, and pass the turn.

The Guilang scrambles into the elevator, and Alex drops the Ninja prone to avoid getting shot by the Intruder when the elevator makes it all the way up to the top, resetting as his second short skill. The Ninja dies to a critical sucker punch from Zero Cool, but passes BTS against a successful Lightning from Mary. Probably unnecessary to risk the Ninja like this, but this has otherwise been a pretty clean game from Alex the whole way!

The Guilang steps out of the elevator, and then Alex advances the remaining Tiger Soldier to pressure Mary.

Now that the Zondmate is back up and Alex’s AROs are gone, I spend my impetuous order to move up the Zondnautica pair. My second order gets enough smoke down to protect Pi Well on an objective run, so I dash him up as part of a coordinated order to advance the Moran and Aida. Another order and he’s grabbed some supplies. 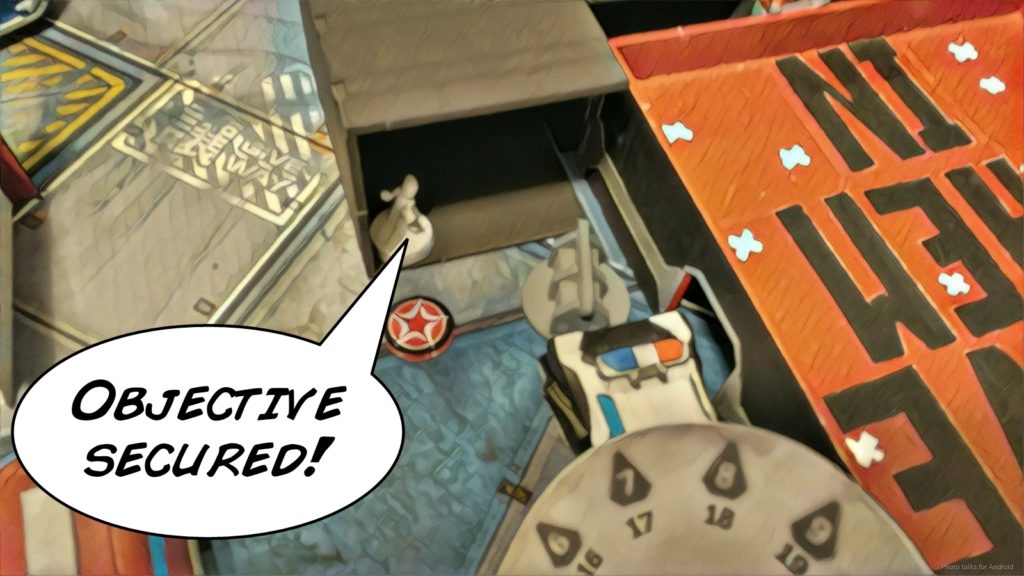 Now I’m faced with a choice. How do I go about getting the maximum number of points? I could attempt to kill the Guilang on the roof, which Mary can see if she scoots around a bit, or I could rush Aida or the Moran up the field, calling the elevator to the ground floor, and picking up the Ninja’s supply box. Of course, I didn’t think of the latter option, and committed to the former, figuring that if I had one and Alex had no boxes it would be an 8-1 game. In any case, after blowing a bunch of orders on white noise and spotlight through Mary’s pitcher, I attempted a long range SMG shot on 5’s and was rewarded with a bunch of misses as the Guilang dodged to safety. I don’t have enough orders to do much else except try to get another classified by scanning the nearby Tiger with Mary, so I fail to do that and end up just Securing the HVT instead, making it a 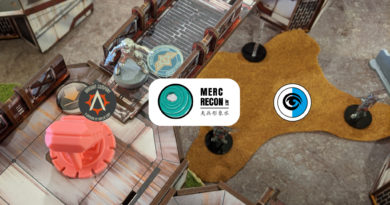 Dah VIRD is the Word

5 thoughts on “Lightning on the Tower of Terror”