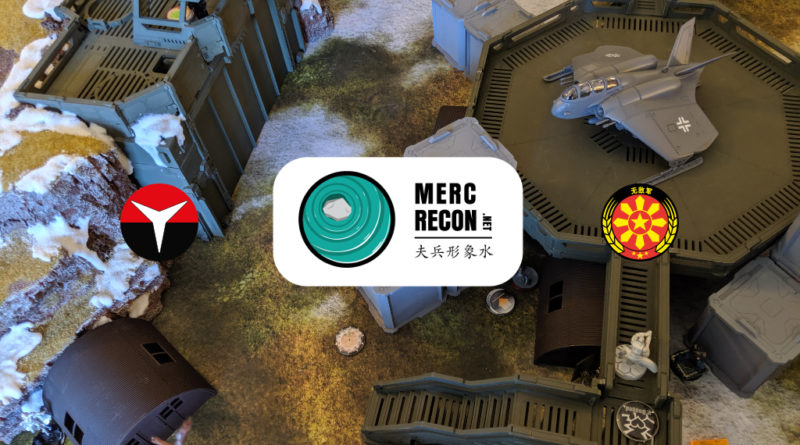 So, Dan (White_Lang) is traveling to the Colorado Krug coming up soon and wanted to brush up on some different Infinity matchups for his Invincible Army. He asked me to give him a hard time with some hacking, which meant dusting off my Nomads and dialing up the cyberpunk to 11.

I’m going to start posting the bare table photos so people can get a sense for the terrain without having to deal with all of the deployment annotations.

I went all in on hacking and went very light on guns, with the Kriza and the Spektr being called upon to do most of the heavy lifting in terms clearing the way. I got a fair amount done with 1337 h4x0rz though.

I actually wrote Dan’s list, just because he was going through a bit of analysis paralysis with list building. Certainly needs some tweaking, but given Dan’s penchant for playing LI lists almost exclusively, I think this ticks most of his boxes and can handle some of the mission load of the Krug.

Dan hid his Mech Engineer on the left (the Yaozao was on the right) and then tucked his link into a section of catwalk ready to make a push for the central landing pad. His Hac Tao was hiding on the mountaintop, with the Daoying hanging out at the bottom of the mountain.

I had a lot more to deploy. I covered the right table edge with Koalas and a Moran, in case Dan wanted to walk something in on that side, and or come down the right corridor. I didn’t do a great job of contesting the left, because there just isn’t a ton of cover there so it’s hard to make it across the gap.

Still, I didn’t want to leave the left completely undefended, so I covered the corridor with a Moran and his Koalas, and then stuck the Spektr there for good measure. I struggled a bit with where to put my Libertos and ended up just putting it covering the beacon with its mine and the approach with its shotgun. It was a bit of a mess, if I’m honest.

I had no good place for Mary, Zoe, or the Interventor, so I just sort of strung them out and hoped for the best. The Heckler was easy, I just put him covering the beacon with his Jammer, although I would come to regret not putting him on the center part of the catwalk between the two Comanche octagons. It turned out he was barely visible to the center landing pad. Ah well.

The Morlocks were even harder to deploy. I didn’t want to get them shot off the table in their first impetuous move by the Haidao through smoke, so I decided to just scatter them around the beacon to bubble wrap it a little in case Dan went all in on the first turn. This way the central landing pad also screened them from the Haidao on their first move. I put the Kriza way up on the mountain. I knew it was a bad idea with the Liu Xing waiting in a dropship, but I wanted to do something silly–and if Dan didn’t respond it was going to be pretty rough for him with the Kriza up there. I think I should start running a Prowler Spitfire again–it would clean house on this table.

Time for reserves. Dan put a Mowang down covering the Moran on the right. Boo. Well, there goes that order. I responded by putting my Krakot on the same side as the Mowang, since I had Predator as my classified, and if anyone was going to chew through three wounds of Mowang it would be the Krakot. Dan nominated his Mech Engineer as his DataTracker, and then I named Zoe as mine… because… reasons?

As predicted, Dan starts things off by hitting the Moran 4 times with a Red Fury using one of the Daoying’s Lt orders. Needless to say, I don’t survive, but I do drop off the Koalas to force Dan to deal with them.

The second Lt order is used taking out the Koala the Mowang can see, and then it’s on to other things. As I predicted, the Liu Xing comes onto the table near the Kriza.

In retrospect, the odds of survival against the Liu Xing aren’t great, but if it’s stuck up on the mountain with only a boarding shotgun it’s not terribly relevant to the rest of the game…

But Dan actually throws his Hac Tao into the mix, an easy feat because it was hiding on top of the mountain. After walking it forward with its hidden deployment order, he coordinates an order between the Hac Tao and the Liu Xing to shoot my Kriza. The Mowang takes part to, mainly to get some movement.

The Hac Tao surprise shots my poor Kriza, hitting on two 10’s from outside of 16″. I dodge, beating the Liu Xing’s shotgun shot and pass two ARM saves.

Dan throws the Liu Xing directly at the Kriza and I shoot back, canceling one of his hits and tanking the ARM save. Dan tells me to “STOP DOING THAT!”

It works, because his Hac Tao crits on another coordinated order.

It’s at this point that I realize Mary was in position to hack the Liu Xing over the last order or two, so Dan gives me a free roll on Oblivion, which I fail. Dan finishes off his turn by clearing both Koalas on the left, one by shooting it with the Hac Tao and the second by face tanking it with the Hac Tao.

He throws the Mowang, Mech-Engineer, and Hac Tao into suppression and passes the turn.

I inform Dan (to his surprise) that I’m in loss of lieutenant and start my recovery turn. First I set up smoke for my Moran on the left with a Morlock’s impetuous order, sacrificing it to the Hac Tao in suppression.

I spend the remaining Moran’s irregular order to move into the Morlock’s smoke on the left, putting Mary into repeater range of the Hac Tao. She shuffles up the hill and it takes her order and the Krakot’s veteran regular order to put the Hac Tao down, even needing a crit Lightning roll against the Hac Tao’s

I decide I can’t leave the Liu Xing up there to cause trouble, so I use the Heckler’s order to climb Mary up and over onto the mountain and zapper the Liu Xing.

Dan rolls two 15s against the zapper and I roll a 18 on my BSG armor save. I don’t want to blow all my command tokens trying this, so I focus on doing something else with the command tokens. With careful use of smoke and more command tokens, I manage to get a +3 PH Morlock into base to base with the Mowang, leveraging stealth to not provide an ARO.

Dan starts off by dropping Mary, but this time the Zapper works, just barely. Dan rolls a 11, which makes it a 13 thanks to his BTS3 against the zapper. Phew!

With most of his options tied up or dead, Dan sends in the link. As they move forward, the Haidao gets in range of my Spetkr, so I reveal to attempt an Oblivion and whiff horribly.

The link scurries away from the Spektr, resetting on the way, and I whiff the face to face again. Ugh.

On their way out of the Spektr’s Zone of Control, however, Dan spots a sliver of my Heckler’s base, so the Haidao discovers it…

and pastes my poor Heckler befor the link retreats. Dan wisely doesn’t waste orders getting his Mowang into trouble, making me do it on my turn.

My Morlock beats down the Mowang handily, doing a wound and hitting it with IMM-2 and Isolation. E/M CCWs are the best!

I settle the other Morlock into a slightly better position and then send in the Spektr to do some damage. Dan had retreated all the way back so I start pie slicing. It takes 2-3 orders but I finally manage to drop the missile bot.

I retreat the Spektr instead of recamoing it, which was a huge mistake…

becaues Dan’s Daoying shotguns it down.

Dan counts his orders and decides he can’t get my beacon, so he tries to make it impossible for me to, taking out a Morlock and then throwing everything into suppression.

The Haidao is watching the beacon, so I can’t smoke my way there, and my classified is Predator. I kill the Mowang finally with the Morlock, and then make an attempt to get acros sthe table with the Krakot. Sadly, I didn’t roll one of the movement modes and I don’t have enough movement to get into base to base, so I settle for some chain rifle action instead, making it a

This was a pretty rough game for both of us. I did a very reasonable job of recovering from the bad start, but I think I lost the game in deployment:

The rest of my forces were mostly fine. Perhaps the Krakot should’ve been more centrally located, but I think having him go Mowang hunting if necessary was a good idea.

I think Dan played a very safe, cagey game. He actually went for his classified but didn’t manage to accomplish it due to those silly veteran/elite troop types and everyone not knowing what’s what.

Very happy with the Spektr, not with his dice but with the capabilities he gives me. I think I need to work him into my vanilla Nomads play more in general. I’m definitely rusty with vanilla Nomads now, after having taken a long, meandering route through all my other factions. I think the the first thing to go is definitely deployment strategy, as evidenced here. I definitely missed my Nomads though.

Perhaps I was a little under-gunned this game. I think I need to start thinking about some weirder options out of Nomads for my gunfighting… To sum things up, I think I did a fine job of defending my beacon. I drained a ton of orders from Dan and took out his elite options early on, forcing him to lug a link around. Because he was constantly running his link forward and back, that gave me even more breathing space as well.

However, with the Spektr down, my only real dedicated gunfighter dead, and the MSV2 preventing smoke, I didn’t have a good option getting to the beacon. I had White Noise, but no convenient repeaters. I think the thing to do next time is take the DepRep+E/Mauler Spektr to get me some more convenient white noise sources and HI attack vectors.

I think Dan made the right call forcing a draw. I probably would’ve been able to attack his link with something nasty and neutralize at least the Haidao, which is all I needed to get to the beacon on turn 3 with some smoke from a Morlock. I overextended in deployment, Dan overextended on turn 1, and we just fought ourselves into a stalemate. Nevertheless, a great return game to Nomads for me, and Dan got some good lessons for his Krug prep! 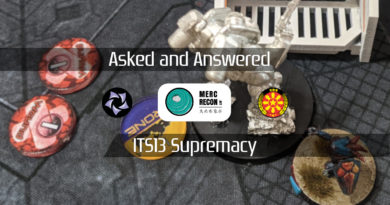 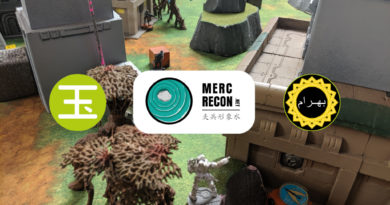