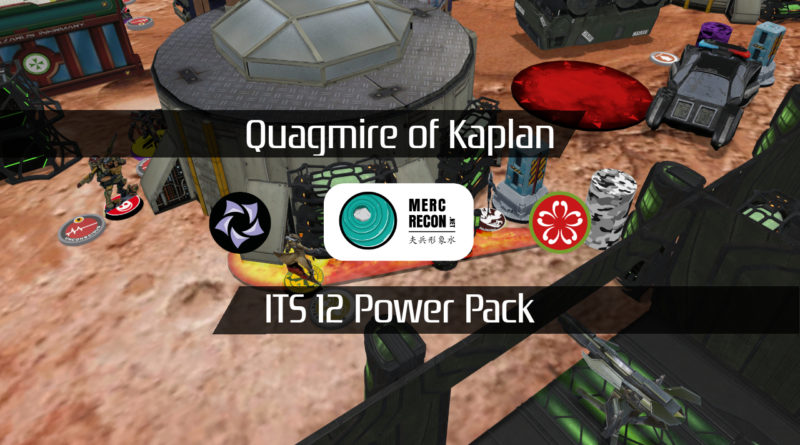 I had a few hours in the morning so I challenged Tony (zhukov2) to a game. We’re really doubling down on practicing Power Pack, so here’s yet another game of Power Pack! We played this very strange map which is AWFUL for power pack in terms of deployment zones, but we managed.

After all the talking with Reuben we did about Combined Army on the latest episode of Late Night Wargames, I decided that I wanted to try my hand at Combined again.

I had a bit of a struggle putting together a list. I decided to try and have access to the missile trick as well as having access to AD and other such things.

It meant that I had kind of a meh lieutenant by modern Combined standards, but I was pretty happy with the rest of my stuff. I also wanted to try out that the Dropsuit Taryot, because who doesn’t love a Protoss Morat Dragoon that explodes on arrival? Tony’s been iterating on his QK list, and took two Al’Hawwa and a bunch of Kaplan to try out a different list.

We both rolled 16s, which were failures. Then, I rolled a 1 and Tony a 2. As we observed then, that would come to define the game! I put Shrouded and Malignos on each of the objectives and covered my console with a Caliban (which I now think was a mistake). The T- and Q-Drones went on the right, and I put the E-Drone and Nexus on the left. The Imetrons just hung out, and I tried to protect things with the Ikadrons. There really weren’t very many good places to put the Ikadrons–or anything really, but I did my best.

Tony castled up his Kaplan Haris with Wild Bill on the left, with Lelia right behind them. I thought this was very suspicious and I thought it might’ve been Tony’s Hafza Lieutenant. The link went on the right, with Tony’s favorite Bashi as Warcor trick and a Yuan Yuan deployed there for smoke. One Al’Hawwa went down, and then it was time for reserves.

I deployed my Speculo right next to the Hafza, and then Tony put down the other Al’Hawwa on his left.

I moved behind “Leila,” who revealed herself to be a Hafza and dodged. The Speculo had no trouble removing Leila with a burst of combi-rifle fire, but Bill whipped around to face the so-called “combat accountant!”

3 on 15s versus 2 on 16s isn’t terribly good odds, and I lost the Speculo to a statistically average DA round from Bill’s 6-shooters. I think the BSG Speculo would have given me some more options, honestly… not entirely sure. Anyway. I took out a very obvious lieutenant option, the other being something in the 5-man link. With my options gone on Tony’s left, I turned my attention to his other link.

I throw up the combat jump assist on the E-Drone and land the Dropsuit Taryot right on top of Tony’s “Warcor,” obliterating the Bashi that it really was. I shotgunned the Yuan Yuan in the back from around 9″, so I only hit once and of course the Yuan Yuan passed its ARM save.

It turned around, which meant I had to commit to something and get chain rifled while doing it, so I decided to whip around the corner and template Rouhani and the Djanbazan HMG. I managed to take out the Djanbazan HMG and do a wound to Rouhani, but the return fire from the Odalisque MULTI Pistol, Rouhani’s SMG, and the Yuan Yuan’s chain rifle wiped out the Dropsuit. Probably should’ve gone after the Djanbazan Lieutenant option… and as I’m thinking about this what I should’ve done was:

Instead what I did was commit to getting a Shrouded closer to try and spotlight the link. I attempted a WIP roll on an antenna but that failed spectacularly, and then I just committed. I didn’t have a strong plan, so I committed to the missile thing and rolled a bust.

I had an order left in the second group, so I pushed the T-Drone up and the Q-Drone out to try and take out the Kaplan Spitfire, who successfully dodged.

Tony started by dropping in a Yuan Yuan right on top of the T-Drone, so I dodged prone and away.

The other Yuan Yuan came in near my Q-Drone.

The Yuan Yuan that the Dropsuit failed to kill moved up with its impetuous order, but I failed to Spotlight it.

Tony sends in the other Yuan Yuan. I whiff all my shots within 8″, and then tank the chain rifle.

Thankfully, the next round has me take out the Yuan Yuan, but the Q-Drone goes down.

I try to trade the Yuan Yuan with the Shrouded, but this one rolled a Light Flamethrower. I hit the Yuan Yuan, it tanks ARM, and then my Shrouded gets burned off the table.

Tonny advances both links and then tries to discover my remaining Shrouded with his Sekban and fails.

I open up with the Malignos’s SMG against Wild Bill, killing him. The Kaplan whiffs its shot and tanks the mine.

I then spend entirely too many orders trying to kill this one stupid Kaplan.

I do an out and back to get the Kaplan out of cover… and it doesn’t work.

I even pick up the Q-Drone to have a go.

The Q-Drone fails as well.

Finally I get a Ikadron there, spotlight the Kaplan with my Nexus, and drop a missile down on the Kaplan to seal the deal.

The Malignos easily KOs the Al’Hawwa with Trinity, and then my turn is over.

The surviving Yuan Yuan throws all kinds of smoke…

Which sets up the Djanbazan Lt to discover and take out my remaining Shrouded through the smoke while my Ikadron takes free pistol shots at the Sekban as it moves up. With the Shrouded down, the Sekban turns its attention to the Ikadron and gets flash pulsed for its trouble.

Tony notices that the Q-Drone is still up so he shoots it off the table with the Djanbazan while the poor Ikadron keeps taking pistol shots at the Sekban and missing.

I bring on a Cube Jager and shoot Rouhani in the butt. He beats me on his stupid WIP 15 flash pulse thanks to Six Sense, so that’s useless.

I get an Ikadron into view of the Al’Hawwa and remaining Kaplan and fail to flamethrower either of them. I attempt another spotlight, but fail, and then I waste a few more orders trying that. This leaves me barely enough orders to defend the antennas, because I AM BAD AT THIS GAME. I flip the rightmost antenna, and then try to take out Tony’s Lieutenant by shooting (and missing it) with a missile, and then again with an E-Drone.

Rouhani’s standing right next to the antenna and spends three orders trying to flip it while I shoot at him with the Cube Jager’s E/Mitter, the E-Drone, and the Ikadron’s flash pulse. Rouhani just keeps tanking saves and flubbing his WIP roll until I finally get him with the E/Mitter on the last order, but it’s too late. He flipped the antenna. The Yuan Yuan takes out the Ikadron I have watching the Al’Hawwa, it recamos, and flips the last antenna for the win.

With that, it’s a

Let’s break it down by turn. I think that would be a good way to think about it at first.

The Caliban was too conservatively deployed, which was pretty damn annoying.

The Speculo and Dropsuit could’ve been slightly better piloted, but they both got a reasonable amount of work done. Taking out a Hafza, a Bashi, and a Djanbazan is good but not great. Where it went really wrong was wasting the Shrouded. I could’ve placed mines and aggressively gone after the link, maybe even shot up that Yuan Yuan that caused all the problems. I had maybe 3-4 orders of camo trooper doing things that I squandered on spotlight, even though I knew it felt bad and I should’ve stopped.

The other thing is that I needed to spend the time to flip the antenna instead of just walking off. This was definitely a problem with my prioritization. I should’ve focused on soft reduction of orders without interacting with Tony’s stuff at all. That’s the key to success here, get as much accomplished as possible without forcing rolls. It’s just like Blood Bowl!

This actually went kind of okay, aside from it taking freaking forever to deal with that Kaplan. I think I should’ve brought the Ikadron into play much sooner, but oh well. Still learning the Combined Army. I over-invested in trying to kill the Kaplan for sure, and should’ve spent some time dealing with other things. Probably got too excited about using the Malignos.

Here’s where it all went to shit. I think I had an opportunity to kill at least one specialist–i.e. the Al’Hawwa, and push some buttons. I also think that I could’ve done some work on taking out the Yuan Yuan, and maybe even gone after the Djanbazan lieutenant with the Malignos. That would’ve sorted the game for me, probably.

Ah well. Tony did a great job. This all basically boils down to going second being very powerful in Power Pack, and me not doing enough to disrupt his plan while advancing my own. I think the plan for going first in Power Pack should look something like this:

I think I should’ve been far more aggressive in taking out Tony’s specialists. I knew in my heart of hearts that Leila was a Hafza, and shouldn’t have gotten greedy and tried to take out a possible Lieutenant. Instead, I could’ve gone after Rouhani very aggressively in close combat with the Speculo, and then used the Ikadrons to intuitive attack the Al’Hawwa, or better yet the Caliban, and then eat them to get some extra wounds.

I could still have done the Dropsuit thing to take out some link members and the Bashi, and that would’ve put Tony in a much worse position. The Wild Bill/Kaplan link is a good killy link. It can take ground but not hold it terribly well, and most of my stuff was pretty far away from it anyway. One other option I had and didn’t think about would have been to walk on a Cube Jager behind Bill and just shoot him off the table with the SMG during Turn 2. That would’ve freed up the Malignos to get some objectives and set up some mines and such.

I don’t know why, I just haven’t really made mines a part of my thought process in a long while. I think it’s because I’ve spent a lot of time fighting Libertos now, who clear mines with ease, and so I’ve just made them less a part of my plan. That needs to change–not everyone can even bring a Libertos, and there are plenty of ways to threaten non-Libertos things.

Just thinking about the massive difference in this game if I had pushed the Shrouded up on the first turn, laid a mine covering the link, and shot the Yuan Yuan… I’m so disappointed in myself! Anyway. I’ve learned a lot from this game, as I always do when I play Tony. We do some discussion after the game, which you can find in the fast-forwarded video below, but I think I should’ve just played all three turns pretty differently now that I’ve (literally) slept on it.

Anyway, thanks for reading/watching. I hope to get some non-Power Pack games in soon, haha! 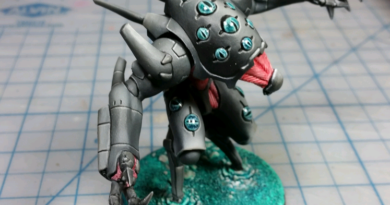 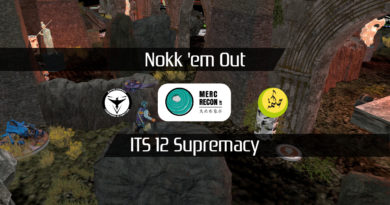 2 thoughts on “Quagmire of Kaplan”