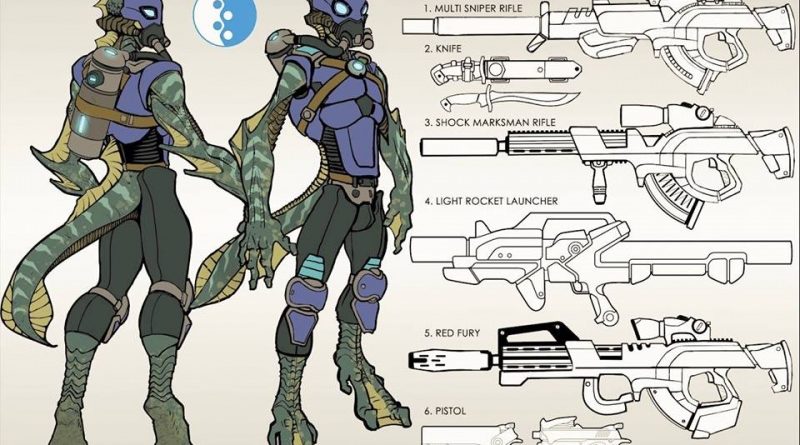 It feels like forever since I last played Isaac, and he’s playing Varuna now so I knew I’d be in for a challenge! I’m still thinking about Ikari these days, and have been tweaking my high order list to better fit the requirements for objective room missions. I was pretty excited to try it out, and Isaac was all too happy to play one of his VIRD monstrosities.

Isaac won the roll off and decided to go first. He brought a Patsy, Machinist, and Kamau HMG Haris and a Fusilier Core with two Kamau heavy weapons, the HRL and the MSR. The Fusiliers went on the left and Patsy’s Haris went on the right, clustered up behind some cover. Isaac always brings Fugazi, even when he plays Onyx, haha, so a pair went down on roofs and catwalks, one on each side. He added a pair of Zulu Cobra, both on the right to support the Haris, and then put a Helot LRL on either side of the table. 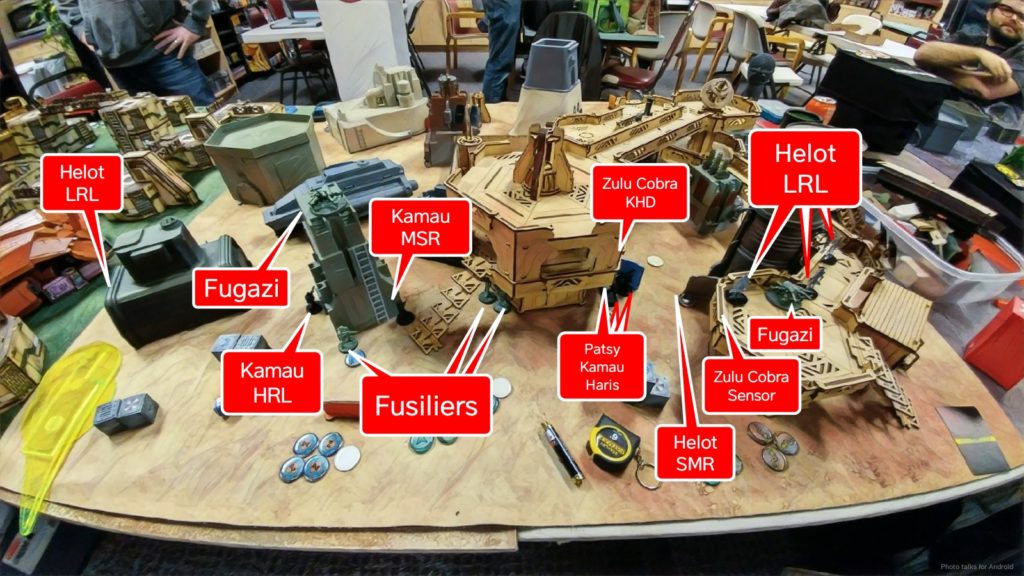 The one on the left went down in limited camo, and one on the right went down on in Decoy mode, but it was pretty obvious which one was the real one to me… it was the one that could see stuff! The last Helot was a shock marksman Helot, and it hung out near the Zulu Cobra Sensor on the right. After that, it was my turn to deploy.

With the Haris clustered up, it almost demanded me placing my Tanko ML covering their approach. I was sure that Isaac wouldn’t give me a free missile shot on three expensive models, but I wanted to force him to waste orders and movement spreading them out. That meant my core link went on the left to cover the Haris, which is under the far catwalk on the left of this picture. 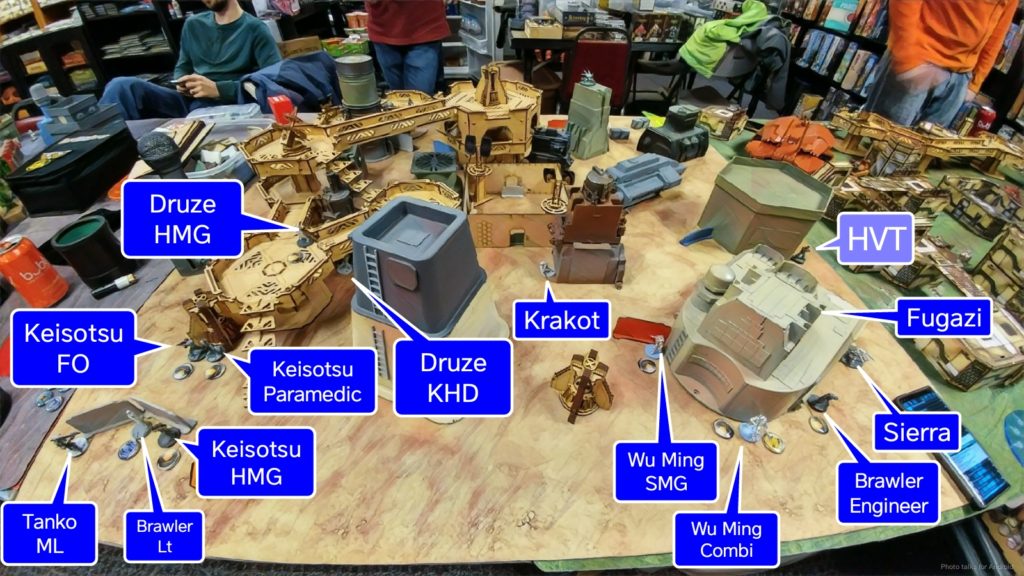 My Wu Ming Haris went on the right, with my Brawler supporting the Sierra and Fugazi. My Druze and Krakot were poised to make a play for the Armory, and I held my Bashi in reserve. Isaac forgot to hold something in reserve, but was happy with his deployment. I shooed him away to feint a Ninja, and then decided to bring my Bashi on the same side as Patsy. I drew Extreme Prejudice as my hard mode classified.

Isaac started things off by spending his Lt order on Patsy to throw Nimbus Plus grenades and spread out his Haris. After sneaking his shock marksman Helot out of a missile template, Isaac moves his Zulu Cobra sensor into view of my Tanko. Thankfully, it had to be out of cover to do so. I delay, and Isaac just throws away the second short skill… because…

he Triangulated Fires me through the Nimbus Plus zone! 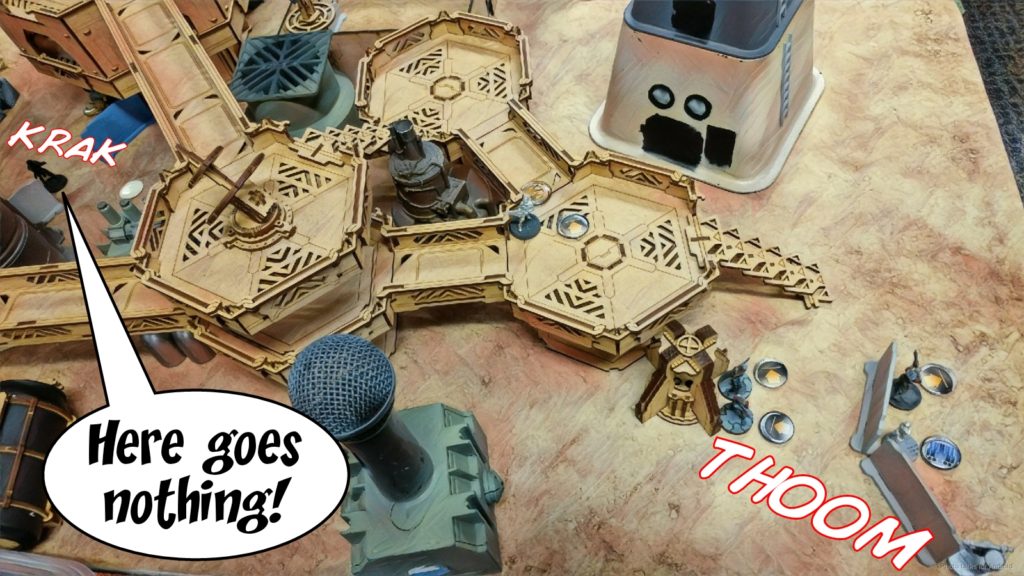 We forget about the Saturation Zone part, but we both roll like rubbish anyway. The key point here is my three beats everything, and the missile does the rest. 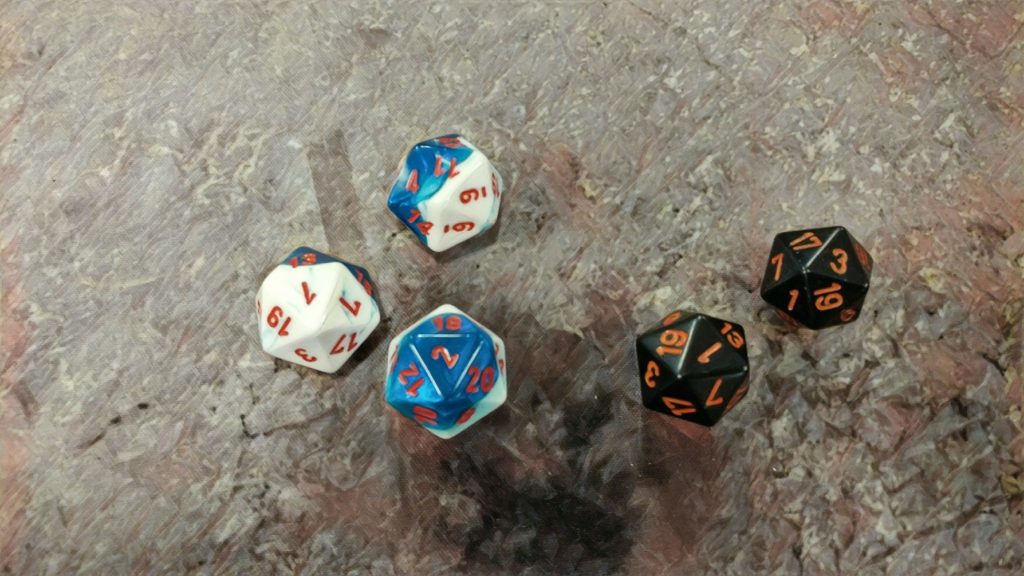 The Fusilier link starts moving, trading much sniper rifle fire with my Fugazi and my Sierra. 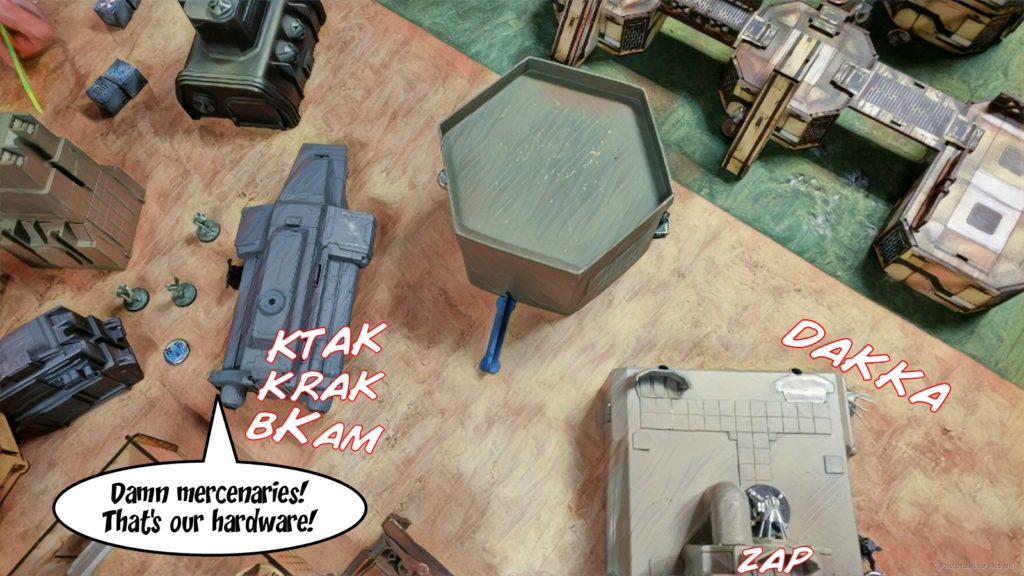 Isaac forgot to pie slice on the first order, so he did it on the second to take out my Fugazi, actually blasting it off the table with DA ammo from the MSR. 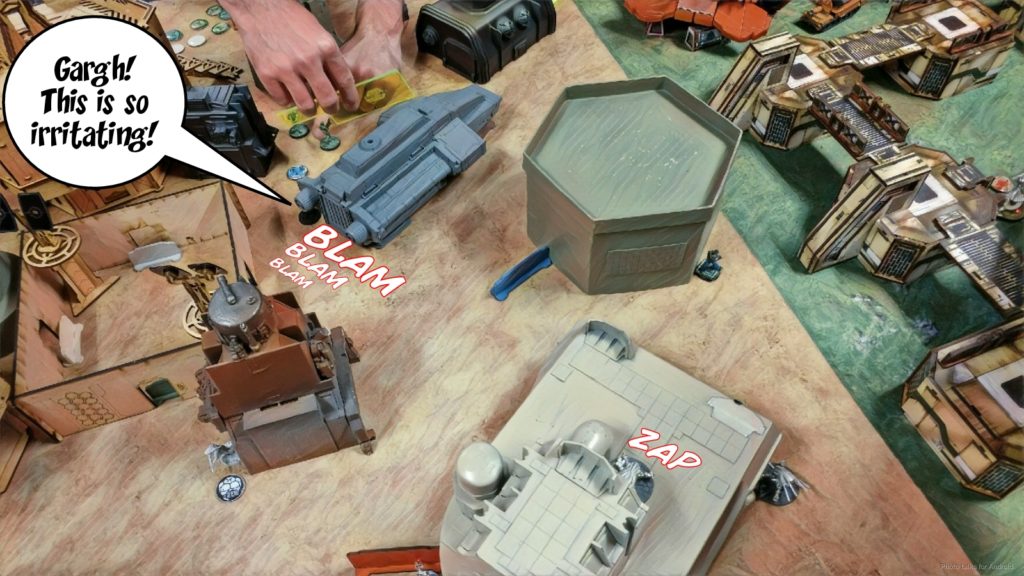 It takes him something like two orders to get the Sierra down, but he does manage to knock it out. 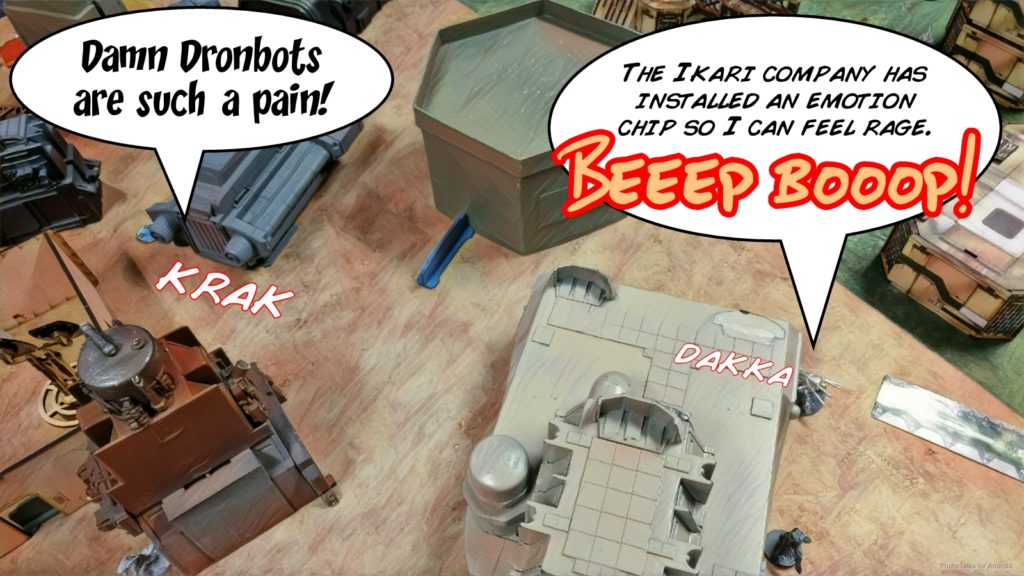 Isaac shifts up the Helot on my right to support his link, and then passes the turn.

I cancel my Krakot’s order, then blow up the door on my side with my Tanko. 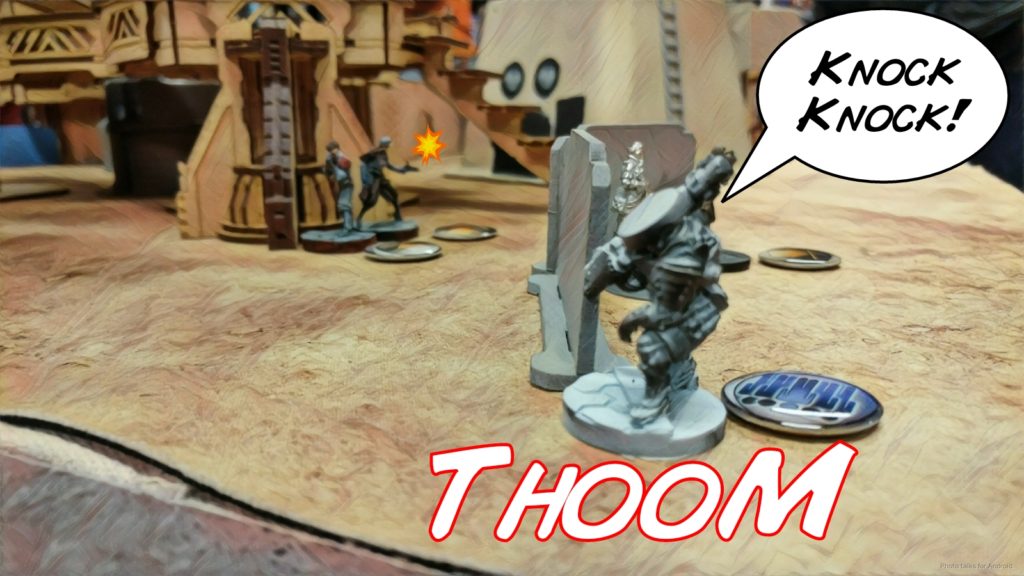 The Krakot goes into the Armory, and I open the door near the link with the Tanko’s missiles… 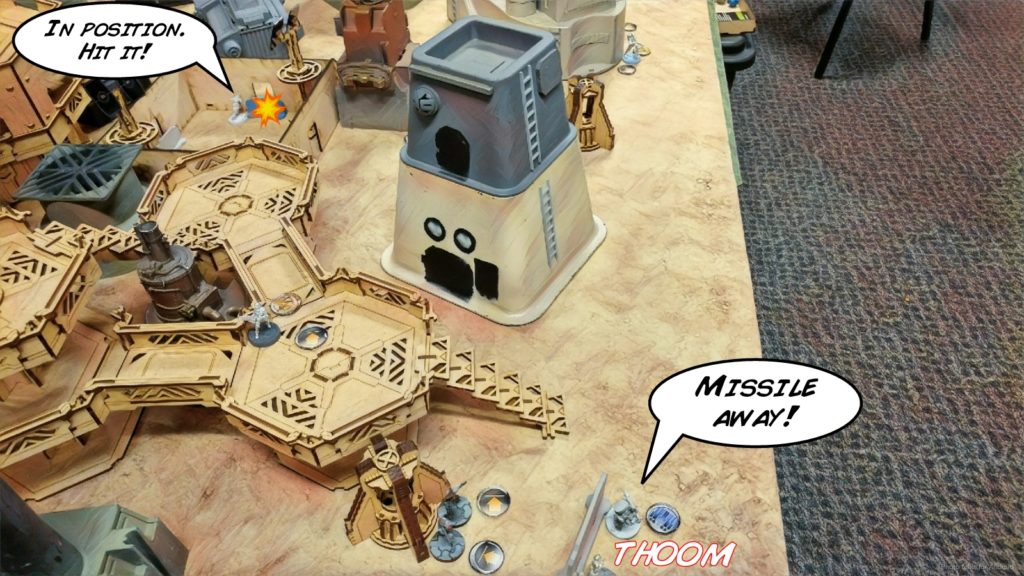 which lets me get the Krakot into chain rifle range of 4/5 members of the Fusilier link, with the Kamau HRL on the other side of the spaceship. Isaac breaks the link, dodging the Fusiliers and having the Kamau MSR take a pistol shot. I decide to contest everything with a grenade throw, since I rolled PH+3. Sadly, Isaac crits with a 16 and I roll a 17. BAH! 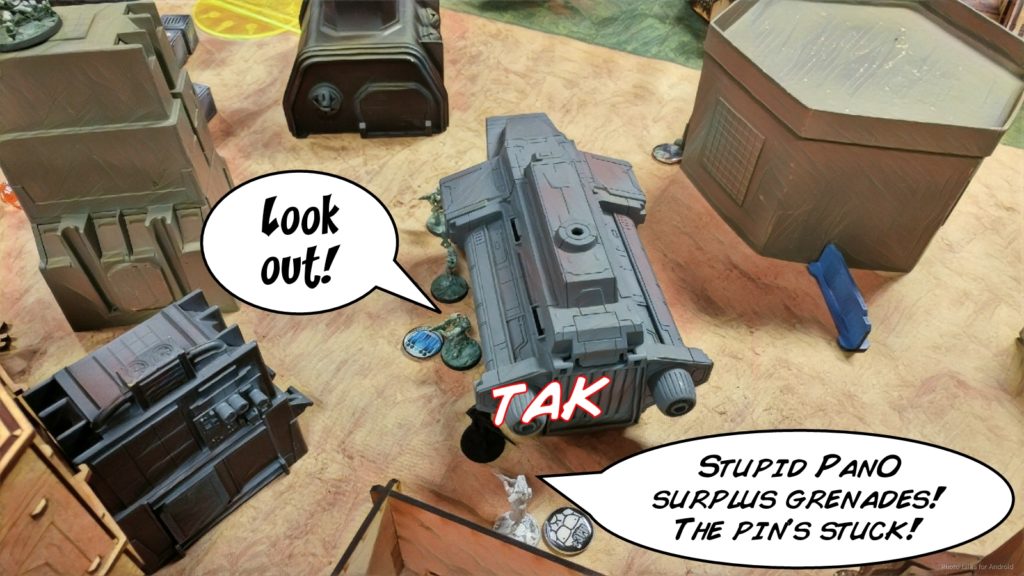 I need to work on getting stuff into the armory, and I’ve used a few orders from my second pool to power the Krakot already… so I try with the Druze. The HMG guns down the obvious LRL Helot, tanking a flash pulse to the face. 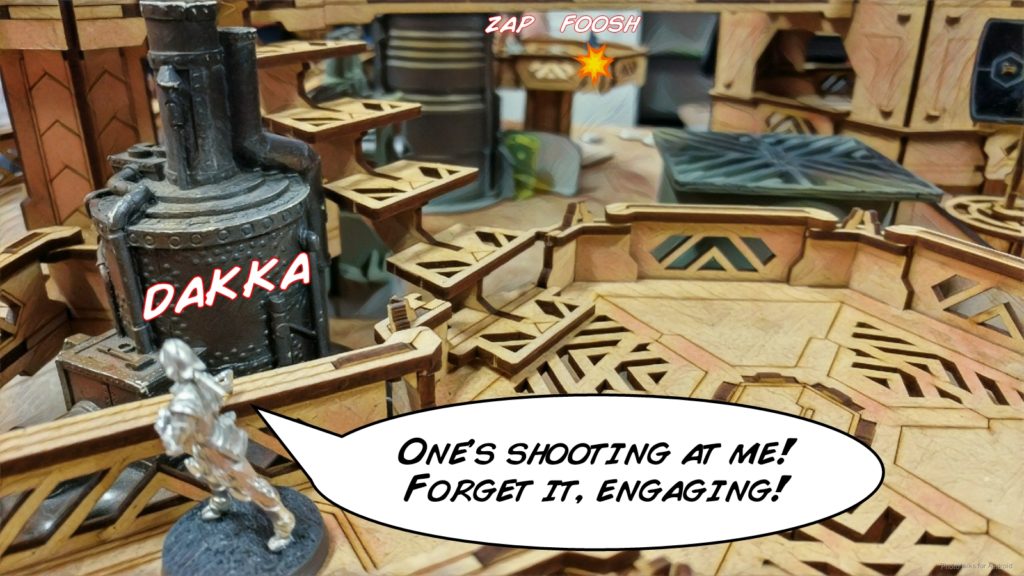 I then cautious move both Druze, getting the KHD to safety and dropping prone with the Druze HMG, tanking yet another flash pulse in the process. 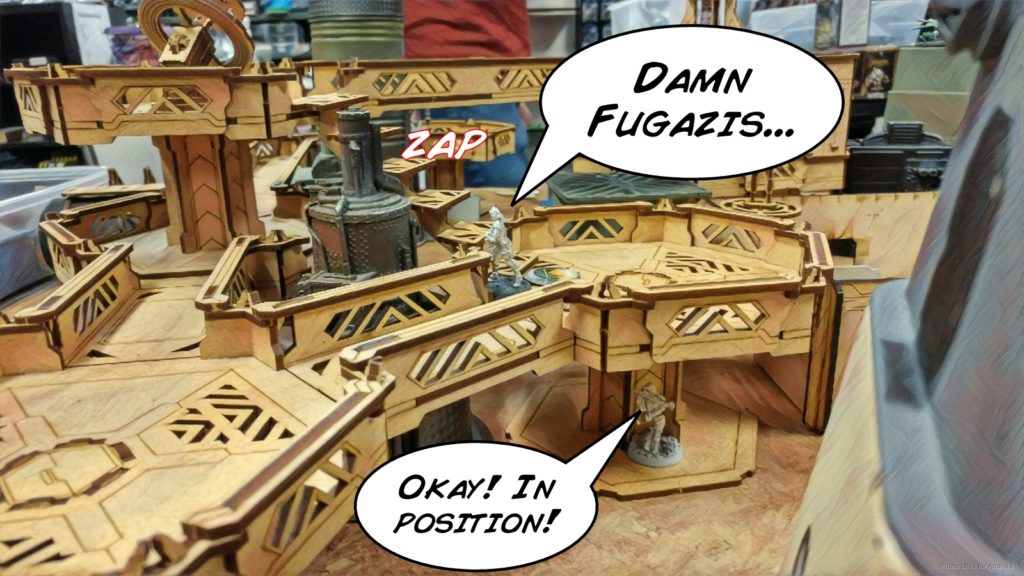 I’ve got a few orders left in my first pool, so I bring on my Bashi, drop an E/Mauler covering Patsy’s advance… 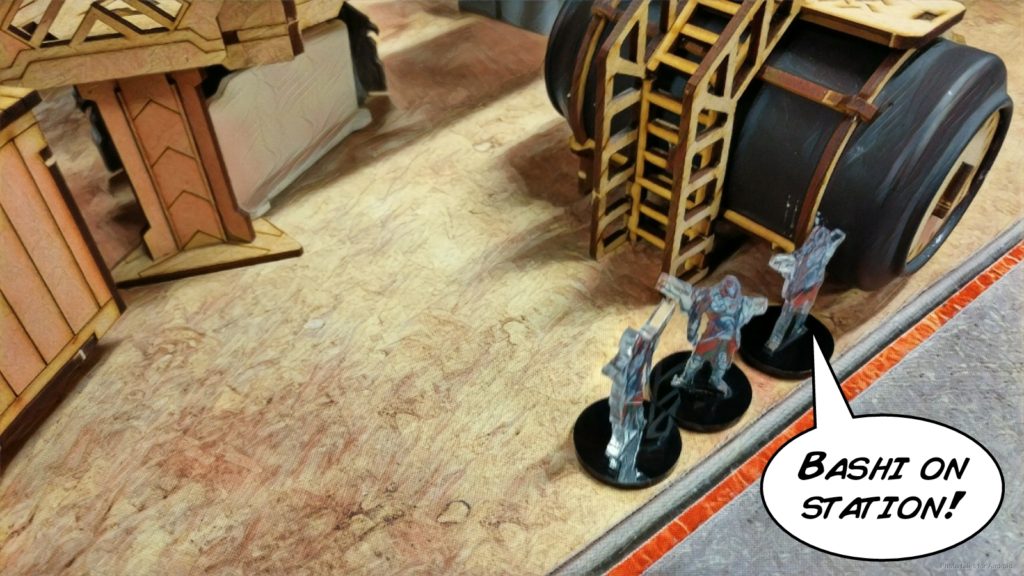 and go into suppression, doing the holoecho trick to cover Patsy’s Haris with suppressive fire. 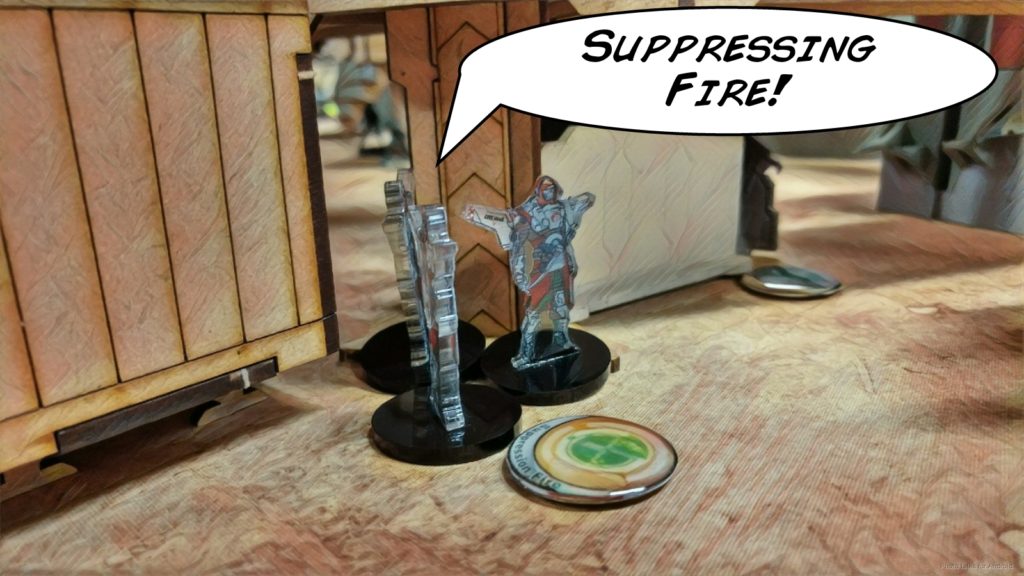 My last orders in the second group are spent picking up the Sierra with my Brawler engineer. I had to spend a command token for a re-roll, but it’s well worth it.

Isaac elects to forfeit a Fugazi’s flash pulse, since I tell him I’m just picking up the ‘bot and won’t attack him.

In a shocking turn of events for me, Isaac’s in Loss of Lieutenant. Turns out his Zulu Cobra Sensor was his Lieutenant, and my Tanko shut it down. Isaac brings in an Echo Bravo Paramedic to handle my Bashi, which is definitely great news for me. All I wanted was order drain. 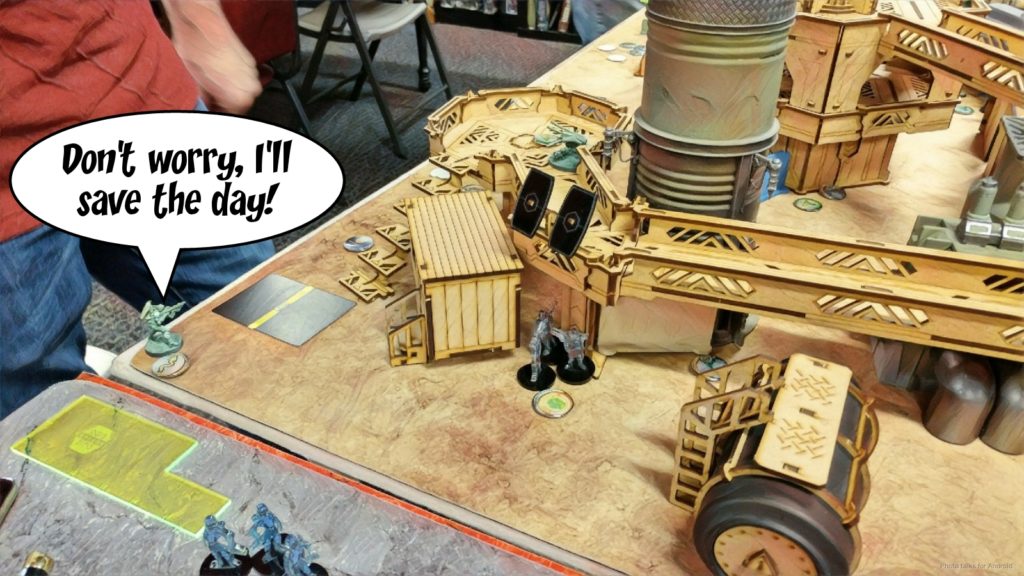 A command token and combi-burst in the back later, I’m down a Bashi but not feeling too bad about it. 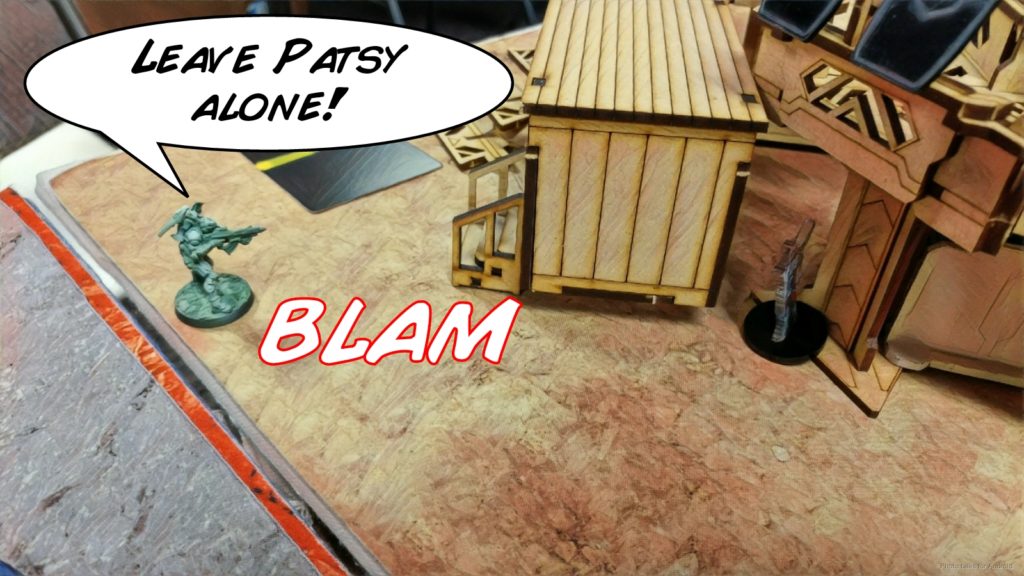 The Kamau MSR tries to take out my Sierra again but gets shot in the face instead. Thankfully for Isaac, she passes ARM and ducks back around the corner as the Kamau HRL advances around the spaceship to cover my Wu Ming’s approach. 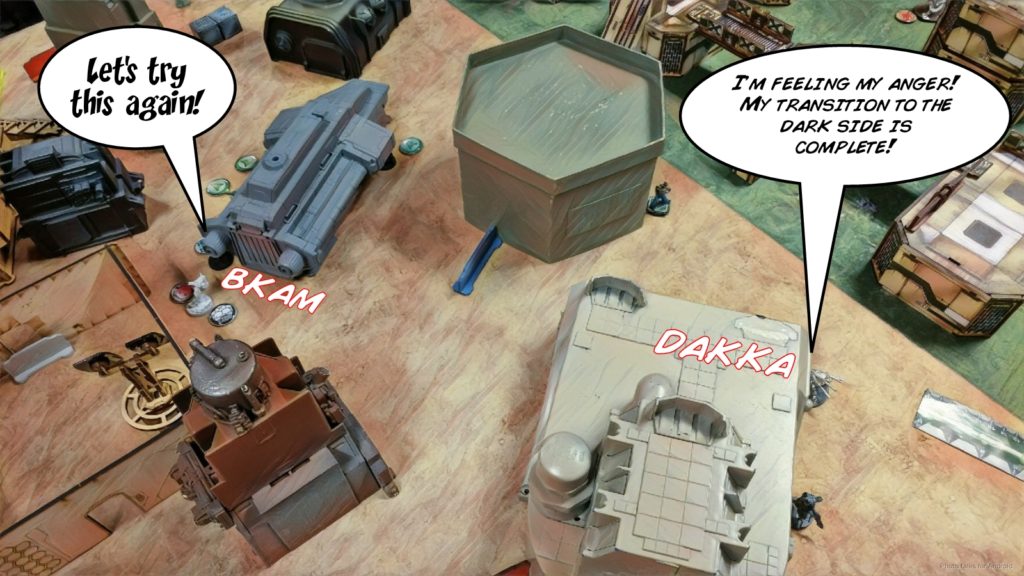 After moving his Zulu Cobra KHD near the Armory, Isaac decides to call it for the turn. He’s got more orders, which he forfeits due to not wanting to break his link by spending irregular orders.

I try to take out the remaining Helot on the left, the one with the Shock Marksman Rifle, with my Druze HMG and get crit off the table instead. 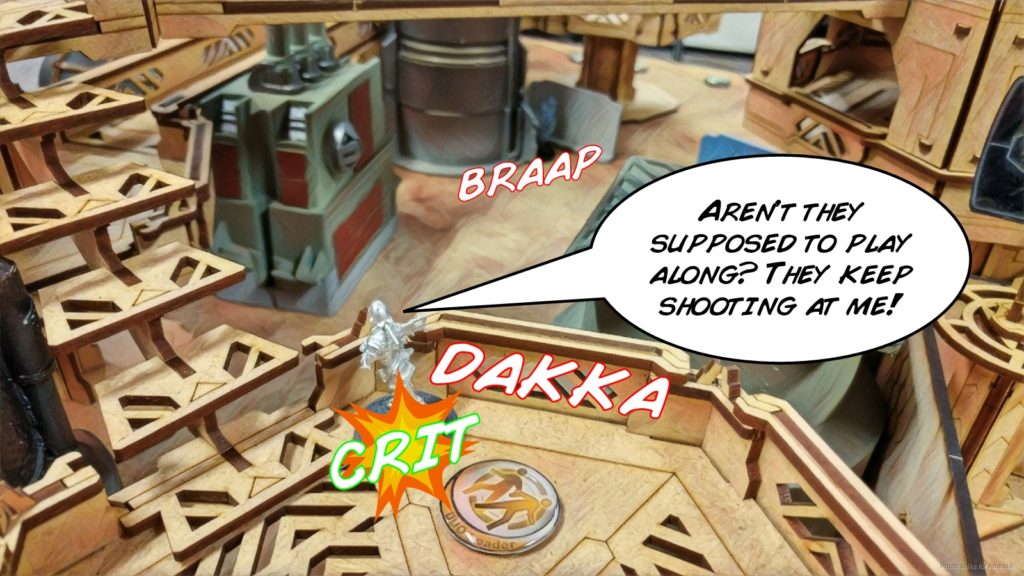 This does let me get my Druze KHD into the Armory, and I grab a chain rifle. I try to take out the link again, this time taking out only one Fusilier… 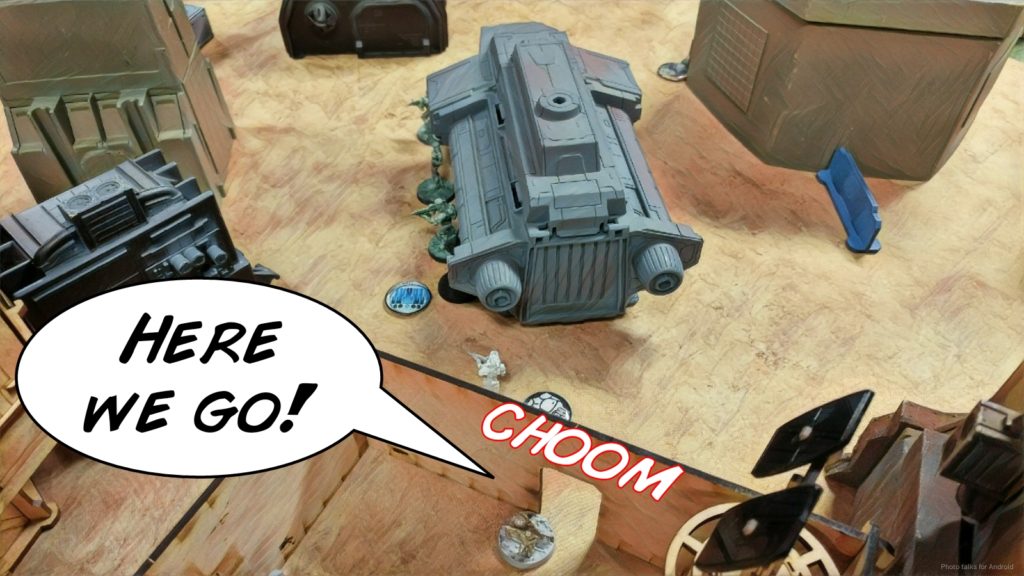 my Druze gets impatient and just blasts the Kamau MSR into unconsciousness with combi-rifle fire.

I retreat her into a corner, and then start working on my Wu Ming. My Wu Ming combi rifle takes out the Fugazi on the right, attempts to drop the HRL Kamau and fails, then I just cautious move the two Wu Ming across the gap watched by the Kamau HRL and the Helot LRL and stack up the chain rifle Wu Ming on the door.

Isaac realizes that my Druze KHD is a hacker, and we have a Redrum slap fight which the Zulu Cobra wins. 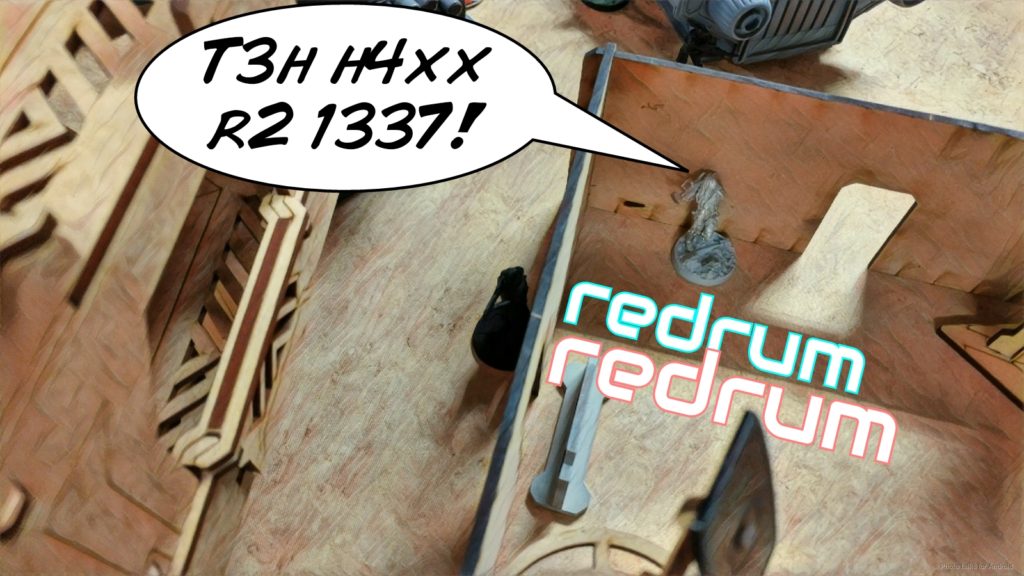 He sacrifices his Shock Marksman Helot to the E/Mauler after moving up his Fugazi to cover my link team. This is of course fine since he doesn’t need to do anything other than move 8″ in his turn, so a great use of the Helot. 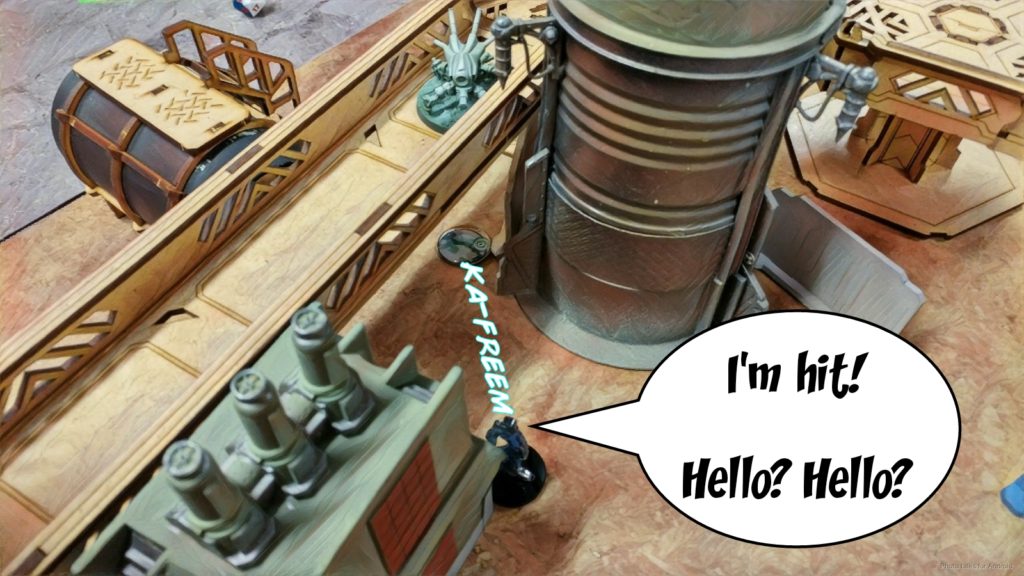 The Haris moves up, and the Zulu Cobra has an awful time getting the doors open, just hemorrhaging orders to try and push the button. The Haris ends with Patsy and the Machinst clustered up near a building and the Kamau HMG gunning down my Brawler Engineer, but not before I sneak the light shotgun template onto the Helot in the back, knocking it out.

Isaac dives the Zulu Cobra into the Armory, hoping to stay there, but my Wu Ming chain rifles him unconscious. 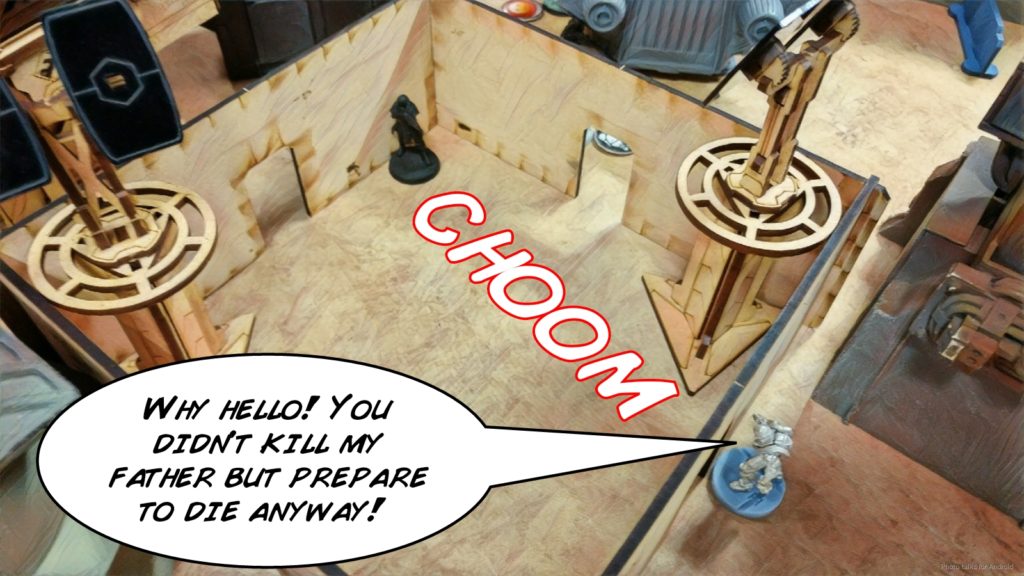 With all the doors open, Isaac’s got a Kamau HMG and a Helot LRL watching the center of the Armory, but it’s not enough to prevent me from getting into the building. He moves his Echo Bravo up to cover the left side of the Armory.

I want to reduce the Haris’s burst, so I fire some missiles at Patsy, hitting twice and blasting both her and the Machinist off the table. 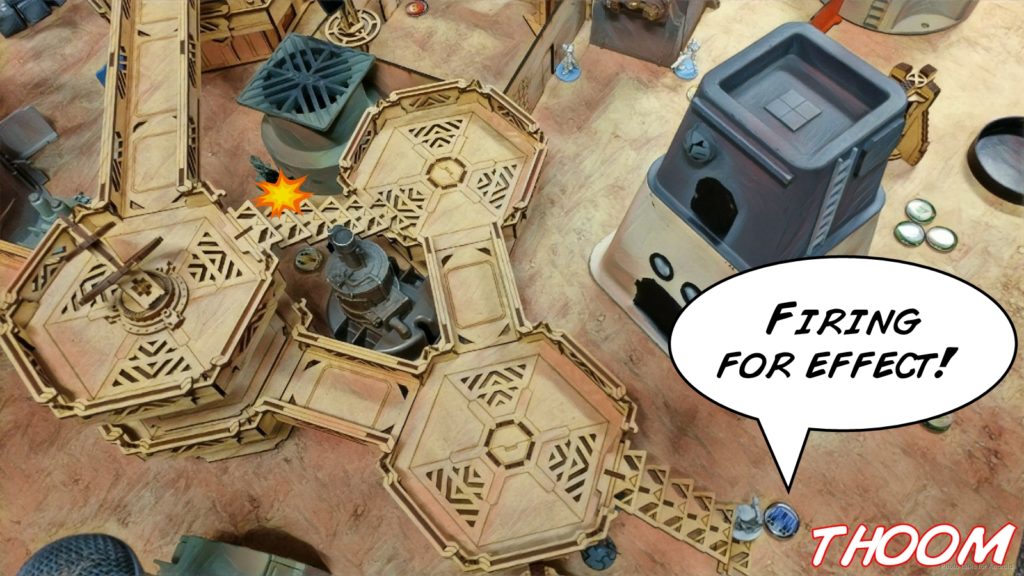 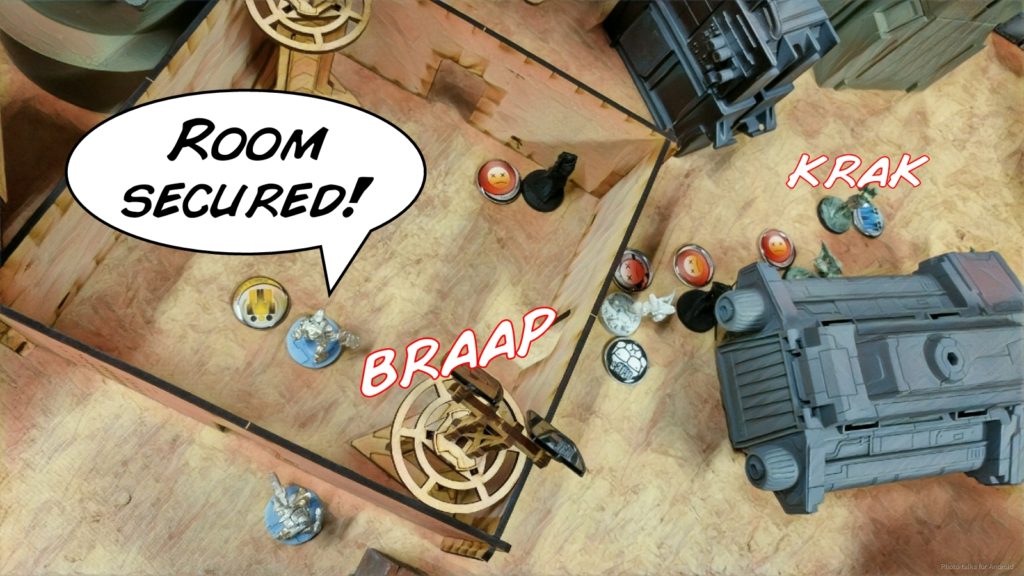 then I accomplish the first coup de gras for my Extreme Prejudice classified by dashing the Wu Ming chain rifle into base to base with the Zulu Cobra, moving the other Wu Ming into the building safely. 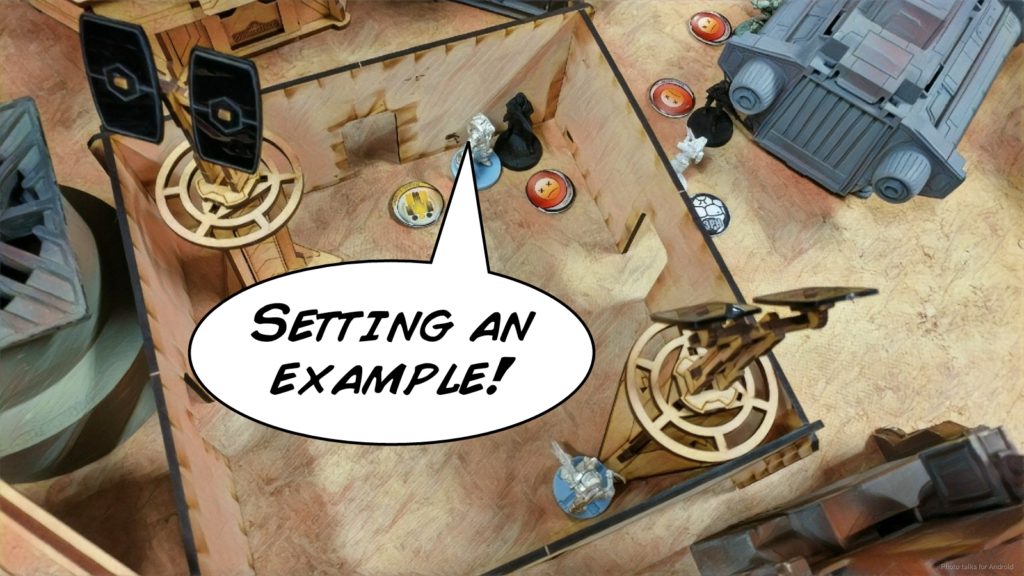 I bring on my Cube Jager behind the Echo Bravo and run into base to base with the downed Helot, finishing my classified. I’ve held the objective room for 2/3 turns, have more panoplies, and am in there at the end, making it a 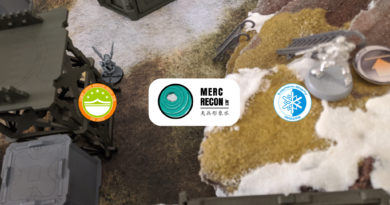 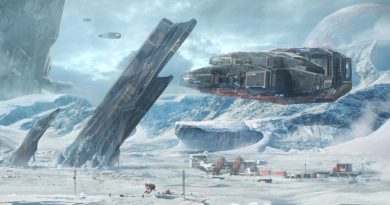