Isaac and I had been throwing lists back and forth all day for Annihilation, so course we ended up playing each other at game night! I didn’t know which list he had actually brought, so after I won the rolloff and chose to go first I was deploying essentially blind. I’m still working on the Uberfall, and to make points for everything, ended up having a ton of boarding shotguns in my list. They do a pretty good job of defending the deployment zone though, I suppose. My goal for the game: get the Uberfall to Isaac’s deployment zone and hopefully make back their points.

I won the rolloff and chose to go first, so Isaac made me deploy on the side with no cover in the back of the deployment zone. I put my Uberfall on the left, figuring that if I lost the Chimera to a stray ARO I could walk a Tomcat Engineer on and pick her up (yeah! she has STR. what). I put the Pupniks in the front, figuring they would absorb the AROs and kept the Chimera back because I know there are Fusilier MLs in Isaac’s list. The Reverend Healer with her BSG covered the backfield on the left from any sneaky Garuda that might want to show up. The right side of my field was covered by my Moira and Jaguar, which telegraphs to Isaac where my Intruder will go, of course. The Reverend Healer’s bot hung out near the Jaguar and the Moira. The rest of my troops were put in a knot nearby, with my Interventor ready to buff the TR bot and the Kriza ready to punch up the right flank.

Isaac bundled up his Fusilier link team in the center of his deployment zone. The Fusilier MSR lay prone to Isaac’s right of the platform in his deployment zone with the Fusilier ML hanging out on the cream colored building nearby. His two regular Fusiliers (one of which was his Lt) castled up at the base of the platform with , protected by a Pathfinder and Auxilia FO. The Fusilier FO was at the second level of the cream-colored building along with the Trauma Doc and a Fugazi. The far left of deployment was covered by a pair of Fugazis, Isaac’s EVO hacker, and his Machinist. Astute observers will note that Isaac has weighted his deployment heavily to his left, away from my Uberfall. He spent a fair amount of his deployment thinking about how to counter them, which I guess more than makes them worth their points. There’s a Hexa KHD lurking by the base of the shipping containers too, which you can see in the post-reserves photo–Isaac had just forgotten to deploy it when I took the photo here.

My Intruder HMG comes out of reserve onto a rooftop looking straight at Isaac’s MSR. It’s actually not a bad spot–the board geometry blocks the ML and the Auxilia, so I can isolate the MSR just by positioning, i.e. I don’t need the Jaguar’s smoke at all.

Of course, Isaac’s brought his Squalo list. He plunks down the giant TAG behind a building in total cover and dares me to come dig it out.

Isaac starts things off by spending a command token and throwing up Overclock on his EVO Hacker.

Looks like I’ve judged things correctly and the Uberfall make it their first 6″ without incident. The Chimera throws some smoke just because I don’t want to move them into LoF, and who knows if it’ll be relevant later. I set about dismantling Isaac’s link team. The Intruder takes a shot at the MSR Fusilier, who promptly knocks my poor Intruder onto his butt, unconscious. I buff the TR bot and move him up to try again, but he’s knocked out too! Isaac has been lamenting his cold dice for awhile now, so he made a point of showing me that he changed dice at the start of the game. Looks like it’s working for him! I’m now down two attack pieces.

I throw smoke with the Jaguar to cover the downed Intruder and bring in a Tomcat. I spend a few coordinated orders to gun down a pair of Fugazi with the Kriza, shuffle things around and get the Tomcat into base to base with the TR bot. Full Auto really makes making the Kriza a spearhead in coordinated orders viable–just have him shoot at not scary stuff like flash pulse bots as you move all your guys around. Talk about efficiency! I don’t have enough orders to pick up both the Intruder and the TR bot, so I settle for picking up the TR bot and leaving the Doctor’s bot next to the Intruder for next turn with the Uberfall’s irregular order.

Isaac starts his turn by trying to remove some more attack pieces. His Pathfinder attempts to sat-lock my Spektr, but he fails WIP and I make my reset. I’m revealed but at least not targeted. The Squalo starts lobbing grenades, catching my Moira and Jaguar in the template. Isaac explained after the game that he was really concerned that I would just walk her up the board and start lobbing E/M grenades everywhere to take out his bot army and TAG, so he wanted to make sure she was dead.

Fortunately for me, my dice are warming up and I keep making dodge rolls, ARM saves, and guts check moves on both of them until I manage to get the Jaguar back around the corner, away from the template. Isaac smartly stops before he’s too deep into his order pool and lobs one final grenade, killing my Intruder outright and knocking out my Zondbot. That option’s gone for good now. Ah well. Isaac’s MSR Fusilier drops the TR bot, again. UGH. The Pathfinder retreats and the remaining Fugazi shuffles around as the TAG stomps into a position covering my Kriza. Before passing the turn, Isaac throws up Overclock again.

Well, I advance the Uberfall again, because I’m obligated to. The ML Fusilier catches them and crits on an 18! Thankfully, he only catches the Pupniks in the blast. The targeted Pupnik goes down, and I roll an 18 on my dodge with the second and an 11 with the third. As the smoke clears, I’m down two pupniks, but the Chimera is still up, a few inches behind them. Hooray! I pick up the TR bot again and send him into battle against the MSR Fusilier. This time, I crit and shock him off the table. Link broken! Apparently it’s going to take crits to finish this game out, and my dice start delivering them in spades. I spend my Lieutenant order standing the Kriza up and blast away at Isaac’s Squalo. Not only do I net a crit, I’ve got 4 hits!

A few failed ARM rolls (on ARM 11, mind you) later and the Squalo is down for the count. Wow, only one order to drop an Squalo in cover! Go Kriza go! I push the Chimera forward again, dashing her across the opening that the Squalo had been watching. The Chimera and her Pupnik get stunned by some Forward Observers, but that’s fine. I just want to get them closer. Luckily enough, my smoke grenade beats out the Pathfinder’s dual combi-shots as she crosses the gap before getting flash pulsed by the Fusilier FO, so that worked out perfectly. My Spektr can see the ML Fusilier while still prone if he scoots forward a bit, so I do exactly that and rely on my TO to protect me. It pays off and my Spektr knocks out the troublesome trooper. I stand him up to cover the Squalo’s hulk, just in case Isaac has any designs of picking him back up.

I push my TR bot out a little more to cover the central firelane, seeing the Auxilia as I do, and the resulting gunfight forces the Auxilia down the ladder. With that, I pass the turn.

Isaac is a savvy player and activates his Hexa, using her combi rifle to force the Spektr’s head down. She’s on the other side of the shipping container, the one right by Isaac’s dice.

The way clear, Isaac runs the Machinist up the field, using the Squalo as cover. This guy went to PanO’s top engineering school and manages to put two STR back onto the TAG. The Pathfinder runs around to the other side of the cream colored building. I was a bit confused by this, and I assumed it was to cover the Spektr.

The Squalo attempts to gun down my Kriza, but he makes two ARM saves and dives for the dirt, leaving him free to enter suppression.

Isaac informed me he moved the Pathfinder to make the Auxilia’s Auxbot the closest thing to my Chimera. Clever! I’m forced to go that way, but only the Pupnik is close enough. I gun down the Auxbot with the Chimera’s combi-rifle. Isaac declares a whole bunch of other AROs but none of them are effective. Phew! I want to get her into his backfield and start eating Fusiliers, but she doesn’t land a smoke on her next move and dies horribly to lots of combi-rifle fire.

The Pathfinder is watching my Moira, so I just lean on her ODD and gun down the ‘bot, who dodges unsuccessfully. A quick move later, and she’s in range to take on the Squalo. I spend a coordinated order on the Kriza (spearhead), Moira, and Spektr, getting them all into LoF of the suppressing Squalo. Isaac deliberates for a long time, and debating whether or not to dodge. He eventually decides to just have a dice off with the Kriza, 3 dice versus 3 dice.

I light him up, using the Spektr’s AP rounds, the Kriza’s HMG, and the Moira’s E/M LGL. The Spektr whiffs, the Kriza’s bullets bounce off the TAG, and PanO engineering saves the day again–the Squalo’s sophisticated circuitry shrugs of a direct EMP hit. The poor Machinist nearby is also caught in the blast but nothing happens to him other than having his lurid flirtatious texting exchange with the Trauma Doc interrupted.

Aside: I really can’t get over how hilarious the PanO support pack models are. Just look at those faces!

I spend the Kriza’s LT order and roll two crits and a hit on the Squalo, and that’s enough to send it into unconscious level 2. The Kriza is on fire! (Not literally. That would be bad). I push the TR bot up to cover the midfield, killing the Hexa with another crit, and throw four dice at the Squalo, trying to get rid of it. Nothing. The Kriza tries, but ARM 11 is a tough nut to crack. I throw my arms up in frustration before noticing that I’ve got one order left. I spend it on the Spektr and drop the Squalo to ARM 4 with AP rounds… but it doesn’t matter. A critical shotgun slug slags the stationary Squalo’s sophisticated systems. Eh? Eh? 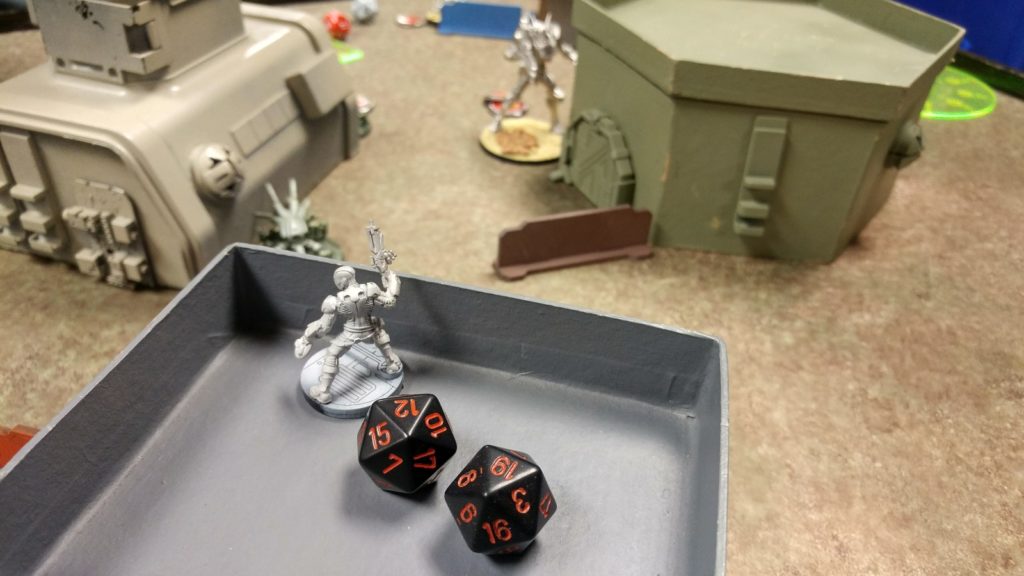 Down a TAG, out of orders and options and with a TR bot covering his deployment zone, Isaac decides to call it so we can go watch the end of a Haqqislam versus USARF game with 3 Devil Dogs on the table. Well, I’d like to say I played well this game, but really my dice did all the heavy lifting for me! I had 232 left on the table, and Isaac had 112. Neither of us bagged the other’s DataTracker, making it a 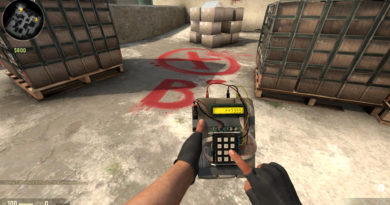 The D-Charge Has Been Planted 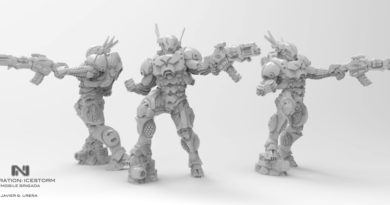